Read Claimed by the Highlander Online

Claimed by the Highlander 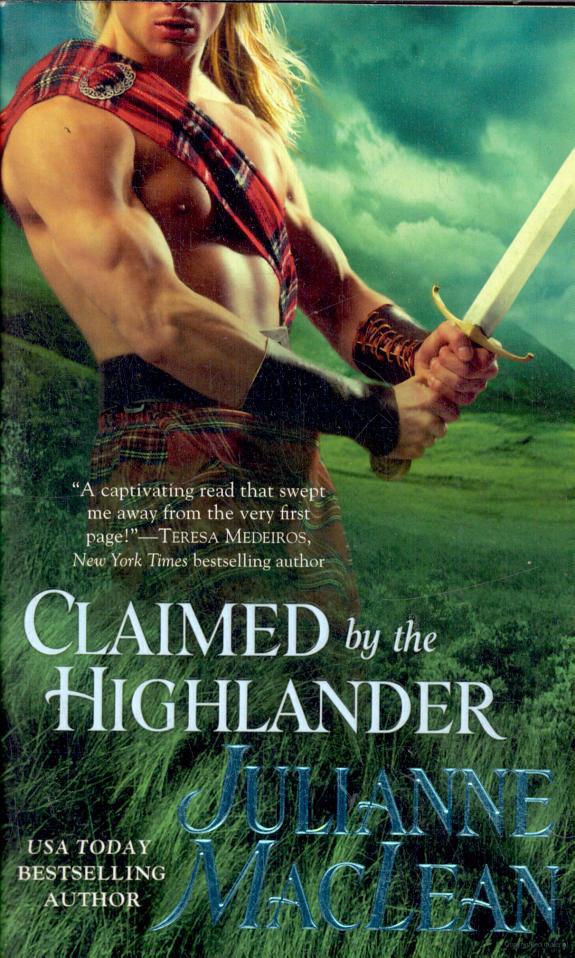 With his tawny mane, battle-hewn brawn, and ferocious roar, Angus "The Lion" MacDonald is the most fearsome warrior Lady Gwendolen has ever seen—and she is his most glorious conquest. Captured in a surprise attack on her father's castle, Gwendolen is now forced to share her bed with the man who defeated her clan. But, in spite of Angus's overpowering charms, she refuses to surrender her innocence without a fight…

With her stunning beauty, bold defiance, and brazen smile, Gwendolen is the most infuriating woman Angus has ever known—and the most intoxicating. Forcing her to become his bride will unite their two clans. But conquering Gwendolen's heart will take all his skills as a lover. Night after night, his touch sets her on fire. Kiss after kiss, his hunger fuels her passion. But, as Gwendolen's body betrays her growing love for Angus, a secret enemy plots to betray them both…

Julianne MacLean delivers a compelling, ravishing historical romance in
Claimed by the Highlander
.

"Love, revenge, redemption…and a sexy Scottish Highlander in a kilt! What more can a reader ask for? Julianne MacLean knows what her audience likes, and once again has delivered a story that abounds with fast-paced action, compelling characters and a soul-baring journey of love." --
Reader to Reader Reviews
on
Claimed by the Highlander

“You can always count on Julianne MacLean to deliver ravishing romance that will keep you turning pages until the wee hours of the morning.”—
Teresa Medeiros

“She is just an all-around, wonderful writer and I look forward to reading everything she writes.”—
Natasha Smith
,
Romance Junkies

From bestselling storyteller Julianne MacLean comes the passionate saga of three Highland warriors sworn to fight for freedom, honor—and the women they love…

With his tawny mane, battle-hewn brawn, and ferocious roar, Angus “The Lion” MacDonald is the most fearsome warrior Lady Gwendolen has ever seen—and she is his most glorious conquest. Captured in a surprise attack on her father’s castle, Gwendolen is now forced to share her bed with the man who defeated her clan. But, in spite of Angus’s overpowering charms, she refuses to surrender her innocence without a fight…

With her stunning beauty, bold defiance, and brazen smile , Gwendolen is the most infuriating woman Angus has ever known—and the most intoxicating. Forcing her to become his bride will unite their two clans. But conquering Gwendolen’s heart will take all his skills as a lover. Night after night, his touch sets her on fire. Kiss after kiss, his hunger fuels her passion. But, as Gwendolen’s body betrays her growing love for Angus, a secret enemy plots to betray them both…

“Passionate romance that will keep you up all night!” —Elizabeth Hoyt,
New York
Times
bestselling author 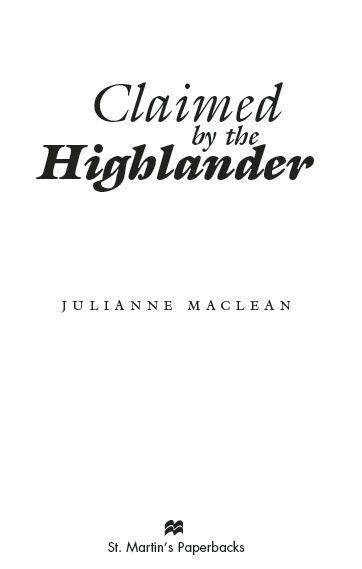 He was banished, and in his absence all was lost. But soon, his time will come. The sleeping lion will wake, and when he does, the MacEwens will hear his roar.

The Western Isles of Scotland

Sneak Peek - Seduced by the Highlander

The dream startled her awake mere minutes before the siege began.

Gwendolen MacEwen sat up with a gasp and turned her eyes to the window.
It was only a dream,
she told herself as she struggled to calm her breathing. Later she would call it a premonition, but for now, she was certain it was just the trickeries of sleep causing this terror in her heart.

Giving up any notion of slumber, she tossed the covers aside, sat up on the edge of the bed, and reached for her robe. She slipped it on for warmth against the predawn chill as she rose to her feet and padded to the window, lured to the leaded glass by a faint glow of light on the horizon.

A new day had begun. At last. She closed her eyes and said a silent prayer that it would bring her brother, Murdoch, home from his travels. The MacEwens needed their chief, and if he did not soon return and claim his birthright, she feared someone else would—for there had been some talk of discontent in the village. She’d heard it from her maid, whose sister was married to the alehouse keeper. And after the dream she’d just had …

The horn blew suddenly in the bailey.

Unaccustomed to hearing such a clamor while the castle still slept, Gwendolen turned from the window.
What in God’s name…?

It blew again, a second time. Then a third.

A spark of alarm fired her blood, for she knew the meaning of that signal. It was coming from the rooftop, and it spoke of danger.

Gwendolen rushed to the door, flung it open, and hurried up the tower stairs.

“What’s happening?” she asked the guard, who was pacing back and forth through the early morning chill. She could see his ragged breath upon the air.

He pointed. “Look there, Miss MacEwen!”

She rose up on her toes and leaned out over the battlements, squinting through the dim morning light at the moving shadows in the field. It was an advancing army, approaching quickly from the edge of the forest. Some were on foot, others mounted.

She stepped away from the wall and regarded him soberly. “How much time do we have?”

She turned and locked eyes with another clansman, who exploded out of the tower staircase with a musket in his hands. He halted, panic-stricken, when he spotted her.

“They came out of nowhere,” he explained. “We’re doomed for sure. Ye should escape, Miss MacEwen, before it’s too late.”

Immediately incensed, Gwendolen strode forward, grabbed two fistfuls of his shirt, and shook him roughly.
“Repeat those words again, sir, and I will have your head!”
She swung around to face the other clansman. “Go and alert the steward.”

They had no leader. Her father was dead, and their current laird of war was a drunkard who was not even within the castle walls, for he’d been spending his nights in the village since her father’s passing. Her brother had not yet returned from the Continent. They had only their steward, Gordon MacEwen—who was a brilliant manager of books and numbers, but no warrior.

“Is your weapon loaded?” she asked the flustered clansman. “Do you have enough powder?”

“Then take aim and defend the gate!”

He hurried into position, while she looked out over the bailey below, where her clansmen were finally assembling in answer to the call. Torches had been lit, but everyone was shouting in confusion, asking too many questions.

“MacEwens, hear me now!” she shouted. “An army is approaching from the east! We will soon be under attack! Arm yourselves and man the battlements!”

Only in the hush of that moment, as all eyes turned toward her, did she realize that she was still wearing her dressing gown.

“You there!”
She pointed at a boy. “Arm yourself with a sword! Assemble all the women and children. Take them to the chapel, bar the doors, and stay with them until the battle is ended.”

The boy nodded bravely and dashed off to the armory.

“They are MacDonalds!” a guard shouted from the opposite corner tower. It was Douglas MacEwen, a good friend and able swordsman.

Gwendolen gathered her shift in her hands and ran to meet him. “Are you certain?”

“Aye, look there.” He pointed across the field, now shimmering with mist and morning dew. “They carry the banner of Angus the Lion.”

Gwendolen had heard tales of Angus MacDonald, forsaken son of the fallen MacDonald chief, who had once been Laird of Kinloch. He had been a Jacobite traitor, however, which was why the King granted her father Letters of Fire and Sword, which had awarded him the right to take the castle in service to the Crown.

There were whispers that Angus was the infamous Butcher of the Highlands—a renegade Jacobite who hacked entire English armies to pieces with his legendary death axe.

Others said he was nothing but a treacherous villain, who was banished to the north by his own father for some secret, unspeakable crime.

Either way, he was reputed to be a fierce and ruthless warrior, faster and more ferocious than a phantom beast on the battlefield. Some even said he was invincible.

This much was true at least: he was an expert swordsman, who showed no mercy to warriors and women alike.

“What in God’s name is that?” She leaned forward and squinted, as a terrible sense of foreboding poured through her.

Douglas strained to see clearly through the mist, then his face went pale. “It’s a catapult, and their horses are pulling a battering ram.”

She could hear the heavy, muted thunder of their approach, and her heart turned over in her chest.

Hard Case V: Blood and Fear (A John Harding Novel Book 5) by Bernard Lee DeLeo
Voices of Chaos by Ru Emerson, A. C. Crispin
Call Down Thunder by Daniel Finn
The Art of Acquiring: A Portrait of Etta and Claribel Cone by Mary Gabriel
Surrender by Angela Ford
The Secret Life of a Slummy Mummy by Fiona Neill
Vicki & Lara by Raven ShadowHawk
Chase by Flora Dain
Beauty by Louise Mensch
Highly Strung by Justine Elyot
Our partner