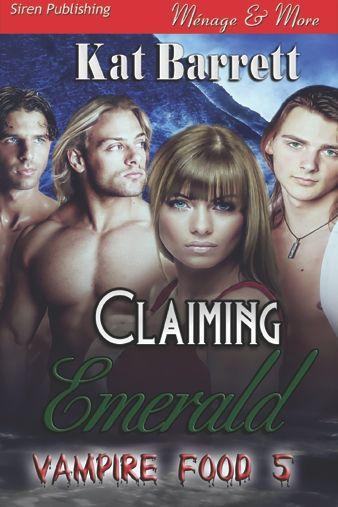 Emerald Slade is enjoying her life with Rory Laroche, Sylvester "Salt" Angelicas Lancaster Trantono, and the shifter Russell Cane. Winter is raging around them and the power sources at her fortress are failing. When Em is charred by the sun, she may be forced to give up everything and become the mate of the Vampire governor who once spared her life.

Vidar is cordial and kind during the night, but during the day, he torments Em’s dreams, leaving her in an ever-growing state of arousal. The governor's caves are magnificent, and Vidar shows Em that she can again walk in the sun, in the protected gardens on the upper floor. Everything is far more alluring than reality, and when Em returns to her own fortress, she discovers that Vidar’s world is but a grand illusion.

With the knowledge that Vidar will come for her again, Em fights to regain her life with the three men that she loves.

If you have purchased this copy of
Claiming Emerald
by Kat Barrett from BookStrand.com or its official distributors, thank you. Also, thank you for not sharing your copy of this book.

This is Kat Barrett’s livelihood.
It’s fair and simple. Please respect Ms. Barrett’s right to earn a living from her work.

Thanks to my good friends Sandra and Dawn, who support and encourage me to continue writing.

I have to admit, though, that I love to write and see what happens as the story progresses. No, I never know in advance, and usually when I think I know, it takes a turn and goes elsewhere.

Thanks also have to go out to my husband, who finds other things to do as I sit at the computer typing.

To you, my fans, I enjoy your feedback, and without you, I would be writing for only my own amusement. Thank you.

I have to make a note here that I’m having a lot of fun with this series and hope to continue it for a few more books at least. Hope you enjoy it.

Em opened her eyes, groaning. Russell was curled up on top of her body, his fur tickling her nose. He was shivering badly. Although her body was vampire cold, he insisted that she reflected his body heat back rather than stealing it from him. He disliked sleeping above with the humans. Two of the single women had eyes for him, even if he had clearly stated that he only wanted to be with Em.

Em shook him. “Russell,” she said softly, not wanting to disturb Salt or Rory. He opened his amber eyes to stare at her. “Get up and get the quilt.”

He stood up, his paws pressing painfully into her breasts before he took a few steps back and turned to jump off the bed. Em had no idea why he didn’t just remain in human form long enough to get the quilt for himself, but most of the time he didn’t. Russell stood and waited for her to get up. He was shivering badly. Em wondered if he was ill or it was honestly that cold. There was heat out in the kitchen to keep the pipes from freezing, but there was none in the vampire area. They didn’t need heat. Although she could feel hot and cold, the weather never bothered her. From what Rory and Salt said, it didn’t bother them either.

She slid off the bottom of the bed and retrieved the two quilts from the chest. They rarely used them for anything more than something to cover their bodies. She had two or three men to cuddle between, and they were much cozier than a quilt. Em folded the two heavy quilts together and then climbed back into bed with them.

Russell walked back over her and sat on her legs, waiting as she covered him with the quilt and lay down. Russell immediately lay back on top of her, snuggling into her chest as she pulled the fabric over him. She stroked his silky head, listening as his breathing calmed and the shivering stopped. Russell had proven himself a very devoted and loving man over the last eight months. He didn’t try to compete with Rory or Salt, but rather complimented their relationship. He was as funny and intelligent as Rory and Salt, so he didn’t get left in the dark with their comical antics or intense conversations. He enjoyed the outdoors as much as they did and was always willing to help the humans when he could. Russell was not afraid of hard work, and he was always willing to listen to an alternate opinion. She enjoyed having him in her bed, not only because he was a very good lover, but because the temperature of his dick was so inhumanly hot. To sleep with him was like having a private, breathing teddy bear.

She wondered about the weather if it was bad enough for Russell to come down and sleep during the daytime. The snow had been falling heavy when they headed downstairs, and she figured that it was bitter cold. Personally, Em had loved it. She had gone running with Rory and Salt. They had stripped off their clothing, enjoying the snow stinging their skin as they ran. It was similar to running in the rain, but the snow was cold, where the rain always felt warm or hot.

Russell ran with them occasionally. He would shift into a cheetah and they would keep their pace slower so he could keep up. Russell, however, would get tired from the run, whereas a vampire didn’t.

Em’s mind drifted to the humans above. This was the fifth winter since the sonic had fallen and flattened the world. This winter so far had been worse than the others. The vampires had gone hunting for more coats and warmer clothing for the humans. With the snow, the humans were having trouble moving about outside the gates of the fortress. Inside the gates, they kept the ground shoveled as best they could.

The four largest houses were used for any who came in from the outside. They were equipped with central fire pits that would keep the rooms toasty and warm. All the other individual homes had either fireplaces or heaters that ran off solar. The problem now was that with all the snow, the solar units weren’t charging to capacity. They were using the backup generators, and every night the vampires had taken turns to go up onto the roof of the fortress to keep the snow cleared. The humans did it during the day, but the roof had become treacherously slippery. They had been pulled from their day’s sleep six different times already to heal someone with a broken bone or other severe injury. It was their way of giving back. For them to give a bit of blood to help heal a human was the least they could do. The humans gave their blood to the five older vampires two or three times a month. Salt was a different story. He had only been turned eight months before and he needed to eat at least every other night. His hunger was dwindling, though. Where he used to need two or three humans to sate his demanding flesh, now he was only feeding off one.

Their count had risen to sixty-seven adults and six children. She had a suspicion that some of them had come from the Purists camp after they had been disbanded. Em wasn’t sure, but so far they hadn’t been a problem.

She was stroking Russell’s fur incessantly in thought. Without warning, he shifted back into human form. “I’m sorry that I woke you.”

Rory grunted and Em turned her head to face him. He had one eye open, glaring at her, as was his habit when disturbed by something nonthreatening. “Okay. The fur ball in the bed is fine, but do you have to have a chat?”

Em smiled. “Sorry. I didn’t realize you were sleeping so softly.”

Rory groaned and leaned up on his elbow. “I think it’s the weather. Is it still snowing, Russell?”

“Yes. Very hard. It’s so cold up there. That’s why I’m down here. I had to shovel the outer doors to get them open. I’m glad we took the time to build an overhang over the stairs. If we still had the flat basement doors, we wouldn’t get out.”

“We would get out. If worse came to worst, we could go through the garage.”

“I didn’t think of that. Is the exit even passable?”