Clarence Darrow: Attorney for the Damned 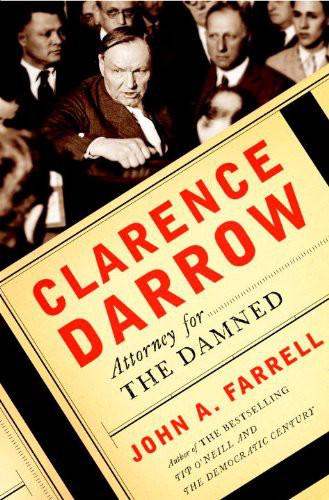 ALSO BY JOHN A. FARRELL

Tip O’Neill and the Democratic Century

All rights reserved. Published in the United States by Doubleday,
a division of Random House, Inc., New York,
and in Canada by Random House of Canada Limited, Toronto.

DOUBLEDAY
and the portrayal of an anchor with a dolphin
are registered trademarks of Random House, Inc.

This page
constitutes an extension of this copyright page.

Portions of this work were previously published in
American History
.

Excerpts from
The Story of My Life
by Clarence Darrow reprinted
by permission of the Darrow family, all rights reserved.

To Caitlin and John

CHAPTER 16
All That Jazz

Some rude awakening must come
.

C
larence Darrow, sitting at his desk in the law offices of the Chicago & North Western Railway
Company on an April morning in 1893, had much to be pleased about. In the six years since he arrived in Chicago, he had carved a fine niche. The mayor and governor asked his advice. The newspapers covered his speeches. He had taken a real estate dispute to the Illinois Supreme Court and won his client a $500,000 award that, so large for its time, got front-page attention. He had a pleasant house, a proper wife, influential friends, and a son he loved. As first assistant counsel to a mighty railroad, he had a salary and social standing to be envied by the city’s glut of aspiring lawyers: dire, sepulchral figures, languishing in the courts, longing for the stroke of fortune that would land them such a choice position.
1

Darrow had just turned thirty-six. He was a tall man for his time, with high cheekbones and a formidable brow that could give him the look of a young Lincoln: no disadvantage in Illinois. His eyes were a soft blue and his smile, a law partner would recall, was “wreathed in good nature and irresistible charm.” He had a kind of rough charisma that, he was discovering, charmed the pretty girls who attended his talks and lectures.
2

Small-town Ohio could not hold him and so he had come to Chicago, to the flickering gaslight, the smoke and cinder, the clamor and hoot and honk of that most American city. He had applied himself, in the courts by day and by making the rounds of political clubs and debating societies in the evenings. And he had sought as mentors rich and famous men, and had prospered from their interest. If Darrow sought a template for success,
he needed look no further than his boss and patron, the railroad’s general counsel, whose office was next to his in the law department at Fifth Avenue and Lake Street, in downtown Chicago.

William C. Goudy was a trailblazer in a new specialty of the industrial age: the “corporation lawyer.” With his bearded chin and stern demeanor, Goudy looked like an Amish elder, and though friends insisted that he had a warm heart, he was cold and direct in his professional affairs. He was said to be a millionaire, and Darrow knew him as “ultra conservative.”
3
As a chieftain of the Illinois “silk-stocking” Democrats, Goudy served as an adviser to President
Grover Cleveland, who had just been elected to a second term, and who shared his corporate sympathies. “No harm shall come to any business interest as the result of administrative policy so long as I am President,” Cleveland boasted. Goudy was a close friend, as well, of Chief Justice
Melville Fuller, a Chicagoan who led the era’s notoriously conservative Supreme Court, known for decisions shielding monopolies and trusts, outlawing the income tax, and, in the infamous
Plessy v. Ferguson
, authorizing racial segregation.
4

In the
Gilded Age, when the interests of politicians and industrialists ran in tandem—or could be made to do so with a timely payoff—Goudy’s political ties enhanced his appeal to the clients who secured his services. He represented the Vanderbilt railroad empire, the great Armour meatpacking firm, and other powerful interests in their wars against government regulation. It was said that Congress passed the Interstate Commerce Act in part to counteract Goudy, who so ably promoted the rights of corporations and monopolists to run their affairs as they saw fit, without regard to the public interest.
5

Goudy and the railroad were, this day, engaged in one such battle with the people of Chicago. That great midway between the crops and natural resources of the West and the markets and capital of the East was a wicker of railroad tracks. Five million engines and freight cars passed through Chicago each year, on 1,400 miles of rails. As the city’s population leaped, so did the number of those killed and injured by trains traversing its roads and alleys at the thousands of street-level crossings. It was Darrow’s duty to represent the railroad in court, fighting to limit the compensation sought by the victims or their families.

The carnage was ghastly. “A stranger’s first impression of Chicago is that of the barbarous gridironed streets,” a British visitor wrote, “his
second is that of the multitude of mutilated people … the mangled remnant of the massacre.” In a single month that spring, there were forty-five deaths. One story suffices, that of the mother driving home, who froze at the roar of an approaching train. A passerby pulled her from the driver’s bench, but her two young daughters were left behind to be shattered and tossed in the shards of the carriage as their wounded horse bellowed in pain.

But the railroads were tough, and abetted by public officials who collected “lavish bribery … year after year,” the
Chicago Times
reported. When, finally, the city council voted to compel the railroads to raise their tracks, the companies went to court. “There is no power on earth which can compel us to elevate our tracks,” said a confident
Marvin Hughitt, the president of the Chicago & North Western. “The opinions of the best lawyers in the country have been obtained.” A test case was pending at the Supreme Court, and earlier that month Goudy had traveled to Washington to speak to the chief justice and visit with his allies at the White House. He returned to Chicago cheered about his company’s prospects.
6