Authors: The Other Side of the Sky 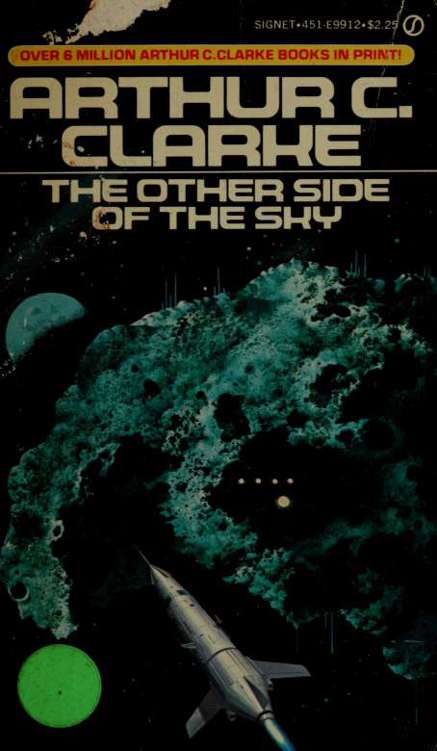 The Other
Side of the Sky

The
Nine Billion Names of God

The Other Side of the Sky

The Wall of Darkness

Venture to the Moon

Out of the Sun

The Songs of Distant Earth

These stories were written during the period
1947-1957, and with the three earlier collections, Expedition to Earth, Reach
for Tomorrow, and Tales from the White Hart, complete the roster of my
pre-Space Age fiction.

I have thrice—to my knowledge, that is—written
stories based on ideas provided by someone else. My friends will testify that I
am too sober a person to have imagined “No Morning After," which was due
to A. H. Smith, while "All the Time in the World" springs from the
multifarious talents of Mike Wilson. In 1953, I turned the latter tale into a
television play, which was broadcast over the American Broadcasting Company
network. Since then I have avoided any permanent entanglements with TV, though
a purely social contact with the late 'Captain Video" was undoubtedly
responsible for "Security Check."

“The Nine Billion Names of God" was the
product of a rainy afternoon in
New York
; Professor J. B. S. Haldane once challenged
the mathematical basis of the title, but ifs still a nice number.

"Refugee," to the utter confusion of
indexers, was first published by Anthony Boucher in The Magazine of Fantasy and
Science Fiction as "?," since he found my original title unsatisfactory
and promptly started a competition to find a better one, finally settling upon
"This Earth of Majesty." To add to the chaos, Ted Camell, in the
British magazine New Worlds, called it "Royal Prerogative."

“The Star" has a somewhat unusual history.
In 1954, Carl Biemiller of
Holiday
magazine asked me to write an astronomical article, which I tackled with some
reluctance because it involved a considerable amount of research (i.e., work).
It proved well worth it, however, because after publication in
Holiday
the piece concerned—whose title I won’t
mention, because it would give away the plot—was picked by Reader’s Digest.
Then the London Observer announced a short-story competition on the subject
“2500 ad," and I realized that I had a theme already to hand. The story
was written in a state of unusually intense emotion; needless to say, it wasn't
even placed among the "also rans.” As some compensation, however, on its
eventual magazine appearance “The Star” was voted the best science-fiction
story of 1956.

"Venture to the Moon” also has an unusual
genesis. It was written as a series of six independent but linked stories for
the London Evening Standard, and when the conmiission was first proposed I
turned it down. It appeared impossible to write stories in only 1,500 words
which would be understandable to a mass readership despite being set in a
totally alien environment, but on second thought this seemed such an
interesting challenge that I decided to tackle it The resulting series was
successful enough to demand a second, "The Other Side of the Sky,” which
by good luck speared on the London newsstands just when Sputnik I appeared in
the sky.

The short story "Take a Deep Breath” has
been strongly criticized because of its suggestion that an unprotected man
could survive in the vacuum of space. Experiments with dogs and chimpanzees
(which have suffered no ill-effects after three minutes in vacuum) have now
completely validated this idea. Stanley Kubrick later used it in one of the
most dramatic sequences from 2001: A Space Odyssey.

I must admit that "The Starting Line” has
already been bypassed by history; there will probably be Russians and Americans
on the moon before the first Englishman gets into orbit But “Watch This Space”
describes a phenomenon now seen by millions of people along the eastern
seaboard of the United States; only a few days ago I watched a glowing flower
of light unfold in the Washington sky, as one of the Wallops Island research
rockets dumped a few pounds of barium into the ionosphere. So it is doubtless
now only a matter of time before the advertising agencies move into space. . .
.

The Nine Billion Names of God

'This is a slightly unusual request,' said Dr Wagner, with what he hoped was
commendable restraint. 'As far as I know, it's the first time anyone's been
asked to supply a Tibetan monastery with an Automatic Sequence Computer. I
don't wish to be inquisitive, but I should hardly have thought that your - ah -
establishment had much use for such a machine. Could you explain just what you
intend to do with it?'

'Gladly,' replied the lama, readjusting his silk robes and carefully putting
away the slide rule he had been using for currency conversions. 'Your Mark V
Computer can carry out any routine mathematical operation involving up to ten
digits. However, for our work we are interested in letters, not numbers. As we
wish you to modify the output circuits, the machine will be printing words, not
columns of figures.'

'I don't quite understand…'

'This is a project on which we have been working for the last three
centuries - since the lamasery was founded, in fact. It is somewhat alien to
your way of thought, so I hope you will listen with an open mind while I
explain it.'

'It is really quite simple. We have been compiling a list which shall
contain all the possible names of God.'

'I beg your pardon?'

'We have reason to believe,' continued the lama imperturbably,' that all
such names can be written with not more than nine letters in an alphabet we
have devised.'

'And you have been doing this for three centuries?'

'Yes: we expected it would take us about fifteen thousand years to complete
the task.'

'Oh,' Dr Wagner looked a little dazed. 'Now I see why you wanted to hire one
of our machines. But what exactly is the
purpose
of this project?'

The lama hesitated for a fraction of a second, and Wagner wondered if he had
offended him. If so, there was no trace of annoyance in the reply.

'Call it ritual, if you like, but it's a fundamental part of our belief. All
the many names of the Supreme Being - God, Jehova, Allah, and so on - they are
only man-made labels. There is a philosophical problem of some difficulty here,
which I do not propose to discuss, but somewhere among all the possible combinations
of letters that can occur are what one may call the real names of God. By
systematic permutation of letters, we have been trying to list them all.'

'I see. You've been starting at AAAAAAA… and working up to ZZZZZZZZ…'

'Exactly - though we use a special alphabet of our own. Modifying the
electromatic typewriters to deal with this is, of course, trivial. A rather
more interesting problem is that of devising suitable circuits to eliminate
ridiculous combinations. For example, no letter must occur more than three
times in succession.'

'Three is correct: I am afraid it would take too long to explain why, even
if you understood our language.'

'Luckily, it will be a simple matter to adapt your Automatic Sequence
Computer for this work, since once it has been programmed properly it will
permute each letter in turn and print the result. What would have taken us
fifteen thousand years it will be able to do in a hundred days.'

Dr Wagner was scarcely conscious of the faint sounds from the
Manhattan
streets far below. He was in a different world, a world of natural, not
man-made, mountains. High up in their remote aeries these monks had been
patiently at work, generation after generation, compiling their lists of
meaningless words. Was there any limit to the follies of mankind? Still, he
must give no hint of his inner thoughts. The customer was always right…

'There's no doubt,' replied the doctor,'that we can modify the Mark V to
print lists of this nature. I'm much more worried about the problem of
installation and maintenance. Getting out to
Tibet
,
in these days, is not going to be easy.'

'We can arrange that. The components are small enough to travel by air -
that is one reason why we chose your machine. If you can get them to
India
,
we will provide transport from there.'

'And you want to hire two of our engineers?'

'Yes, for the three months that the project should occupy.'

'I've no doubt that Personnel can manage that.' Dr Wagner scribbled a note
on his desk pad. 'There are just two other points -'

Before he could finish the sentence the lama had produced a small slip of
paper.

'This is my certified credit balance at the Asiatic Bank.'

'Thank you. It appears to be - ah - adequate. The second matter is so
trivial that I hesitate to mention it - but it's surprising how often the
obvious gets overlooked. What source of electrical energy have you?'

'A diesel generator providing fifty kilowatts at a hundred and ten volts. It
was installed about five years ago and is quite reliable. It's made life at the
lamasery much more comfortable, but of course it was really installed to
provide power for the motors driving the prayer wheels.'

'Of course,' echoed Dr Wagner. 'I should have thought of that.'

The view from the parapet was vertiginous, but in time one gets used to
anything. After three months, George Hanley was not impressed by the
two-thousand-foot swoop into the abyss or the remote checkerboard of fields in
the valley below. He was leaning against the wind-smoothed stones and staring
morosely at the distant mountains whose names he had never bothered to
discover.

This, thought George, was the craziest thing that had ever happened to him.
'Project Shangri-La', some wit back at the labs had christened it. For weeks
now the Mark V had been churning out acres of sheets covered with gibberish.
Patiently, inexorably, the computer had been rearranging letters in all their
possible combinations, exhausting each class before going on to the next. As
the sheets had emerged from the electromatic typewriters, the monks had
carefully cut them up and pasted them into enormous books. In another week,
heaven be praised, they would have finished. Just what obscure calculations had
convinced the monks that they needn't bother to go on to words of ten, twenty,
or a hundred letters.