Read Clash of the Otherworlds: Book 1, After the Fall Online

Clash of the Otherworlds: Book 1, After the Fall 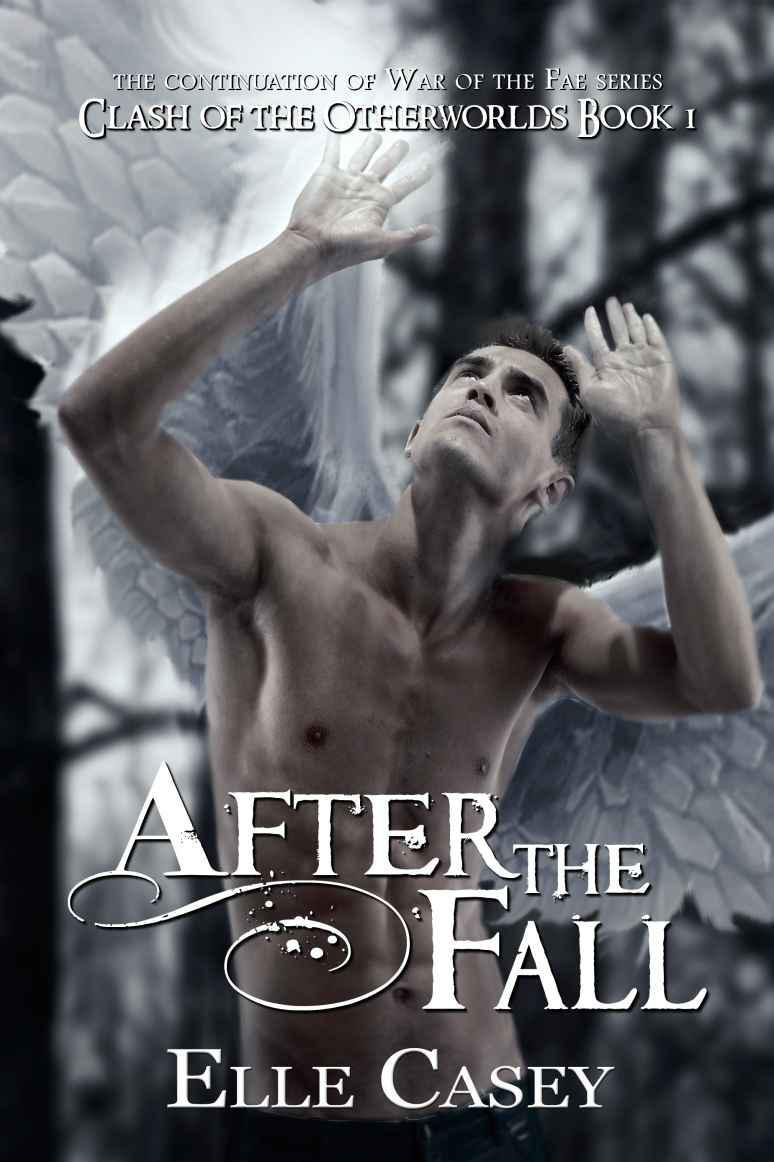 Clash of the Otherworlds

War of the Fae: Book One, The Changelings

War of the Fae: Book Two, Call to Arms

For Elena.  The beautiful girl who stole my boy's heart.

I do believe I see more than a little bit of Jayne in you, love.

© 2012 Elle Casey, all rights reserved, worldwide.  No part of this ebook may be reproduced, uploaded to the Internet, downloaded from the Internet, or copied without author permission.  If you did not pay for this ebook or receive it via a free, author-authorized promotion directly through Amazon, you are in violation of this copyright, and the author respectfully asks that you please support artistic expression and help promote anti-piracy efforts by buying a copy of this ebook at
www.Amazon.com
or at the Amazon outlet that serves your country.

Elle Casey thanks you deeply for your understanding and support.

I RETURNED FROM EATING LUNCH in the dining hall of the Light Fae compound and stood at the entrance of my room, my eyes not really seeing the stone walls and floors or the stark but serviceable wood furniture.  Instead, I daydreamed.  Reminiscing for a brief moment about the times I had spent inside it, talking and laughing with my friends and contemplating the ways of the fae world with my roommate, Tim, pixieman extraordinaire.

I'd lived here for a couple of months as a newly-made fae elemental - a human girl turned changeling, recruited by the Light Fae to join their cause and save the fae world from certain destruction.  Nothing had changed, really.  At least not in this room.  It looked exactly the same as it had the last time I'd been in it.  But everything about
me
was different.  I was no longer the girl who had stayed in this small, dark place wondering where I fit in and what my purpose in life would be.
That
had recently been made abundantly and painfully clear.

I sighed, stepping inside and pulling my cloak off my back, throwing it down on the bed.  Its shimmering only stopped when the material finally quit moving.  I heard a buzzing coming from the hallway and sighed.
And here he is, Mr. Sassypants, himself.

"Jayne!" yelled the tiny voice that belonged to my roommate.  "Aren't you packed yet?"

"No, I just got here," I said, irritated at the unspoken admonishment carried with his words.  He knew I'd been hung up talking to well-wishers, and was just harassing me because it was his favorite thing in the entire world to do.  I had wondered earlier if having his wife and son around would change anything about him, but so far, no such luck; he was still a pain in my ass.  Of course, it hadn't even been a full day since they'd been reunited -or in the case of his son, introduced- so there was still hope.

"Well, you'd better hurry up," he said slyly.  "Your boyfriend's waiting for you."

I tried to control the red heat of embarrassment that climbed up my neck to burn my cheeks and ears, but it was impossible.

Tim came flying over from behind me and got right up in my face.  "Are you scared?  Do you need me to tell you about the birds and the bees?  Do you want to know where babies come from?"

I tried to catch him but he flew out of my reach.  He was tricky like that.
Little bastard.

His maniacal laughter bubbled out of him.  "I am
so
happy right now, you have no idea."

"Trust me, I'm getting the idea.  Did Abby pixilate you, or what?"

"Is that code for something?" asked Tim, waggling his eyebrows at me while biting the tip of his tongue.

He was almost near enough for me to grab.  I tried to act harmless while at the same time willing him silently to come closer.  I had some serious onion breath from lunch, and I had no qualms about suffocating him with it.

"No, it's not code, perv.  I'm wondering if she zapped your big butt with some pixie dust or whatever.  I'm not used to seeing you so ... frisky."

"This is the
new
me, Jayne.  The new Tim.  The new and improved Tim.  Twenty-five percent more Tim, free.  Tim the terrific.  Tim the fabulous.  Tim the ..."

"Tim the wingless pixie, if he doesn't shut the hell up for two minutes so I can talk to him about something that matters."

Tim frowned, silently scolding me while he flew over to his bed.  Once there, he sat down and crossed his legs, lacing his fingers together over his knees.  "I'm all ears.  Let's talk about important stuff.  I'm ready.  Let's do this.  Fire away.  Let 'er rip."

I glared at him.

He gave me an arrogant sniff and then pantomimed zipping his lips, locking them closed, and throwing away the key.

"What I wanted to know is whether you're coming with me or if you have your own place now.  With Abby or whatever."  I didn't want to admit that I wasn't looking forward to losing him as a roommate.
Yes
, he was annoying a lot of the time.
Yes
, he had intestinal problems and wasn't shy about sharing.  But he'd been incredibly loyal to me since I'd saved him from bell jar imprisonment months ago, and we'd become sort of a team.  Tim hadn't replaced Tony as the best friend of my heart, but he was special, nonetheless - kind of like a bonus best friend, in a way.

Tim started bobbing his head all over and gesturing with his hands as if he were answering me but with his mouth closed.  I could tell by the goofy look on his face that he was totally killing himself with his comedy routine.

I decided to play along.  "Yes, that's what I thought.  Okay, so I'll tell Dardennes that you want to room with Leck, then.  That should be fun.  You can fart in his face while he sleeps, and he can melt your brain and drink it out of your ear for breakfast.  Cool."  I turned as if to leave and transmit the message, but I didn't get far before Tim was all up in my grill again.  He could fly really fast when properly motivated.

"No, you know it wasn't.  Why are you being such a party-pooper, anyway?  Of course I'm still rooming with you.  As long as you don't mind my lady friend and the fruit of my loins joining us."

"Fruit of your loins?
Gah,
do you happen to have a barf bag I could use?"

"I'll have you know that the fruit of my loins? ... It's passionfruit, baby.
Passionfruit."

"More like fruit loops," I mumbled as I walked over to the dresser.

"Oh, nothing.  Come on.  We have to pack."  I was already feeling a little bit better.  Teasing Tim always did that for me.

Once the Light and Dark Fae councils had come together and voted to have all of the fae join forces and become one big, happy family, they determined that in order for the integration to have any chance of success, the fae would need to learn to live together.  Starting today.  Tim and I weren't the only ones getting our lives turned upside down.

"Do you know where our new room is?" I asked.

"No, I'm serious.  A terrace and everything.  Abby's already there getting flowers put in."

"Yeah.  Pixie chicks loooove flowers.  They're only truly happy when they're covered in pollen.  Abby looks good in pollen too, I have to admit."

"Huh.
Learn something new every day."  I opened up the top drawer of my dresser and grabbed all the tunics out and threw them on the bed.  "So, what's the deal with the room?  How'd we score such a sweet pad?"   I opened up the next drawer and pulled the jeans from inside, adding them to my pile.

"You're kidding, right?  You're our Mother.  Of course they're not going to put you in a changeling room.  Don't be ridiculous."

I could hear Tim's feeling-pretty-proud-of-himself tone, which told me more than his words had.  Ever since I'd been officially recognized as the long-awaited Mother of the fae species, Tim had taken on the self-appointed title of His Pixieness and all the royal attitude to go with it.  It didn't matter one bit that the title was his own invention and meant absolutely nothing to anyone but him.

"What about Ben?  Where's he staying?"  I asked with feigned casualness, almost afraid to hear Tim's answer.
Please don't let it be with me
.

Ben had been my arch enemy for months, especially when I had thought he was trying to steal my best friend Tony away from me while I was here learning about being fae and Tony was still in Florida living a regular human life.  Eventually, I came to realize that I had been wrong about Ben.  He was flawed and had done some stupid shit in his zeal to save his people, but he wasn't the evil monster I had once thought he was.

I could hardly hold Ben's mistakes against him, since I'd made plenty of my own, but that didn't mean I was ready to have him overwhelming my life.  And I knew he was the type of guy who could do that very easily.  He was an elemental too, like me; but he was tied to Fire and Wind, where I was tied to Earth and Water.  He was pretty friggin intense, and he'd already told me how attractive he thought I was.  It made me nervous just thinking about it.

My emotions where he was concerned were tied up in knots.  I wanted to distance myself from him to make it easier to figure things out, but the kiss we'd shared during our binding ceremony made that impossible.  Even when he was far, he was still close because I couldn't stop thinking about him.  Somehow, he'd made the loss of Chase, my guardian angel and former number one object of lust, easier to bear.  I sighed heavily, wondering if my future was going to be any easier to figure out than my past.

"He's staying in the room attached to ours.  There's a door connecting them, so don't worry; when you guys want to get busy, you can just go in his room and you'll have complete privacy."

I snorted.  "Please.  You don't need to worry about that, trust me."

"I don't know, Jayne.  I saw the lip lock, you know.  That binding ceremony got pretty hot for a few seconds there, and it wasn't just Ben's element firing it up, either."

The heat began to rise in my face again.  My chest was probably getting blotchy, too.  My traitor emotions were giving me away, once again.  "I was caught up in the moment, okay?  I know we're ... bound or whatever.  But that doesn't mean we're married or anything."