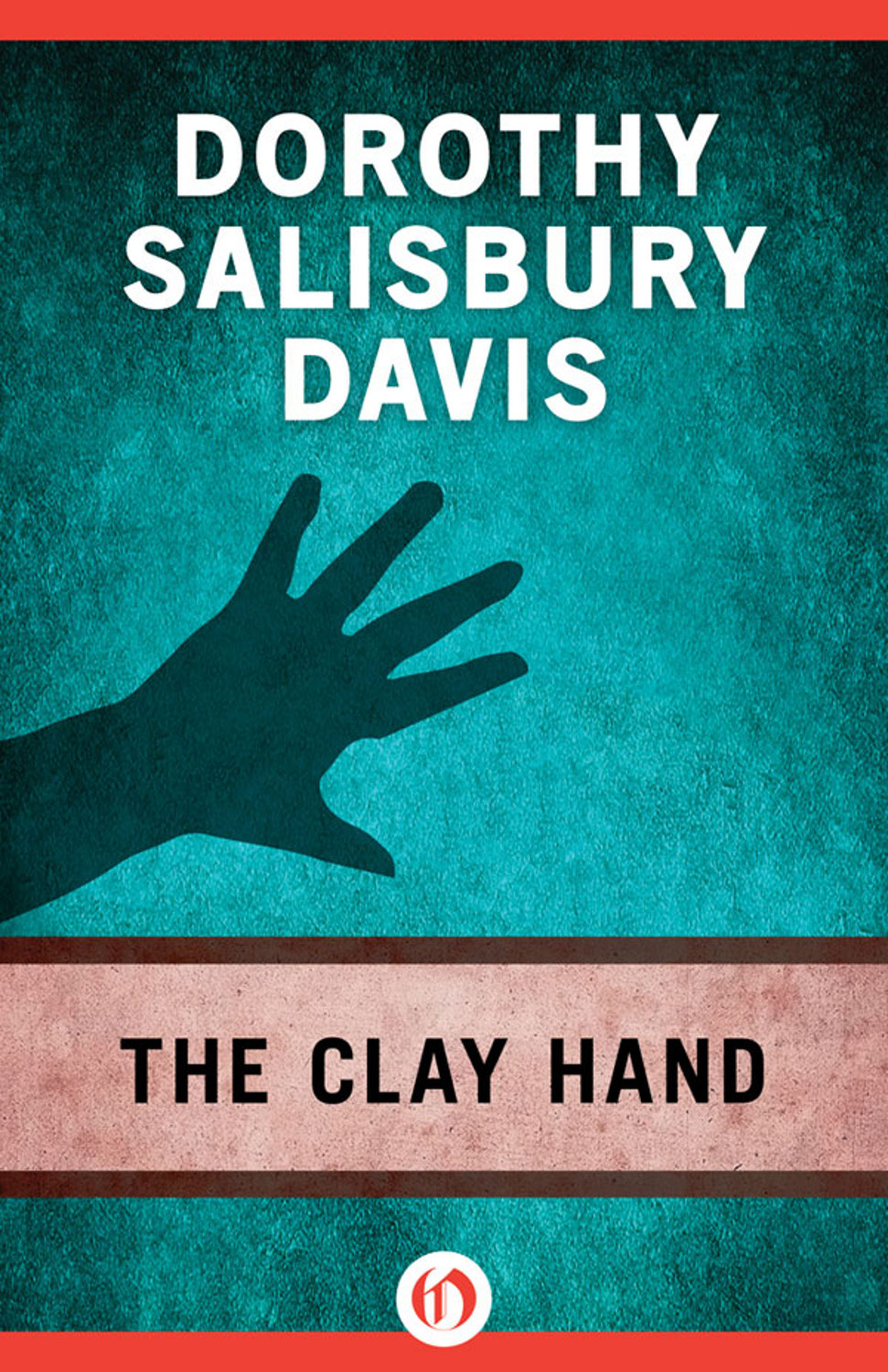 PRAISE FOR THE WRITING OF DOROTHY SALISBURY DAVIS

“Dashiell Hammett, Raymond Chandler and Josephine Tey … Dorothy Salisbury Davis belongs in the same company. She writes with great insight into the psychological motivations of all her characters.” —
The Denver Post

“Dorothy Salisbury Davis may very well be the best mystery novelist around.” —
The Miami Herald

“Davis has few equals in setting up a puzzle, complete with misdirection and surprises.” —
The New York Times Book Review

“Davis is one of the truly distinguished writers in the medium; what may be more important, she is one of the few who can build suspense to a sonic peak.” —Dorothy B. Hughes,
Los Angeles Times

“A joyous and unqualified success.” —
The New York Times
on
Death of an Old Sinner

“An intelligent, well-written thriller.” —
Daily Mirror
(London) on
Death of an Old Sinner

“At once gentle and suspenseful, warmly humorous and tensely perplexing.” —
The New York Times
on
A Gentleman Called

“An excellent, well-controlled piece of work.” —
The New Yorker
on
The Judas Cat

“A book to be long remembered.” —
St. Louis Post-Dispatch
on
A Town of Masks

“Mrs. Davis has belied the old publishing saying that an author’s second novel is usually less good than the first. Since her first ranked among last year’s best, what more need be said?” —
The New York Times
on
The Clay Hand

“Ingeniously plotted … A story of a young woman discovering what is real in life and in herself.” —
The New York Times
on
A Death in the Life

“Davis brings together all the elements needed for a good suspense story to make this, her fourth Julie Hayes, her best.” —
Library Journal
on
The Habit of Fear

“Mrs. Davis is one of the admired writers of American mystery fiction, and
Shock Wave
is up to her best. She has a cultured style, handles dialogue with a sure ear, and understands people better than most of her colleagues.” —
The New York Times Book Review
on
Shock Wave

I
T WAS TEN-THIRTY WHEN
the basketball finals let out. Phil guided her through the jostling, noisy crowd into the street. A youngster, plunging for a bus, brushed against her. It was stinging cold out, but he paused long enough, seeing her, to tip his hat and say, “Excuse me, lady.” That would only happen to Margaret Coffee, Phil thought. She could move with grace even among a pummeling crowd. Her head would be high if she were ankle-deep in mud, and anybody seeing her face would say she was walking on velvet. Dick Coffee was a very fortunate guy. But it was not the first time Phil had thought that.

In the cab she put her hand in his, and leaned against him—for warmth, of course. And he was warm enough, that was certain. Without turning his head, he could see the fullness of her mouth, the light sparkling on the moistened lips.

“If Dick had been here tonight, it would have been like old times,” he said, leaning away from her and scratching the frost from the cab window.

“Yes, old times,” she repeated. “But I’m glad you thought of me even if Dick wasn’t here. I thought you’d forgotten me.”

How often he had thought of her, and then forgotten her by dint of determination. Then, when he would see her, it would start all over again. But never a word of it said between them, never a sign. He leaned back in the seat, not quite touching her. “I wonder what he’s doing now.”

She, too, drew herself a little away. “Asleep probably. He always liked his sleep. Do you know Winston at all, Phil?”

“A little. I’ve driven through it a couple of times. It’s a dismal town. The whole country down there is dismal. The black from the mines lies over it like a dirty, bumpy blanket. You wouldn’t like it, Margaret.”

That would hold him a while, he thought. “Funny he didn’t stop on his way. My home’s not a hundred miles from there.”

“Maybe he plans stopping on his way back. He was funny about this trip. He was gone nearly two weeks before I knew where he was.”

“I wonder if he has another Naperville by the tail.”

She shivered and drew near him again. “I hope not. This waiting is maddening.”

He wondered if one ever got used to waiting. If anyone should have been used to it, it was Margaret Coffee. Her husband was one of the best known journalists in the country, a free lance now for several years. He had a nose for trouble, and somehow always managed to be on the scene when it came. Since the war he had covered two revolutions and had been kicked out of both countries, but he had done a job on the boot that kicked him. He always wrote with a point of view. He looked first, but having looked, he told the truth without mercy. Naperville, of which they had just spoken, was the scene of a coal mine disaster. The series Dick did on it, baring the political corruption behind a blast that might have been prevented, won him a Pulitzer prize. That was the high point in Dick’s career, although every one of his domestic stories marked a turning point in some phase of American endeavor—prison reforms, a seamen’s strike, combustible exports, a shirt organization. Everything he touched was explosive, in fact. He went in quietly, but all hell broke loose when he came out. And through it all, Margaret waited, always as near her husband as he felt it safe to take her—but waiting, always waiting.

“Why didn’t you go to Winston with him?” Phil asked.

“Because I wasn’t asked. May I have a cigaret?”

He reached into his pocket for one and gave it to her, lighting it then. Her face showed a little annoyance at his direct question. “Sometimes I wish he’d settle down, Phil. In a small town, maybe. I think I’d be perfectly happy if he were sports editor for the
Rockland Dispatch
.”

Her words irritated him, coming on top of his thoughts on Dick’s achievements. There was condescension in them, a pat on the head for a good little boy, who returned from the wars to his home-town job with the complacency of a caterpillar that didn’t give a damn if it ever became a butterfly.

“I’ll take that for a compliment,” he said, although he had taken it for quite something else.

“Do you ever hear from Eleanor?”

“It was such a cruel thing to do to you. But maybe it was all for the best, Phil.”

“But you haven’t married, Phil. You’re missing so much.”

He had meant it as no more than a slight irony, and one turned against himself. The cold rigidity of her face as she inhaled the cigaret deeply, therefore startled him. It might have been illusion in the faint and transient street light, but the tightness of her hands, folded together when he reached to touch them, was no illusion. Nor were her words: “Dick and I would be lost without one another. He worships me, and I him.”

He had no answer to that, having seen no call for it. The cab turned up Michigan Avenue, and at the bridge he rolled down the window a moment to glimpse the lights to the west. At any time of the day or night, that was the best view of Chicago, he thought, that and coming up from the south on the Outer Drive. It belied the hovels that crouched along the tracks of any train that came into the sprawling city.

The cab driver waited while Phil walked to the apartment door with her.

“We seem to have hit a sour note, Phil,” she said in the hallway. “Will you come up?”

“Thank you, Margaret. But I’d better hammer out my piece while it’s fresh in my mind.”

She gave him her hand. “Thank you for thinking of me, Phil.”

“Give my best to that guy of yours when you write. Tell him I expect to see him in Rockland when he’s through. A day at least.”

“I will.” She smiled and started inside. Then she turned back. “Phil, why don’t you write to him? Invite us both to Rockland. You did once, you know.”

“More than once. I’ll try again. Goodnight, Margaret. Tell him to give them hell down there.”

He started down the walk. “General Delivery, Winston,” she called after him.

Returning to the cab, he gave the driver the address of the Chicago Press Club. “General Delivery, Winston.” The words kept recurring to him. There was something desperate about the way she had come up with the idea. Several times he had extended such an invitation. It was always Margaret who declined, not Dick. His mother had said bluntly, “We’re too plain for the likes of her,” and he had let it go, thinking Margaret wiser than himself.

The doorman at the Press Club looked at his
Dispatch
card suspiciously. “
Columbus Dispatch
?” he asked.

“That’s good enough.” He pushed on, having discussed Rockland enough for the night.

The lounge was deserted except for a bridge game in the far corner of the room. Four old-timers—deans, he thought they might be called—turned when he entered, and turned back to their cards immediately and altogether, like a chorus of pantomimists, and just as silent. The bar, however, was cluttered with all variety of newspaper men, columnist and rewrite, city desk and criminal court. Phil recognized some of them from previous trips, and spoke a moment with them in passing.

He ordered a drink and took it to the fringe of a group around Randy Nichols, ruddy-cheeked, white-haired veteran AP man. He was in the middle of a story on the so-called Lipstick Murder, when he noticed Phil.

“Hello, McGovern.” He waved a chubby hand toward him, and Phil was pleased at being remembered. Dick had introduced him to Nichols over a year before.

“Well, McGohey picked up the hat,” Nichols continued his story, “and Lord, it was like any of a hundred hats you’ve seen in a check room. He put it up to his nose. ‘Smell that,’ he says to me. I smelled it. ‘Sweat,’ I said. ‘There’s more than sweat,’ he says. ‘It’s been in a room with cooking, strong cooking. Cabbage, I’d say.’ Well, we went back to the rooming place, and I swear he went along the hallways like a hound dog after a rabbit…. ‘Garlic, Prince Albert tobacco, ten cent incense, or worse—that bears checking,’ he says. ‘There’s been a lot of smoking in there…’”

Phil heard a telephone ring through the last few words, and behind him, the muffled voice of the bartender. He called out then: “Randy Nichols.”

The men parted to let Nichols through, and Phil noticed several of them empty their glasses and lay out money. They were ready to take off, straining to hear Nichols’ conversation. Phil watched him. Nichols’ tongue was between his teeth, and the only sound he made was the occasional grunt of understanding. When he hung up, he stood at the bar thoughtfully for a moment. Everyone was waiting. “Ever hear of a town called Winston?” he asked.