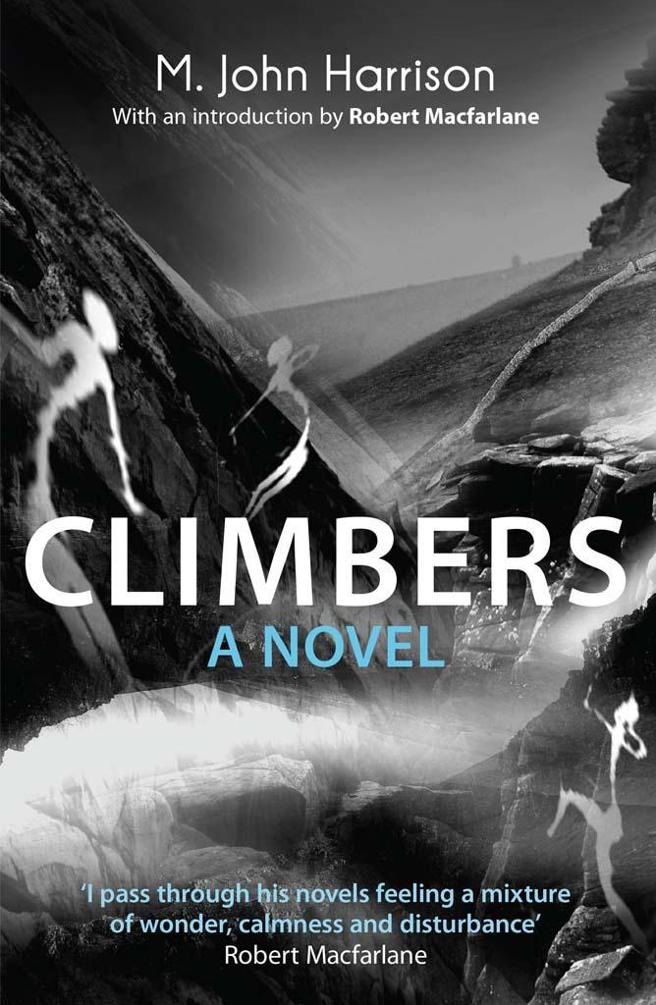 ‘The way he handles the sport and the social background bears comparison with that of David Storey in
This Sporting Life
. I know no higher praise’

6 Masters of the Modern Dance

12 Sankey and his Sister

17 Death on a Teacake

‘Out of this world we cannot fall.’

I cannot say I have not been warned. Again and again in M. John Harrison’s astonishing novels, those who are tasked with interpretation find themselves baffled, frustrated or worse. Theorists, detectives, scientists and code-breakers are all left intellectually concussed by their attempts to construe complexity. Even the machines of unimaginable hermeneutic power that inhabit his science fiction are unable to process the universe successfully. Some surplus of dark matter always exceeds their comprehension, some aspect of pattern persists that will not be reduced or translated. Signal is ultimately inextricable from noise, message from clutter.
Empty Space
(2012) – the novel that completes the trilogy begun so dazzlingly by
Light
(2002) – features a rounded chamber called a ‘mortsafe’, with a viewing window but no discernible contents: the mortsafe beckons the eye but refuses to be scryed, and as such is a version of the book that contains it. And in
Climbers
– certainly the best novel about climbing ever written, though such a description drastically limits its achievements – there is no steady ascent to enlightenment. The novel never, in the language of climbing, tops out. Mike, the main character, is left altered by his year on the rocks, but unwiser. In the final pages, he solos a route on a Welsh sea-cliff that he had climbed months before, and rests on a sunny ledge one hundred and fifty feet above the glassy sea, thinking back through what has happened to him. His only revelation concerns the persistence of confusion: ‘I sat in the niche for a long time. I realised I didn’t know any more than I had the last time I sat there. I didn’t know anything about anything.’

Hindsight is no clarifier in Harrison’s world, overview no advantage and analysis no virtue. Anyone who tries to write about his fiction – as I am here – must therefore adapt their methods. The usual critical duty of elucidation by paraphrase is pointless, for Harrison’s subjects are indecision, bewilderment, estrangement, apprehension, ‘empty space’, and grace, and these are all experiences necessarily unamenable to translation. The content of his prose cannot be extracted, processed and consumed: in this way, as in others, his politics are grained deep into his style. Because he is concerned above all with kinds of not-knowing, any account of his writing needs to safeguard that indeterminacy and to stand – in David Winter’s memorable phrase – ‘amazed in front of an unknown object at odds with the world’.

So let me try to express a little of the amazement I feel when standing in front of the work of Harrison, who is best known as one of the restless fathers of modern SF but who is to my mind among the most brilliant novelists writing today, and with regard to whom the question of genre is a flimsy irrelevance. To read
Light
,
Nova Swing
,
Empty Space
or
Climbers
is to encounter fiction doing what fiction must: carrying out the kinds of thinking and expression that would be possible in no other form. I pass through his novels feeling a mixture of wonder, calmness and disturbance; I end them brain-jarred and unsettled. It takes me time to recover. Metaphysical tremors and echoes persist for days afterwards. It feels as if my vision has had its depth of field skewed or a faint strabismus induced, causing illusions that slowly resolve into insights.

It takes time, also, to realise that what feels at first like bleakness in Harrison’s novels is in fact something more like parity of gaze. He offers lucidity without pity, but without rancour either. Although the fierce ease with which capitalism husks humanity is one of his main anxieties, and although debris – emotional and material – is one of his chief preoccupations, and although rupture and damage are the textures that most attract his eye, his vision is devoid neither of tenderness nor of hope. His compassion will be unmistakable to anyone who reads him, though it is unsentimental and tends to be activated by detachment rather than intimacy: one thinks in the Kefahuchi Tract trilogy of Seria Mau’s longings for the childhood she gave up, or of Kearney’s distant counter-factuals of parenthood, or in
Climbers
of Mike’s imperfectly suppressed trauma after the death of his step-daughter Nina, whose spleen is pierced by a shard of glass from a coffee table onto which she has fallen.

For all his interest in loss and harm, Harrison is also fascinated by the gifts that life gives to even the most broken-down and beaten-up of people. His books gleam with the lustre of found beauty and brief happiness: moments of being that exceed the claims and costs of market forces. This aspect of his work is, I think, what led Michael Moorcock to christen Harrison ‘an anarchist aesthete’. There are no candy-cane epiphanies or take-home morals – just occasional light-flares from unexpected sources, swift flips of the world from verso to dexter, surges of sensation that might make existence worth enduring. As Mike puts it early in
Climbers
:

There are days when, driving home from some gloomy hole in the hillside near Bolton, you wish the whole world was like this:

White bungalows on a hill, floating against a blue cloud full of rain. A one-track road looping across the moor. Old pop music on the radio. Sore fingertips. Nothing ever again but crags you have never seen before, made of a wonderful new kind of rock.

This is pure Harrison: the shabby everydayness of circumstance, the unforeseen onset of illusion (the ‘floating bungalows’), the experience of infinity (‘nothing ever again’) being contained within, but not annihilated by, the knowledge of transience, and the sudden shocking shift of reality across one of its internal borders, so that the crags seem briefly but utterly wonderful – strange to the point of otherworldly.

There is little point trying to précis the plot of
Climbers
, for it does not really deal in plot. What would one say? That a man in flight from a failed marriage moves north to Yorkshire, and becomes involved with the climbing scene. That the book follows him and his friends for a year or so as they climb, drink, fuck, laugh and fall. Such a summary drops foolishly short of the thing itself. What might be added? That one need not be a climber to read this novel, for one of its implications is that we are all climbers, in that we all seek to convert the external world into a symbolic system for self-explanation. That this is a novel which borders on the memoir (‘Mike’ shares not only a first name but also several on-record biographical facts with ‘M. John Harrison’). That this is a novel that knows more than its narrator, and perhaps more than its author, for it does its remarkable thinking at the levels of form and style. And that this is one of the finest books I know about the messed-up, mixed-up landscape of modern Britain.

Landscape is as surely one of its characters as Mike, Normal, Sankey or Gaz. The Britain about which Harrison writes here, though, is far from the bosomy green dreams of Batsford or the National Trust. This is a Britain – mostly a northern England – of mucky edgeland and contamination, of industry, scurf and discard. To evoke it, Harrison creates a language in which the natural and the artificial are indistinguishable. Dribbles of ice on winter rock are ‘shiny as solidified Superglue’. Hedge mustard is ‘stark as a tangle of barbed-wire’. Fireweed silk ‘looks like fibreglass waste’. Everywhere, the toxic and the beautiful twine or spar with one another: in a public lavatory in spring, the ‘cubicles [are] full of the smell of hawthorn, strange and lulling in a place like that, which overpowered even the reek of piss.’

The tone is set early on, when Normal drives Mike to a watershed on the moors above Manchester. There, abandoned by the roadside, they find ‘a three-piece suite out of someone’s front room in Hyde: light tan; moquette; sodden.’ Mike and Normal sit in the armchairs,

facing out towards Stand Edge and Floating Lights, across lines of peat hags like black combers rolling in from an infinitely polluted sea. The car-park bobbed gently on the psychic swell. All around its edges at our feet was the site of a murder. The icy pools of the watershed were full of children’s clothing. Acrylic dungarees and tracksuits, jumpers and quilted polyester dressing gowns; cotton dresses, slips with a bit of cheap broderie, knickers, and little teenage bras. Whoever had put them there had preferred bright colours. It looked as if whole families of Asian children had been murdered among the collapsed cardboard boxes, the heaps of industrial sawdust, the used Durex and the detached pages of
Swank
.

This is landscape writing, but not as we know it: a description so scoured of the delusions of the pastoral and the grandiosities of the sublime that the place it records seems surreal for being true. Again and again Harrison does this: stripping back perceptual conventions to leave places startling. At one point he writes of how months of drought cause the water-levels in the nearby reservoirs to drop, ‘revealing strange fossil beaches, submerged cliffs and channels, a monolithic architecture of tunnels and ramps.’ It stands as an image of Harrison’s own practice as a writer: draining away the familiar to reveal the alien structures beneath.

Harrison’s Britain is not denatured. Life persists; the green fuse still burns. But ‘nature’ is a compromised category, which expresses itself in ecologies of neglect and corruption, as in the London basement court in which ‘a mysterious vitality had caused its walls of greyish brick to grow damp moss, and in one place small clumps of willow herb and bright yellow ragwort’. The climbers themselves are versions of these weedy species, clinging to their walls of limestone and gritstone, finding their niches in quarries where the west wind blows in ‘sulphur from the badly managed factories in Stockport and Stalybridge’, stoking their ‘vitality’ with beer and cigarettes. The climbing they do is also impure, verging at times on the tawdry. It lacks the clean nobility of winter mountaineering, or the epic grandeur of big-range expeditions. It is mucky, messy, thrutchy stuff, that happens from litter-strewn crag-foot terraces, within eyeshot of cities and earshot of motorways. Nevertheless, it has its honour codes, its idiolect, its ‘numbers’, and – because it is as easy to die from twenty feet off the ground as from two thousand – it offers its practitioners exultations and depressions of extreme intensity, in which fear and excitement combine to become ‘indistinguishable from joy’.