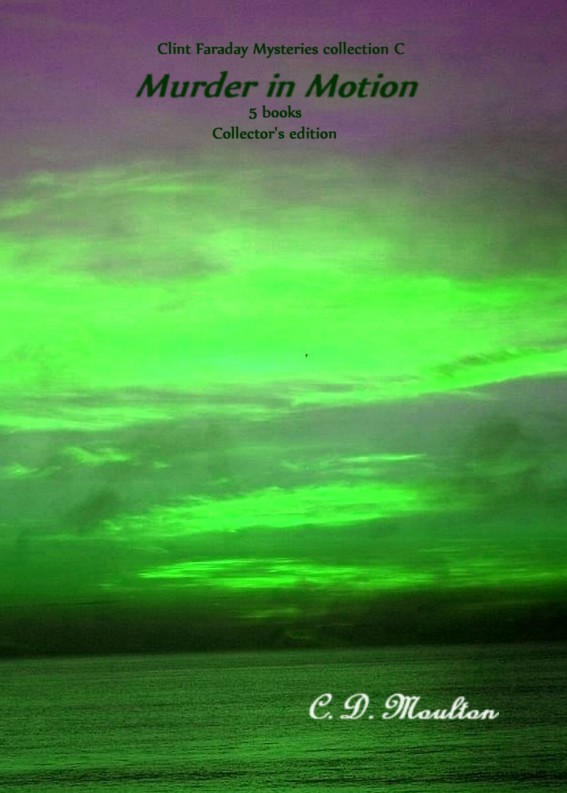 The Body in the
Bay

A Detour Through
Hell

all rights reserved: no part of this
publication may be reproduced or transmitted in any form or by any
means, electronic or mechanical, including photocopy, recording, or
any other information retrieval system, without permission in
writing from the copyright holder/ publisher, except in the case of
brief quotations embodied in critical articles or reviews.

These are works of fiction. Any resemblances
to actual persons or events is purely coincidental unless otherwise
noted.

CD Moulton has traveled extensively over much
of the world both in the music business, where he was a rock
guitarist, songwriter and arranger and in an import/export
business. He has been everything from a bar owner to auto salvage
(junkyard) manager, longshoreman to high steel worker, orchid
grower to landscaper, tropical fish farmer to commercial fisherman.
He started writing books in 1983 and has published more than 200
books as of January 1, 2014. His most popular books to date are
about research with orchids, though much of his science fiction and
fantasy work has proven popular. He wrote the CD Grimes, PI series
and the Det. Nick Storie series, Clint Faraday series and many
other works.

He now resides in Puerto Armuelles, Panamá,
where he writes books, plays music with friends, does research with
orchids and medicinal plants – and pursues his favorite ways to
spend his time: beach bum and roaming the mountain jungles doing
his botanical research. He has lately become involved in fighting
for the rights of the indigenous people, who are among his closest
friends, and in fighting the extreme corruption in the courts and
police in Panamá.

He offers
the free e-book,
Fading Paradise
,
that explains what he has been through because of the
corruption.

This is a work of fiction. Any resemblances
to persons, living or dead, is purely coincidental unless otherwise
stated.

Clint is on his way from David to Chiriqui
Grande when he gets a call that there is trouble on the comarca. He
goes to find four rednecks from the states with guns. He then
discovers they were set up to distract him from ... what?

Then it gets hairy.

Who Are These
People?

Clint Faraday, retired PI from Florida, USA,
stepped off the Changuinola, Bocas del Toro, Panamá bus at the
Rambala road on the twelfth. He was visiting friends in Miramar
earlier and was heading to David when he got a call from Ernesto,
an Indio friend, who said there was about to be big trouble on the
comarca. Some gringos were there treating the people like dirt.
They were armed and Orlando, the chief, didn’t want to call the
Policia Nacional onto the comarca. Clint said he was close and
would meet Ernesto at the Rambala road. He slipped his Glock into
the holster and waited less than three minutes for Ernesto to come
in his old Jeep. He didn’t say much as they rode the distance onto
the rough road into the comarca. Ernesto told him the gringos
seemed to think they had the right to go anywhere and treated the
natives like servants. They were drinking beer, but huge amounts of
it. They were driving one of the very few Hummers ever seen in the
area.

Clint came into the picturesque little
village and immediately saw the Hummer sitting outside the little
tienda with a number of the Indios milling around. He went inside
to find four large and slightly obese men threatening the woman who
ran the place with a rifle. Clint took his Glock from the holster
and shoved the muzzle roughly into the ear of the one with the
rifle and said “Drop it or I drop you! Now!”

He dropped it. Clint stepped back and told
Ernesto to collect all the guns, knives, or baseball bats – any
weapons – these clowns were carrying. Ernesto waved to the several
Indio men in front and picked up the rifle. One of the other
gringos started to reach for a pistol he was wearing and Clint
aimed directly between his eyes and said, “Give it a go, turkey!
I’ll have a turkey shoot!”

He told
the Indios to collect every weapon of
any
type these were carrying.

“
The
comarca has its own laws. Laws from anywhere else don’t apply. One
of those laws is that nobody carries a weapon or even brings it
onto the comarca.” He was making it up, but that was probably what
the laws of the comarca were. Clint knew and loved the
people.

Orlando drove up in his old Toyota truck and
came inside where Ernesto told him what was happening while the
rednecks were arguing with Clint. The several Indios were going
through the Hummer carefully and had three more rifles, two
pistols, a lot of hunting knives and so forth and some assorted
things they laid out because they didn’t know what they were.

“
You will
produce permits to have these things here in Panamá,” Orlando said
sternly. “There are no permits for weapons on the comarca. These
things will be confiscated.”

“
He said
you had better be able to produce permits for the guns and such
from Panamá City or he might just turn you over to the police
instead of simply throwing you off the comarca,” Ernesto said in
his excellent English. “You forfeit the weapons by even bringing
them here.”

“
What the
fucking hell! You ain’t taking my stuff! I’ll bring an army out to
this hole and wipe the bunch of you gooks off the face of the
earth!”

“
Give it
a go, asshole,” Clint said. “You might find these people can make a
game out of slicing the bunch of you into lunch meat.”

“
I know
there ain’t no such law here! Every one of them has a machete!”
another of them cried.

“
And we
didn’t take the ten or twelve machetes you have in that monstrosity
sitting out there. A machete is a tool on the comarca, not a
weapon,” Ernesto said reasonably. “They were told to take all
weapons and left them. That should tell an idiot they aren’t
weapons.”

“
No. Why
should I state the obvious?” Ernesto replied.

The ass grabbed at Ernesto. He was at least
twice his size. He got decked before he knew what hit him.

“
The
Indios will put up with a lot, but they won’t be attacked,” Clint
said conversationally.

“
Hell!
that damned fucking ... they’re a bunch of wimps! What the hell!?”
the original one whined.

“
Okay.
You’re right! This wimp just smacked this big brave macho man in
the puss. Want to be next?” Ernesto shot back.

“
I
suggest you take your three redneck asshole buddies back to
wherever you came from and stay there until you learn to respect
your betters,” Clint said.

“
Hey! You
ain’t no Indio! Where the fucking hell you get off with giving any
orders, anyhow?” the original one said. “We came from Alabama – and
Georgia. Danny. We just wanted to shoot some big game, but there
ain’t any.”

“
You
think you can just go anywhere you like, treat people like slaves,
shoot animals and no one will care?” Clint asked. “You have a lot
to learn.”

“
I don’t
care what it cost. You don’t have it in Panamá legally and
certainly not here on the comarca,” Ernesto replied. “You don’t
take anything off the comarca Orlando says you don’t. Clint is
declared an Indio by Orlando here and by Basilio on the coast. They
are the law. He is an Indio.”

Clint started to say something, then thought
it over. The two chiefs had said he was an Indio in a way. Maybe
that is the law.

“
You got
to be a Panamanian to be any Indio and he ain’t.” Freddie said.
“You better be careful who you fuck with. We can come get our stuff
with the police.”

“
I see,”
Clint said. “You are going to get the police to come onto the
comarca – incidentally, the police have no authority on the comarca
unless Orlando personally calls them – to retrieve a bunch of
unpermitted weapons you brought into Panamá illegally.
Neat!”

“
Hey! All
you do is slip some guy fifty bucks and they don’t find nothing.
All you have to do is slip another one fifty and they’ll come get
the stuff. The whole fucking country is on the take!”

“
This
ain’t Panamá City, turkey-ass. This is the comarca. You would have
to bribe Orlando,” Clint said, then turned to Orlando and asked (in
the Indio language), “How much to let them take their stuff and
go?”

“
I’ll
kick your fucking....” Freddie started. Clint interrupted him with,
“One more threat and we keep the Hummer, too.”

The four huddled and whined at each other for
a minute. Clint finally told them to get the hell off the comarca –
now – or they really would keep the Hummer and turn them over to
the police for illegal weapons as the cream on those
strawberries.

“
Probably
I’ll see you in hell someday,” Clint returned. The Indios
surrounded the four. Clint took several items from the pile of
weapons and tossed them back into the Hummer. Larry started to
reach for a machete when they got into the Hummer, but saw Clint
standing there with eight or ten Indios, all of whom had machetes
while Clint still had the Glock, so thought better of it. He gave
Clint the bird. Clint laughed.

“
How many
kilometers per gallon in that thing?” Orlando asked.

“
It’ll
cost them a hundred dollars just to drive to David! How
stupid!”

Clint laughed and said he’d hang around
awhile. The type would probably find some guns somewhere and come
back at two in the morning.

They didn’t come back so Clint went on to
Bocas Town in the morning – to find they went there. Sergio, head
of violent crimes, met Clint at the dock to tell him some redneck
asshole gringo had gotten his throat cut during the night.
Something about a fight with Indios yesterday in Rambala or
somewhere according to one of his buddies.

“
What?
Some Indio came from Rambala and cut his throat while he was
sleeping here in Bocas?” Clint asked.

“
Sorta
hard to swallow,” Sergio agreed. “I think maybe they pulled that
obnoxious act with the wrong person. Nobody seemed to like them and
two girls said they were almost raped by them. I think one of the
girls’ brothers or something did it. Ben decked that one they call
Danny – the one who got his throat cut.

“
I don’t
think Ben would kill anybody. They were yelling that they hated
queers and pushed at Ben. Bad move! He should get the national
citizenship medal, whoever cut the SOB’s throat! I won’t try too
hard to find who did it.”

Guinevere by Sharan Newman
Knowing by Viola Grace
Population 485 by Michael Perry
Tied Up in Knots by Mary Calmes
Poppies at the Well by Catrin Collier
Jungle of Snakes by James R. Arnold
Labor of Love by Moira Weigel
In Pursuit of Silence by George Prochnik
Pushin' by L. Divine
Taming the Country Star: A Hometown Heroes Novella (Entangled Bliss) by Margo Bond Collins
Our partner