Read Close to the Bone Online

Close to the Bone 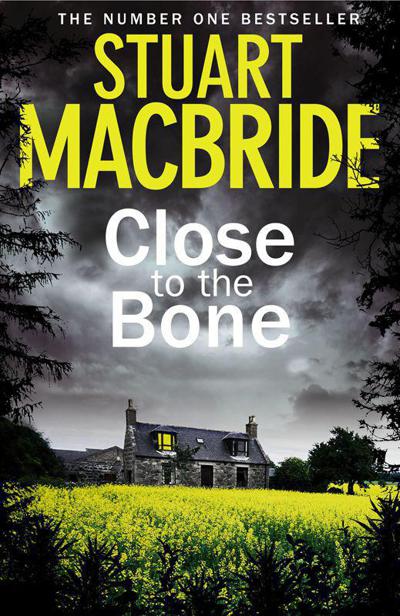 Read on for an exclusive short story by Stuart MacBride

So a big thank you is due to all of my forensic experts: Ishbel Gall, Dr Lorna Dawson, Prof. Dave Barclay, Dr James Grieve, and Prof. Sue Black.

More go to Dave Reilly, and Jon Lloyd for hints and tips and tricks of the trade.

Then there’s the excellently historical Chris Croly, and Fiona Musk. (If you’re in Aberdeen – go see the archives. They’re great, and they’re free!)

The same’s true of Phil Patterson, Isabella Floris, Luke Speed, and everyone at Marjacq Scripts.

A number of people have helped raise a lot of money for charity by bidding to have a character named after them in this book: Peter and Emma Sim, April Logan, and Ian Falconer. Thanks, guys.

And saving the best for last – as always – Fiona and Grendel.

She holds up the book of matches. Licks her lips. She’s practised the words a dozen times till they’re perfect. ‘Do you have anything to say before I carry out sentence? ’

The man kneeling on the floor of the warehouse stares up at her. He’s trembling, moaning behind the mask hiding his face. ‘Oh God, oh Jesus, oh God, oh Jesus. . .’ The chains around his wrists and ankles rattle against the metal stake. A waft of accelerant curls through the air from the tyre wedged over his head and shoulders. Black rubber and paraffin.

The smile slips. He’s spoiling it. ‘Thomas Leis, you have been found
guilty
of witchcraft—’

‘—condemned to burn at the stake until you be dead.’

‘Coward.’ The lights are hot on her back as she strikes the first match, then sets fire to the rest. They hiss and flare, bright and shining. Pure. Glorious.

‘Burn. Like you’ll burn in hell.’ She drags the smile back on. ‘It’ll be good practice for you.’ She drops the blazing matchbook onto the tyre and the accelerant catches. Whoosh – blue and yellow flames race around the rubber.

He jerks against his chains. Thick black smoke wreaths his face, hiding the mask from view as the fire takes hold. He pleads and screams and begs. . .

She throws her head back and laughs at the heavens. Spreads her arms wide. Eyes glittering like diamonds.

The voice of God crackles through the air, making the very world vibrate: ‘
And . . .
cut
. Well done, everyone – break for lunch and we’ll go for scene two thirty-six at half one.
’

A round of applause.

Then a man in a fluorescent-yellow waistcoat rushes into shot with a fire extinguisher. FWOOOSH – the flames disappear in a puff of carbon dioxide as the cameraman backs away, shielding his lens.

The runner peels off the bright green mask with the yellow crosses on it from the stuntman doubling for Thomas Leis. The stuntman’s grinning, even though he knows they’re going to digitally replace his face in post. Even though he
barged
over her line.

God save us from stuntmen who think they’re actors.

She puts her head on one side and frowns. ‘I don’t know. . . It felt a bit over the top at the end there. Really hammy. Wouldn’t she be more . . . you know, suppressed? Maybe even a bit sexual? Can I do it again? ’

‘I’m on my way. Tell everyone to—’ Something under his foot went
crunch
. Logan froze on the doorstep, mobile phone clamped to his ear. He slid his shoe to one side and curled his top lip. ‘Not
again
.’

Three little bones lay on the concrete slab, tied together with a tatty piece of red ribbon.

A hissing whisper came from the other end of the phone. ‘
Seriously, Guv, Pukey Pete’s having ferrets up here, it’s—
’

Logan stuck the phone against his chest and scowled out at the caravan park in the growing gloom. Bulky static caravans, the size of shipping containers, all painted a uniform institution green. A patrol car idled on the square of tarmac that acted as a turning circle, its blue-and-whites strobing in the warm late-evening air. The driver hunched forward in his seat, peering out through the windscreen at Logan, working his hands back and forth along the steering wheel – as if he was trying to feel it up.

Logan kicked the broken bones off the step into the straggly ivy growing up the side of his home. Then took a deep breath and bellowed it out: ‘I KNOW WHERE YOU LIVE, YOU WEE SHITES!’

Back to the phone.

‘If he’s screwing up the scene, arrest him. If not, just hold his bloody hand till I get there.’ Logan stomped over to the patrol car and threw himself into the passenger seat. Hauled on the belt. ‘Drive.’

The PC put his foot down.

The sun was a scarlet smear across the horizon, filling the patch of rough ground with blood and shadow. Trees loomed around the periphery, their branches filled with clacks and caws as the rooks settled in for the night.

A cordon of blue-and-white ‘P
OLICE
’ tape was strung between the vehicles, making a twenty-foot no-man’s-land around the Scenes Examination Branch’s inner cordon of ‘C
RIME
S
CENE
’ yellow-and-black. Three SEB technicians knelt in the dirt, poking at something, their white Tyvek oversuits glowing pink in the twilight.

Logan wrinkled his nose. The rancid stench of vomit fought against the greasy scent of burned meat and rendered fat. Like a barbecue with food poisoning. ‘Where’s the pathologist? ’

One of the techs – a shortarse with fogged-up safety goggles – finished scraping something dark and sticky into an evidence bag, then pointed her gloved finger at the other side of the ‘C
RIME
S
CENE
’ tape. There was another figure in the full Smurf outfit, hunched over a bucket, making retching noises, his back convulsing with every stomach-wrenching heave.

The short tech peeled her facemask off, exposing a circle of shiny pink skin and a thin-lipped mouth. ‘Poor wee bugger. Can’t blame him, really. Nearly lost a white-pudding supper myself.’ She puffed out a breath, hauled at the elasticated hood of her suit. ‘Christ it’s
hot
in here. . .’

A nod. ‘The Ice Queen’s en route as we speak.’ The tech pinged her facemask back into place. ‘You want to take a sneak peek? We’ve got as much as we’re going to before they move the body.’

She peeled off her gloves and snapped on a fresh pair. ‘What, and spoil the thrill of finding out for yourself? ’ Then she set off across an elevated walkway – metallic stepping stones, like upturned tea trays on tiny legs, keeping their blue plastic booties from contaminating the scene. It led away between a couple of burned-out hatchbacks, disappearing behind the blackened skeletal remains of a Renault Clio. A dark curl of smoke twisted up into the sky on the other side.

Logan adjusted his safety goggles, zipped up his oversuit, and zwip-zwopped after her. The walkway clanged beneath his feet. The rancid barbecue smell got worse. And then they were there.

His stomach lurched two steps to the right, then crashed back again. He swallowed, hard. Blinked. Cleared his throat. ‘What do we know? ’

‘Not much: victim’s male, we think.’ Another shrug. ‘He’s been chained to what looks like a section of that modular metal shelving stuff – the kind you get in your garage? Been hammered into the ground like a stake.’

The victim was kneeling on the hard-packed earth, his legs tucked under his bum. His bright-orange overalls were stained around the legs and waist, blackened across his chest and flecked with little glittering tears of vitrified rubber. Someone had forced his head and right arm through the middle of a tyre – so it sat across his body like a sash – then set fire to it. It was still burning: a small tongue of greasy flame licked up the side of the rubber.

The SEB tech groaned. ‘Bloody hell. . .’ She hauled a fire extinguisher from a blue plastic crate, pointed the nozzle, and squeezed the handle. A whoosh of white hid the poor bastard’s face from view for a moment, but when the CO
2
cleared he appeared again in all his tortured glory.

His skin was swollen and blistered, scorched crimson; the eyes cooked to an opaque white; teeth bared, yellowed and cracked. Hair gone. Patches of skull and cheekbone poking through charred flesh. . .

Logan cleared his throat. Looked out over the graveyard of burned-out cars. Deep breaths. The long corrugated metal roof of Thainstone Mart was just visible between the trees in the distance, what sounded like Tom Jones belting out ‘It’s not Unusual’ at a disco or corporate bash, dancing and boozing it up into the wee small hours. And when they were gone some poor sod would be up all night, clearing up all the spent party poppers and empty bottles before the next livestock auction.

The SEB tech thumped the fire extinguisher back into the crate. ‘It’s the rubber in the tyre – once it gets up to temperature it’s almost impossible to stop the damn thing from catching again.’