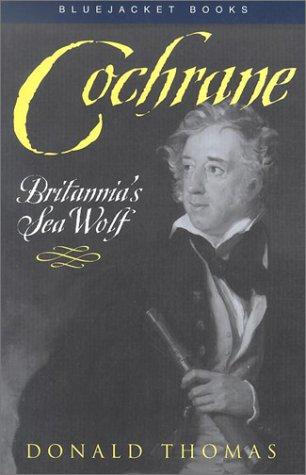 SUMMARY:
The fictional heroics of C. S. Forester's Horatio Hornblower and Patrick O'Brian's Jack Aubrey are pale imitations of the deeds of Admiral Lord Thomas Cochrane, one of the most daring and successful real-life heroes the naval world has ever seen. In this fascinating account of his life, Donald Thomas fills in the details of Cochrane's winning exploits against the French Navy, actions that earned him the title "Sea Wolf" from Napoleon. Despite his extraordinary accomplishments and the controversies that plagued his long life, today the admiral is not well known outside the naval community. Thomas's splendid narrative is certain to give the valiant and romantic sea warrior the recognition he deserves. His meticulous scholarship and index, notes, and bibliography make the biography a useful reference. The battle descriptions are particularly noteworthy, especially that of the Basque Roads in 1809 when Cochrane nearly achieved another Nile. Cochrane's battles on land as a politician are described with equal attention to colorful detail. While mounting a vigorous campaign against corruption in the Admiralty, he gained many enemies, who, in turn, framed him in a sensational stock exchange fraud case. Imprisoned briefly, he fought back with his usual intensity, restored his reputation, and returned to sea, bound in 1818 for the wars of independence in South America. Once again with nearly total disregard of danger, he helped liberate Brazil and Chile from colonial rule. Upon his death in 1860, a few weeks before his eighty-fifth birthday, he received a hero's burial in Westminster Abbey.

The right of Donald Thomas to be identified as the author of this work has been asserted by him in accordance with the Copyright, Designs and Patents Act 1988.

All rights reserved. No part of this publication may be reproduced, stored in a retrieval system, or transmitted, in any form or by any means, electronic, mechanical, photocopying, recording or otherwise, without the prior written permission of the copyright owner.

3.
The Capture of the Gamo (National Maritime Museum)

5. The Attack on the Basque Roads
(National Maritime Museum)

6. Cochrane's Design for a Temporary Mortar
(The British Library)

The
life of
Thomas, Lord Cochrane, later 10
th Earl of Dundonald, is more extraordinary than that of Nelson, and more far-fetched than anything which the late C. S.
Forester permitted Horatio Horn
blower. With a brig-sloop, which
The Times
later described as half the size of the smallest Victorian naval tug, he harried the French and Spanish shipping of the Mediterranean, seizing over fifty vessels, one of them a powerful frigate, many times the size of his own warship and carrying over three hundred seamen and marines. As a frigate captain himself, he kept the French coast in turmoil and, with his single ship, halted the main French advance into Catalonia for over a fortnight. With his explosion vessels and fire-ships at the Basque Roads, he reduced the French fleet to an array of stranded hulls, helpless before the guns of the British squadron.
1

Such exploits might, perhaps, make him little more than a Horn-blower who had stepped from the pages of fiction into the centre of Napoleonic sea warfare. Unlike his fictional counterpart, however, Cochrane entered parliament and became a Radical reformer, a quarter of a century before the Reform Bill of
1832.
As a democrat and an opponent of wholesale official corruption, he fought the Admiralty administration and the naval system as determinedly as he fought the French. By his account, these enemies revenged themselves on him by means of forged charts to secure his naval disgrace, and by a carefully organised prosecution to convict him as one of the principal movers of the greatest Stock Exchange fraud of the century.

That he should have survived imprisonment as a felon, then established his innocence, and ended his long life as admiral of the fleet is more than most works of fiction could accommodate. They would hardly risk including in addition the account of his campaigns as a mercenary admiral, in the service of liberty, in the Pacific, the Atlantic, and the Mediterranean, or his achievements in setting free more territory than Napoleon conquered. After so much, it seems hardly surprising that he should also have devised plans for poison gas and saturation bombardment, offering them to the Prince Regent in
1812,
the year in which the waltz was first introduced into the ballrooms of London.

His personal enmities were fierce and prolonged, their nature being indicated by the presence of two senior admirals, the senior admiralty civil servant, and a lord chief justice as his principal antagonists. A century after the events had taken place, the grandson of Lord Chief Justice Ellenborough was still trying to demonstrate that despite the public vindication of Cochrane's innocence he was, after all, guilty of the great Stock Exchange fraud.

Even in our time, reactions to Cochrane remain strong. John Gore, the most recent editor of Thomas Creevey's papers, describes Cochrane in that work as "one of the most splendid naval commanders that ever paced a quarter-deck". This was very much the view of Cochrane's later contemporaries in the Victorian period. At the other extreme, Doris Langley Moore in
The Late Lord Byron
describes him as "mercenary and dilatory" and as "the grasping admiral, whose numberless postponements of action are a curiosity of naval history". No one could have been more surprised by this last judgement than Cochrane's contemporary critics, whose general complaint was that he was all too ready to attack precipitately and take unacceptable risks. It was discipline rather than impetuousness, which Cochrane lacked in the view of his Victorian biographer J. W. Fortescue, who rather quaintly suggested that many of his hero's problems might have been solved if only he had had a public school education.
2

As in the case of so many biographical subjects, each age has seen in Cochrane what it has wanted to. His immediate contemporaries regarded him as a splendid national advertisement for superior British seamanship. The Radicals cheered him as a champion of democracy, Scott and the Romantics saluted him as the liberator of nations oppressed by foreign rule. To the Victorians, he was the supreme example of the hero of a boys' adventure story brought to life. It is no coincidence that Captain Marryat, who served as a midshipman under his command, used Cochrane's exploits as the subject-matter of some of his fiction. His guilt or innocence of the Stock Exchange fraud remains ultimately beyond proof or disproof, but his Victorian admirers thought such a crime morally impossible in so fine a man. The controversy was not settled, however, since a later generation still found the figure of the flawed hero more psychologically interesting than the unblemished variety.

In modern terms, Cochrane is perhaps most illuminating when seen against the social panorama of his age and in the full dimensions of his naval, political and personal life. Directly or obliquely, his story lives in the poetry of Scott or Moore, the diaries of Creevey, the letters of William Beckford, the novels of Marryat, as much as in the despatches of the time, the court reports, or the contemporary press. One of the most important documents is the
Autobiography of a Seaman,
written in the last months of his life. As an old and dying man, he used a professional writer, G. B. Earp, to assist him. Inevitably, the question was raised as t
o how much of the book was Coch
rane's and how much Earp's. Fortunately, the more important sections can be checked against the logs of the
Pallas
and the
Imperieuse,
the reports of the
Naval Chronicle,
naval despatches, transcripts of trials, and independent contemporary accounts. By this test, the
Autobiography
is fair and accurate in its account of the naval career. For the disputes with the Admiralty, and particularly the controversy over the Stock Exchange trial, it is inevitably a partisan document, whether Cochrane wrote it himself or it was written by Earp from his dictation or notes. In the case of Cochrane's
Narrative of Services in the Liberation of Chili, Peru, and Brazil,
there is corroboration of its events in the memoirs of William Miller, W. B. Stevenson, and other witnesses of the campaign against the Spanish in Chile and Peru.

In writing the present account of Cochrane's life, I have been most grateful for the assistance given by a number of libraries and institutions. My thanks are particularly due to the Bodleian Library, Oxford; Bristol Central Library; the British Library, Departments of Manuscripts and Printed Books, and the Newspaper Library, Colin-dale; Cardiff Central Library; the London Library; the Ministry of Defence Library; the National Library of Scotland; the National Maritime Museum; the Public Record Office; the library of University College, London; the University Library, London, and the library of the University of Wales Institute of Science and Technology.

Finally, I must acknowledge the advice and help of Mr Piers Burnett, Mr Michael Thomas, and Mr Alan Williams at various stages of the writing of the book, and my wife's enthusiasm during its long completion.