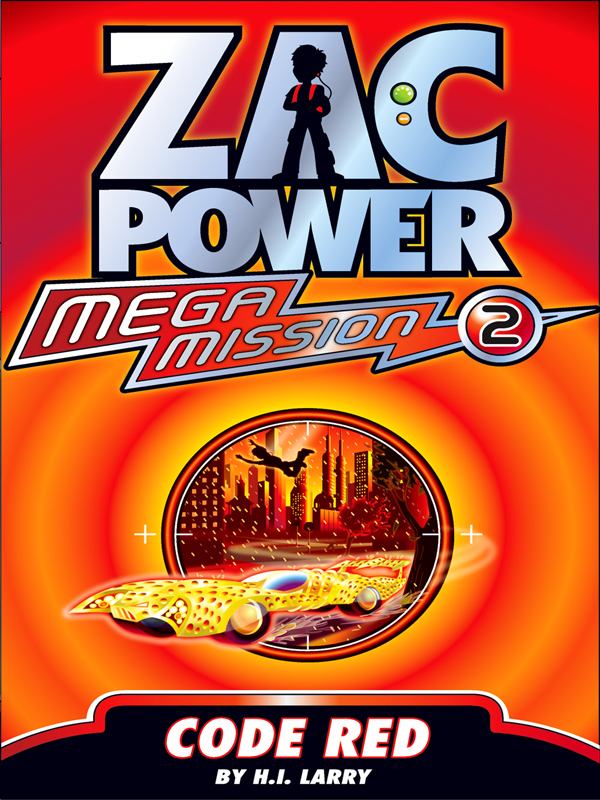 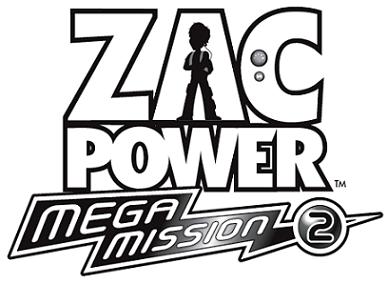 All rights reserved. No part of this publication may be reproduced, stored in a retrieval system or transmitted in any form by any means without the prior permission of the publishers and copyright owner.

Cover and illustrations by Andy Hook
Typeset by Pauline Haas

MISSION UPDATE
CLASSIFIED
In
BASE CAMP,
Zac found out
that a mystery BIG agent was
going to destroy all of
GIB's gadgets and vehicles.

Zac was sent to the
Black Jungle to investigate.
In the jungle, he discovered a
hologram of his long-lost grandpa,
Agent High Pants.

Zac also learnt that the
mystery BIG agent was his
exact double. . .another Zac Power.

Zac Power's eyes flashed open. He'd been dozing, but a strange noise had woken him up.

It took him a second to remember that he was in the rescue chopper. There were two other choppers flying alongside his.

Zac was on the way back to GIB Headquarters with the agents he had rescued from the Black Jungle.

He stretched his arms out and yawned.
I just need five more minutes to sleepâ¦

There was another blast. Their helicopters were under attack!

OK, I'm definitely awake now,
Zac thought, trying to peer out the window. He caught a glimpse of the BIG agent's jet behind them.

âThe BIG Agent!' cried Agent Cougar, as their helicopter dodged left. âHe's behind us in his jet!'

Their helicopter rattled. Another blast from the BIG agent's electromagnetic cannon lit up the morning sky, but it just missed them.

The BIG jet scored a direct hit on the helicopter to Zac's right. The chopper shuddered and started to fall out of the sky, all of its systems fried.

Zac watched it tumble down towards the ocean. 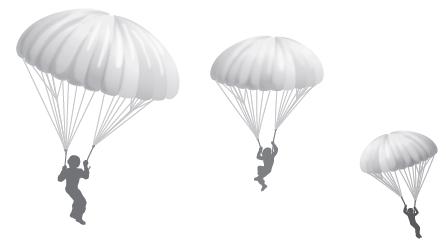 Three spots appeared in the sky, just beyond the falling chopper. Parachutes.

Zac breathed a sigh of relief.
They got
out in time,
he thought.
They'll be OK.

He looked out the rear window. The BIG jet was gaining on them.

Their pilot tried to pull away again, but this time the jet was too close. The blast of blue energy slid along Zac's side of the helicopter. It wasn't a direct hit, but it was enough to send them spinning off course.

âHang on to your hats, boys!' called the pilot. âThis could get a little bumpy.'

Zac could see the pilot wrestling with the steering controls.The helicopter rattled and shook as the pilot struggled to bring it down safely.

Up ahead, Zac could see a car park that was completely empty, except for one abandoned caravan. He'd seen this particular caravan before. It was actually a decoy hologram which disguised the secret entrance to GIB HQ.

But as Zac watched, the helicopter zoomed right over the car park.

âHey,' Zac said to the pilot. âYou missed the entrance!'

The pilot chuckled. âDon't think Agent Big Boss would be too happy if I flew a chopper this big in through the front door!' he said. âJust sit tight. We'll take the heavy vehicle entrance.'

The helicopter gave another lurch.

âAssuming we make it that far,' the pilot added.

Zac looked around, trying to catch sight of the BIG agent's jet. It seemed to have disappeared, and so had the third GIB chopper.

Zac's helicopter swung around to the left, and a little clump of trees came into view.The pilot brought them to a stop high above the trees. He hit a button and the helicopter started dropping downwards.

Zac held on tight as they jerked towards the ground. At the last second, the trees disappeared, revealing a wide, open tunnel.

Normally, the tunnel would have easily been big enough for a helicopter to fly through. But their helicopter was acting more like a bull at a rodeo than a finely tuned GIB vehicle.

Bucking and shaking, the chopper crashed down through the tunnel. It scraped against the steel walls, sending sparks flying.

The tunnel opened out into a massive vehicle storage area, filled with row after row of high-tech jets, cars and bikes.

The chopper hit the ground, bounced once, twice, and then crushed a row of Lightning Strike Ultra-Bikes. Finally it skidded to a stop.

Zac turned to the pilot. âNo offence,' he said, âbut next time I think I'll just take the bus.'

Zac and Agent Cougar climbed out of the helicopter into the storage hangar.

The whole place was buzzing with activity, and there were agents running in every direction.

A nervous-looking boy about Zac's age came racing up to them. âAgent Cougar?' he asked. âAgent Big Boss wants to see you immediately.'

Cougar nodded and the boy led him away.

A second later, a group of agents in green uniforms dashed past, almost bowling Zac over. They hopped onto a row of identical motorbikes and zoomed away up the entry tunnel.

âMedical team,' a voice behind him explained. âThey're heading over to get the people from the other two choppers.'

Zac looked around. It was his older brother, Leon.

âSo, who is he?' Leon asked. âWho's this mystery BIG agent who's going to wipe out all our gadgets?'

Zac still hadn't figured out how to answer this question. âHe'sâ¦I don't know
who
he is. But he
looks
exactly like me, like an identical twin or something.'

âNo,' said Zac firmly. âIt was too perfect to be a disguise. It was like looking into a mirror.'

âSo there's another Zac Power out there,' Leon said slowly, âand he's working for BIG. Is that what you're saying?'

âI don't know
what
I'm saying,' Zac sighed. He reached into his pocket and pulled out the little black device he'd found in the BIG agent's jet in the jungle.

âA holo-projector,' said Zac. âIt's got something to do with Grandpa, but â'

âGrandpa?' said Leon excitedly. âWhat is it? What does it say?'

âI don't know,' said Zac. âThe data's locked. It played for about 20 seconds and then it just cut out. But it sounds like BIG might know where Grandpa is.'

Leon's jaw dropped. âHow?' he said. âGrandpa's been missing for years! No-one knows where he is!'

âYou've got to show the holo-projector to Agent Big Boss!' said Leon. âIf we can unlock this thing, maybe we can finally find out what happened to Grandpa!'

But at that moment the nervous boy reappeared. âAgent Rock Star, Agent Big Boss wants to see you,' he said.

âHuh? Oh, this thing. I don't know. It belonged to the BIG agent.' 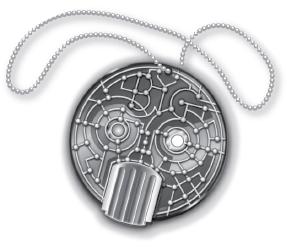 The Tower, The Zoo, and The Tortoise by Julia Stuart
Post-Apocalyptic Nomadic Warriors by Benjamin Wallace
Night Series Collection: Books 1 and 2 by RS Black
Sabre Six : File 51 by Jamie Fineran
Tycoon Takes Revenge by Anna DePalo
Moth to a Flame by K Webster
Rituals by Cees Nooteboom
She Who Was No More by Pierre Boileau
Five Go Down to the Sea by Enid Blyton
Shamanspace by Steve Aylett
Our partner