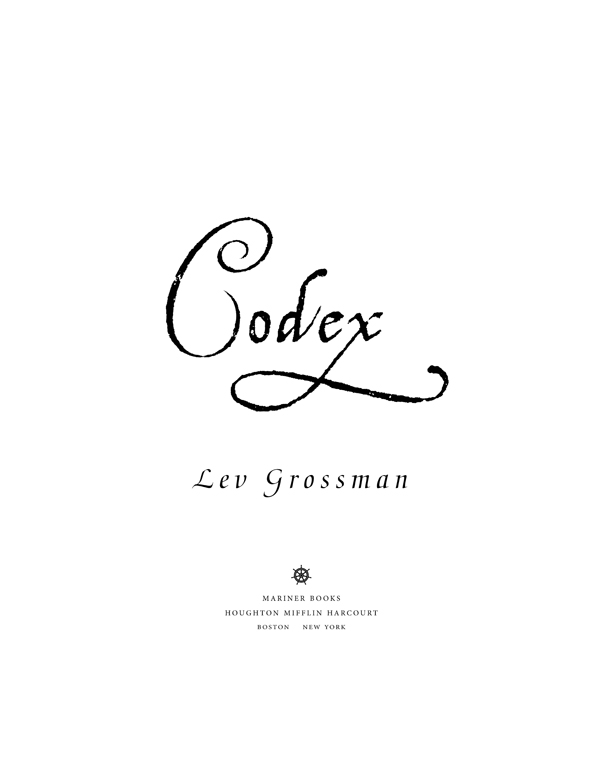 âGeoffrey Chaucer,
T
HE
B
OOK OF THE
D
UCHESS

E
DWARD WOZNY STOOD
squinting at the sun as crowds of people excused themselves past him in both directions. It was hot and bright. He was wearing a very expensive gray handmade suit, and he had to check what seemed like dozens of inside and outside pockets of various sizes and shapes before he found the scrap of paper he was looking for.

He turned it over. It was roughly triangular, with one clean right angle and one ragged edge, the corner of a piece of copier paper rescued from the recycling bin at his office. On one side was a fragment of a xeroxed memo beginning “...insofar as all holders of any equity funds...” On the other side was a name and an address written in blue ballpoint pen. He folded it neatly in half and put it back in the tiny inside pocket-within-a-pocket where he found it.

Edward checked his watch and set off up Madison Avenue, stepping over a
NO STANDING
sign that had been wrenched out of the concrete and lay across the sidewalk. In front of the corner bodega a man was spraying down trays of cabbage and lettuce and Swiss chard with a hose, filling the air with a ripe, wet, vegetable smell. A branching delta of glittering rivulets ran down toward the gutter. He stepped fastidiously between them and turned the corner onto Eighty-fourth Street.

He felt goodâor at least, he was doing his best to feel good. Edward was on vacation, his first time off since he'd started work four years ago, and he'd forgotten what it was like. He was free to go wherever he wanted, whenever he wanted, and could do whatever he wanted when he got there. He thought he would enjoy it, but he felt unsettled, disoriented. He didn't know what to do with himself, with this blank, unscripted, in-between time. Yesterday he'd been a hard-charging, highly paid investment banker in New York, and two weeks from now he'd be a hard-charging, highly paid investment banker in London. For now he was just Edward Wozny, and he wasn't totally sure who that was. Working was all he did, and it was all he could remember doing. What did people do when they weren't working? Play? What were the rules? What did you get if you won?

He sighed and squared his shoulders. It was a quiet block, lined on both sides with expensive limestone townhouses. One of the facades was completely overgrown with a single fantastic vine as thick as a tree and twisted like a rope. A crew of overalled workmen was wrestling a white upright piano down a flight of steps into a basement apartment.

Watching them struggle with it, Edward almost stumbled over a woman who was crouched down on the pavement.

“You know, if you're going to use that word with me,” she said crisply, “you'd better be sure you mean it.”

The woman was squatting down on her haunches, her dress stretched taut between her thighs, one hand on the pavement for balance like a sprinter ready to burst out of the starting blocks. Her face was hidden from him by the wide brim of a cream sun hat. A few yards behind her stood a white-haired man with a narrow face like a knifeâher husband? her father?âwaiting next to a cart piled with trunks and suitcases. His hands were clasped lightly behind his back.

“Oh, I'm a child now? Is that what I am?” she asked excitedly. Her accent was somewhere between English and Scottish.

“Yes, that's exactly what you are.”

The woman looked up at Edward. She was older than he was, maybe thirty-five or forty, with pale skin and dark wavy hairâbeautiful in a way that was long out of fashion, like a girl in a silent movie. He could see the pale tops of her breasts in their lacy white cups. Edward hated this kind of public displayâit was like rounding a corner and stumbling directly into somebody's bedroomâand he tried to slide past her, but she made eye contact before he could make his escape.

“And what about you? Are you just going to stand there looking down my dress, or are you going to help me look for my earring?”

He stopped. For a critical moment a simple, diplomatic response eluded him. Almost anything would have sufficedâa graceful demurral, a half-decent witticism, a lofty silenceâbut he blanked.

“Sure,” he muttered. Slowly, awkwardly, he crouched down next to her. The woman picked up the exchange with her companionâher husband, Edward decidedâas if nothing had interrupted them.

Edward frowned, studying the glittering cement sidewalk and pretending to have suddenly gone profoundly deaf. He had somewhere to be and his own business to mind.

But he couldn't help noticing that the couple was impeccably dressed. He had a professional knack for estimating incomes, and he smelled money here. The man wore a perfectly tailored light flannel summer suit, the woman a fitted cream sundress that matched her hat. He was thin and a little ravaged-looking, with a thick shock of white hair; his complexion actually was a little florid, as if he'd just gotten back from a spell in the tropics. The luggage piled up on the cart was extravagant, made of deep green leather with a rough, pebbly texture, and it included pieces of every imaginable shape and size, from tiny cubical vanity cases to giant steamer trunks studded with gleaming metal clasps to a circular hatbox the size of a bass drum. It was old-fashioned, either vintage or a meticulous re-creation thereofâit had the glamorous air of an early twentieth-century transatlantic ocean liner, the kind featured in old newsreels being christened with bottles of champagne amid silent storms of confetti.

A sedan with tinted windows idled by the curb. On each piece of luggage was a label with a single word, in small or large letters:
WEYMARSHE.

Edward decided to break his silence.

The woman looked at him as if a passing shih tzu had suddenly spoken.

“Silver. The backing must have fallen off.” She paused, then added unhelpfully: “It's a Yardsdale.”

The older man got tired of waiting and knelt down too, pausing first to tug up the legs of his trousers with the air of somebody being dragged into something that was infinitely beneath his dignity. Soon they were joined by the driver, a sallow man with a weak chinâa virtual straight line from his lower lip to his collarâwho looked cautiously under the limousine. The doorman finished loading the luggage into the trunk. Edward sensed that they shared the older man's dislike of the woman in the sun hat. They were allied against her.

Something crunched under Edward's right heel. He drew back his foot to reveal the crushed remains of the earring. Judging from its surviving twin it must have been shaped like a delicate silver hourglass, but now it was a scrap of mashed tinsel indistinguishable from a gum wrapper.

Serves her right for dragging him into this, he thought. He stood up.

“Sorry,” he said, without making any special effort to sound apologetic. “I didn't see it.”

Edward held out his hand. The woman stood up too, her face flushed from squatting for so long. He expected an explosion, but instead she looked like she'd just gotten exactly what she wanted for Christmas. She flashed him a heartbreaking smile and plucked the earring delightedly from his hand. As she did so he noticed something he'd missed before: a drop of blood, swollen and fully formed, dangling tremulously from her delicate earlobe. Another spot of blood was visible on the shoulder of her dress right below it.

“Look, Peter! He utterly demolished it!” She turned gaily to her husband, who was brushing invisible dirt from his sleeves. “Well, you could at least try to feign some interest.”

He peered at the contents of her palm.

Just like that, they were back to keeping up appearances. The woman rolled her eyes at Edward conspiratorially, then turned to the car. The weak-chinned driver opened one of the doors, and she climbed into the back seat.

“Well, thank you very much, anyway,” she called back to Edward from the bowels of the sedan.

The driver shot Edward a warning glance, as if to say,
that's it, that's all you get,
and the limousine peeled away from the curb with a short, sharp screech. Were they somebody famous? Should he have recognized them? A little triangle of the woman's cream dress was trapped in the door when it closed, and it luffed frantically in the wind. Edward pointed and started to yell something after them, then stopped. What was the point? As the car turned the corner onto Park Avenue, still accelerating, Edward watched it go with a sense of mild relief. But he felt a trace of belated disappointment, tooâthe way Alice might have felt if she had decided, sensibly and prudently but boringly, not to follow the White Rabbit down the rabbit hole.

He shook his head and refocused on the matter at hand. Edward was officially on vacation, two weeks off free and clear before he took over his new job in the London office, but he had agreed to look in on a client before he left. They were a married couple, colossally wealthy, and he'd had a small part in making them fractionally wealthier, a rather artful deal he'd orchestrated involving silver futures, a chain of thoroughbred horse farms, and a huge and hugely undervalued aviation insurance company. Setting it up had involved weeks of mind-crushingly dull research, but when he'd put all the elements in motion it had worked perfectly, like musical chairs in reverse: When the music stopped everyone else was left sitting down in an uncomfortable position, and he was the one left standing up, free to walk away with an appallingly large heap of money. He'd never even met the clients, hadn't known they knew who he was, but he supposed they'd gotten his name from his bossâprobably they'd asked after that promising young lad who'd earned them all that cash, and that was why they'd requested him today. He'd been instructed to keep them happy at all costs. At the time he'd made a fuss about itâwhat was the point of starting up a new client relationship just when he was about to leave?âbut now he was embarrassed to realize that he was almost looking forward to it.

The building the well-dressed couple was leaving turned out to be his destination: an ugly old brown brick high-rise left over from the nineteenth century. The windows were small and crowded close together except for the very top three stories, where they were twice or three times as tall as on the other floors. A cheap-looking, billiard-green awning extended out over the sidewalk with a much-trodden red carpet underneath it.

“I can help you please?” he said. He was short and broad, with a thick mustache. His thick accent might have been Turkish.