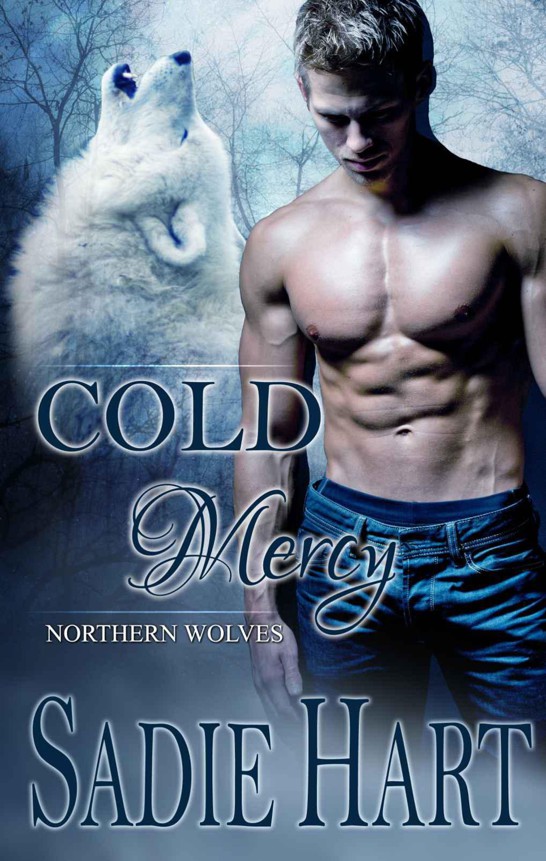 Bay Hollister dreams he’s a monster. A bloodthirsty wolf, to be exact, but when the animal in his nightmares attacks a woman, the last thing he expects is for her to be real.

Eden Marks has a broken dog sled and a torn jacket–but she’s still not sure
what
attacked her the other morning. After all, wolves the size of bears don’t exist. But when she meets Bay, they both discover a side of Mercy Pass they never knew existed: Huge, white werewolves, frost-touched trolls, and the queen of the winter Fae, whose dark magic is waking and slowly growing stronger.

And when the queen calls her wolves to her each night, Bay struggles not to succumb. But as he fights to make the beast inside of him his own, it’s Eden who calls to the man in him and makes him feel human. However, against a foe that will show no mercy, will their newly-forged love be enough? Or will the last shreds of Bay’s humanity fade away until he becomes just another beast of the night...

License Notes: This ebook is licensed for your personal enjoyment only. This ebook may not be re-sold or given away. If you would like to share this book with someone else, please purchase an additional copy. If you’re reading this book and you did not purchase it, or it was not purchased for your use only, then please return to Amazon.com and buy your own copy. Thank you for respecting the hard work of this author.

Author’s Note: This is a work of fiction. The names, places, characters, and incidents are products of the writer’s imagination or have been used fictitiously and are not to be construed as real. Any resemblance to persons, living or dead, actual events, locales, or organizations is entirely coincidental.

Snow buffeted in swirls outside her window as Eden Marks glanced outside to see the dogs circling their wooden houses. Their six-foot chains pivoted around the doghouses, allowing the dogs to wear circles in the snow as they paced. The dusky light of early morning made it hard to see, but the lamps shimmering off the back of her house and along the pole barn illuminated the dog kennels. They were raring to shed the chains and cover some mileage.

And after the week they’d had, she couldn’t blame them. They’d spent the last few days cooped up in her house, barking and pacing like crazy as one storm broke, only for the next to blow in. Eden leaned a hip against the counter and grabbed her cup of coffee. Straight black, because it was the only thing other than the frozen morning air that would wake her up.

And both were on the menu for today.

She couldn’t pass up weather like this. Storm after storm had rolled in this year and white out conditions were too rough for anyone to want to hitch a ride in a dog sled. In a normal winter, Mercy Pass was dangerous enough to traverse, even with a skilled travel guide. In the weather they’d been having? Treacherous was an understatement.

Eden blew over the hot liquid, the bitter scent of coffee comforting as she stared out at the crystalline blanket of fresh snow. In the past, most of her money had been made in the other three months of the year, but she’d started the sled dog tours for kicks a few years back. Just a way to let her have her passion. And thankfully, people had loved it as much as she had.

But apparently passion was something this winter stomped on. One corner of her lips twitched up in a half smile. She didn’t have much
passion
in any other part of her life. Then again, out in the boonies, with nothing but a small town and the occasional tourists, where the hell was she supposed to meet a man?

Not really her type of scene.

The wind battered at the windows, almost taunting her, and Eden watched the dogs pace frantically around their houses, ready to go. Max, one of her lead dogs, tossed back his head and howled in the yard, and the other dogs joined in. A yipping chorus of barks and half-howls that made Eden smile.
Time to go
. Especially if she wanted to make it to breakfast with Kennedy and Rowan at the Fairy Cat Café.

Breakfast was about the only meal of the day they actually had time to meet. Missing it wasn’t an option. Draining what was left in her cup, Eden grabbed her gear and suited up. Stuffing her insulated sock-covered feet into her boots, she snagged her coat off the rack. Gloves dangled from her wrists as she headed out, stuffing her earmuffs onto her head as she strode to the barn.

She’d prepped the gear last night in hopes for the promised weather break, so all she had to do was lug out the sled and harness the dogs. It didn’t take her long, practice making her movements smooth and efficient, and almost every dog on the line was a pro by now.

Everyone except the ninth dog, her youngest. At five months old and without a bit of drive to run, Smuggler lounged in front of his doghouse, his ears pricked towards the commotion as the other dogs bellowed and danced in their harnesses, his tail wagging slowly, but he made no move to get up as she approached.

“Okay fellah, today, we’re going to try something new.” Something she wasn’t even sure was particularly smart.

Unhooking him from his house, she slipped him into a car harness—not the working style harness the other dogs wore, but a one meant to seat belt an unruly dog into a car. Or to a dogsled for that matter. He pranced beside her, curious, but he showed none of the charging desire to get in line with the others. He was a gorgeous little copper boy, with a white underbelly, and a dark mask over his face that made him look like a raccoon. Which was exactly how he’d gotten his fiendish name. He’d reminded her of a pirate and had fit the name of her business: Smuggler’s Cove. He made a perfect mascot.

Shame, but he didn’t seem to show any signs of wanting to run.

“Up you go,” Eden said and gently led him onto the sled, strapping him into place. Maybe getting a firsthand view of the trip, wind whipping in his face—without actually
having
to run—and he’d perk up a bit more. Maybe he’d realize the fun he was missing.

And maybe she was on a wild goose chase.

Pulling her mittens over her hands, Eden stepped behind the sled and released the break. The dogs yowled, eager to go. “Hike!”

Like rockets, her lead dogs, Max and Kona, lunged into their harnesses, the other dogs following behind them, and the sled shot forward at a fast lope. They’d been cooped up far too long, so Eden let them have their head, letting them pick their pace. She verbally steered them towards the trail she wanted to check for a group she had coming in later today—weather permitting—and let the dogs stretch their legs. Smuggler gave an excited bark in front of her and settled back to watch the view.

Icy wind snapped at her face as the dogs tore up the trail, the snow covered pines thickening around them as they wove deeper through the forest pass. The snow deepened here and the dogs slowed, having to work their way through a normally easily passable trail. When the woods broke into a small clearing Eden called out, “Whoa.”

She’d intended to stop the dogs, get a good look around and see which of the trails leading through the second half of the forest looked the most traversable. But the moment she reached to set the break a low howl rippled through the trees. Keening. It had an eerie essence to it that lifted the hair on her arms and made her freeze. Her breath came out in a soft white plume as she spun, her eyes wildly searching the trees for the source of the howl.

It didn’t sound like any wolf she’d ever heard. Smuggler whined from his place in the sled, thrashing against the hold of the seat belt buckling him down, and Eden reached a gloved hand down to stroke him. The howl sounded again, darker this time. Menacing. Her stomach twisted.

Nothing about this felt right.

She licked her lips. Maybe some dogs had gotten loose and turned feral over the summer. Either way—hungry wolves or hungry dogs—she didn’t want her team anywhere near them. Best to get out of here while she could.

“Haw!” she called out, cueing the dogs to take the trail to the left just as another howl sounded. Closer this time. Eden jerked in the direction of the sound, scanning the shadows beyond the trees, fully expecting to see a wolf staring out at her.

Max gave a panicked yip and the sled lurched forward, but not toward the trail home. Nervous energy darted down the line, the dogs slinking into a panicked trot with the ears pinned back, tails tucked.

“Easy,” Eden called out, trying to soothe them, but it was too late. Another howl ripped through forest, this time followed by a snarl that lit fear down her spine, and the dogs bolted across the clearing. Eden clutched the sled, trying to stay on as it tossed sideways as the dogs lurched to one of the more familiar paths. “Whoa, Max, whoa!”

A blur of white streaked across the trail ahead and the dogs banked hard to the right, smashing through the thick undergrowth. The sled hit a rock and Eden cried out as it flipped, knocking her off balance.

Branches reached out and slapped at her face as Eden fought to hang on, screaming for the dogs to slow. Smuggler yelped from the basket and she could hear him thrashing. Then the sled jerked one last time and halted, the sickening snap of the towline the last sound Eden heard as her team raced out into the forest, leaving her and the sled behind.

Out of breath, sore as hell, and frightened, she dragged herself up to her feet on shaky legs. Smug struggled beside the sled, his tail tucked between his legs, his little raccoon face staring up at her, and she leaned against the side of the sled.
Shit
. While the towline shouldn’t have snapped that easily and she could already feel the nausea boil in her stomach with fear for her dogs, she’d been damn lucky it’d broken when it had.

Especially when she thought of how badly the pup could have been hurt.

“Definitely never doing that again,” she told Smug as she unhooked him, using a bit of rope from her sled to create a makeshift leash. Leaning down, she ran her hands over him, checking for injuries. Relief settled in her shoulders, easing the knotted tension in her muscles, and Eden blew out a shaky breath. That could have been worse. Much, much worse.

Mad River Road by Joy Fielding
SWORD OF TULKAR by J.P. Reedman
Renegade by Debra Driza
The Dragon's Heart (Dragon Lore) by Eden Ashe
Straits of Power by Joe Buff
Dealing with the Past by Toni Griffin
Reverb by J. Cafesin
The Gravedigger’S Daughter by Joyce Carol Oates
48 Hours - A City of London Thriller by J Jackson Bentley
Accidental Rock Star by Emily Evans
Our partner