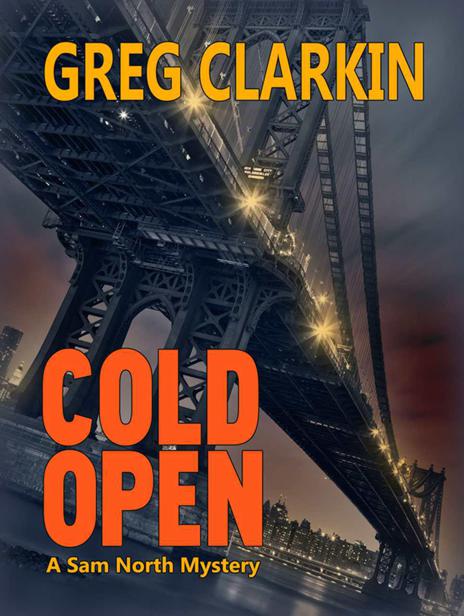 This book is a work of fiction. Names, characters, businesses, places, events, dialogues, and incidents are either the product of the author’s imagination or are used fictitiously. Any resemblance to actual persons, living or dead, or to actual events or locales is entirely coincidental. Though Liberty News is an imaginary cable news network, if it were real, I would wish for it to have a strong primetime lineup and favorable channel placement on cable systems.

This eBook is licensed for your personal enjoyment only. This eBook may not be re-sold or given away to other people. If you’re reading this eBook and did not purchase it, or it was not purchased for your use only, then you should return it and purchase your own copy. Thank you for respecting the hard work of the author.

Copyright © 2012 Gregory Clarkin
All rights reserved, including the right to reproduce this book, or portions thereof, in any form. No part of this text may be reproduced, transmitted, downloaded, decompiled, reverse engineered, or stored in or introduced into any information storage and retrieval system, in any form or by any means, whether electronic or mechanical without the express written permission of the author. The scanning, uploading, and distribution of this book via the Internet or via any other means without the permission of the publisher is illegal and punishable by law. Please purchase only authorized electronic editions and do not participate in or encourage electronic piracy of copyrighted materials.

If you'd like to be the first to hear about the next Sam North mystery, and other things such as exclusive content, news and contests, please sign up for the
Sam North Mystery Newsletter.

For Rani, Sophia, Matthew, and Alex.

And Vincent and Rosemary.

Cold Open
(noun): the opening of a newscast by jumping directly into a story without rolling the beginning or opening credits. No top-of-the-show introductions, no fancy graphics, no dramatic music, no deep-voiced narrator telling you about all the important news about to be covered.

I walked into Liberty News just before four a.m., and Charlie Morris was on me like I owed him money.

The big, hangar-like newsroom was near empty. It was a Tuesday in August, the heart of a slow, late-summer news cycle. Anybody with any pull or money was on vacation. I wasn’t.

Morris zigzagged his way through the desks, determined to ruin my morning.

Charlie was a good guy, a veteran cameraman, but a guy needs a little personal space at this hour.

“Sam, listen,” he said as he closed in. He had played the angles nicely and was just twenty feet from me. “I need to talk to you.”

He was dressed in his summer uniform. Cargo shorts and sneakers and a black Metallica
T-shirt. I was in a gray-checked lightweight suit. A Joseph Abboud and one of my favorites. I had a light blue shirt on, with my tie folded and stuffed in the pocket of the suit jacket, which I carried slung over my shoulder.

In my other hand I had a cup of takeout coffee from the Redwood Diner, the little place tucked away downstairs on Forty-ninth Street.

I stopped and turned and glanced over his shoulder at the row of red digital clocks on the far wall. My eyes settled on the first one.

He was agitated and impatient. “Yeah, sure. Whatever.”

We walked across the newsroom to my desk, past the handful of producers and writers for Liberty Live, our five a.m. show. They sat with their heads down, pecking away at keyboards.

“What’s so important that you have to attack me at four in the morning?” I asked as he pulled up an empty chair. “You got an intern problem or something? Maybe had a little too much to drink and—”

Charlie rolled his chair closer, and our knees almost touched. He looked around to make sure no one was close.

“Just so you know,” I said, “I’m not trained to hear confessions.”

“I mean, I can listen and all, but I can’t make the stuff go away.”

He turned serious. “You remember my buddy, Wade?”

“Guy was a shooter at Channel Four. Got fired. Now he sits in his car all night and most of the day listening to the police scanner. Lives in the damn vehicle.”

“Scanner jockey, huh? Sorry to hear about it.”

“Tries to be the first to the scene and shoot the footage then sell it anywhere he can,” he said. “The guy lives for a good crime scene.”

I had some more of the coffee and looked at him. “What does he have?”

“He says something good,
real
good.”

“Wade hears a call a couple of hours ago. Someone spotted a floater in the East River, off Twenty-third Street.”

“Okay, but we’re not really breaking any new ground here.”

He leaned even closer and looked around. “He says the floater is real high profile.”

“What about a clue?”

“Doesn’t have to be a
Jeopardy
clue, just a little one.”

“How much does he want?”

“He says he will,” Charlie said.

“You got to be kidding me.”

“Damn well better be the president for that money.”

“Doubt it. Wade is unpredictable,” he said. “It could be huge, or he could be overreaching.”

I sat back and looked across to the far end of the room and the cluster of desks over by the windows that looked east, out onto Sixth Avenue. It was the assignment desk, and off in the distance I could see a lone figure sitting in his char. He was a tall, skinny guy, and at the moment he was napping, chin to chest.

Blake Jennings was the early-morning assignment editor, and any and all decisions needed to go through him.

“You know there’s no way Blake is going to pay two thousand dollars,” I said.

“Couple of months back Wade sold us something that didn’t quite pan out,” he said.

“Yeah, said he had shots of the mayor leaving the apartment of a woman other than his wife.”

“Wade swings and misses,” I said.

“Big-time. On top of that he kept the three hundred bucks. Said it was for gas and emotional stress.”

“They often go hand in hand.”

“Blake banned us from doing business with him. Called him a head case.” Charlie leaned closer. “Sam, I’m the first to admit Wade is a nut …”

“But you think he has something?”

“I do. I could hear it in his voice. He says everyone will know this name. Plus, he’s already shopped it to Channel Four.”

“They didn’t bite. Said they weren’t going to play some game with him. They wanted to see the footage first. He said no way.”

“But, now they know someone big went for a swim,” I said.

“Exactly,” he said. “And I’m sure they’re calling every cop source they got.”

“Downstairs. Parked in the NYP zone.”

“Just try,” I said. “Tell him I’m getting the cash and we want it, we just want to see a few seconds of it.”

Charlie pulled out his phone and called, and I sat back and took another drink of coffee. I grabbed a memo that had been left on my desk. It was from Liberty’s security office.

Please be advised that a large protest targeting Jack Steele’s show is planned for today, August 9, at 2 p.m. in front of the building. A demonstration permit has been granted for the sidewalk of the Avenue of the Americas between 49th and 50th Streets. We ask all employees to use the side entrances of the building in order to avoid protestors and to use discretion in displaying your Liberty News identification badges when entering and exiting the building. Liberty News is working with the New York City Police Department to ensure the safety of all employees during the protest.

Jack Steele was a loudmouthed cable host, but he was our loudmouthed cable host. Anchor of
Steele Yourself,
which aired every night at eight. The man had more than three million viewers a night, or at least he had a year ago. Over the last six months his numbers had been dropping. No one could point to a specific reason, but his audience was slowly eroding.

I looked over at him. He was rattled.

“No. But something’s going on here, Sam. When I asked for a hint, Wade kept saying we need to buy this. Like
us,
Liberty.”

“That his usual sales pitch?”

“I think that was the hint,” Charlie said.