Colette and the Silver Samovar 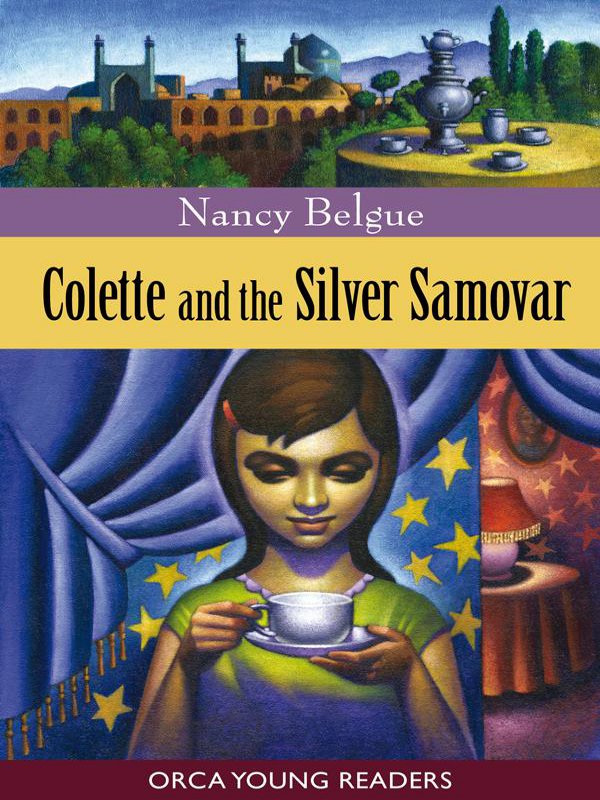 Colette
and the
Silver Samovar

Colette
and the
Silver Samovar

Summary
: Colette's family is torn apart by events and attitudes she cannot control, but she is determined to find a way to mend the rifts that threaten to destroy the people she loves.

Orca Book Publishers is dedicated to preserving the environment and has printed this book
on paper certified by the Forest Stewardship Council.

This morning, when the elevator in my apartment got stuck between the twelfth and the fourteenth floors, right where thirteen should have been, I knew right away that something bad was going to happen.

There were two other people in the elevator with me: Mr. Singh, who lives on the same floor as my family and me, and Auntie Graves, an old lady who reminds me of a little brown mouse. When the elevator bounced to a stop, she started moaning and shivering. Mr. Singh kept telling her that everything was going to be all right. He pressed the red button, and a loud alarm started ringing. This made Auntie Graves sink to the ground and start beating at her chest with her fist.

I plopped right down beside her. “This happens all the time,” I said. “My father says this old building is run-down. He says it is just a matter of time before it is condemned.” Auntie Graves covered her face with her hands and moaned. Mr. Singh shook his head and shushed me.

“See how we're stuck between twelve and fourteen, right where the thirteenth floor should be? Do you know that the number
thirteen
is unlucky?” I asked.

Auntie Graves began rocking back and forth.

“Some airports don't even have a terminal thirteen,” I said. “And some streets don't have a house numbered thirteen. Race-car drivers never choose that number for their cars.” I was just warming up, but Mr. Singh grabbed my arm and pulled me up.

“You need to stop talking now,” he said. Mr. Singh has serious brown eyes and a snowy turban on his head. He has a gentle voice and always gives me wrapped candies, but today he was looking very stern.

“She's hyperventilating,” I pointed out. That's when people breathe too fast because they are scared. I know all about this because I am going to be a writer, and I once made a character in a story I wrote hyperventilate because she saw a ghost! I even made that character faint!

Mr. Singh knelt down and told Auntie Graves to put her head between her knees and breathe slowly. He was a doctor in Pakistan, but now he works as a janitor.

I watched with interest as she tried this. When I wrote my story, I found out that one of the ways to help someone who is hyperventilating is to give them a paper bag to breathe into, so I opened my backpack and took out my lunch. I dumped it on the elevator floor and gave the paper bag to Auntie Graves. I liked Mr. Singh and didn't want him to be mad at me.

The electricity started humming, and the cables began to move. The elevator started up with a heave-ho. I'd been trapped on a roller coaster once, and it had started in the same wayâwith a big jerk. When we got to the ground floor, a crowd of people was standing in the lobby. Mr. Singh helped Auntie Graves over to a rickety chair, and she sat down, still clutching my paper bag.

He turned to me and said, “You are lovely child. Talk too much sometimes.”

My father says that I need to learn discretion. That's a fancy word for knowing when to say something and when to keep your mouth shut.

I find that very hard to do.

There are lots of things I find hard to do. I find it hard not to tell everyone that I am going to be a writer. My father says I shouldn't show off. He thinks I have too much confidence sometimes. He says I should be more modest. Modest is when you pretend you aren't as smart as you are. Or pretend that you aren't proud of something you've done. My mother says modesty is overrated, and it is good to believe in yourself.

My mother is superstitious too. She was the one who told me that we don't have a thirteenth floor in our apartment building because the number
thirteen
is unlucky. Most people don't know why thirteen is unlucky. Because I'm going to be a writer, I am also very inquisitive. That's when you ask a lot of questions so you can find out what's going on. My father says this is also called being nosy.

Well, anyway, maybe it's because I'm nosy that I asked my teacher why thirteen is unlucky, and she told me that no one really knows. But some people think it's because there were thirteen people at the Last Supper. Then she said some people think it's because twelve is a perfect number, and thirteen is the bad number that comes after it. She told me that people are so superstitious about the number
thirteen
that they don't even have thirteenth floors in apartment buildings. But I already knew that!

My father says we are only going to live in this old building until things get better. But my mother says it doesn't matter where we live as long as we're together. I like where I live because there is always something exciting happening. Our apartment is downtown in a big city called Toronto. My mother didn't come from this part of the city though. I know this because I overheard Luella, who runs the convenience store on the corner, telling Mrs. Singh that my mother came from a place called Rosedale. Then Luella raised her eyebrows, stuck her nose in the air and pretended she was drinking tea, with one little finger crooked. Once my mother took me on the subway to a doctor, and I saw signs for a stop called Rosedale. I asked her if this was where she came from. She looked at me like I was a mind reader, and so I had to tell her what Luella had said. That's when my mother told me that she had grown up there. All I could see from the subway were lots of green trees and some fancy stores. It didn't seem that strange a place to me. My mother also said her mother and father still lived on one of these streets. I asked her why we never saw them if they live so close by. And she told me that they got mad at her when she married my father.

“They didn't like your father, because he was different from them,” she said. Her eyes were very sad when she said this.

“What's so different about Dad?” I asked. “Is it because he's stubborn?”

My mother shook her head.

“No, Colette,” my mother said. “They only met him once. But there was a big argument, my parents forbade me to marry him, and he stormed out.”

She took a deep, shaky breath and looked like she might cry, so I stopped asking questions, even though there was so much more I wanted to know.

The Crazed by Ha Jin
To Die For by Phillip Hunter
High by LP Lovell
His to Claim #5: Breaking Storm by Opal Carew
Diagnosis Death by Richard L. Mabry
Dominant for the Night (For The Night #7) by C. J. Fallowfield
Novak by Steele, Suzanne
Gracie's Touch Zion Warriors 1 by S E Smith
Long Road Home by Maya Banks
Sugar Rush by Elaine Overton
Our partner