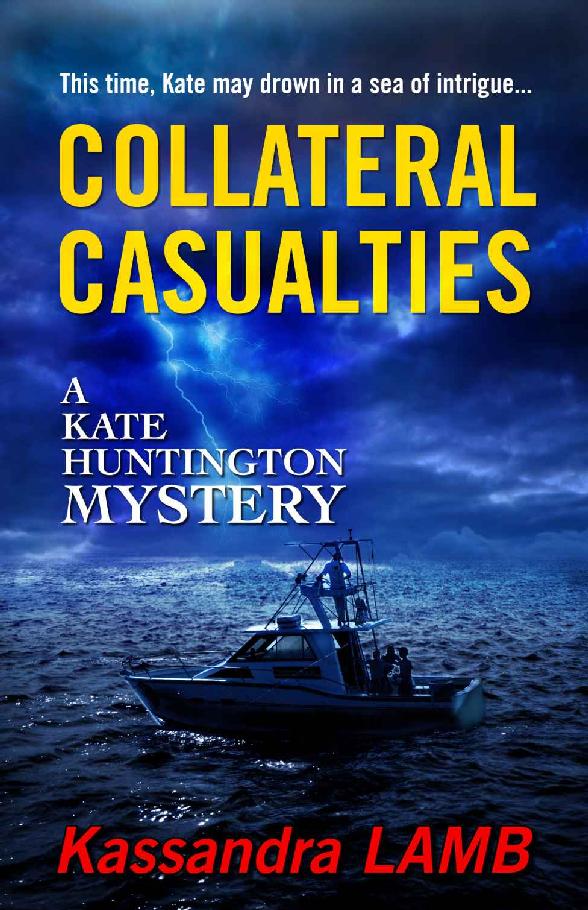 A Kate on Vacation Novella:

An Unsaintly Season in St. Augustine

All Rights Reserved. No part of this book may be used, transmitted, stored, distributed or reproduced in any manner whatsoever without the writer’s written permission, except very short excerpts for reviews.

Collateral Casualties
is a work of fiction. Names, characters, and events are all products of the author’s imagination. Any resemblance to actual events or people, living or dead, is entirely coincidental. Some places are fictitious; in other instances, real places are used fictitiously.

This book is dedicated to all my clients

who worked so hard in therapy to transform

themselves and their lives;

and to the people of Colombia,

who have suffered too much for too long.

The man ran through the wooded park. Despite the cooler than normal day, his hair was plastered to his sweating skull. Adrenaline surged through his system.

He felt himself sliding into the zone, the rhythm of his feet slapping against the hardened dirt, in sync with his breathing–inhale, slap, slap, exhale, slap, slap.

He glanced ahead. This was his favorite stretch of trail, looping through the untamed western-most section of Patapsco State Park. The narrow path was carved out of the side of a ridge, a wall of slate and clay to his left and the embankment down to the river on his right. His foot kicked a small stone. It flew over the edge and rattled down through dry weeds. He was several steps further along before he heard it hit the water below with a soft plop.

He was considering picking up his pace on the straightaway–maybe he could beat his personal best–when he glanced up again. The decision was taken out of his hands. A man on a mountain bike was headed his way, helmeted head down, pumping hard.

Slowing his pace, the runner moved to the right side of the path to give him room to pass. The cyclist kept coming full tilt down the center of the trail.

Doesn’t he see me?

“Hey,” he yelled with as much breath as he could muster.

The cyclist, head still down, seemed to pedal faster.

Now slowed to a jog, the runner moved onto the strip of scraggly grass between the path and the drop-off. “Hey!” he yelled louder.

The cyclist, less than thirty feet away and closing fast, finally looked up. Aviator sunglasses covered most of his face.

Hope he doesn’t wipe out when he hits the brakes.

There was a quick flash of white across the cyclist’s lower face, then he ducked his head and kept pedaling.

Survival instinct overrode confusion. The runner dove off the bank.

He had no idea how long he’d been out. His training kicked in, despite his fuzzy brain and the years that had intervened since he’d last used that training.

Lie still. Assess the damage. Locate the enemy before you give away your position.

His head hurt like hell. Something warm and sticky oozed down his cheek. His body ached in multiple places, but there was no screaming pain. Probably no broken bones or major lacerations. Just the sting of many smaller cuts and scrapes.

It took a moment for him to realize that his feet were higher than his head. Water lapped against his left arm, flung out to his side. Something slithered along his wrist. He fought the urge to flinch away.

There were no sounds other than those made by the river. Either the creatures of the woods were still reacting to his swan dive off the cliff or his assailant was nearby.

Opening one eye a slit, he gave his brain a moment to process what he saw. A trail of flattened weeds, crushed underbrush and scraped earth, punctuated by a few jutting rocks, marked the path of his descent. Almost at the top of the image being projected into his brain were the toes of white sneakers, hanging slightly over the edge of the embankment.

He slowly opened his eye a bit further, until he could see the owner of the sneakers. Black track suit, fingerless black biking gloves, the sunglasses and red helmet still in place.

A flash of white teeth against darker skin, then the man turned away.

Lying still as death, the runner watched the top of the bank through one slitted eye until the bushes began to rustle and a bird chirped in one of the trees along the riverbank.

She’d been looking forward to this evening all day. Not that she was happy about her husband working on a Sunday night, but an evening all to herself was a rare treat.

Once the kids were tucked into bed and Maria had retreated to her third-floor apartment, Kate had put on her old chenille robe and stretched out on the bed to read, a glass of wine within easy reach on the nightstand. She’d added her sigh to the soft moans and creaks of the old Victorian house settling down for the night.

But she couldn’t concentrate on the damn book. She kept thinking about the man she was having lunch with the next day. Pursing her lips, she gave up and put the book down. She took a sip of wine and let her mind wander where it was determined to go anyway.

After all, it wasn’t as if her memories of the man were unpleasant. Well, one of them wasn’t totally pleasant. Miller Dawson had scared the crap out of her during his first session at the trauma recovery center where she’d worked.

Just two years out of grad school, she hadn’t always felt the confidence in her skills that she pretended to have. But her boss, Sally Ford, had told her repeatedly, “You have to
act
like you know what you’re doing. About twenty five percent of the effectiveness of therapy is due to the client’s
belief
that it’s going to work and their trust in you, the therapist.”

Another fifty percent, according to Sally, depended on the client’s own motivation to change. Only about twenty percent was due to the therapist’s skill level. Sally’s advice had both reassured and humbled Kate. In other words, she didn’t have nearly as much to do with whether or not her clients got better as she thought she did.

Novice Kate hadn’t had the nerve to ask about the remaining five percent, but the more experienced Kate of today knew what Sally’s answer would have been. That last five percent was due to dumb luck. Or one might prefer to think of it as divine intervention.

In Miller’s case, Kate knew his success was eighty percent his own determination, with a healthy dose of dumb luck/divine intervention thrown in.
Maybe
two percent had been due to her actual skill at the time as a therapist.

His Aryan good looks and suave charm had thrown her a bit, during that first session, as she tried to figure out if he was coming on to her.

He’d just had another romance fall apart and wanted to figure out what he was doing wrong. So far, so good. That was a common enough reason for people to seek therapy.

His most recent ex had accused him of being insufferably overbearing, egotistical and sometimes downright verbally abusive. Oh, and by the way, he informed his new therapist, he was awaiting trial on stalking charges for harassing this same ex-girlfriend.

Kate had gulped a little. “Have past girlfriends said anything like that?”

She’d expected a denial but instead he casually replied, “Oh yeah. Especially the egotistical part. But I figure if you’ve got it, flaunt it.”

Oookkaay, bolstering self-esteem apparently didn’t need to be on their list of therapeutic goals. Or was this just narcissistic bluster to cover up self-doubt?

“And what exactly do you feel you have to flaunt?” Kate hoped her tone sounded neither sarcastic nor flirtatious.

Miller held out his arms, as if to say,
Just look at me
. “And I’m very successful at what I do.”

“And what is it that you do?” Kate had asked, thankful for the segue into the next part of the intake interview, getting a personal and family history. With men, starting with their work history was often a good way to get them talking.

Miller grinned. “I could tell ya, but then I’d have ta kill ya.”

Kate let out a nervous laugh.

“I’m not completely joking. My work’s classified. Currently I’m attached to an office at NSA. You know what that is?”

Kate nodded. Most Marylanders knew that the National Security Agency was housed at Fort Meade, and that the intelligence-gathering organization was quite hush-hush about what it did and how it did it. “You said ‘currently.’ What have you done in the past?”

“Well, I’m a lieutenant in the Army Reserves. I was on active duty during Desert Storm. Saw my share of action there. Before that I was... I guess you could say a ‘consultant’.” Miller made quotation marks in the air. “Worked for a government agency that I definitely can’t tell you about unless I’m willing to kill you. They paid very well if you did good work for them. And I did good work. I took out some bad guys in several places I can’t admit I’ve ever visited.”

Kate had tried not to stutter. “What do you mean by ‘took out’?”

He looked at her as if she didn’t speak English. “I killed them.”

She gasped. “You were a paid assassin for the government?”

He’d given her a mock-insulted look. “
Assassin
is such an ugly word. I prefer
operative.
And yes, I was a mercenary for the good ole U.S.A. But make no mistake, the guys I took out were evil. We’re sitting here today enjoying our freedom because they never got a chance to do the things they were planning to do.”

Kate took another sip of wine and smiled at her naiveté back then. She had literally run to Sally’s office as soon as Miller’s heels cleared the center’s outer door. As she told her boss about this new client, she
had
actually stuttered. “I th-think he’s a-a psychopath, S-Sally.”

“Maybe, or possibly just a narcissist with a capital N.” Then Sally had suggested a question Kate could ask Mr. Dawson the next time he came in, to assess if the man had a conscience.

She’d begged her boss to take over the case.

“Not yet. See what he says when you ask him that. And try to be a bit subtle, so he doesn’t catch on to the reason you’re asking.”

“And how am I going to do that? How do you
subtly
ask a guy, ‘If you found a wallet on the ground, would you try to find its owner or would you just take out any cash and throw it away?’”

Sally chuckled. “Make up some other random questions and tell him it’s a psychological test you’re required to give to all clients. Then watch his body language. Is he sincere, or does he just
seem
to be sincere? But keep in mind that psychopaths are excellent liars. You know what to look for when someone is lying?”