Collision: The Battle for Darracia - Book 2 (The Darracia Saga) 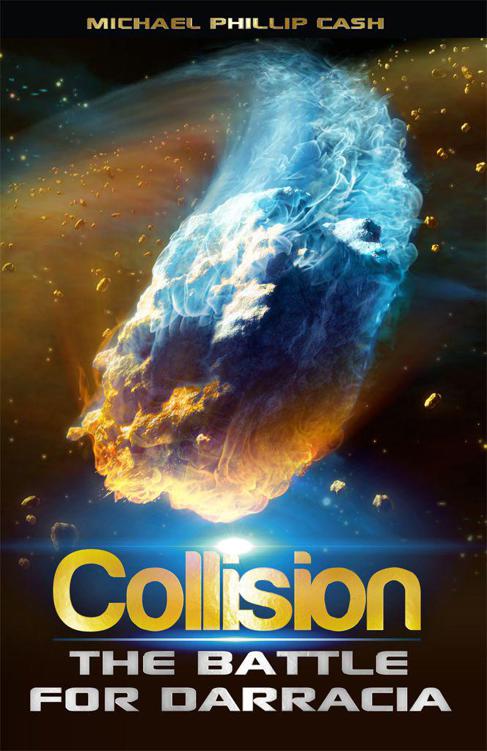 The Battle for Darracia

The characters and events portrayed in this book are fictitious. Any resemblance to real persons, living or dead
on Earth or on Darracia
, is coincidental and not intended by the author.

I smile because you are my sister; I laugh because there is nothing you can do about it!

If you find this book enjoyable, I really hope you’ll
leave a review on Amazon, Goodreads, or Barnes &
Noble under
Collision: The Battle for Darracia,
Book 2
. If you have any questions or comments,
please contact me directly at
[email protected]
.

X: A Firsthand Account of the Great Cicada Invasion

1. an instance of one moving object or person striking violently against another

When you’re drowning, you don’t say “I would be incredibly pleased if someone would have the foresight to notice me drowning and come and help me,” you just scream.

The shores of Fon Reni were fine black sand dotted with purple sea glass that littered the barren beach. Stars lettered the velvet sky, here and there a shooting cosmic spray spread across the inky darkness, illuminating the still night. It was quiet here, the distant planet devoid of life, save the lonely inhabitants who lived on the beach, footprints washed away by the icy seas.

He had constructed a crude hut for his guest using the fronds on the leafy trees that populated the jungles. Zayden slept under the night stars, enjoying the peaceful freedom of the beach. Living on what he hunted, he reveled in the quiet of Fon Reni, knowing it was far from Darracia, his troubles, and the memories. He was tired, exhausted by grief, angry with his lack of solution.

Staf Nuen had disappeared. It was as though he had never existed. Zayden had spent almost a year
tracking him, coming up with nothing but dead ends. He had traveled from one end of the solar system to the other, living by his wits, surviving hand to mouth, always just missing him. He must have gotten close, because he was jumped outside a graphen den on the planet Venturian. He woke up, disoriented, shamefaced, with his newfound friend, Denita, and with a colorful tattoo on his biceps. He watched the ripples rise from the dark sand, the heat sucking the air from his lungs. It was as hot as a furnace. He wore just his trousers, naked from the waist up, so he could see the stupid tattoo taking up most of his shoulder. The bruises on his torso had faded a bit, but his face still looked as battered as an old suitcase. Sweat evaporated as soon as it appeared, and he let the hot air roast him. He heard the foliage rustle behind him, made a face, then laughed softly at the curse he heard muttered behind the screen of the dense brush.

There were fourteen planets in his solar system, Darracia being his native one. He had left it in search
of his uncle Staf Nuen, who had killed his father, King Drakko, leaving his legitimate half brother V’sair the reigning king. V’sair pleaded with him to stay as his advisor, Zayden remembered, rubbing the still raw scar that bisected his once handsome face. The new king had appointed him grand mestor, Zayden thought with chagrin. Imagine that, the bastard of King Drakko was offered the highest position in the land.

He drew aimlessly in the dark sand with a broken stick. He didn’t want it. He didn’t want any part of it until he could bring Staf Nuen to justice. It was because of his uncle’s overthrow that his beloved Hilde was slain, killed by her psychotic brother when she protected Zayden from a death blow of a Fireblade. Clenching his hands into useless fists, he relived the last moments of her life. The empty socket where his amber eye used to be throbbed as though a thousand pickaxes were stabbing it. Pressing deeply with his palms, he covered his eyes, trying to blot out the images imprinted on his brain.
Blood, blood, and more blood, coupled with Hilde’s dying gasp as she collapsed into his arms, a sword robbing him of his future with the only woman he ever felt he could love.

He glanced at his discarded Fireblade, thrown negligently on the sandy ground. He hadn’t used it since that day, preferring the heavy pistol strapped to the side of his leg. Darracians disdained guns. Swords were for warriors, guns for cowards, he had been taught. His people valued the skill one developed with a blade, never respecting those beings who just aimed and fired. Guns were illegal at home, the punishment fierce if one was caught with such a firearm. His father had taught him it was dishonorable; if a warrior fought in combat, he must be engaged with his opponent, feel the heat of battle. Guns made warfare impersonal; there was no honor to kill without knowing the skill of your enemy. It showed lack of respect for the ideals of battle. That was why only a small part of the population knew how to fight with the Fireblade—it kept violence at a
minimum. Darracian warriors were taught to uphold justice, never kill for personal gain, and until his uncle had tried to overthrow the government, Darracia had been a relatively mild place to live. He had picked up the gun on the lawless space station, Pagil 7, far from the rules of Darracia.

After V’sair had rocked the foundation of the beliefs about the Fireblade, Zayden didn’t want it anymore. It seemed that Darracians had gotten it all wrong. Chanters from all over his former home were meeting, trying to make sense out of the Sradda Doctrines. There were forums and debates; all the schools were rereading and trying to find new ways to interpret the messages of the Elements. Well, he didn’t give a crap about all that religious stuff. His faith died when Hilde perished. He didn’t know why he hadn’t jettisoned the Fireblade from his portal as he traveled through deep space. He shrugged his broad shoulders, thinking perhaps because it was presented to him by his late father when he achieved his highest honors, and he was a sentimental fool,
after all. He felt naked without it. He eyed his sword with resentment. Denita should never have taken it from the thug who tried to kill him. She should have left both him and the Fireblade to rot on the filthy streets of Venturian. Zayden sighed gustily. So here he sat, on the desolate beach of Fon Reni, reliving his nightmare and waiting for a sign. A signal for him to find Staf Nuen and kill him with his bare hands.

He watched the progress of the silver crabs as they clawed their way up the dark sand of the beach. The tiny feet worked in unison, scrabbling through dense patches of seaweed. There were hundreds of them. He tapped his stick thoughtfully. Well, he wouldn’t have to work very hard for their dinner tonight. Pushing himself onto his feet, he stretched widely, feeling his cramped muscles expand and his bones crack. His head still ached where he’d been beaten, and his ribs reminded him they weren’t all that healed after all. He grabbed a rush basket and then began to pluck the crabs from the ground until his
container was a swirling mass of nervous creatures trying to escape. He placed them over the fire he had built earlier in an old helmet he used as a pot. Soon, he heard the crackle and hiss of their bursting shells, their color changing to an appetizing light green. He thought to call out that dinner was ready, but shrugged instead, plopping down on the sand to eat alone. That’s how he wanted to eat, by himself. His guest was nothing more than an encumbrance. He sneered at the dense forest behind him. Carefully, he pulled a cooked crab out of his makeshift pot, singeing his fingers, catching the green juice of the dripping crustacean with his tongue.

The fire warmed him against the stiff ocean breeze, and memories of camping trips with his father and V’sair came rushing back like a tidal wave. They had stayed here, the three of them, on this very beach. V’sair was so young, his royal braid barely touching his shoulder. No servants were allowed, and though his father’s elite guards hovered in the sky above, they spent a sun-filled week on Fon Reni that
became a yearly ritual. They returned V’sair, to his mother’s horror, a lovely shade of brown, his light-tannish blue skin burned and toughened by the strong rays of both suns. It was a special spot for Zayden. Here he was just Drakko’s son and V’sair’s older brother, not the illegitimate offspring of the king and his laundress.

He had loved his father, as well as his royal younger brother, despite the differences in their stations, even though it appeared that he was the only one troubled by it. He was older by a good fifteen years, and he didn’t begrudge his younger sibling his inheritance; however, sometimes he admitted to himself that he felt invisible. It was funny, he mused, V’sair envied Zayden’s Darracian strength, and he valued what V’sair took most for granted, his assured place in Darracian hierarchy. Oh, V’sair always treated him with respect, had offered him the position of grand mestor, but Zayden knew what the others felt. He was seen as an interloper, barely tolerated despite the fact that he was one of the army’s fiercest warriors.
He constantly pushed himself to be faster with his Fireblade, the hardest rider when it came to his stallius, as well as the best jolter in the tournaments. He lived by his warrior’s creed, happy to make his father proud. He enjoyed showing them all his royal placement was earned with dedication and hard work. But somehow the dynamics of the Fireblade had changed now. It was not about brute strength and chivalry, so where did it leave him? He reached over to grab his sword and heard it hum to life, great red streaks lighting with energy. He knew now it was the wrong color. It was the shade of anger, not strength. Once, it had been the true blue of justice and a force to be reckoned with. His had always been the blue of a pure heart, even though he never realized what it meant. Now it blazed red, like his enemy’s. The Fireblade was about something else now, and he didn’t have the patience to try and understand. He was too tired. Angry and tired.

Sweetness by Pearlman, Jeff
Gin: The Much Lamented Death of Madam Geneva: The Eighteenth Century Gin Craze by Dillon, Patrick
Quarantine: A Novel by John Smolens
Sky Raiders by Brandon Mull
Doctor at Villa Ronda by Iris Danbury
The Istanbul Puzzle by Laurence O'Bryan
The Wishing Garden by Christy Yorke
Holiday in Danger by Marie Carnay
Possession by H.M. McQueen
A Necessary Action by Per Wahlöö
Our partner