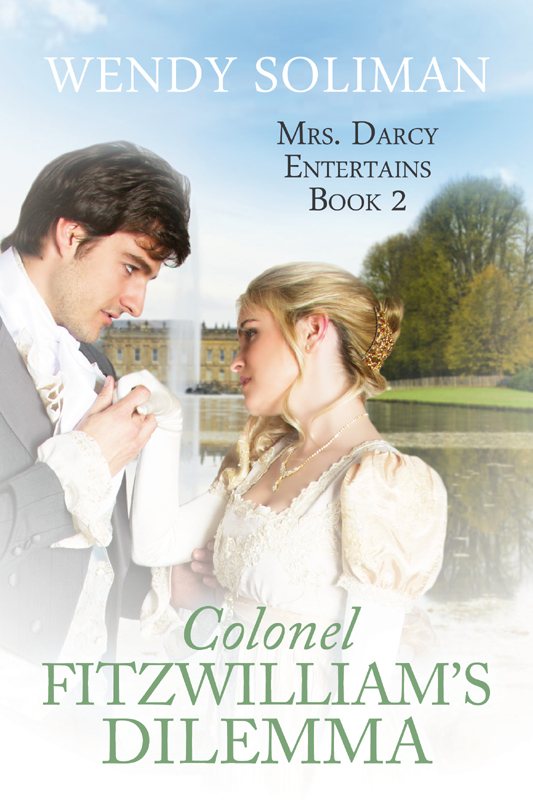 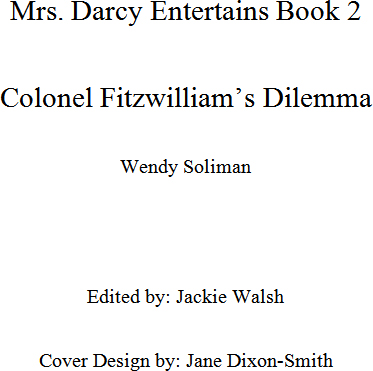 This e-Book is a work of fiction, based on the characters created by Jane Austen in her novel, Pride and Prejudice.

All rights reserved. No part of this publication may be reproduced, stored in a retrieval system, or transmitted in any form or by any method, electronic, mechanical, recording or otherwise without the prior written permission of

This book is licensed to the original purchaser only. Duplication or distribution via any means is illegal and a violation of International Copyright Law, subject to criminal prosecution and upon conviction fines and/or imprisonment. The e-Book cannot be legally loaned or given to others. No part of this e-Book can be shared or reproduced without the express permission of the author.

“We have cause for celebration.” Fitzwilliam Darcy looked up from the letter he was reading and smiled across the breakfast table at his wife.

“We do?” Lizzy returned his smile.

“Absolutely. We are restored to favour.”

“I was unaware we were out of favour.”

“Lady Catherine is to pay us a visit.”

“Ah, I see.” Lizzy arched a brow. “And to what do we owe this sudden change of heart? I was of the opinion I am disobliging and selfish, unworthy of her notice.”

“No!” Georgiana and Kitty were seated together on the opposite side of the table. They shared a glance, but it was Fitzwilliam’s sister Georgiana who cried out in passionate defence of Lizzy’s character. “Never. Not you, Lizzy.”

“Thank you, Georgie, but your aunt doesn’t share your good opinion of me, and nor will she. Not ever. In agreeing to become your brother’s wife I apparently demeaned the Darcy name beyond redemption.”

“Lady Catherine wanted Fitzwilliam for her daughter and isn’t used to being gainsaid. It was the silliest notion in the world, of course. Anyone with eyes in their head could see the union would never have worked.” Georgiana wrinkled her nose. “Anyone except Lady Catherine that is. She has always been blinded by her determination to have her own way.”

“Well, it sounds as though Lady Catherine has come to her senses,” Kitty Bennet, Lizzy’s younger sister, said.

“I doubt that. She was quite adamant that I placed a permanent blight upon the estate the moment I became Pemberley’s mistress.”

“She has clearly realised her mistake,” Will replied. “And wishes to tell us so in person.”

“Surely that is unnecessary?” Georgiana looked crestfallen. “She terrifies me.”

“I have never met her,” Kitty flashed a wary smile as she buttered a second slice of toast. “But from what I have heard about her, I am sure she will disapprove of everything I do.”

“Does she give a reason for her visit?” Lizzy asked. “Although I can probably guess.”

“She is in raptures over your condition.” Will fixed Lizzy with an intimate smile. “And wishes to heal the breach between us.”

Lizzy tossed her head. “That is very generous of her, considering it was she who created the breach in the first place.”

“Be that as it may, I cannot refuse to let her come.”

“No, of course not, and I would not have you do so.” Lizzy paused. “She heard about the forthcoming addition to our family from Charlotte Collins, presumably.”

“No, I wrote to inform her of it myself.”

“Oh, you didn’t mention it.” And Lizzy knew why her husband had remained silent on the point. If Lady Catherine had continued to cut Lizzy, Will would have preferred her not to know his olive branch had been ignored. Will, much as he would deny it if quizzed upon the subject, was more disturbed by the rift with his aunt than he would ever admit. “When can we expect her?”

“In about a week. They plan to make the journey in easy stages.”

“My cousin Anne will accompany her?” Georgiana asked. “And Mrs. Jenkinson too, I presume? Anne can never go anywhere without her faithful companion to fuss over her.”

“Georgie! That was almost a discourteous remark. I am sure Lady Catherine will say my bad influence is rubbing off on you if she hears you speak so flippantly.” Lizzy sent the younger woman a warm smile. “I, on the other hand, am very pleased with you. It proves you have already learned not to take everything you see at face value.”

“Oh, Lizzy, you know I didn’t mean anything by it. It is just that I sometimes think Anne is stifled by the constant attention she receives from Lady Catherine and Mrs. Jenkinson. She is so busy trying to live up to people’s expectations of her, she has no time to be herself.” Georgiana sighed. “Poor Anne. As if being heiress to such an extensive estate as Rosings isn’t enough of a burden. I should have hated to find myself in that position at Pemberley.”

Lizzy, who had thought much the same thing during her infamous visit to Rosings, was surprised by Georgiana’s perspicacity.

“Mrs. Jenkinson will not form part of their party.” Will waved Lady Catherine’s letter across the table. “My aunt dedicates a considerable part of her missive to complaining about her ill-usage at that particular lady’s hands.”

“Good heavens,” Lizzy said. “Has there been a falling out? I thought Lady Catherine and Mrs. Jenkinson were of one mind on all matters.”

“It seems blood is thicker than water. One of Mrs. Jenkinson’s nieces has married rather well and required a governess for her growing family. Mrs. Jenkinson felt unable to turn the position down.”

“From which one must surmise the niece didn’t marry
that
well and played upon her aunt’s strong family values to acquire a good governess at no cost.”

“Oh dear.” Georgiana’s eyes danced with mirth. “I still have a lot to learn from you, Lizzy. That idea would not have occurred to me.”

“I can assure you it has occurred to our aunt,” Will replied, “and she had a very great deal to say about undutiful servants who have no sense of loyalty.”

“No, they are to be accompanied by a gentleman.”

“Asquith?” Lizzy wrinkled her brow. “I have heard that name before. It came up in my correspondence with Charlotte Collins but I cannot think—”

“According to Lady Catherine, he is a gentleman in straitened circumstances. He applied to Mr. Collins for a position at the church school. Collins sought Lady Catherine’s advice on the matter naturally—”

“Lady Catherine insisted upon meeting the young man for herself, since she likes to concern herself with all the details of life in her part of Kent,” Will said. “He had been recommended to her as well apparently, although she does not say by whom.”

“It must have been someone whose opinion she respected,” Lizzy mused. “Or there again, perhaps she simply wanted to have the final say.”

“Which she did. She was so taken with Asquith, she engaged him as Mrs. Jenkinson’s replacement.”

“Anne de Bourgh has a male tutor.” Lizzy was shocked. “I can scarce believe it, although I am sure it will do her the world of good.”

“I dare say there is a maid present at all their tutorials,” Will replied, “but it seems Asquith is well-educated, well-travelled, sensible, and deferential. He will travel with them and make all the necessary arrangements for their comfort at the various posting inns on their route.”

“And Lady Catherine’s coachman could not have done that for her?” Lizzy lifted her shoulders. “Still, I confess to a great curiosity about the young man and look forward to making Mr. Asquith’s acquaintance. Although any man who meets with Lady Catherine’s approval will, of course, be meek and obsequious. Anne will be in no danger of corruption from contact with him, I am absolutely sure about that.”

“Do you not find this departure on Lady Catherine’s part intriguing?” Will asked. “I, for one, would never have predicted it.”

“Nor I,” Lizzy agreed. “And I anticipate being entertained by it, especially since I recall now that Charlotte told me Mr. Collins was quite put out by Mr. Asquith’s elevation to Lady Catherine’s inner circle.”

“Ah, now this starts to make more sense.” Will frowned as he continued to read. “It seems Colonel Fitzwilliam can be spared from his duties, and Lady Catherine has asked us to invite him to stay also.” He looked up from his letter, caught Lizzy’s eye, and his frown gave way to a smile. “Clearly he is now the favoured candidate for Anne’s hand, and she needs our help to persuade Fitzwilliam to see the advantages in such a match, although she would never admit to it of course.”

“She thinks you will encourage the colonel, I suppose,” Lizzy said.

“Then she is in for a disappointment. Fitzwilliam is his own man, and I wouldn’t seek to influence him, even if I thought it would do any good.”

“Are we expected to promote the romance during their stay at Pemberley, regardless of the feelings of those involved?” Lizzy exhaled. “In any case, invite the colonel by all means. I enjoy his society, even though I cannot help feeling sorry for his situation.”

“Save your sympathy, Lizzy. As I say, Fitzwilliam will not be coerced into a situation that doesn’t suit him, no matter how desperate his circumstances.”

“Well, in that case I shall not interfere and will allow true love to take its course. Speaking of which…” She turned towards Georgiana and Kitty with a mischievous smile. “If Colonel Fitzwilliam can be spared, I dare say Major Halstead and Captain Turner are due for a furlough as well.”

Both girls brightened and then blushed at the mention of those gentlemen’s names. They had been guests at Lizzy’s first house party as mistress of Pemberley, six weeks previously, and had found great favour with Georgiana and Kitty. Will was still dubious about the major’s suitability for his sister, but Lizzy reasoned no man who took an interest in Georgiana would ever pass muster in her brother’s eyes.

“Do you think so?” Georgiana asked with such feigned casualness, Lizzy burst out laughing.

“I am sure there is every possibility. I shall write and invite Colonel Fitzwilliam and extend the invitation to include his two friends. It will be so much easier to entertain Lady Catherine if others are present.”

“I will not have you to over-exerting yourself,” Will replied, fixing Lizzy with a stern look.

“Oh, nonsense. I am as strong as an ox. Besides, since we are not to go to London for the season, it seems only fair the girls should have their share of entertainments.”

“And Jane and Mr. Bingley are now close by,” Kitty reminded them all. “I dare say they will not wish to leave Campton Park for very long, having only just moved into their new estate. But since it is only ten miles away, the journey will not be much of an inconvenience.”

“Jane’s condition is more advanced than mine, Kitty. We cannot expect her to gallivant all over the place just to oblige us.”

“No, of course not, but when she hears of your plans, I am sure she will wish to come.”

“Have you left your card with our new neighbours yet?” Will asked Lizzy.

“Actually, Georgie and I planned to call this morning.”

“I know Lord Briar and think well of him. I am glad he will be living so close. By all means include him in our entertainments if you find their society congenial.”

“Thank you. I am sure I shall, and Lady Catherine can hardly object to such eminent company.”