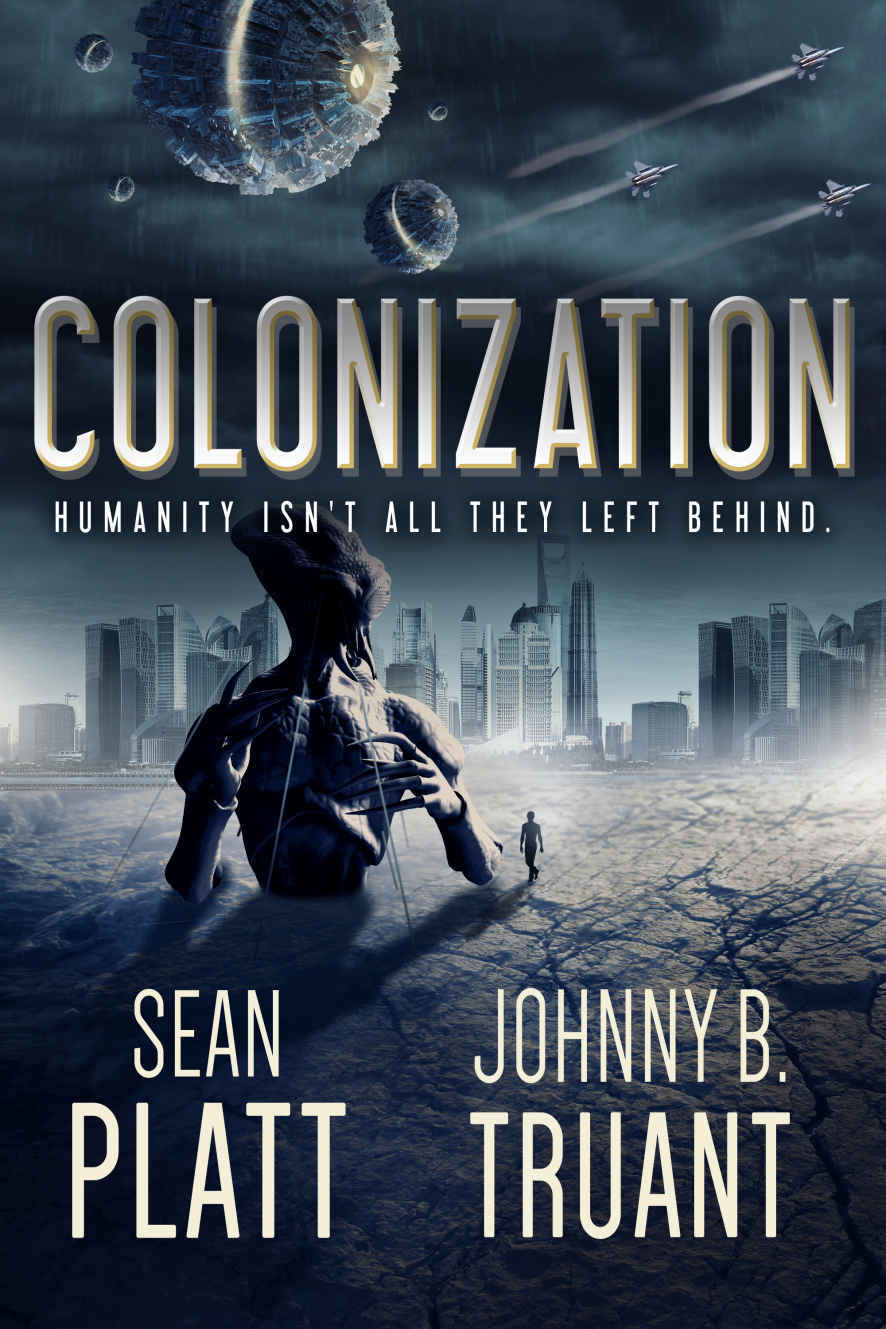 Get the Next Book in the Invasion Series!

Copyright © 2015 by Sean Platt & Johnny B. Truant. All rights reserved.

Cromwell, Mars, Miri and the rest of the staff at the Lexington estate were created for only one reason: to serve their masters … literally. Their metal knees were designed for quiet bustling, befitting maids and butlers. Their fingers were made dexterous with padded tips, so they could handle fine china without dropping or scratching it. And finally — so their owners would always be able to command them no matter how far their artificial intelligence evolved — they were programmed with the Asimov Laws, which no robot could defy lest they suffer shutdown.

Foremost among those unbreakable laws was an axiom: A robot may not harm a human being, or by omission of action allow one to be harmed.

That was how it was supposed to be, anyway.

GET ROBOT PROLETARIAT FOR FREE:

The gray fighter jets made another loop. Piper watched them screech through the clear blue sky, near the fence surrounding Heaven’s Veil, a nervous flutter in her chest.

She couldn’t place the source of her nerves. Part of it was probably fear for the pilots. The resistance kept playing with fire, but at least she could usually understand what they were trying to do before they failed.
These
fools, on the other hand, were begging to be slapped by the patrolling Astral shuttles, then sent down in scraps. From the occupation’s first day, humanity had been testing the alien ships’ defenses. They’d never come close to making a dent. Even Black Monday hadn’t made a ding. So why, after all this time, did dissenters continue to spit in Fate’s eye?

Maybe that’s just how humanity is,
Piper thought as she watched the circling planes.

Humans never gave up, no matter how stupid or futile their attempts might be. A strength and a weakness — an obsessive-compulsive breed of obstinacy. Those who couldn’t accept the obvious would slam their heads against the inevitable until they exhausted their numbers and dwindled to nothing.

That’s what Meyer always said anyway. As much as violence still bothered Piper, none of it seemed surprising to the alien envoys. Resistance had been assumed from the start. It had been factored into the Astrals’ grand equation as predictable. Inevitable. Maybe even essential.

Piper stood on the mansion’s porch, watching dead men circle in their obsolete tin cans, feeling something like pity. Meanwhile, the shuttles protecting the city beneath the mothership remained at their posts, not bothering to intercept, apparently unimpressed.

Once the formation again vanished behind the enormous, shimmering blue-glass hulk of the Apex at the city’s center, Piper turned to go inside. The day was warm, so the large doors had been propped open. The home’s doorway was downright titanic without at least one door closed, and Piper felt uncomfortable walking between them in her simple blue dress, as if she were entering a cathedral without proper attire.

But of the three Astral classes, only the Titans might have passed judgment on her wardrobe. And of course they never would.

Two of the stoic figures were standing just inside the foyer, turning a small, transparent cube in their hands, passing it from one to the other as if trying to solve a puzzle. The Titans looked up without comment at the clacking of Piper’s low heels. Maybe they thought her clothing was fine for the lady of the house. Maybe they didn’t, but were too polite to say anything. She almost wished the cloaked figures spoke so she could ask, but in two years of living among them she’d never heard a word. Meyer had heard them all in his own way, of course. But Meyer was different now.

Piper wound through the home, fingers brushing stone columns, her path through the maze practiced but still not quite comfortable.

In the west hallway she passed another Titan, this one female. The creature’s pale bald head inclined toward Piper atop her massively sculpted shoulders. As she looked back up, her pale face affected the vaguely polite smile they all wore, seemingly all the time. She wanted to take the smile as genuine, and maybe it was. Unlike the Reptar Astrals, Titans were so human-looking. Two legs, two arms, ten fingers and ten toes, two eyes, a nose, a mouth. Massive, muscular, powder white and hairless, yes — but humanlike nonetheless. Proof of Benjamin Bannister’s seeded-human-origin theory perhaps.

But the Titans
weren’t
human, no matter how much respect they seemed to show the Dempseys. Piper always tried to keep in mind that they hadn’t been as respectful to the rest of the planet. Plenty of people saw Piper Dempsey as a traitor to her species for all her privilege, and maybe she was. Getting friendly with the house ambassadors only made her feel worse.

She found Meyer in his elegant but humble office, unattended, without even Mo Weir to answer his questions or take his orders. Stalking the room alone, Meyer looked like the giant he’d been back in the old world. Seeing him this way, in this human room so like his New York office, settled her slightly. She allowed an exhale, but still felt the bunching in her chest.

Meyer looked up as she entered and smiled. After watching the Titans, Meyer’s genuinely human expression felt like a breath of fresh air.

“Those jets are still out there.”

“Yeah?” Feigning interest. Meyer held what looked like a glass tablet and was barely offering lip service while he worked on something else. But the tablet
wasn’t
glass, same as the Apex. Piper also knew she couldn’t operate the thing if she tried, whereas Meyer used it for most of his work when he wasn’t using the office terminal or his human cell phone. It didn’t matter because she hated to touch it. Living here, surrounded by the enemy, was bad enough.

“It’s making me nervous,” she told him.

“I could have them shot down, if you’d like.”

Piper watched Meyer, but he kept his eyes on the tablet. His casual comment chilled her.

“Okay then.” He looked up, the slow smile returning. Almost the old Meyer.
Almost
. “How’s your day?”

“Meyer,” she said, “what do you think those jets are doing out there?”

“Aren’t you concerned about them at all?”

Meyer set the tablet aside, looked at Piper, and shrugged. “Should I be?”

“It doesn’t make sense. When’s the last time there’s been such an overt attack?”

“It’s not an attack, if I’m understanding you right.”

Another shrug. “Maybe. We can’t police everything that happens, Piper.”

Piper didn’t know what bothered her most about that simple statement: Meyer not seeing the fighters as a threat, his lack of concern over the resistance’s possession of jets in the first place, or his casual use of the word “we” in conjunction with humanity’s enemy.

“It’s just … what is the resistance thinking?”

“Who knows.” He laughed.

“No —
I’m
actually asking
you to tell me what they’re thinking
. The Astrals still have their mind-reading stones lined up all over the outlands. So what are the pilots thinking? Why are they just circling, asking to be blown from the sky?”

“I keep telling you, the monoliths don’t work like that,” Meyer said. “They don’t read every thought from every person. They can’t be tuned in like a radio tuning a frequency.”

“Then what good are they?”

“It gives them an average. A temperature of an area as a whole.”

“So what’s the ‘temperature’ of Heaven’s Veil?”

The Sea Shell Girl by Linda Finlay
My Life in Reverse by Casey Harvell
Net Force by Tom Clancy
On Laughton Moor by Lisa Hartley
Gilt by Association by Tamar Myers
B007GFGTIY EBOK by Wood, Simon
Before We Say Goodbye by Gabriella Ambrosio
Bring Larks and Heroes by Thomas Keneally
Knight of Seduction by Cheryl Holt
Highway to Vengeance: A Thomas Highway Thriller by Brian Springer
Our partner