Read Come and Talk to Me Online

Come and Talk to Me 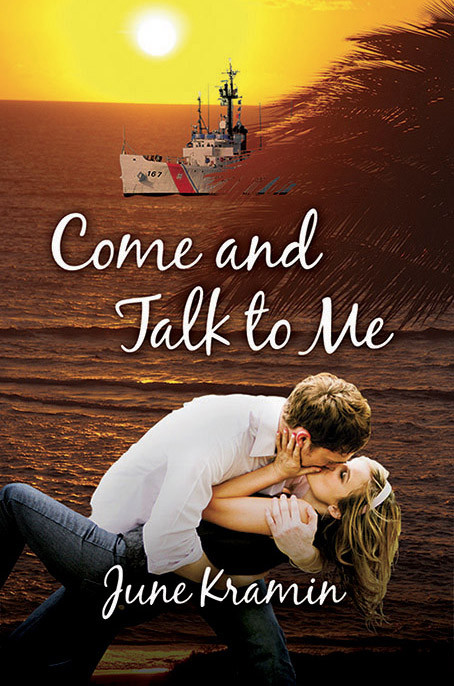 Come and Talk to Me

First published by Writers AMuse Me, May 2012

For the man of my dreams. Of course in my dreams, you do have that sexy accent ;)

We all know the song, Army, Navy, Air Force, Marines…What many of you may not realize is that the Coast Guard is also part of our Military Forces.

This book is a work of fiction. No ill will is meant toward the VA that serves our wonderful, selfless soldiers. I also dedicate this story to our soldiers and the wives who await their safe return, as well as the doctors that patch them back up.

T
WICE
I
N
R
EGGIE’S
L
IFE
she had long drives alone during which she reflected on her life with Van. First was the drive to Fargo, where she would be waiting for him to come out of surgery. The second was her drive to Colorado to start a new life, after he didn’t.

There was a pause before he answered. “Go ahead and get it, but then come straight here.”

Reggie arrived home fifteen minutes later. She put the pizza on the table and went to her knees at his side. “It’s that bad again?”

“The dammit-alls aren’t helping at all,” he replied with tear-filled eyes. Dammit-all was what they had named his newest pain pills.

“Dammit, Van. I knew you needed more than just another type of pill for the pain. Something has to be seriously wrong. I know that crap is going to mess with your kidneys or something.”

“I’m sorry. You’re my tough guy. I hate seeing you like this.” Reggie stroked his hair as her memory drifted to the first time they met and she witnessed just how strong he was.

Regina was at a friend’s house for a Girl’s Day brunch. In Hawaii, people adopted a lot of other country’s customs; it was a Japanese custom that March third was Girl’s Day. She always made it a point to get together with at least one of her girlfriends to celebrate. She was looking forward to an afternoon of champagne, cheeses, fruits and chocolates with her best friend, Sabrina. When she arrived at Sabrina’s house, she found something even yummier on the menu—Donovan.

“Who’s that, Bri?” Reggie asked her friend as she looked out the picture window into the backyard.

“Scrumptious isn’t he? That’s Troy’s friend, Donovan. He was stationed here from Minnesota a few weeks ago.”

The girls continued to observe the demolition from inside, watching through the sliding glass door that faced the backyard. Sabrina’s husband, Troy, played supervisor while Donovan slammed a sledgehammer into an existing sidewalk. He was almost as big as Van, but he was busy calculating figures while Van took charge of the muscle work.

“Why are you ripping out a perfectly good sidewalk, Bri?”

“Troy wants to lay down some fancy-schmancy brickwork. He was going to talk to you about getting a good deal for him.”

“That boy has too much time on his hands on his days off. Stay away from military boys, Reggie. The schedules will make you crazy.”

After a couple glasses of champagne, Regina became brave and went outside. She walked to where the activity was, but kept her distance in case some concrete came flying her way. After the sledgehammer came down, she stepped closer. Donovan looked up and let go of the hammer. He moved his sunglasses down his nose, giving her an obvious once over.

“Hello there,” he said, once he got his fill and pushed his sunglasses to the top of his head. He liked what he saw. She was barely over five feet tall and had zero body fat. Her tight tank top and shorts left nothing to the imagination. He imagined her breasts would fill his hands nicely and although he didn’t want her to leave yet, he couldn’t wait to get a look at that ass. Her thick blonde hair reached her waist. He liked the way it moved with the breeze.

“You know, they make a tool for that. I believe it’s called a jackhammer.”

“Why would I pay good money and rent a jackhammer when I have a Van?” Troy laughed as he walked over and gave her a kiss on the cheek. “How you doing, princess? You here to corrupt my wife with another Girl’s Day escapade?”

“Donovan,” he said as he put his hand out to shake hers. “Van has stuck since grade school. Reggie?”

“Regina.” She accepted his hand. “I prefer Reggie.”

“Reggie it is.” He brought her hand to his lips.

She pulled her hand away and tucked her hair behind her ears.

“Do you want me to get you another pill?” Reggie asked.

“Twice the dose? And it’s not helping?” He shook his head ‘no’ and buried his face in the carpet. “When did you eat last?”

He replied a muffled, “Breakfast,” into the carpet.

She stood up, grabbed a piece of pizza and brought it to him. Holding it at his mouth, she ordered him to take a bite. “All that medication will rip apart your stomach.”

Reluctantly he bit into it then once again buried his face.

“I’m going to take you to the ER.” When he didn’t reply she asked, “Okay?” He nodded. She mumbled, “Shit.” Van was sick of doctors and normally didn’t want anything to do with them if he could avoid it. If he agreed to go, he was in bad shape.

Reggie picked up the phone and called their friend that lived closest. He was also Van’s boss. “Alex?”

“I need you and someone bigger than you to come help me take Van to the hospital.”

“It’s bad. Is there someone you can call? He’s going to need help getting in the car.”

“There is. We’ll be there in five minutes. Hang tight, girlfriend.”

“Thanks.” Alex was a great friend but he was barely taller than her. His wife had him beat by a couple inches. What he lacked in height, he made up for in heart. The couple had been great friends to them since they had moved to Minnesota. In a community where not everyone was the most welcoming, Alex and Kirsten had open arms for them. The couples often spent weekends playing Whist well past midnight while downing Linenkugels ‘tackle boxes’ that offered a type of beer to please everyone. It was Alex who got Van interested in computers and later hired him at his store.

Alex brought a neighbor of theirs who was, by chance, a male nurse. He was built like Van, but a little on the heavyset side. The two looked like quite the pair bounding through the door. Alex had stopped knocking long ago. Even if they still practiced that formality, the situation demanded hurrying in.

“How ya doing, big guy?” Alex asked as he knelt down by Van.

Alex softly chuckled and gave him a firm pat on the shoulder. “You remember my neighbor, Gary?”

“Yes. Please forgive me for not standing up,” he said with a moan.

“No worries, friend. Alex said this is a kind of reoccurring thing with you.”

“Did you do something today that you know would have brought this on?”

Van wasn’t normally short with anyone. He had a pleasant disposition and was usually first to offer a smile and a helping hand. He had to be in pain. Gary turned to Regina. “Gather up everything he’s on to bring along to the hospital. They’re going to want to know what he’s taken.” She ran to the bathroom with a plastic grocery bag to bring the various bottles of acetaminophen, ibuprofen, and codeine combinations as well as the ‘dammit-all.’ “We’re going to pick you up now. Brace yourself,” Gary said to Van.

The two men stood on each side and quickly brought him to his feet, which in turn brought a cry of pain from Van that made Reggie run out of the bathroom. She rushed over to Van and put her hand on his cheek.

“Holy shit. You are hurting,” she said, staring deep into his eyes.

He could no longer hold back the tears that had been building up; they finally rolled down his cheeks. “Just get me to the damn ER,” he said softly as if in defeat.

Reggie stared into Van’s light blue eyes as she took another sip of champagne. She liked the way the sun showed off the many shades of blond in his hair. Even the small beads of sweat forming on his forehead were sexy.
Yup. Must have had one too many glasses of champagne.

“You have any beer in there?” Van asked her.

Reggie put a hand to her hip. “I suppose you’ve put your club down so it’s now the woman’s job to fetch your drink?”

“Don’t let the blonde locks fool you for a second, Van. That woman is pure redhead. Watch out for the horns and fangs, too.”

“I resemble that remark,” Reggie said as she turned around with a grin. “I’ll be back with two beers anyway.”

“Thank you,” Van said under his breath, not for the offer of the beer, but for the view.

“Do the words balls and vice mean anything to you, buddy?” Troy asked.

“Wanna bet? I haven’t seen her date a guy in the two years I’ve known her. She has a real hellcat of an attitude toward anything with a penis. I’ve seen her chew them up and spit them back out faster than you can say ‘blue balls.’ She came here from Oahu, swearing off men and seems to be holding up to her word.”

“You some kind of glutton for punishment?”

Reggie came out with two beers as promised. “To think,” she said as she handed them each a beer, “I was worried the skills I learned cocktail waitressing all those years would have gone to waste.”

Van stepped closer to her. “Since that’s the case, be sure to come back later for a tip.”

She moved her sunglasses down her nose, as he had done earlier, and looked down so it was obvious where she was staring. Looking back up into Van’s eyes, she said, “I don’t accept small change.”

Troy was holding his side laughing. “What I tell ya, buddy? Ball buster.”

“Laugh away, my friend. That girl is mine.”

Once Upon a Marigold by Jean Ferris
The Millionaire's Forever by Sonya Weiss
Caressed by Night by Greene, Amanda J.
Lizzie's War by Rosie Clarke
Billion Dollar Cowboy by Carolyn Brown
Broken Heart 05 Over My Dead Body by Michele Bardsley
Seduced by the Scrum-Half (Strathstow Sharks) by Carter, Mina
Austerlitz: Napoleon and the Eagles of Europe by Ian Castle
Fatal Venture by Freeman Wills Crofts
The Country Club by Miller, Tim
Our partner