Read Come Down In Time (A Time Travel Romance) Online

Come Down In Time (A Time Travel Romance) 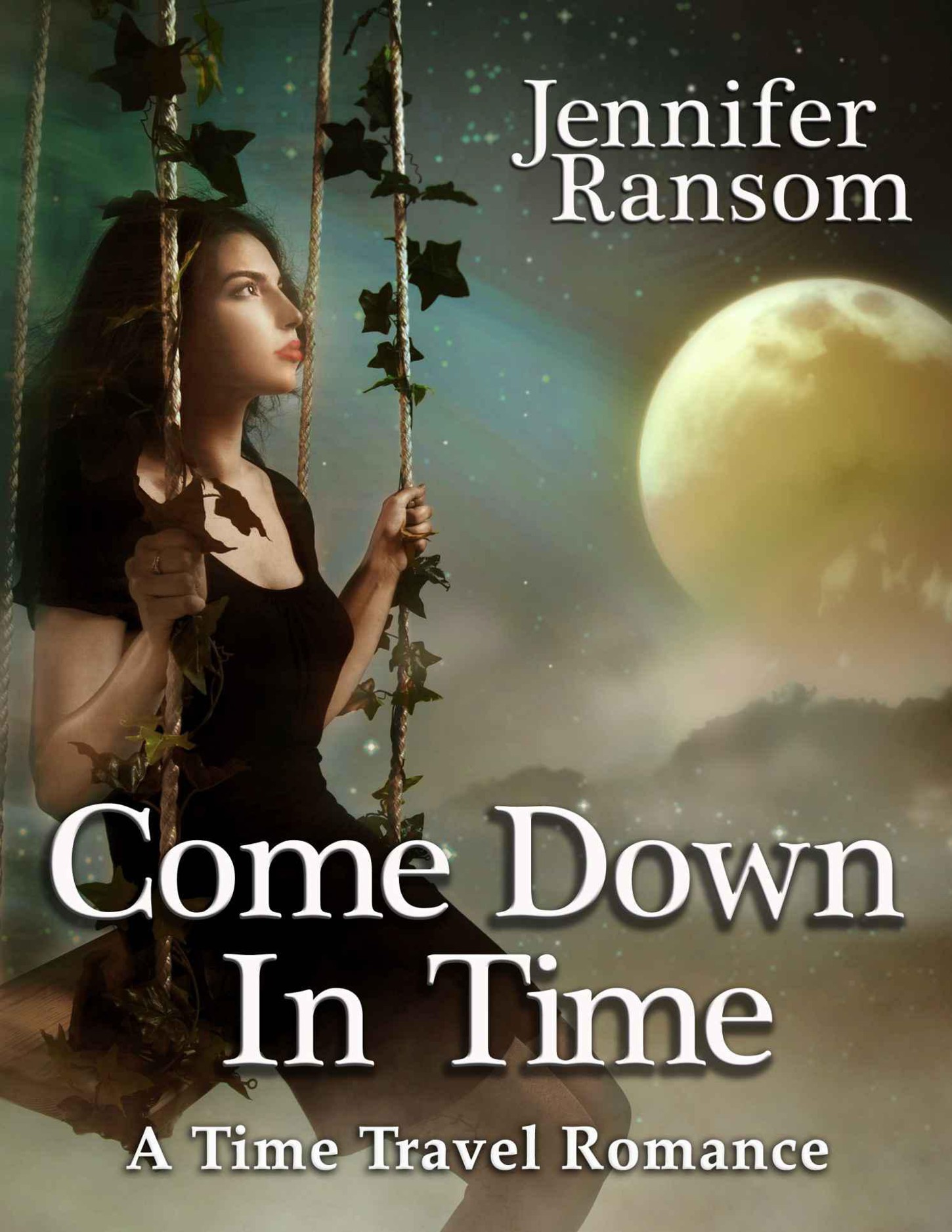 Come
Down in Time

To
further support this author, please take a moment to review this book
on Amazon.
Review
"Come Down in Time" Here.

This
is a work of fiction. References to actual people, places, and events
are used to lend authenticity to the novel and are used fictitiously.
All characters, dialog, and events are from the author's imagination
and are not real. Any resemblances to real people, places, events, or
dialog are coincidental.

This
book may not be copied, scanned, or reproduced in any way without
permission from the author.

To
my daughter, Jes, who taught me about timeless,

forever
love when I first looked into her newborn eyes.

I
know you're out there somewhere

I
know you're out there somewhere

Somewhere
you can hear my voice

I
know I'll find you somehow

I
know I'll find you somehow

And
somehow I'll return again to you.

Jamie sat at the kitchen table in
her cap and gown. Her cell phone was in her hand. She called Tommy
again. Where was he? Her parents and little brother had already left
for the graduation ceremony, and she sat waiting on Tommy. Damn him,
she thought. How could he be late on this day?

The ceremony would start in
twenty minutes and she was the valedictorian. She was supposed to be
there thirty minutes ahead of time. She had to get there! Five more
minutes passed, and then Jamie got up and drove her mother’s car to
the school.

The parking lot of Baker High
School was full and Jamie had to park under the oak trees that stood
in the back of the school. She hurried inside. Mr. Macky, the
principal saw her come in. “You’re late!” he said. “You’re
on in a few minutes.”

Jamie sat in the front row of the
auditorium with her classmates, listening to the graduation speaker.
She didn’t hear a word he said. She was stressed out because she
was so rushed, and she was angry at Tommy for not picking her up on
time. When Mr. Macky introduced her, she walked up to the stage,
carrying her speech in one hand. She forced herself to smile. A sea
of parents and brothers and sisters stared at her. Jamie read her
speech, looking out at the audience, looking back at her speech.

The longer Jamie sat there, the
madder she got. Mr. Macky moved through the alphabet and finally he
called, Jamie Walters. She accepted her diploma as the audience
clapped. There were only a couple of people behind her, and then
everyone threw their caps in the air. Jamie should have been happy
that she was a high school graduate, but she was mad.

She found her parents and Bobby
in the front hall of the school. “Have you seen Tommy?” she asked
them. “He never picked me up.”

“
No,” her mother said. “I
haven’t seen his parents either.”

That was the moment that Jamie
stopped being mad and started being worried.

“
I’ve been calling him,”
Jamie said. “But he never answered.”

A reception was set up at one end
of the lobby, and Jamie’s parents and Bobby started moving that
way, still carrying their programs in their hands. Jamie didn’t
budge.

She called Tommy again and left
another message. It wasn’t an angry message like the two she had
left before. It was a frantic message. “Tommy, where are you? I’m
worried about you. Please call me.”

Jamie looked around at all the
people in the lobby. She stood still as they moved around her,
sometimes bumping into her. And then she ran out the door and got in
her mother’s car. She drove to Tommy’s house.

She pulled up to the house.
Tommy’s father’s car was gone, but his mother’s green Toyota
was in its usual spot. Jamie and Tommy had spent the first year of
their relationship in that car, making love in the back seat more
times than she could count. Jamie got out of the car, still wearing
her graduation gown, and went up to the door. She knocked but no one
answered. She sat on the steps to wait. She would wait all night if
she had to. She called Tommy again. No answer again.

Jamie sat on the steps for two
hours before her mother called.

“
Where are you, honey?” her
mother asked.

“
I’m sitting at Tommy’s
house waiting for him to come home.”

She was ending the call from her
mother when she saw Tommy’s father’s car turning into the
driveway. Jamie stood up and started walking to the car.

Mr. Grisham got out first.

“
Where’s Tommy?” Jamie
asked. “I’ve been trying to find him all day. He missed
graduation.”

As Mrs. Grisham was getting out
of the passenger side of the car, the back doors opened and Tommy’s
little brother and sister got out.

“
Jamie,” Tommy’s father
said. “Tommy was in an accident. He didn’t make it.”

“
What do you mean?” Jamie
said, looking from Mr. Grisham to Mrs. Grisham’s faces. “What are
you talking about?”

“
No!” Jamie screamed. “No!
We’re getting married in two weeks. He is not gone!”

Mr. Grisham held Jamie against
his chest as she wailed. When she finally pulled away, she saw her
parents’ car pull into the drive. Her mother opened the door before
the car had come to a complete stop. She ran over to Jamie and took
her in her arms. Her father came up and encircled Jamie and her
mother. He led Jamie to the car. “Come on, hon,” he said.

“
We’ll come get the car
tomorrow,” her father said to Tommy’s father. Her father put her
in the back seat and her mother sat beside her, holding her hand.
Jamie cried all the way home. She cried every day and every night for
a long time after that day. She could still see Tommy’s face, his
brown hair, his friendly smile, for a long time. Years later, she
could still conjure Tommy’s face, if she let her mind go and let it
come to her. Tommy’s face. Her love.

At the end of her shift, Jamie
had dealt with three car accidents, two gunshot wounds, an asthmatic
child, a stroke, a child who had lost a finger when a door closed on
his hand, three heart attacks, and more respiratory illnesses than
she could count. It was a typical night in the E.R. of South Central
Hospital in Atlanta. When she got off at eleven p.m., she drove home
to her townhouse in the suburbs. She was exhausted, as usual. Her
refrigerator held no promises of a good hot meal. She made a sandwich
and drank a glass of wine before crawling into bed. She repeated that
day, over and over.

But one day she got a call. A
call she had been waiting for.

“
This is Dr. Nathan Abbott,”
he said. “You applied for a job at our clinic in Tennessee.”

“
Yes!” she said. She had
applied for a job there, in the Appalachian Mountains. She wanted to
do something different that didn’t involve a big-city emergency
department. She was fatigued with the stress of it.

“
I thought I’d do a phone
interview first,” Dr. Abbott said. “We get a lot of doctors
thinking they want to come to the mountains and live an idyllic life.
This is not an idyllic situation here.”

“
Research won’t tell you what
you’ll be facing here,” Dr. Abbott said. He was very up front. A
truth-teller. Jamie liked that.

“
Here’s the deal,” Dr.
Abbott said. “Dr. Shah’s three-year contract is over in a month.
He’s a good doctor, but people around here are distrustful of him
because he’s foreign. That’s just the way it is.”

“
I think I understand,” Jamie
said. In her career, she had known many foreign doctors, and she knew
them to be excellent. Sometimes there was a language and cultural
barrier with the patients. She couldn’t deny that. She imagined it
must be much more difficult in an isolated Appalachian town.

“
The government provides
housing for the doctors,” Dr. Abbott said. “And it’s all right.
I just want you to know that if you decide to come here, it’s not
going to be a fantasy. It’s hard work and a lot of personalities
and rural situations to deal with.”

“
Okay,” she said. She didn’t
know what else to say to that.

“
Don’t you need to interview
me in person?” Jamie said. She had never heard of getting a job
without a personal interview.

“
Nah,” Dr. Abbott said.
“You’ve got great credentials. I’ve seen your photo, and you
don’t look like a serial killer.”

Jamie laughed then. “No, I’m
not a serial killer,” she said.

Dr. Abbott laughed too. “Sorry,”
he said. “I know I’ve been blunt. I’ve just been through this
hiring process a lot of times and there’s no point in sugar-coating
the job.”

“
When would you want me to
start?” she asked.

“
As soon as you can get here,”
Dr. Abbott said. “How much notice do you need to give to the
hospital?”

“
I’ll give them thirty days.
I should be arriving around the time Dr. Shah is leaving.”

“
You saw the salary in the ad.
I’m assuming you’re okay with it. I can’t get you any more than
that.”

The salary was half of what Jamie
was making at the hospital. She had been careful and saved her money
over the years, so the salary at the clinic wasn’t a huge concern
to her. She needed to do something different, and if she hated it,
she could always go back to a big city.

“
I’ll send you the contract
and the information you’ll need,” he said. Almost as an
afterthought, he added, “Welcome to our clinic. We’re glad to
have you.”

Jamie went immediately to the
hospital administrator’s office. It was almost five and she didn’t
want to have to wait until the next day to give her notice. Dr.
Perkins was walking out the door when she got there. She told him she
was giving her notice of thirty days.

She shook his hand and he wished
her luck. Then she went back to the E.R. to complete her shift. She
did that for thirty more grueling days—heart attacks, strokes, the
flu, accidents. For a month, she worked and went to the townhouse to
sleep. She couldn’t remember having a good meal in all that time.
Thirty days later, she was on the road to Tennessee.

Taming the Star Runner by S. E. Hinton
The Demon's Brood by Desmond Seward
Bones of Faerie03 - Faerie After by Janni Lee Simner
Wise Children by Angela Carter
Stacy's Destiny by Dixie Lynn Dwyer
Alif the Unseen by Wilson, G. Willow
Bones of the Buried by David Roberts
Tempt Me (Tease Me Book 2) by Emily Goodwin
The Battle Lord Saga 02 - Her Battle Lord's Desire by Linda Mooney
Prelude to Terror by Helen Macinnes
Our partner