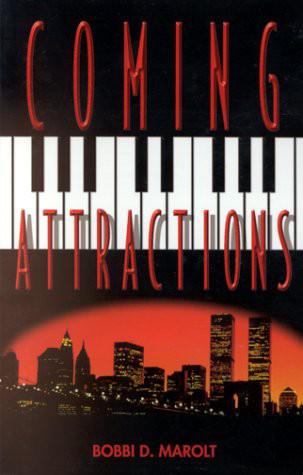 It’s been three years since Helen Townsend has made love to a woman, three years that she’s buried herself in work as a successful columnist for one of New York’s top newspapers. At last, she admits she’s tired of loneliness, of being closeted, and her column reflects her restlessness. Enter Princess Charming in the shapely form of gifted concert pianist Cory Chamberlain, and Helen embraces love once again. But when notables from Hollywood to Broadway give Helen their approval to perform in a star-studded, all lesbian and gay show, will Helen and Cory find happiness when one yearns to break out of the closet and breathe free, while the other fears that will destroy her career? 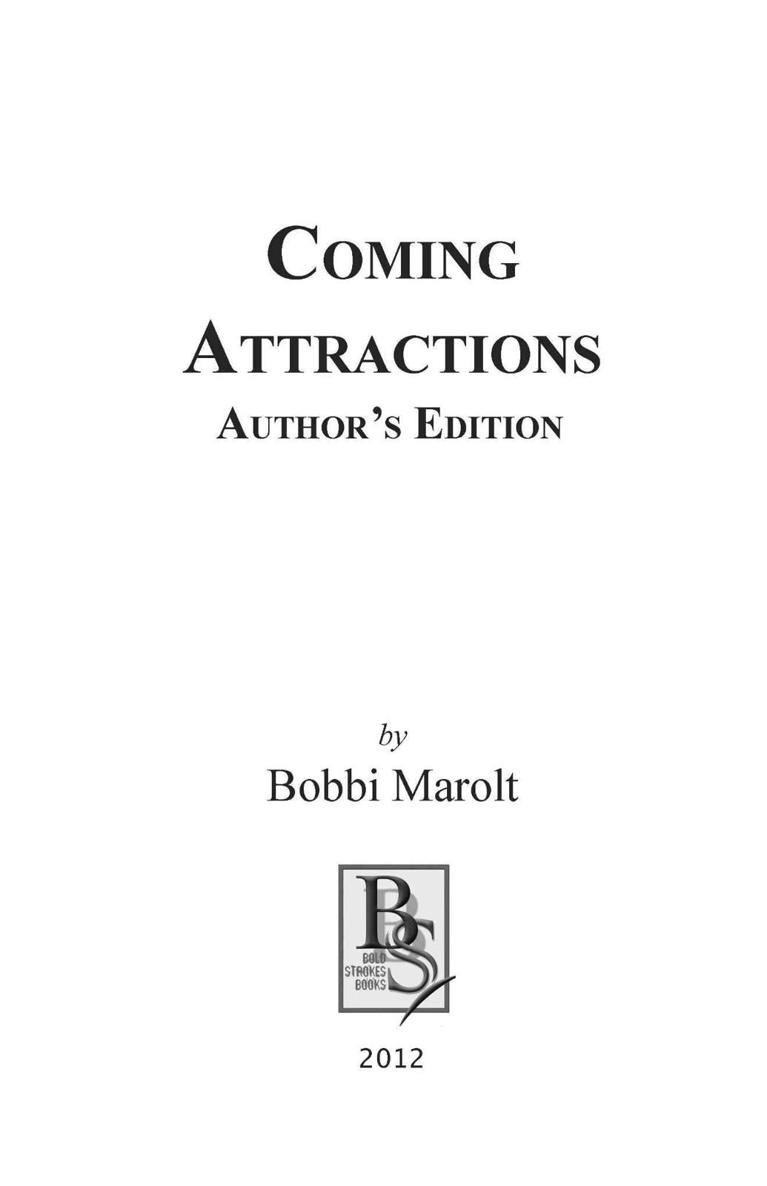 Lynn, who horsewhipped me into getting this work completed.

Melissa, who I know is grinning (knock it off) after my protestations of a rewrite.

Pam Sloss and Terri Baker for requesting a new release.

Sheri, for another perfect cover.

To the performing arts and artists that move me.

From the Author’s Messy Desk:

In 1997,
Coming Attractions
was first published. Through the years, and for many reasons, I’d look at the book and wish I had another crack at editing. A few (less than ten) words and phrases were inserted that I’d never have any characters say. I also found issues with grammar, punctuation, repetition, exclamation points, and various whatnot that made me cringe, and all were my fault. If I only had another chance…

My wish upon a star was granted. Radclyffe forwarded an e-mail from a reader who wanted to see the story reprinted by Bold Strokes. Did I want to do an author’s edition? Rad asked. Hell, yeah!

Be careful of your wishes.

From the first to the final page, the newer edition became a nightmare for me. There was rarely a sentence that my editor, Cindy Cresap, would have been happy with. To the aforementioned problems, add poorly placed modifiers, a sudden and brief POV change, dangling modifiers…the list goes on. I firmly believe if she read the original publication, she’d exhibit the proverbial run and scream into the night. She might have even slapped me, just because. I don’t know.

I ignored the work and tried to pretend that my contract with BSB didn’t exist. That was sure to catch up with me, and when it did, I had about five weeks to complete the project. Eventually, I was forced to buy another month from Cindy, because I hadn’t edited another word beyond Chapter Two (you may now take a breath). Granted the month, I worked the words into a more acceptable state (I didn’t edit the brief POV change) and sent a new draft—a week late.

Jump to edits. Not so bad after her critical eyes. Naturally, she snagged me on the different point of view that I’d left. Rewriting and relocating 4,000 words was tough, but I got through it. I must admit that the story reads better.

What readers will now find is a refined edition and one that I feel much better about presenting. There is a completely new chapter (taken from the original 90,000 words) that adds dimension to Helen. A second love scene has been extended, and many scenes have been improved upon. The story, of course, remains the same.

My working title of
Coming Attractions
was
Etude
(italics intended). It’s the title I still prefer.

The story still makes me tearful after all these years.

I must have a thing for the House of Tudor, as I’ve mentioned them in two novels.

The two Chopin pieces—“Polonaise No. 3 in A, Op. 40 No.1, Military,” and “Etude Op. 10, No.3 in E Tristesse”—are my favorites, preferably played by Vladimir Ashkenazy.

Newspaper columnist Helen Townsend leaned back into her leather chair, held the phone away from her ear, and studied the buildings outside her office window. Steel and concrete were more interesting than the chastising she received from another irate reader. Today, her column defended abortion rights.

Helen half listened to the woman’s song and dance, which included God, murder, and souls damned forever. Seemingly, the speech was Helen’s private Muzak, cleverly disguised as the phone company. Enough was enough.

While the woman squawked, Helen cradled the handset on her lap. She rolled her shoulders and then straightened the clutter of notes, pencils, and stray floppy disks on her desk. Her computer clock read five twenty, and she turned off the monitor. For the night, she was officially off the company payroll, and it was time to go home. She looked at the phone receiver briefly, put it closer to her face, and then politely blew her caller out of the water.

“I understand your position,” she said and kicked off her high heels. “If you’re so dead set against abortion, then don’t have one. It’s my opinion that others deserve a choice.” She reached under her desk and pulled on her sneakers.

A loud crash on the other end of the line signaled the conversation had ended. Helen shook her head and replaced the receiver. She would have appreciated one positive response. Where were her advocates? Amid the entirely negative reactions, a simple, “Hey, Helen, good column,” would have been sufficient. She struggled with putting her jacket on and then flipped her hair from under the collar. “Hell, then I wouldn’t have anything to bitch about.”

Hers was just another day at the office and Helen liked her profession. No, she loved having the good, the bad, and the ugly of New York at her fingertips and then writing about them. She would never please everyone, but the job was fun and Sam, her editor, trusted her judgment.

Outside the building, the weather was unseasonable and she closed her eyes to a sudden burst of chilled air. She shivered and turned her collar up. That wind was much too cold for the beginning of October. With winter not far behind, she knew time neared for steady workouts.

“Women don’t sweat, they glisten.” She laughed to herself.

“Helen Townsend?” a woman called from behind her.

Helen cringed, expecting another save-the-world-before-we-all-go-to-hell-mother-of-five-who-will-not-tolerate-abortions-or-any-person-connected-with-them. She spun around and shot a defensive look toward the woman.

“Yes, I’m Helen, but if you want to blast me about today’s column, feel free to call my office tomorrow. Right now, all I’m interested in is a hot bath and a cheeseburger.”

The woman stepped back, studied Helen’s face, and gave a slight laugh. “Judging from your defensiveness, I assume you’ve had quite a column today.” She glanced over Helen’s shoulder. “I wanted to say that I took particular interest in your black sheep column a few weeks ago.”

When she looked back at Helen, the intruder’s eyes quickly drew Helen into them. Embarrassed, Helen stammered, “I have to apologize. I’ve been damned to hell so much today that—”

She was close in age to Helen, but stood a good four inches shorter than Helen’s five feet six inches. Straight, dark brown hair cascaded past her shoulders, and Helen wondered where it ended. A wisp of bangs hung over her forehead; her eyebrows lay erratic, and Helen was enticed to reach over to smooth them, but she didn’t. She actually liked the look. The woman smiled easily with her naturally pink mouth.

Thick, dark lashes and brilliant emeralds of near-perfect clarity gripped Helen. It was a deliberate possession and she wanted to run but felt an impulse, a distinct need, to pull the woman tightly to her and seal her mouth around her soft lips. Flustered with immediate want, she was certain her blush gave her away.

“Be careful,” the woman said with obvious amusement. “Between your look and your black sheep column, you’re revealing a great deal about yourself. Good-bye, Ms. Townsend, and I hope you have an enjoyable evening.” She turned and walked away.

A weakening rush overcame Helen when she noticed the woman’s hair fell nearly to the middle of her back. Come back! Stop! Wait! Her mind raced. Careful. Black sheep. Revealing. She needed to have the statement deciphered. Helen quickly wove her way through pedestrians and the smell of street vendors’ hot dogs, until she reached the woman.

“What did you mean by that?” Helen reached out, carefully grabbed the woman’s arm, and kept pace with her.