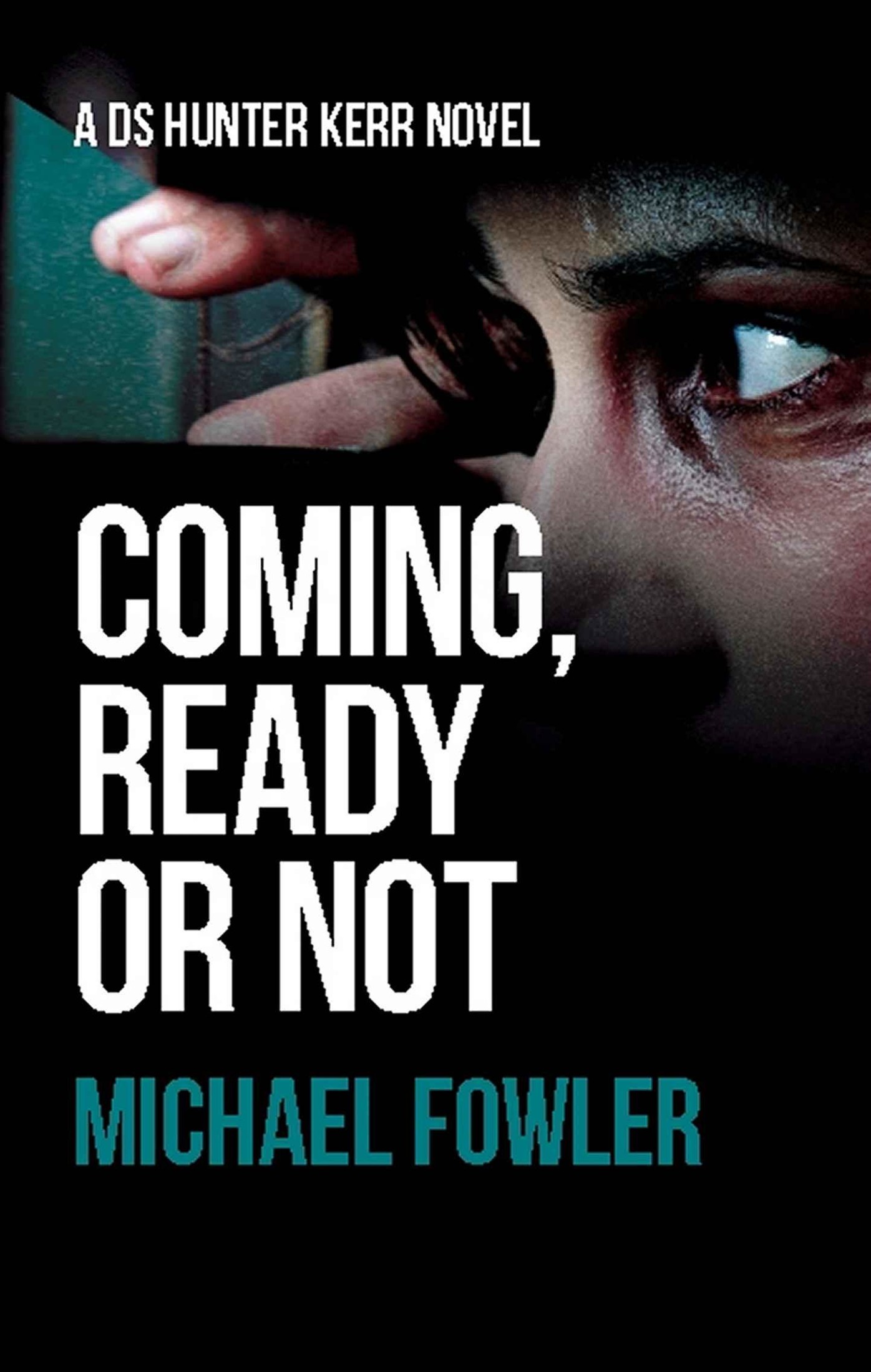 COMING, READY OR NOT

The
fourth novel in the

Fiction aimed at the heart

Michael Fowler has asserted his right under the Copyright, Designs and Patents Act 1998 to be identified as the author of this work.

All rights reserved. No part of this publication may be reproduced, stored in a retrieval system, or transmitted in any form or by any means, electronic, mechanical, photocopying, scanning, recording or otherwise, without the prior permission of the publisher.

This book has been sold subject to the condition that it shall not, by way of trade or otherwise, be lent, resold, hired out, or otherwise circulated without the publisher’s prior consent in any form of binding or cover other than that in which it is published and without a similar condition including this condition being imposed on the subsequent purchaser.

COMING, READY OR NOT

Michael lives in the Dearne Valley area of South Yorkshire with his wife and two sons.

He served as a police officer for thirty-two years, both in uniform and in plain clothes, working in CID, Vice Squad and Drug Squad, and retired as an Inspector in charge of a busy CID Department in 2006.

Coming, Ready or Not
is the fourth novel in the DS Hunter Kerr series.

Aside from writing, his other passion is painting, and as a professional artist he has numerous artistic accolades to his name. His work can be found in numerous galleries throughout the UK.

He is a member of the Crime Writers’ Association.

He can be contacted via his website at www.mjfowler.co.uk

HEART OF THE DEMON

SECRETS OF THE DEAD

The noise jolted her awake. Startled, Helen Moore snapped open her eyes but she couldn’t see a thing. A thick tar wall of darkness faced her. For a moment, the intensity of the blackness threw her and she scrambled together her thoughts. Then she remembered. She was surprised as to how dark it was inside their tent.

Beside her James
jumped. ‘What?’

Helen
wrenched her eyes wider, trying to pierce the gloom. But it was pointless. It was pitch black dark and so she strained to listen, holding her breath.

S
he whispered, ‘That noise?’

In the distance a
percussive crash of thunder fractured the silence. Helen’s heart leapt.

‘
It’s only thunder,’ her husband said.

Somehow, she was pretty damn sure
that the noise, which had disturbed her only a few seconds ago, hadn’t been thunder, but it was now trapped in the depths of her sub-conscious and she couldn’t drag it back. Through gritted teeth she sharply replied, ‘That’s thunder now, but I heard something else. I think I heard someone moving around outside.’

She
made an attempt at sitting up but her sleeping bag was wrapped so tightly around her that she slumped sideways. She shouldered the ground tarpaulin heavily and let out a moan. As she fought to prop herself up a second clap of thunder peeled in the distance.

After a couple of seconds of awkward shuffling she manoeuvred herself into a sitting position, anchoring her
self by drawing up her knees. Holding her breath she listened.

Suddenly feeling foolish, Helen shook her head. It must have been the storm, she told herself, and her half-asleep mind had been playing tricks with her thoughts.

A
nd then the noise struck up again – a rustling sound close by.

Goosebumps
prickled her flesh. She stiffened. It sounded as if something or someone was dragging their way through the grass.

This time she honed in on a
soft shuffling sound. It sounded as if someone was padding around only a few yards from the tent’s entrance.

With
a hushed moan James said, ‘I’ll take a look. I’m telling you it’ll just be a fox, or even a badger, something like that.’

She heard a zip unfasten and although she still couldn
’t pick anything out in the darkness she could visualise her husband pulling himself out of his sleeping bag.

James brushed past her and the
n she heard him zipper apart the entranceway. A silvery thread of moonlight washed in through the opening, and she caught his silhouette, on all fours, edging outside.

As the tent f
olds closed behind him, once again her vision was overcome by blackness and she turned an ear to the entrance. At that moment, despite being encased in her sleeping bag, she felt exposed. She leaned forwards, wrapped her hands around her legs and pulled her knees tightly towards her chest.

For a few seconds the only sounds she could hear w
ere the swish of grass and James’s soft curses. She had a vision of her husband scrambling animal-like amongst the damp undergrowth.

A sudden c
ry of ‘Oi’ made her jump. Helen tightened her grip on her knees. Scuffling broke out. Then, a desperate scream of ‘No’ pierced the night air.

An
overwhelming sense of fear and dread enveloped her as she desperately fought to make sense of what was happening outside. A split second later she felt the ground reverberate – as if someone had fallen with a heavy bump nearby.

Helen
’s chest tightened. Her heart contracted and a sharp pain made her flinch. Then, her stomach turned making her feel sick and faint. She gasped and froze. She took a hold of herself. Instinct was telling her something was wrong. Dead wrong! Especially that something bad had happened to James and yet she still whimpered his name.

For a few seconds there was complete silence
. She pulled her legs even tighter. Braced herself so tight that pins and needles sparked through her lower limbs.

S
oft spoken words broke the peace. It sounded like someone was whispering numbers. Counting down.

T
hen a high-pitched tone hissed. ‘Coming, ready or not!’

In
the Frog & Parrot, on Division Street, Leonna Lewis’s ‘Bleeding Love’ boomed from a large set of speakers, piled high upon the staging area, reverberating into the room, tormenting Gemma Cooke’s hearing. Tormenting her, because picking her way through the song, some of the lyrics were so adversely poignant, given what she had recently gone through, and in another time and another place she might have shed a tear. But, not right now. Tonight she was going to celebrate with her friends. Added to that, the large amount of vodka and coke she had drunk over the last few hours had numbed any feelings of sorrow.

S
he felt her mobile vibrate in her pocket; the noise had stifled its ringtone. She moved to retrieve it. For a few seconds she fumbled around, struggling to pull it out – the combination of the tightness of her jeans and her slouched position in her seat making it difficult. Finally she tugged it free. Flipping it open she saw that she had one new message, though it wasn’t from anyone on her contact list. In fact, she didn’t recognise the number. She pressed the OK button and the text flashed onto her screen. It took her only a few seconds to read the three lines of text but in that short space of time the drunken happiness she had been experiencing abandoned her, as her stomach turned-turtle and the bile rose in her throat.

A
n anxious voice opposite broke her free from her trance-like state.

‘
Gemma, what’s the matter? You look like you’ve seen a ghost.’

Across the table, over a sea of alcoholic drinks
, Gemma sought out her best friend Lauren. Catching her concerned look, in a loud, vitriolic tone, she snapped, ‘Look what that bastard’s just sent.’

She
picked out a space amongst all the glasses and bottles, and set down her phone in the centre of the table, enabling all her friends who were hunched around to catch a glimpse. Depressing the OK button again she activated the back-lit screen.

‘
Im gonna slit ur throte an burn ur fuckin hous down bitch.’

Planted with Hope by Tricia Goyer
The New Neighbours by Costeloe Diney
The Fundamentals of Play by Caitlin Macy
TW12 The Six-Gun Solution NEW by Simon Hawke
The Wrong Path_Smashwords by du Paris, Vivian Marie Aubin
The Crossroads by Niccoló Ammaniti
Breeders by Arno Joubert
Race by Mobashar Qureshi
Moving Forward by Davis, Lisa Marie
A Lion Among Men by Maguire, Gregory
Our partner