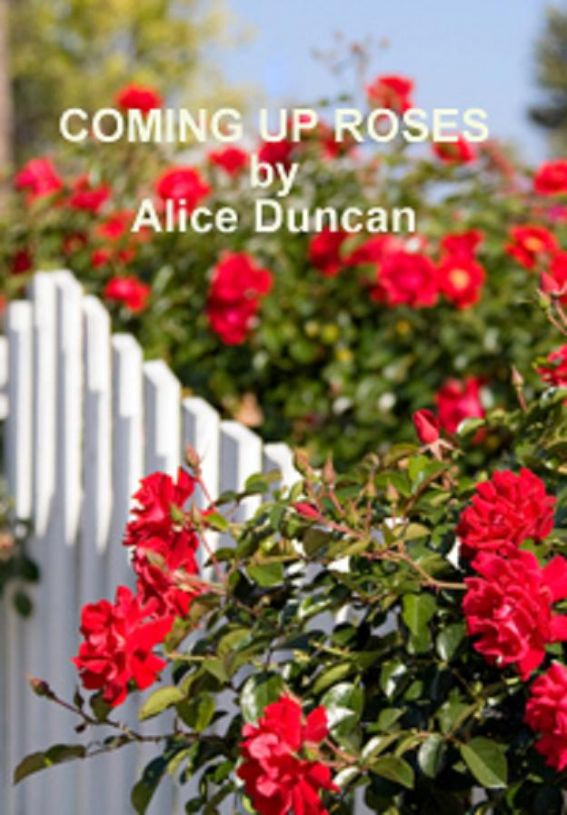 COMING UP ROSES
By Alice Duncan

This ebook is licensed for your personal enjoyment
only. This ebook may not be re-sold or given away to other people.
If you would like to share this book with another person, please
purchase an additional copy for each person you share it with. If
you’re reading this book and did not purchase it, or it was not
purchased for your use only, then you should return to
Smashwords.com and purchase your own copy. Thank you for respecting
the hard work of this author.

William F., “Buffalo Bill”, Cody stared at
Rose Ellen Gilhooley as if he’d never seen anything even remotely
as wonderful as she in his life. Rose hoped she wasn’t
misinterpreting his interest because she really needed him to like
her.

“
Whoo-eee!” the
former-scout-become-entertainer hollered when Rose performed one of
the more lethal tricks her Sioux pal, Little Elk, had taught her
several years earlier. Cody even waved his hat in his excitement.
“Little gal, you are really something!”

After she’d successfully maneuvered her body
underneath her horse’s belly and had emerged safely on the other
side—without benefit of a saddle or reins—Rose steadied herself,
sucked in a deep breath, said a silent prayer, and leaped, landing
with her bare feet on Gingerbread’s back. She balanced perfectly
without, she hoped, looking as if she’d had to struggle to do so,
and threw her arms up in the air in a gesture of triumph. Her
brother Freddie had told her she looked like an angel ascending
when she did that. Freddie used a lot of high-flown language, since
he read a lot. Rose’s education wasn’t as grand as Freddie’s, and
all she really hoped for today was that she looked like somebody
Buffalo Bill Cody could use in the Wild West.

She knew her mother was nervous. Rose could
see her from the corner of her eye: gaunt, thin, weathered, looking
much older than her forty-three years, thanks to poverty and
grinding hardship. But Rose’s mother, for all the discomforts of
her life, loved her children beyond anything. Rose’s one wish, the
reason she was performing her heart out for Cody today, was that
she could earn some money by doing so, thereby helping her family
and easing the burdens of her mother’s life.

Sliding down until she rode the big bay
gelding astride, Rose kneed him, giving the signal to end the show
with a flourish. Obeying her command, Gingerbread raced twice
around the meadow and then stopped abruptly in front of Cody,
rearing and pawing the air, as Rose had seen wild stallions do on
the plains.

Buffalo Bill applauded extravagantly when
Gingerbread took a classy bow, as Rose had also taught him to do.
She executed a grand bow from horseback herself, sweeping her
battered hat from her head. Of course, if she got the job, she’d no
longer have to use battered hats.

“
By golly, gal, you are really
something! I thought your brother was exaggerating when he begged
me to come out here and see you, but he wasn’t. By God, he
wasn’t!”

He probably was, actually. Freddie was always
praising her to the skies. This time, his zealotry might have paid
off. Rose slid from Gingerbread’s back and clicked for the horse to
follow her up to Cody, who stood at the door of the three-room sod
hut in which the Gilhooley family had lived since they moved to the
territory. The move had taken place years before Rose’s birth.

Because she’d learned early that a poor
person had to use the gifts God gave her and not to be behindhand
in expressing her needs, Rose didn’t shy away from asking the
famous man the question that was uppermost in her mind. “Do you
think you can use me in the Wild West, Mr. Cody?”

She’d given him a dazzling exhibition of her
shooting skills, too, but she knew he already had a couple of
female sharpshooters. The most famous of them, Annie Oakley, was,
according to Freddie, better even than Rose at shooting. Therefore,
Rose had spent most of today’s presentation on riding, at which
even she acknowledged her superiority.

Nobody could beat Rose when it came to trick
riding. Not even Little Elk any longer. Little Elk had told her so
himself.

Her heart thrilled at his words. She’d all
but worshiped this man for years. “Thank you so much, Mr.
Cody.”

Cody stuck out a big hand for Rose to take.
She wasn’t used to shaking hands with men, but she didn’t shrink
from that, either. She took Cody’s hand, which was so large it
swallowed hers, and shook it heartily.

“
Call me Colonel, little gal. Everybody
does.”

“
Colonel Cody.” Rose would call him
anything he asked, as long as he’d hire her.

“
Sergeant Gilhooley told me that
you—”

Buffalo Bill laughed. Rose wished she hadn’t
interrupted him, but she wanted to know who Sergeant Gilhooley was.
Nobody in her family had joined the army that she knew about.

“
Your brother Frederick, little gal. I
like to assign ranks to my friends, don’t you know.”

He winked at her. “In that case, when can you
pack? I’ve got to be in New York City next week, and we have to get
the show together. We’re on our way to Europe.”

Europe! Good Lord. Rose shot a startled
glance at her mother, whose face held a poignant combination of
elation and sadness. Rose knew her ma would hate to see her go, no
matter how much she’d be able to use the money Rose would be
sending home. She stammered, “N-next week? New York?
Europe
?”

The world-famous buffalo hunter and scout
nodded, still grinning up a storm. “You and I’ll have to catch the
train from Deadwood tomorrow.” Cody gave her a sympathetic smile.
“I know it’s quick, and it’ll be a big change for you.” He turned
to Mrs. Gilhooley. “And for you, ma’am. I know you’ll miss your
daughter something awful, but she’s the best little rider I’ve ever
seen. And I’ve seen plenty, believe me. We can use her.” He allowed
his glance to slide over the pathetic Gilhooley family farm. “And I
suspect you can, too.”

“
Yes,” Mrs. Gilhooley said softly. It
was the first word she’d spoken since before Rose had started
demonstrating her riding skills.

“
Tomorrow.” Rose swallowed hard. Then
she straightened and grinned at the man who looked as if he was
going to be the salvation of her family. “Tomorrow it is, Colonel.”
She snapped a smart salute, and Cody chuckled again.

She left with him on the train from Deadwood
at noon the next day. There was no parting fanfare except from her
family and the few of their friends and neighbors who’d heard the
news in time to witness the departure of her train. Cody had made
arrangements for Gingerbread to travel with them. Rose tried hard
not to cry as she waved good-bye to her mother, brother, and
sisters. Her mother didn’t even make an effort not to cry.

Thus it was that Rose Ellen Gilhooley began
her career with Buffalo Bill’s Wild West. She was sixteen years
old.

H.L.—which stood for Horatio Lambert,
although no one who knew him ever called him anything but H.L.—May
strolled through the entrance of the Columbian Exposition and on to
the White City. He and his friend Sam Trimble ambled along, eyeing
it all with pure fascination. As they did so, H.L. mentally started
composing the first of the several articles he aimed to write about
the 1893 Chicago World’s Fair.

This place was great! Although he seldom
allowed himself to feel enthusiasm for anything because he had an
image of the world-weary, jaded journalist to uphold, he was, in
secret, totally, unconditionally, and absolutely fascinated by this
Exposition.

“
We’ve got to take in Buffalo Bill’s
Wild West, too, don’t forget,” his buddy said. Sam, too, was a
reporter for the
Chicago
Globe
, although

Sam didn’t cherish his journalistic image as
much as H.L., probably because he hadn’t had as much to overcome as
had H.L. Starting with his atrocious name.

Why any loving mother and father could saddle
an innocent baby with a name like Horatio Lambert was beyond him.
Hell, it wasn’t as if they’d had any rich uncles or grandfathers to
appease. The Mays had always been as poor as church mice. H.L. had
grown up on the banks of the Mississippi River in a small town in
Missouri. “Like Tom Sawyer,” H.L. often told folks with a wink.

It had been a good boyhood, he often thought.
And if H.L. had engaged in fisticuffs a good deal more than Tom
Sawyer ever had, it was only because his folks had erred when
they’d named him. He’d learned to defend himself early from bigger
boys who teased him for having such a prissy name. By the time H.L.
was twelve, he’d grown tall and brawny, and was able to flatten
anyone who made the mistake of calling him Horatio Alger—the last
kid who advised him to “go west, young man,” had lost two teeth—or
Horatio at the Bridge, or any one of a number of other titles they
considered funny.

H.L. didn’t even want to think about
the joy his middle name had brought him.
Lambert
. Good God. If H.L. ever, heaven forbid,
got married and sired a son, he was going to name him something
decent. Something manly. Something the poor boy wouldn’t have to
defend with his fists.

“
People can be asses sometimes,” Sam
commented with a laugh. “I want to see Annie Oakley. I understand
she’s some kind of phenomenon.”

H.L. nodded. “Me, too. And that other woman,
too. The horseback rider. What’s her name? Rose Gilhooley? I hear
she can ride like an Indian.”

“
Anyhow, I read somewhere that it was a
Sioux Indian who gave her the name she uses in her act, ‘Wind
Dancer.’“

H.L. nodded. “I read the same thing, although
it was on one of Cody’s publicity dodgers. Who knows if those
things tell the truth or not?”

H.L. only laughed. He cherished his
reputation as a cynical big-city reporter. God knows, he’d worked
hard to get it. He flexed his hand in memory of his bruised
knuckles.

The two men, who’d not only received
dispensation from their editor to visit the Exposition any time
they felt like it during the fair’s first month but, thanks to
H.L.’s silver tongue, had even talked the newspaper into paying
their fifty-cent entry fee as well, felt as free as birds. H.L. was
used to feeling free, but he knew Sam wasn’t. Sam was married and
had two children. H.L. shuddered at the notion of being tied to so
enormous a responsibility as a wife and family.

H.L.’s entire life had been spent getting
free from things, starting with his lousy name. After he’d wrestled
his name into submission, he’d plowed through poverty and ignorance
until he’d earned a scholarship to Missouri University, graduated
with honors, moved to Chicago, and proceeded to bully and write his
way into a job as an ace reporter. He’d worked like a demon, fought
like John L. Sullivan, and had made it. All on his own. It would
take somebody mighty special to get H.L. May to put on shackles
voluntarily. H.L. didn’t think there was a woman alive who could do
it.