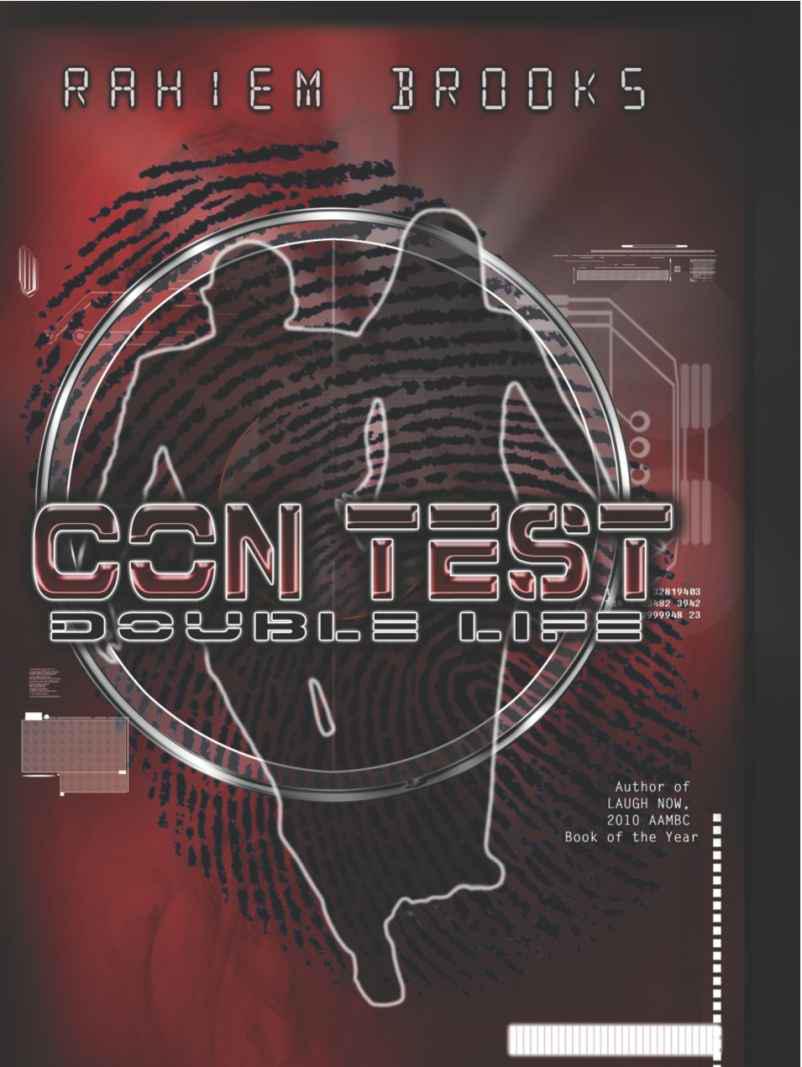 The characters and events in this book are fictitious. Any similarity to real persons, living or dead is coincidental and not intended by the author.

All rights reserved. Published in the United States by Prodigy Publishing Group
www.prodigypublishinggroup.com

FOR MAMA BEVERLY AND GRANDMOM MARY

There are no words, even from an author, to describe a grandmother!

T
he Wachovia Bank teller had no idea that she would be robbed that day. Had she known, perhaps she would not have reported for duty. She would not experience an ordinary robbery, though. Not one involving drawn guns or threatening notes. Her life would not be in jeopardy. Nor would she witness a sophisticated scheme to drill through the bank’s vault. This robbery would be deceitful and conniving, but as devastating in its effect as any armed caper.

Wachovia Bank customer Lavern Grisby had parked in the bank’s parking lot. The shadows from the pine trees neatly lined across the back of the lot forced the warm autumn air to seem chilly. Lavern checked her garish makeup in the rearview mirror before she opened the car door. She quivered as an eerie chill came over her. Then she walked slowly and apprehensively from the handicapped parking space. She was a jazzy black woman, clad in daywear and donning a cane.

She reached the bank door. Before she reached out to open it, the door swung open. A security guard held the door open until she crossed the threshold. That was why she adored Wachovia, they provided extraordinary customer relations from the moment customers were on the property. She flashed him a prismatic smile and showcased teeth that were so perfectly capped that they were enviable. She thanked him and gleefully waltzed across the dark green carpet.

Lavern peered over her shoulder from time to time expecting a black, derelict thug brandishing a gun, or worse, a white man with a bomb foolishly wrapped snuggly about his throat to rush into the bank behind her, she fell in line behind three other customers. She prayed the bad men were on hiatus that morning.

Lavern stood in the roped line and used her cane as an additional leg. She rested her hand on the chrome post; it was cool. She was hot, though. She pulled a church fan from her Chanel handbag and began to fan herself. The air hit her nostrils and she smelled the potpourri which sat in bowls all around the bank. She hoped that her allergies did not act up. If so, she would sweat and have a sneezing attack. Either would ruin her makeup, and ultimately, her day.

She turned her head to look around the bank and her large gray curls swung wildly. Along the wall behind her were three customer service representatives chatting with customers. To the left of them was the vault, complete with an armed sentry. Lavern glanced at her watch and then was instructed by a white flashing arrow to proceed to the available teller.

In front of the teller, she removed extra-large Fendi glasses and slipped them into her bag. She used a gloved hand and a fancy pen to sign a withdrawal slip.

“
How may I help you today?” the teller asked smiling.

“
A withdrawal, sweetie,” Lavern said, and stacked above that she said, “Here’s a withdrawal slip from the back of my checkbook. I have signed the slip, but with my arthritis,”—she held up a mildly shaking writing hand—“Could you? Would you mind filling out the remainder of the slip?” she pleaded in her raspy, deep, Southern drawl.

The teller looked at the elderly woman and said, “Of course not, ma’am. I have your account number here on the bottom of the slip. All I need is the amount you’d like to withdraw and see photo identification along with a second form of ID.”

“
Oh, certainly,” Lavern said, pulling out her wallet to retrieve her ID. “I need a cashier’s check for … Shoot,” Lavern said, frustratingly, as she passed the teller her ID. She took a deep breath and then coughed into a cupped hand over her mouth. “Pardon me,” she said, apologetically.

“
No … no. I’ll be fine. Thanks, though,” Lavern said, having gathered her composure. “Math has never been my strongest subject. Could you tally two months’ rent and two months’ security, if the rent is $1,400 per month? I’ll need a check for that amount. Also, $3,000 in cash. Can you add that accordingly for me, please?”

“
A $5,600 cashier’s check and $3,000 in cash will be a total withdrawal of $8,600,” the teller said, filling out the withdrawal slip as she spoke. She then handed the slip to Lavern. “Verify the amount for me, Ms. Grisby and place your right thumbprint on the slip, as well. Thanks.”

Lavern scanned the slip and handed it back to the teller without the thumbprint. “Hon, these protective arthritis gloves are a pain to get off, and worse to squeeze on. My hands swell, and…”

The teller cut her off, politely. “But…”

Ms. Grisby returned the favor. “I have not been here in a while, but the head teller over there,” she pointed to a white woman who scanned a spreadsheet, “could verify who I am,” she said. “She used to help me when I would come in daily to make business deposits.”

“
You mean Rose Randall. She’s the head teller. Let me get her,” the teller said, stepping away from her station. She showed Rose the withdrawal slip and two pieces of identification and informed her of the situation.

Both women walked back over to Lavern.

“
I’m fine. This arthritis acts a fool, but otherwise, I’m sixty-six years young. And you?”

“
Peachy! It’s been some time since you last visited us, huh? How’s the business heading up?” Rose asked, throwing Lavern a smile.

“
Business is fine. The children are running it since I’ve retired,” Lavern said. She switched gears to get the topic off her. “You’ve moved up, I see. Congrats!”

“
Thanks … Ms. Grisby, I do not mean to cut this short, but I have a budget due in half an hour. Just jot your birth date and Social Security number down on the withdrawal slip and I will approve your transaction. Thanks.”

Lavern gave the back of her fan a quick glance for her personal data. She knew the information, but liked to be careful. She complied with Rose’s request and watched the bankers verify the information on the computer monitor. Rose initialed the slip, offered Lavern a good day, and sent the teller to fabricate the teller’s check.

Lavern watched the teller as her pulse began to march double time. A hot ball of acid, scorching and burning, elevated from her stomach to her chest. She suddenly felt that she was trapped in a vat of hot air. She fanned herself before she had a panic attack. She kept her ears alert, head held high. Lavern was not prepared for another dangerous bank episode.

Four minutes passed and the teller came back with the check. She punched buttons on her computer keyboard, and then counted $3,000 from her drawer. She placed the notes into an envelope, and then handed it to her customer. Lavern counted the bills and then tucked the envelope into her bosom.

“
Just a receipt with the balance, and I’ll be outta your hair.”

Lavern spoke into the phone: “Before you ask, yes, I found your phone in my car. I had planned on dropping it to you with the check for your rent deposit and money for college. That was before I heard this ringtone … Sorry, nothing … Do you know how embarrassing this is? I’m still in the bank, boy … I don’t want to hear … Is that what you play to those young gals you’re having sex with, ’cause I have seen it, and it ain’t worth waiting to see … Sure it grew, tell me anything!” Ms. Grisby slammed the phone shut and turned her attention back to the teller.

“
That’s right. You tell him, Grandma,” the teller joked. She handed Lavern the receipt and asked, “Will that be all?”

“
Yes, and have a nice day,” Lavern said, and then left the bank.

Lavern reached her car, tossed her cane into the backseat, and sat slowly in the driver’s seat. She started the ignition and backed out of the parking space. She eased her Prada Mary Jane’s down on the accelerator and blended with the two-lane Cheltenham Avenue traffic. Her heart pounded. She adjusted the ventilation to a cool sixty-five degrees. She needed to cool and calm down. She had survived. She glanced into her mirror slightly disoriented as she drove away from the bank into a morning so brilliant and indigo and full of hope for the future.

With all intent on getting away from the bank, she drove hastily west on the avenue like a bat out of hell; certainly not like an elderly woman. She turned southbound onto Broad Street, and shortly thereafter, she flipped a left onto a small street. Her only purpose for that turn was to ditch the stolen vehicle that she had been driving. She put the car in park and turned her fake grandson’s cell phone back on. She dialed a friend who answered on the second ring.

“
This is JL. I have something for you,” Justice Lorenzo said in his authentic, late-night, radio-type voice.

“
Yeah!” Flocco responded, excitedly. He knew that Justice was good for good vehicles.

“
I’m stepping out of a Nissan Maxima with 683 miles, straight from Enterprise,” Justice confessed, stepping femininely out of the Maxima, remaining in character. He hopped into a navy Cadillac Escalade.

“
Homey,” Justice said, disgustedly, “a brand-new wheel. Don’t try to play me, man. I need ten, or I go to the New Yorkers.” There were no New Yorkers, but Flocco did not know that though.

Justice drove back out onto Broad Street, then continued west on the county dividing Cheltenham Avenue. On the right side of the avenue—the side that he meandered along—was Montgomery County. The world was deepening into the new century. Just when he had lost faith in the idea of fulfilling the American dream and mentally extinguishing his aspirations, he found the courage to rise from among the dead. His bottomless well of ideas burned brightly, and on that beautiful autumn morning he promised to attain the ultimate goal of all—becoming a celebrity.