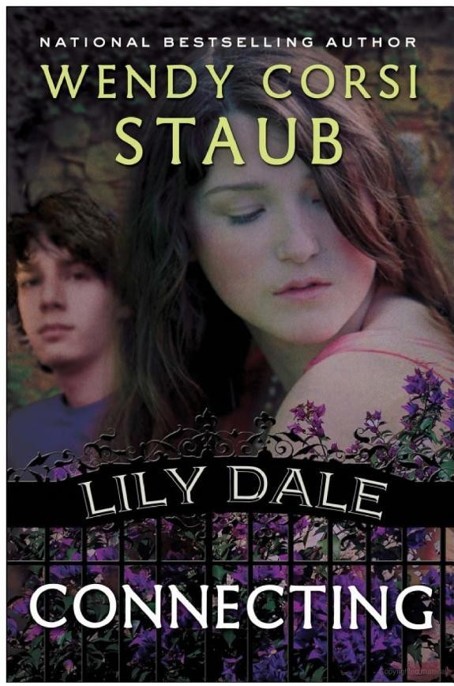 Dedicated in loving memory of my friend Stephanie Murphy
and to her husband, Tim, and their children, Ryan, Caitlyn,
and Maureen, in whom her joyful legacy will live on

And to Brody, Morgan, and Mark

The author is grateful to agents Laura Blake Peterson and Holly Frederick, as well as to Tracy Marchini, all at Curtis Brown, Ltd.; to Nancy Berland, Elizabeth Middaugh, and staff at Nancy Berland Public Relations; to Peter Meluso and Ed Dintrone at Aquaint Interactive; to Morgan Doremus and Miss Media Productions; to Rick and Patty Donovan and Phil Pelleter at the Book Nook in Dunkirk, New York; to Emily Easton, Deb Shapiro, Beth Eller, Mary Kate Castellani, and everyone at Walker & Company; to Susan Glasier of the Lily Dale Assembly offices; to Dr. Lauren Thibodeau, PhD, author, and Registered Medium; to the Reverend Donna Riegel and members of her beginning mediumship class in Lily Dale; to Mark and Morgan Staub for their literary expertise and creative feedback; and most importantly, to Brody Staub, who came up with the title.

“So, wait, let me get this straight—you’ve been dreaming about your mother, and now you’re convinced she was murdered? Is this what you’re trying to tell me?” On the other end of the phone line, Lisa Wilson’s heavy southern accent is laced with disbelief.

“Not exactly.” Calla Delaney paces across the creaky floorboards of her grandmother’s northern living room, stepping around the sleeping pile of gray fur that is Gert, her new pet kitten. “I’ve been dreaming that I
am
my mother, and now I’m convinced she was murdered.”

Hearing a rumble of thunder in the distance, Calla notices that the room has grown dim. Another autumn storm, rolling in from the west.

Fine with her. The gloomy weather suits her mood.

“I know it sounds crazy,” she tells Lisa, “but in my dreams the past few nights, I’ve been reliving my mother’s last moments—getting dressed for work, taking this manila envelope out from under the mattress, walking down the hall with it . . . then someone sneaks up and pushes me—her— down the—”

A hard lump of grief clogging her throat, Calla can’t go on. She tries not to picture it all over again—from her mother’s viewpoint in the dream, or from her own, in the real-life aftermath.

She, after all, was the one who found Stephanie Lauder Delaney on that nightmarish July afternoon, her broken corpse lying in a pool of blood at the bottom of the stairs.

There was no manila envelope near her body. Calla would have seen it.

“I have no idea,” she says, well aware that Lisa’s just trying to humor her, and wondering why she bothered to bring this up in the first place.

But when Lisa happened to call just now and asked how she’s been, Calla found herself blurting it out.

“So the only place you ever saw this envelope was in your dream last night?” Lisa asks, and Calla hesitates.

Should she tell Lisa the rest of it—about the mysterious man who popped up on their Tampa doorstep back in March, carrying the envelope and asking for Mom? About how he was whistling the same unfamiliar tune Calla would later hear 2 again here in Lily Dale—coming from Mom’s girlhood music box, which, oh yeah, plays without being wound, has been known to open all by itself, and somehow contained Mom’s emerald bracelet, which, the last time Calla saw it, was dropping off her own wrist and falling into Mom’s grave?

No, she can’t tell Lisa any of that. Not yet. And not over the phone. The whole thing is just too bizarre and complicated. “The thing is, I know my mother had the envelope when she fell,” she tells Lisa simply. “I saw it.”

“I
felt
someone push her down the stairs.”

“Because you were
her
.”

“Right.” Calla tries not to resent Lisa’s skepticism. After all, if she were in her friend’s shoes—which she
was
just a few months ago, before her own life back home in Florida was shattered—she’d probably react the same way.

But now, here in Lily Dale—a legendary open portal between the living and the dead—anything seems possible.

Lisa sighs. “I know the last few months have been really hard for you, and what happened to your mom was so totally unfair, no wonder you’ve been looking for some kind of—”

“No, Lisa—it’s not that. I haven’t been looking for anything. I wasn’t even awake!” Agitated, she paces across the floor again, brushing against a towering stack of Odelia the packrat’s books on the coffee table. “I mean . . . come on, haven’t you ever dreamed that you were someone else?”

“Maybe Britney Spears back when I was, like, eight, and she was, like, famous for her singing instead of—”

That, Calla figures, is because Lisa’s dreams are only dreams.

Her own dreams—at least, the ones she’s had since she arrived in Lily Dale—are actual visions.

She supposes she could try to explain to Lisa that when you’re completely relaxed and asleep, you’re much more open to spirit energy than during waking hours. So the dearly departed might take advantage of that state to pop in for a visit or send a message—like, you might witness something that happened in the past or will happen in the future.

When you think about it, it makes a lot of sense. To Calla, anyway.

It probably wouldn’t to Lisa, a thousand miles away in Florida, where the veil to the Other Side is thicker than the southern sky before an afternoon thunderstorm.

“Lisa? You still there?”

“I know, but . . .” Calla trails off, her breath catching in her throat as she spots a flicker of movement in the next room and realizes she’s not alone in the house. A shadowy figure is—

It’s just Miriam, the nineteenth-century household ghost, drifting past the doorway. Miriam’s husband built this house in 1883 and she spent the rest of her life here . . . and then some. She likes to keep an eye on things, though she’s been known to tamper with lights and electrical appliances, apparently just as a gentle reminder that she hasn’t moved out—or on.

Wait . . . did you just reassure yourself that it was
just
the household
ghost?

Okay, Lily Dale’s definitely rubbing off on her. Next thing she knows, she’ll be exchanging cake recipes with Marie Antoinette.

It took her a while to figure out that she herself might be . . . gifted.

Might be? Um, hello, you definitely have a sixth sense and you
really need to get used to it.

Yeah. Used to dreams that are more than just dreams. Used to knowing things she couldn’t possibly know and seeing things no one else can see.

Because lately, she’s been . . . seeing things. People. Out of the corner of her eye, mostly. She’ll think someone is there and turn her head just in time to catch a human figure before it disappears.

Occasionally, she can actually make out whether it’s a man, a woman, a child. Most of the time, the figure is indistinct, although there have been a few who have come through so vividly that she thought at first they were alive.

Apparently, now that Calla’s settled into Lily Dale, the ghosts who populate the earthly plane have decided to start showing themselves to her. Or maybe it’s more that she’s decided, subconsciously, to let herself see them. Either way, the situation is unnerving, compelling . . . and frustrating.

Take Miriam. She’s often flitting around the house, but Calla has yet to get a good look at her. Odelia, Calla’s eccentric grandmother, says she’s shy. She also says that Calla will eventually fine tune her sixth sense and consistently be able to see Miriam—and the others—as clearly as if they were real live people.

At least Miriam sent Calla a message, through Odelia, on her first day here, reassuring Calla that she’s harmless.

And I guess I bought it. After all, now she’s
just
the household
ghost.

But Lisa would never understand that . . . or anything else about Lily Dale.

Them,
as in Odelia and the rest of the spiritualists here in Lily Dale. When Lisa visited for Labor Day weekend, she wasn’t exactly thrilled to find herself in a town filled with “kooky”—her word—mediums. Which is why Calla didn’t dare mention that she herself had been seeing ghosts.

She definitely doesn’t have to admit to that now, but she does need to tell someone she’s been having these psychic visions about her mother’s death all week. And Lisa is, after all, her best friend—a thousand miles away or not.

Startled by a noise behind her, Calla turns, wondering if Miriam is back.

The kitten is up on all four legs, fixated on something just behind Calla. Her back is arched like that of a Halloween cutout cat, front paws poised as if ready to pounce.

Afraid to turn to see what, or who, might have come up behind her, Calla is certain that she and Gert are no longer alone in the room. The temperature seems to have dropped by about twenty degrees. Goose bumps ache on her arms beneath the thick sleeves of her hooded sweatshirt.

She swallows hard, takes a deep breath, and slowly spins around, hoping she’s wrong and that the spot will be empty.

Gagged by Aubrey Parker
Tree of Smoke by Denis Johnson
Hosker, G [Sword of Cartimandua 04] Roman Retreat by Griff Hosker
Prince of Shadows: A Novel of Romeo and Juliet by Caine, Rachel
A Treasury of Miracles for Friends by Karen Kingsbury
Death of an Elgin Marble by David Dickinson
Drat! You Copycat! by Nancy Krulik
Blackheart by Raelle Logan
Cold Comfort by Ellis Vidler
Tears of Blood (The Blood Chronicles) by Quijas, Tamela
Our partner