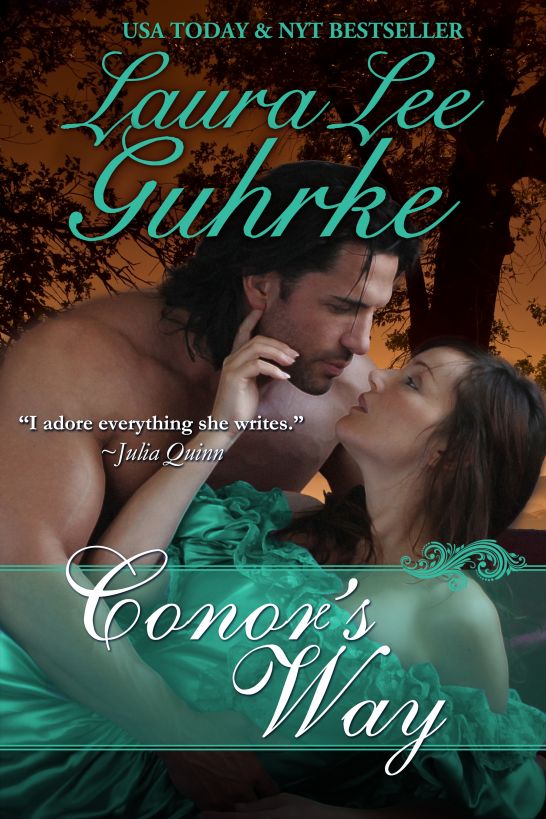 This is a work of fiction. The characters,
incidents, and dialogues are products of the author's imagination
and are not to be construed as real. Any resemblance to actual
events or persons, living or dead, is entirely coincidental.

All rights reserved. No
part of this book may be used or reproduced in any manner
whatsoever without written permission of the author, except in the
case of brief quotations embodied in critical articles and
reviews.
The scanning, uploading, and distribution of this
book via the internet or any other means without permission of the
author is illegal. The author requests that you purchase only
authorized electronic editions, and that you do not participate in
or encourage the electronic piracy of copyrighted material. Thank
you for your support of authors’ rights.

For John, of course. Who else would put up with
calls at one o'clock in the morning Belfast time to answer
questions about Gaelic? With much love, as always.

When Conor Branigan ducked under the ropes
and entered the ring, the men of Callersville knew he was just too
pretty to be a good fighter. Women, of course, would have expressed
a rather different opinion of the matter, but no women were there.
As it was, the men of Callersville took one look at Conor's lean
body and handsome face, and decided they had a sure winner in their
local champion.

Conor paused in the center of the ring and
responded to the boos and whistles that greeted him, the outsider,
with an impudent salute just for show. Then he sauntered over to
his corner of the ring and prepared to wait while the bookmaker's
clerk took the last bets. His blue eyes scanned the rowdy
Friday-night crowd without noticing any face in particular. After
twenty towns and twenty fights in seventy days, all the faces
looked the same— shiny with sweat, eager for the fight, and
anonymous.

But Conor didn't mind that. Life on the
boxing circuit suited him. If he won the fight tonight, he'd
celebrate his victory by taking a hot bath, smoking a strong
cigar, and sharing a bottle of good Irish with some carmine-lipped
angel of mercy who asked for nothing more than a dollar bill and a
kiss good-bye. Tomorrow, he'd move on to the next town and the next
fight.

No ties, no family, no commitments. That was
Conor's life now. And that was the way he liked it.

A round of cheers went up as his opponent
entered the tent, and Conor turned to watch Elroy Harlan make his
way through the crowd. The reigning champion of Jackson Parish and
the odds-on favorite was a huge, hulking wall of a man who stepped
into the ring amid the encouraging shouts of his friends and
neighbors.

Conor figured that Elroy outweighed him by a
good forty pounds, but he knew from experience the big ones were
usually too slow. If Elroy had a build similar to his own, Conor
might have been worried, but when Elroy moved to his own corner and
scowled at him across the ring, Conor just leaned back against the
ropes and gave the other man a deliberately provoking smile.
Provoked men got angry.

Prizefighting was just a job, a way to make a
living. It wasn't fun, but it was better than gutting fish in
Boston or cleaning up horse dung in the streets of New York twelve
hours a day for a pittance wage. It was better than swinging a
sledgehammer under the hot sun on the railroad line. Conor worked
only two nights a week, five months a year, and the rest of the
time, he was free. He answered to no one, he needed no one. Yes,
life on the boxing circuit suited him just fine.

"Getting a bit cocky, aren't you?"

Dan Sweeney's voice interrupted his thoughts,
and Conor turned his head to give his manager a careless shrug. "I
can't help it, Danny. Look at the man. I probably won't even have
to hit him. I'll just dance around him until he's so dizzy, he just
falls down."

Conor's style of boxing was something the two
men had often joked about, but this time, Dan didn't laugh.
Instead, he glanced around, then leaned closer, resting his
forearms on the ropes between them. "Odds are in, boyo."

Dan rubbed one hand across his jaw. "No
surprise. Elroy's the heavy favorite. But all the bets on him have
been small, each no more'n a dollar or two." Dan paused, then
added, "On the other hand, a couple rich men are up here from New
Orleans. Saw you fight at Shaugnessey's last spring, and they've
bet the limit on you. Five hundred each."

"Then they'll be even richer pretty
soon."

But Dan shook his head. "No, lad. The
bookmaker had a wee talk with me, and he's made it clear he'd
rather not pay out that kind of money, if you take my meaning."

Conor did. If Elroy won, the payouts would be
many, but paltry, and the bookmaker would make a nice profit on the
bets of the two men from New Orleans. If Conor won, only those two
men would walk away winners, but the bookmaker would lose a lot of
money. He met Dan's eyes and said it aloud. "He wants me to go
down."

"Let's just say it'll be healthier for us all
if Elroy wins this one."

Conor smiled again, a benign smile. "Over my
dead body."

Dan scowled at him. "That could happen," he
muttered. "Don't be stupid."

The referee beckoned Conor forward,
indicating that the fight was about to begin, and Dan stepped back.
Conor straightened away from the rope and moved toward the center
of the ring as he unbuttoned his shirt. Dan was right. He'd never
been ordered to go down before, but he knew if he defied the
bookmaker, he was asking for trouble. He might make it out of the
tent, he might even make it out of town, but he wouldn't get much
further than that. Better to just let old Elroy sneak in a punch
that would send him down to the floor. Easier. Safer.

Conor shrugged out of his shirt and tossed it
to land in the corner behind him. Shocked murmurs rippled through
the crowd at the scars that scored his chest and back, and Conor
responded to the stares and speculative whispers as he always did.
He ignored them.

But his outward calm was a deception. There
were some who thought those scars were badges of valor and courage,
but Conor knew the truth. He felt the old familiar hatred stir deep
within him as he remembered the men who had given him the scars.
Men who had stripped away everything he was, piece by bloody piece,
until he had become what they wanted, until he had become the very
thing he hated most. Now, he kept that hate buried deep, hidden by
a cocksure smile and an arrogant confidence, but it never left
him.

Some things never
change
, he thought, as he waited for the
referee to signal the beginning of the fight. This wasn't Ireland,
but there were still men who demanded his subjugation, men who
wanted to own him, use him. Rebellion flared, sudden and
hot.

The referee drew the line of powdered chalk
in the dust. Toe the line, gentlemen!" he shouted, and jumped out
of the way. "No kicking, no gouging, no biting."

The rosary of the
prizefighter. A litany Conor heard twice a week from May to
September.
Hail Mary
, he thought, and ducked as Elroy swung at him with a
ham-sized fist.
And going down be
damned
.

The fist sailed over his head. Conor
straightened, then punched hard, left to the ribs, right to the
jaw, left to the ribs again, but he jumped back before an
answering blow could touch him.

He glanced at Dan, and saw
the old man shaking his head. He knew that before the fight was
over, Dan would be long gone, and he'd be facing the consequences
of his choice alone.
Aye. Some things
never change
.

Elroy swung again, but this time Conor wasn't
quite quick enough. The fist slammed into his cheek, and he
staggered back a step, seeing stars.

Jaysus, Conor, get out of
the way
. He could hear his brother Michael
giving him instructions as if they were boys again, as if this were
a field back home in Derry, not a sweat-scented tent in Louisiana,
as if Michael were still alive.
Don't just
stand there. When he's comin' for you, get out of the
way
.

Elroy lunged again, fists flailing, and Conor
took his brother's advice. He ducked to the left, hammered three
punches in Elroy's gut, and danced out of reach. Then he spun full
circle and heard the crack of bone against bone as his fist caught
Elroy with an uppercut to the jaw.

Elroy stumbled, recovered his balance, and
lifted his fist for an answering punch. But Conor wasn't there.

"What the hell?" Elroy muttered and looked
around in confusion.

Conor gave a beckoning whistle, and the other
man turned around just in time for the final blow. A groan of
dismay went up as Jackson Parish's reigning champion hit the dirt
with a resounding thwack. Conor hung back, shifting his weight from
one foot to the other, breathing through his teeth, waiting to see
if Elroy would rise to continue the fight. The other man tried, but
he couldn't even get to his knees.

Conor claimed victory by raising one clenched
fist in the air as Elroy was dragged out of the ring. Michael would
have been proud.

But he knew his triumph would be short-lived,
and the price for it would be dear. He walked to his corner and
grabbed a towel. As he wiped the sweat from his face, he watched
the losing bettors head for the exit. Only two men stopped by the
bookmaker's table to collect their winnings, and Conor knew they
were the two rich men from New Orleans.

As he'd suspected, Dan was gone. The promoter
handed him the twenty-five dollars in prize money, and he tucked
the folded greenbacks into a flap inside his boot, even though he
knew the bookmaker's men would take it back, probably just before
they beat the hell out of him.

The Rogue Hunter by Lynsay Sands
Countdown to Terror by Franklin W. Dixon
The Affair of the Poisons: Murder, Infanticide and Satanism at the Court of Louis XIV by Anne Somerset
The Eden Inheritance by Janet Tanner
A Stroke Of Magic by Tracy Madison
Isle of Mull 03 - To Love a Warrior by Lily Baldwin
Breaking the Chain by Maggie Makepeace
The Master's Wife by Jane Jackson
Curly Bill and Ringo by Holt, Van
Death at Rottingdean by Robin Paige
Our partner