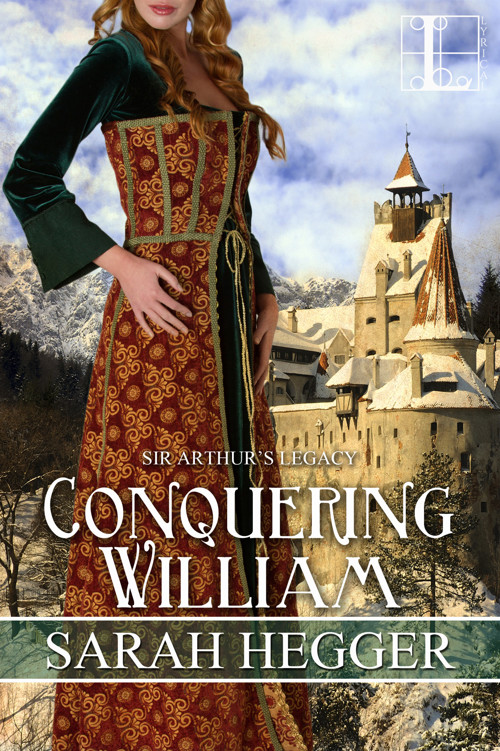 He married for convenience, but William of Anglesea had hoped for more than piety from his new bride. Raised in a convent and thrice widowed, prim Lady Alice of Tarnwych seems like an innocent when it comes to the marriage bed—except for the tentative passion he senses in her touch, and sees in her eyes. It seems the bold knight has a new challenge in alluring Alice. But will seducing his intriguing wife lead to his downfall?

Everything about charming, free-spirited William defies the cloistered world Lady Alice comes from. Duty brings her to their bed—and a long-held hope for a child. Yet after three indifferent husbands, the desire William shows her awakens her own. Little did Alice expect the powerful feelings he would inspire, emotions that make her ready to abandon her rigid beliefs, and the only family she’s ever known—when William’s life is on the line….

“Sarah Hegger has a gift for storytelling that is not to be missed. She's a personal favorite of mine.”

I would like to thank Penny Barber for all she does to grow me as a writer, and the team at Lyrical who add so much to the words I put on the page. And to all the members of the Sarah Hegger Collective, you guys keep me smiling.

If she lived to be a hundred, Alice never wanted to attend another wedding, particularly not as the bride. The odor of roasting meats almost undid her, and she took a long draught from her water goblet. A bride did not vomit all over her wedding feast.

Her father, face ruddy with wine, sidled up and pinched her side. “God’s teeth! Smile, you stupid wench. I have found you a good ‘un this time. Far better than a butter-face like you could hope for.” Goblet held high, he strode away, sprinkling wine across the heads of those he passed. His forced laughter grated on her ear.

To her right, her groom drank from his goblet. In a deep, smooth voice, he murmured to his mother on his other side. As he shifted, his muscular thigh pinned her skirt to the bench.

He inclined his head with a smile, moved his leg, and freed her skirt. “I beg your pardon.”

God save her from her beautiful husband. “No matter.”

“May I serve you more water?” Eyes deeper blue than the lake beneath the castle twinkled at her. Candlelight gleamed off his dark hair and clung to his finely etched face.

With another smile, he turned back to his mother.

She would prefer if he did not smile so much. Or did not smell so appealing. His subtle woodsy-sweet spice teased her every time he leaned nearer. He did quivering things to her innards. How could she hope to hold a man such as this? Atop the scarred table, their trencher sat between them, still full of mutton, gravy oozing into a brown puddle on the table. It couldn’t be worse. Her father had outdone himself this time. Three husbands he’d chosen for her and this one, by far, the most daunting.

Aye, but William of Anglesea would make fine children. Tall, strong boys, broad and powerfully built like their sire, and girls to take after his mother and sisters. A child of her own. A downy head nestled against her breast, a tiny body cradled in her arms. She touched her palm to her flat, empty belly, and put her hand back on the table before anyone could notice. Even butter-faces had dreams.

A jester before the dais capered about, ringing his bells and doing his best to enthuse the assembly with joviality. Poor man raised only titters of amusement. He must have come with her father for the wedding, for they had no resident jester at Tarnwych. A few determined souls cheered the jester on his way, and a band of minstrels took his place. The cheery pipes led the lutes into songs praising the bride’s beauty and the groom’s virility. Could they not spare her those? She’d wager the minstrels would change their songs when they left for the inn tonight.

The bawdy ballad of Alice of Tarnwych and William of Anglesea. She made up her own words to the cheerful wedding song the minstrel band warbled.

The peacock ruts with a dull, brown wren,

The peacock ruts with a dull, brown wren,

William, the peacock, with his striking looks and finery had stood beside her in the chapel, and the top of her head had only reached his shoulder. How the ladies in attendance had sighed as he dipped his dark head and recited his vows to her, the dull, little wren in her brown wool dress with her atrocious hair confined to a wimple. Both William’s sisters boasted glorious flaxen hair the hue of summer wheat, not brazen red. Willowy and graceful they glided in rich, silk slippers like butterflies, whilst she stomped around in her sensible clogs.

Sister Julianna leant in and kept her voice low. “This is a bad business. This family is sown with wild, spoiled seed.”

Then there was that. Whispers of the taint on Sir Arthur’s beautiful family carried even this far north.

“It is time.” Gracious and lovely, Lady Mary of Anglesea rose with a sweet smile for Alice. “Shall we?”

“Aye, let us get to the meat of the matter.” Smug grin eating his face, her father thumped the table.

Rising too, Sir William offered his hand to her. Grip warm and sure, he helped her climb over the bench, then straightened her skirts for her. No fault could she find with her groom’s manners. As far as she could see, he had no faults at all. Men like William should marry their faultless equals. How different would this be if she looked like his mother and sisters? If she could enter his bed with her head held high, confident in her groom’s delight in her beauty.

The other women stood with her. Lady Faye, flawless and serene in her pregnancy, golden hair framing her enchanting face. Her second new sister-in-law, Beatrice. Bea, they called her, and on occasion Sweet Bea. Not as fair as Faye, but her pretty countenance made more so by the lively march of humor across it.

God mocked her by surrounding her with all this overbearing comeliness.

“Come along, then.” Beatrice’s smile stretched false with forced good cheer. Nay, they no more welcomed this match for their brother than she did.

Another wedding night and she would endure.

Drained, her face stiff from forcing a smile, Alice tottered to the bed and perched on the edge.

Sister Julianna shut the door on the determinedly cheery faces of Sir William’s womenfolk. “I would not have you suffer those women at such a time.” Sister Julianna slid the bolt home. “It is bad enough your father ties you in marriage to such a family.”

“Lady Mary seemed most gracious.” William’s mother had made a point of wishing her well and welcoming her to the family, pressing a kiss on her cheek after the ceremony.

“Poor woman.” Sister Julianna smoothed the front of her pristine scapula. “Beset by such a husband. Your father may have forgotten Sir Arthur took his army and marched on King John, but those of us who value loyalty have not.”

“They say the new king has forgiven him.” Even this far north, King John’s infamy had touched their lives. Long, hard winters had marked the late king’s reign.

“King Henry is but a child. We must pray that the guidance of his guardian, the Holy Father, will prevail.” Sister Julianna crossed herself and raised her eyes to the roof. “We must pray that…abomination never takes up residence beneath this roof.”

“Amen,” Alice whispered, because Sister would expect it. She hadn’t yet seen the child Sister called the Abomination of Anglesea, but she wasn’t sure any child should bear such a name. They had named him Mathew. Several years younger than his siblings, he must suffer a lonely existence with his brothers and sisters getting wed and moving away. If not for Sister Julianna, she would have wandered her father’s keep for days without a soul bidding her good morrow, or even playing with her. Sister did not play, but she had provided company for a motherless little girl. Certainly, her father found no favor in his only child, a plain and quiet disappointment to him all these years.

“This is not your first wedding night.” Sister Julianna folded her hands before her.

“Nay.” It was her fourth, and she was as nervous as a first-time bride. Sir William unsettled her, left her stomach tangled. He would enter this chamber and find her not like the women he had known before. The ladies liked William of Anglesea. Her father made sure to tell her so. All the loveliest ladies of the court flocked to him. Rubbing his huge hands together with glee, her father had informed her of her good fortune, congratulating himself on the rich prize he had landed.

“You know what to expect.” Sister turned her about and worked on the lacings of her bliaut. “As is fitting, you must submit to your husband. It is the lot of women to suffer the bestial nature of men.”

“Aye, Sister.” Alice clasped her shaking hands together. She had done this before, her virginity long gone. What came next would be uncomfortable, a little painful, but her husband would satisfy his lusts and leave her.

“I am afraid he looks like a lustful one.” Sister tugged her bliaut off. She brought Alice her nightrail and slipped it over her head.

Beneath the garment, Alice wriggled out of her chemise. Sister insisted on modesty at all times. “I see my wedding nightrail survived the moths.”

“Indeed.” Sister bent and snatched her chemise. “I laid it amongst layers of bay leaves, in case you would have need of it again. The devil employs wanton waste to his own ends. Our Lord frowns on excess.”