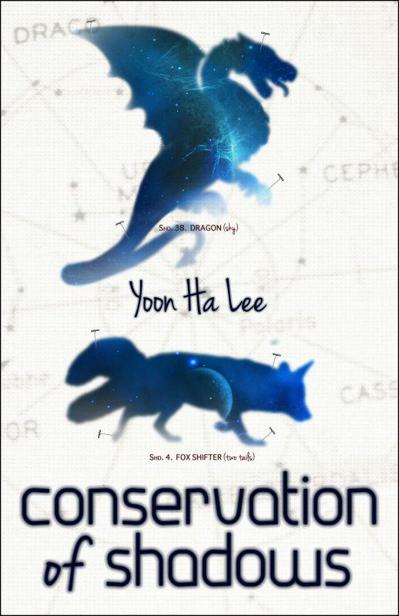 Publisher’s Note: No portion of this book may be reproduced by any means, mechanical, electronic, or otherwise, without first obtaining the permission of the copyright holder.

The Bones of Giants

The Battle of Candle Arc

A Vector Alphabet of Interstellar Travel

The Book of Locked Doors

In my other life, I am a computer engineer; and I do a lot of mathematics. Mathematics, like most sciences, presents laws and models that are meant to hold true in reality—but, like most sciences, maths is constantly evolving and adapting itself to new observations that do not fit its models.

One thing I find amazing about Yoon Ha Lee’s fiction is to see it so steeped in that same logic, and to find across her stories the same fascination about models. Models can dictate the behaviour of the universe, and yet at the same time fail to describe its complexity. Lee’s stories present, over and over, this fundamental tension between image and truth; between myth and reality; between actual behaviour and model. This is nowhere more evident than in “The Book of Locked Doors,” where the eponymous book draws magic from memories of dead people, forever frozen in misleading, one-purpose images: the dead are recorded only through their ability to practise magic, and this magic is the only thing that the book provides to its users.

Yoon Ha Lee has been one of those fairly discreet authors: her first story was published in 1999, long before I entered the science fiction and fantasy writing scene. She has since then been reprinted in various “year’s best” anthologies, but to the best of my knowledge, seldom shortlisted for major awards, and Lee herself has remained relatively discreet. To my mind, this is a shame, as her talent for intricate world-building as well as writing multi-layered, subtle fiction has mostly gone unrecognised. Stories like “Ghostweight” or “Flower, Mercy, Needle, Chain,” with their Asian-inspired Galactic empires, their original take on branching multiple universes, their idiosyncratic approach to ancestor worship and the preservation of the dead, are among the best and most memorable short fiction I have read.

Lee’s flavourful and original settings range from competing starfaring empires in the far future to re-imagined histories, whether medieval or otherwise. Her characters are researchers and magicians, often forced into figuring out the rules of the world; but also generals and war-heroes, soldiers who do not necessarily have a taste for battle but do what they do for love of their people—and do it terribly well, with devastating consequences.

One thing Lee does not shy from is portraying the harrowing cost of war, genocide, and occupation, whether it is for the occupying forces or for those fighting for peace or independence. It is something I particularly appreciate in her fiction: far from glorifying war, Lee provides a thoughtful, nuanced examination of the cost of violence; of how war can be dehumanising but at the same time utterly necessary; of how a national identity builds and maintains itself in times of strife. That Lee is Korean-American, from a country that was devastated and separated several times by war, certainly informs and nourishes those narrations. As a Franco-Vietnamese, with roots in another country that has had its share of divisive and painful conflicts, I find this counterpoint to other more jingoistic narrations (sadly all too present in genre) both appreciable and much-needed. Stories like “Between Two Dragons” or “Blue Ink” are all the more striking because of this thematic undercurrent.

There are sixteen stories in this collection. In them you will find a war-kite pilot carrying the ghost of a compatriot in her head, a civilisation which kills others by taking and twisting their language, ships of soldiers passing through a black hole to reach a battle at the end of time, a dozen dizzying ways to travel through space, and many more such wonders, which I hope you find as breathtaking and as haunting as I did.

It is not true that the dead cannot be folded. Square becomes kite becomes swan; history becomes rumor becomes song. Even the act of remembrance creases the truth.

What the paper-folding diagrams fail to mention is that each fold enacts itself upon the secret marrow of your ethics, the axioms of your thoughts.

Whether this is the most important thing the diagrams fail to mention is a matter of opinion.

“There’s time for one more hand,” Lisse’s ghost said. It was composed of cinders of color, a cipher of blurred features, and it had a voice like entropy and smoke and sudden death. Quite possibly it was the last ghost on all of ruined Rhaion, conquered Rhaion, Rhaion with its devastated, shadowless cities and dead moons and dimming sun. Sometimes Lisse wondered if the ghost had a scar to match her own, a long, livid line down her arm. But she felt it was impolite to ask.

Around them, in a command spindle sized for fifty, the walls of the war-kite were hung with tatters of black and faded green, even now in the process of reknitting themselves into tapestry displays. Tangled reeds changed into ravens. One perched on a lightning-cloven tree. Another, taking shape amid twisted threads, peered out from a skull’s eye socket.

Lisse didn’t need any deep familiarity with mercenary symbology to understand the warning. Lisse’s people had adopted a saying from the Imperium’s mercenaries:
In raven arithmetic, no death is enough.

Lisse had expected pursuit. She had deserted from Base 87 soon after hearing that scouts had found a mercenary war-kite in the ruins of a sacred maze, six years after all the mercenaries vanished: suspicious timing on her part, but she would have no better opportunity for revenge. The ghost had not tried too hard to dissuade her. It had always understood her ambitions.

For a hundred years, despite being frequently outnumbered, the mercenaries in their starfaring kites had cindered cities, destroyed flights of rebel starflyers, shattered stations in the void’s hungry depths. What better weapon than one of their own kites?

What troubled her was how lightly the war-kite had been defended. It had made a strange, thorny silhouette against the lavender sky even from a long way off, like briars gone wild, and with the ghost as scout she had slipped past the few mechanized sentries. The kite’s shadow had been human. She was not sure what to make of that.

The kite had opened to her like a flower. The card game had been the ghost’s idea, a way to reassure the kite that she was its ally: Scorch had been invented by the mercenaries.

Lisse leaned forward and started to scoop the nearest column, the Candle Column, from the black-and-green gameplay rug. The ghost forestalled her with a hand that felt like the dregs of autumn, decay from the inside out. In spite of herself, she flinched from the ghostweight, which had troubled her all her life. Her hand jerked sideways; her fingers spasmed.

Few cadets had played Scorch with Lisse even in the barracks. The ghost left its combinatorial fingerprints in the cards. People drew the unlucky Fallen General’s Hand over and over again, or doubled on nothing but negative values, or inverted the Crown Flower at odds of thousands to one. So Lisse had learned to play the solitaire variant, with jerengjen as counters.
You must learn your enemy’s weapons,
the ghost had told her, and so, even as a child in the reeducation facility, she had saved her chits for paper to practice folding into cranes, lilies, leaf-shaped boats.

Next to the Candle Column she had folded stormbird, greatfrog, lantern, drake. Where the ghost had interrupted her attempt to clear the pieces, they had landed amid the Sojourner and Mirror Columns, forming a skewed late-game configuration: a minor variant of the Needle Stratagem, missing only its pivot.

“Consider it an omen,” the ghost said. “Even the smallest sliver can kill, as they say.”

There were six ravens on the tapestries now. The latest one had outspread wings, as though it planned to blot out the shrouded sun. She wondered what it said about the mercenaries, that they couched their warnings in pictures rather than drums or gongs.

Lisse rose from her couch. “So they’re coming for us. Where are they?”

She had spoken in the Imperium’s administrative tongue, not one of the mercenaries’ own languages. Nevertheless, a raven flew from one tapestry to join its fellows in the next. The vacant tapestry grayed, then displayed a new scene: a squad of six tanks caparisoned in Imperial blue and bronze, paced by two personnel carriers sheathed in metal mined from withered stars. They advanced upslope, pebbles skittering in their wake.

In the old days, the ghost had told her, no one would have advanced through a sacred maze by straight lines. But the ancient walls, curved and interlocking, were gone now. The ghost had drawn the old designs on her palm with its insubstantial fingers, and she had learned not to shudder at the untouch, had learned to thread the maze in her mind’s eye: one more map to the things she must not forget.

“I’d rather avoid fighting them,” Lisse said. She was looking at the command spindle’s controls. Standard Imperial layout, all of them—it did not occur to her to wonder why the kite had configured itself thus—but she found nothing for the weapons.

“People don’t bring tanks when they want to negotiate,” the ghost said dryly. “And they’ll have alerted their flyers for intercept. You have something they want badly.”

“Then why didn’t they guard it better?” she demanded.

Despite the tanks’ approach, the ghost fell silent. After a while, it said, “Perhaps they didn’t think anyone but a mercenary could fly a kite.”

“They might be right,” Lisse said darkly. She strapped herself into the commander’s seat, then pressed three fingers against the controls and traced the commands she had been taught as a cadet. The kite shuddered, as though caught in a hell-wind from the sky’s fissures. But it did not unfurl itself to fly.

She tried the command gestures again, forcing herself to slow down. A cold keening vibrated through the walls. The kite remained stubbornly landfast.

The squad rounded the bend in the road. All the ravens had gathered in a single tapestry, decorating a half-leafed tree like dire jewels. The rest of the tapestries displayed the squad from different angles: two aerial views and four from the ground.

Lisse studied one of the aerial views and caught sight of two scuttling figures, lean angles and glittering eyes and a balancing tail in black metal. She stiffened. They had the shadows of hounds, all graceful hunting curves. Two jerengjen, true ones, unlike the lifeless shapes that she folded out of paper. The kite must have deployed them when it sensed the tanks’ approach.

Sweating now, despite the autumn temperature inside, she methodically tried every command she had ever learned. The kite remained obdurate. The tapestries’ green threads faded until the ravens and their tree were bleak black splashes against a background of wintry gray.

It was a message. Perhaps a demand. But she did not understand.

The first two tanks slowed into view. Roses, blue with bronze hearts, were engraved to either side of the main guns. The lead tank’s roses flared briefly.

The Ghostly Mystery by David A. Adler
A Week of Mondays by Jessica Brody
The Love Goddess' Cooking School by Melissa Senate
Death of the Black-Haired Girl by Robert Stone
The Girl in the Steel Corset by Kady Cross
Deeply Destructive (Addicted To You, Book Four) by Covington, Lucy
One Night With My Billionaire Master by Cynthia Sax
My Week with Marilyn by Colin Clark
Solitaire, Part 3 of 3 by Alice Oseman
Sweetest Surrender by Katie Reus
Our partner