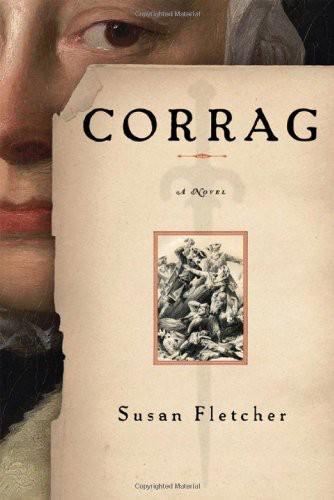 I had an unexpected request the other day; there had been two bad landslides where the bulldozers have been working on the slate banks. Someone…said it was because the workmen had been disturbing the grave of Corrag. Corrag was a famous Glencoe witch…One point of interest about her is that in spite of reputed badness, she was to have been buried on the Burial Island of Eilean Munda. It was often noticed that however stormy the sea, or wild the weather, it habitually calmed down to allow the boat out for a burial. In the case of Corrag the storm did not cease till finally she was buried beside where the road now runs. By the way, in the Highlands, islands were used for burial very widely. Remember wolves remained here very much later than in the south.

More things are learnt in the woods than in books. Animals, trees and rocks teach you things not to be heard elsewhere.

I can’t think of a winter that has been this cruel, or has asked so much of me. For weeks now, it has been blizzards, and ice. The wind is a hard, northern one—it finds its way inside my room and troubles this candle that I’m writing by. Twice it has gone out. For the candle’s sake I must keep this brief.

I have news as foul as the weather.

Edinburgh shivers, and coughs—but it whispers, too. In its wynds and markets, there are whispers of treachery—of a mauling in the brutish, Highland parts. Deaths are often violent there, but I hear these were despicably done. A clan, they say, has been slaughtered. Their guests rose up against them and killed them in their beds.

On its own, this is abhorrent. But there is more.

Jane—they say it was soldier’s work.

Of all people, you know my mind. You know my heart, and if this is true—if it was soldiers’ hands that did this bloodiness—then surely it was the King who ordered it (or I will say the Orange, pretending one, for he is not my king).

I must leave for this valley. They call it wild and remote, and it’s surely snowbound at this time—but it’s my duty. I must learn what I can and report it, my love, for if William is behind this wickedness it may prove his undoing, and our making. All I wish, as you know, is to restore the true King to his throne.

Pray for my task. Ask the Lord for its safe and proper outcome. Pray for the lives of all our brothers in this cause, for we risk so much in its name. Pray, too, for better weather? This snow gives me a cough.

The candle gutters. I must end this letter, or I shall soon be writing by the fire’s light which is not enough light for my eyes.

“The Moon is Lady of this.”

W
hen they come for me, I will think of the end of the northern ridge, for that’s where I was happiest—with the skies and wind, and the mountains being dark with moss, or dark with the shadow of a cloud moving across them. I will think of how it is when part of a mountain brightens very suddenly, so it is like that rock is chosen by the sun—marked out by sunshine from all the other rocks. It will shine, and then grow dark again. And I’ll stand with my skirts blowing, make my way home. I will have that sunlit rock in me. I will keep it safe.

Or I’ll think of how I ran with the snow coming down. There was no moon, but I saw the morning star, which they say is the Devil’s star but it is love’s star, too. It shone, that night—so brightly. And I ran beneath it thinking
let all be well let all be well.
Then I saw the land below which was so peaceful, so white and still and sleeping that I thought maybe the star had heard and all
was
well—no death was coming near. It was a night of beauty, then. For a while, it was the greatest beauty I had ever seen in all my life. My little life.

Or I will think of
you
.

In my last, quiet moments, I will think of him beside me. How, very softly, he said
you
…

S
OME
called it
a dark place
—like there was no goodness to be found inside those hills. But I know there was goodness. I climbed into its snowy heights. I crouched by the loch and drank from it, so my hair was in the water, and I lifted up my head to see the mist come down. On a clear, frosty night, when they said all the wolves were gone, I heard a wolf call from Bidean nam Bian. It was such a long, mournful call that I closed my eyes to hear it. It mourned its own end, I think, or ours—as if it knew. Those nights were like no other nights. The hills were very black, like they were shapes cut out of cloth, and the cloth was dark-blue, starry sky. I knew stars—but not as those stars were.

Those were its nights. And its days were clouds and rocks. Its days were paths in grass, and pulling herbs from soggy places that stained my hands and left their peaty smell on me. I was damp, peat-smelling. Deer trod their ways. I also trod them, or nestled in their hollows and felt their old deer-warmth. I saw what their black deer-eyes had seen, before my own. Those were its days—small things. Like how a river parts around a rock and joins again.

I had to find it—darkness. I had to push rocks from their resting place, or look for it in caves. The summer nights could be so light, so full of light that I curled up like a mouse, hid my eyes beneath my hand so I might find a little dark to sleep inside. It is how I sleep, even now—tucked up.

I will think this way. When my life is ending. I will not think of musket shots or how it smelt by Achnacon. Not of bloodied things.

I will think of the end of the northern ridge. How my hair blew all about me. How I saw the glen go light and dark with clouds, or how he said
you’ve changed me,
as he stood by my side. I thought
this is the place,
as I stood there. I thought
this is my place
—mine, where I was meant for.

It was waiting for me, and I found it, in the end.

No rivers for me, now. No bogs.

Now I am in chains. I’m in a half-dark cell with shackles on my wrists, and wet straw to lie upon. A cracked bucket. Bars.

And it snows. From the little window, I can see it snows. It’s been months, I think, of snowing—of bluish ice, and cold. Months of clouded breath. I blow, and see my breath roll out and I think
look. That is my life. I am still living.

I like it—snow. I always did. I was born in a sharp, hard-earth December, as the church folk sang about three wise men and a star through their chattering teeth. Cora said that the weather you are born in is yours, all your life—your own weather.
You will shine brightest in snowstorms
she told me.
Oh yes…
I believed her—for she was born in thunder, and was always stormy-eyed.

So snow and ice is mine. And I have known some winters. I’ve heard fish knock beneath their ice. I’ve seen a trapdoor freeze so it could not go
bang,
though they still took the man’s life away, in the end. Me? I’m a hardy thing. People die from the cold, but I haven’t. I’ve not had blue skin, not once—a man said it was the evil fire in me that kept me warm, and
bind that harlot up
. But it was no evil fire. I was just born in snowy weather and had to be hardy, to stay living. I wanted to live, in this life. So I grew strong, and did.

I have many names. Never mind my hardy ways—it was my looks which brought the word
hag
out, at first, with my eyes like ghosts and my tiny size. My mother’s nature did not help. She of the wild nights. She who threw back her hair, who lay on the leaf mulch in evening woods to breathe in its smell and soak up its age. She’d come home with dirty hands, a dirty face.
Her daughter’s no better…Worse, I daresay.

Vile matter, she is. Devil’s hole…

That word. It’s never far away. I know its weight, and the mouth’s shape when it says it. I know how folk spit with it, throw stones, hiss or grapple at me. They cross themselves and lock their doors, and cry
witch! Witch!
Like I am the plague or worse than it. Like my simple passing-by is a curse upon them, a danger, a proper woe in their lives. Like I am not a person—no feelings, no heart. No dreams in me.

Witch…
I have tried to not mind it. I’ve tried so hard.

I have tried to say
it does not hurt,
and smile. And maybe I can reason that
witch
has been a gift, in its way—or look at my life…Look at the beauty that
witch
has brought me to. Such pink-sky dawns, and waterfalls, and long, grey beaches with a thundering sea, and look what people I met—what people! I’ve met some sovereign lives. I’ve met wise, giving, spirited lives which I would not have done, without
witch
. What love it showed me, too. No
witch,
and I would not have met the man who made me think
him, him, him
—all the time. Him, who tucked a strand of my hair behind my ear. Him who said
you…

Witch
did that. So maybe it’s been worth it all, in the end.

I
WAIT
for my death. I think
him,
and wonder how many days I have left to think it in. I turn my hands over, and stare. I feel my bones under my skin—my shins, my little hips—and wonder what will happen to them when I’m gone.

There are one or two, maybe. Like Alasdair. Like his brother, who never quite trusted me, for I was English-sounding, and strange-looking. I had my lonesome ways.

And Gormshuil. She’ll remember me. What a mind she had, tucked inside that hairless skull—what sight, what knowing…
Blood comes,
she said to me.
A man will find you. A man will come to you, and see your iron wrists, your small feet.
What were those words? I brushed them away, as she said them. I thought it was henbane talking, or some half-had dream of hers.

But blood was spilled, in Glencoe, like she said. Blood did come.

A
MAN
will find you.

I hear these words, now.

A man will find you. Iron wrists.

Some things we know. We hear them, and think
I know
—like we’ve always had the knowledge waiting in ourselves. And I know. She was right. There was a light in Gormshuil when she said
iron wrists
—a wide, astonished light, as if she’d never been so sure. Like how a deer is, when it lifts its head and sees you, and is scared—for it knows you are real, and breathing, and that you’ve crouched there all this while.

S
O
I wait. With my shackles, and dirt.

I wait, and he comes. A man I’ve never met is riding to my cell.

When I tuck up in the straw, I stare into the dark and see my other lives. I see the bogs, the glen. But I also see his face.