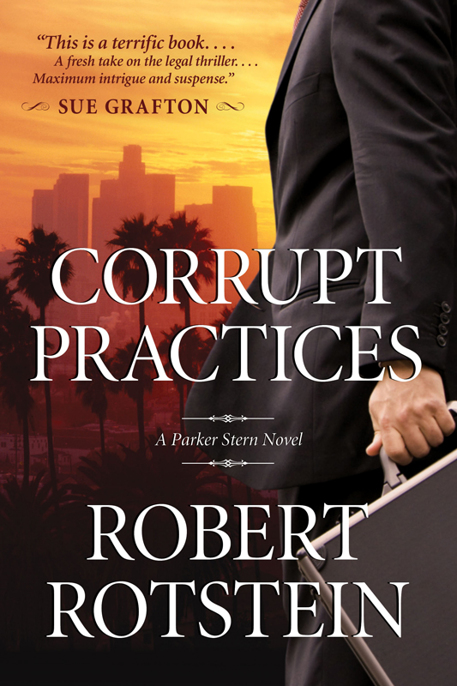 Published 2013 by Seventh Street Books™, an imprint of Prometheus Books

Corrupt Practices.
Copyright © 2013 by Robert Rotstein. All rights reserved. No part of this publication may be reproduced, stored in a retrieval system, or transmitted in any form or by any means, digital, electronic, mechanical, photocopying, recording, or otherwise, or conveyed via the Internet or a website without prior written permission of the publisher, except in the case of brief quotations embodied in critical articles and reviews.

He’d told his wife that he’d bought the Glock 22 for protection. Now, the barrel of the gun was lodged between his teeth. His heartbeat was normal, his breathing steady. His body wasn’t trembling. He’d conquered the legal profession—which to him meant that he’d conquered the world—by mastering the art of calm.

Even now he was thinking, not about his family, but about his law firm. The firm had always come before everything else. It bore his name and appealed to his paternal pride. It gratified his desires. Only during the last two weeks had he realized how poorly he’d served it.

One of his favorite aphorisms was “hubris kills more legal careers than greed and stupidity combined.” He’d drummed it into the young lawyers, but hadn’t heeded his own words. He’d infused the firm with a virus, believing that he could control its spread. His mistake was unforgivable.

When he heard the
click
, he tried not to gag on metal and fear. There was no longer any point in resisting. This morning’s news had reported that the Malibu surf would be particularly dangerous today, bringing powerful riptides that could sweep the strongest swimmer out to sea. The last sound ever to penetrate his consciousness was the crash of an all-consuming wave.

I haven’t set foot in a courtroom for eighteen months. I’ve altered my lifestyle, I tell everyone. I’ve decided to get out of the pressure cooker of trial work and start over before I turn forty. Only my two closest friends know the truth.

On this afternoon, as on most, I’m sitting alone at a back table at The Barrista Coffee House in West Hollywood sipping a macchiato and reading a book about the law. This one is a biography called
Defender of the Damned
, about famed LA trial lawyer Gladys Towles Root. Root represented mostly murderers and sexual predators because during the forties and fifties no one else would hire a woman. A flamboyant dresser, she was such a skilled advocate that the convicts composed a ditty about her:
Root de toot. Root de toot. Here’s to Gladys Towles Root. Her dresses are purple, her hats are wide, she’ll get you one instead of five.

Deanna Poulos comes out from the back and bops over to my table. She owns The Barrista, so named because she was a lawyer herself, one of my partners at Macklin & Cherry. Not so long ago, she wore pinstripe suits with pencil skirts to work. Now she dresses in black tee shirts and jeggings, and her left arm is half-covered with tattoos. When the firm fell apart, she quit the practice of law and opened her store on Melrose. Everyone told her she was making a huge mistake. But the shop has thrived despite the bleak economy and the cutthroat competition from the chains. I admire her bravery; I envy her freedom; I think she’s gone crazy.

“Waz up, Parker?” When she speaks, a silver tongue bar is visible. She touches my cheek, and then playfully pats me on the shoulder in a way that makes the gesture seem less intimate. She glances around as if she doesn’t want anyone to overhear, although there’s no one around. I think I know what’s coming—a story about an ex-colleague’s upcoming divorce or latest affair or professional misstep.

“Rich Baxter’s in jail,” she whispers.

Just because Deanna says it doesn’t make it so. This kind of slander flares up all the time, the spontaneous combustion of volatile nouns and verbs.

“Where did you hear this?”

“From him. He called me from the jail.”

I was going to take a sip of coffee, but my arm freezes in midair. I set the cup back down on the table so I don’t spill.

“The FBI arrested him five days ago,” she says. “They’re holding him for money laundering and fraud. The Church of the Sanctified Assembly has accused him of embezzlement.”

“Rich wouldn’t rip off a client, much less his own church. Hell, that guy wouldn’t overstay his welcome at a parking meter.”

She hesitates. “He actually called me because he wants to hire you as his lawyer. He didn’t think you’d take his call.”

“Is this your idea of a joke?”

She shakes her head.

“We haven’t spoken in years. Why would he possibly want me? ”

“Because you’re the best.”

“Once, maybe. Not anymore.”

“No one enjoys fighting the Assembly. They always make you pay for it.”

“It’s time for you to get back in the game. To show some guts.”

“It’s not about courage.”

Her words sting. Before I can reply, she gets up and goes back into her office. With her short bottle-black hair, slender body, and swaggering gait, from the back she resembles a rebellious adolescent boy.

This is how it started: I was down at the old Van Nuys courthouse on a simple discovery dispute over a confidential e-mail. Moments before the judge was to take the bench, my cell phone buzzed. I still don’t know why I answered the call. It was my partner, Manny Mason. He sucked in air, almost a gasp. “Harmon Cherry’s dead. There’s an emergency partnership meeting at five thirty. Parker, Harmon shot himself.” He started sobbing.

I tried to speak—to ask how it happened, to swear at him, to call him a liar, anything—but I couldn’t find words. Then the door leading from the judge’s chambers swung open, and the judge walked into the courtroom. I hung up on Manny without saying goodbye.

When the clerk called my case, I stood up, determined to muddle through the hearing despite the odd detachment I was feeling. Harmon used to preach that sometimes the ability to muddle through is a lawyer’s greatest asset.

The opposing counsel entered her appearance. When I tried to enter mine—all I had to say was “Parker Stern for the defendant”—my voice caught and my vocal cords felt raw and swollen. The courtroom walls elongated, and the judge’s bench became a shimmering mirage. Then my cheeks flushed hot and my stomach leapt up and pressed against my throat. I croaked, “Sorry, Judge” and sprinted out of the courtroom and down the hall to the men’s room, where I found an empty stall and vomited. When I finished, I went to the sink and rinsed my mouth out with cold water. Thank God the episode was over. Embarrassing, but the embarrassment would go away as soon as I won my motion. “Victory is the strongest palliative,” Harmon would say.

When I returned to the courtroom, the judge was waiting for me. She told me to proceed with my argument, but when I tried to speak, the nausea returned. And then I heard a high-pitched whirr, like a child’s humming top. My knees buckled. I groped at the lectern for support, but my flailing arm pulled it down with me, and I tumbled to the floor
.

The shrinks call it
situational glossophobia
, a fancy name for stage fright. I’ve tried everything—psychotherapy, yoga, meditation, biofeedback, Valium, Xanax. Nothing works. Deanna wouldn’t think of telling someone with a bum knee to suck it up and start running, or of admonishing an addict to show some willpower, but now she’s called me a coward.

One of the baristas brings me a fresh macchiato, even though I didn’t order one. I really am a fixture in this place.

A little while later, Deanna comes back to my table. “Listen to me, Parker. Rich needs a lawyer. If nothing else, you should do it out of loyalty.”

“Loyalty? Where’s his loyalty? He bailed on his partners only weeks after Harmon died, took the firm’s biggest client with him, and stood by while rest of us split apart. Meanwhile, he’s made millions off the Assembly. As much as I hate that damn cult, the legal fees could have kept the firm afloat. Not to mention that if he did commit this crime, he betrayed his family and client and church.”

“All the more reason why you should help him. Remember what Harmon used to tell us? Loyalty is most meaningful when its object has betrayed you.”

“Maybe so. But it’s what Harmon believed.”

She turns and glances at me over her shoulder, her smile knowing and flirtatious, her dark brown eyes dancing like they always do when she knows she’s won an argument. “When you see Rich, tell him I said to keep fighting.”

I park at the lot on the corner of Temple and Alameda and walk toward the Metropolitan Detention Center, a nondescript high rise located near the federal courthouse and Union Station. For the first time in over a year, I’m wearing a suit. It’s mid-October. The downtown air is fresh for once, the sky a pristine aqua. The sun gleams off the polished walls of the skyscrapers. Even the maple leaves, which usually turn from green to a brittle brown without bothering with the fiery in-between colors, are a vibrant yellow. All in all, it’s much too nice a morning to be visiting a jail.

How Firm a Foundation by David Weber
Briar Blackwood's Grimmest of Fairytales by Roderick, Timothy
The Glass Sentence (The Mapmakers Trilogy) by Grove, S. E.
A Billionaire's Obsession 2 (BWWM Interracial Romance): His Urges by Hattie Black
Just One Bite by Barbara Elsborg
The Inquisitives [4] The Darkwood Mask by Jeff LaSala
The Pale Blue Eye: A Novel by Louis Bayard
Moonlight on the Magic Flute: A Merlin Mission by Mary Pope Osborne
Spanked by the Vet by Christa Wick
Lyon's Gift by Tanya Anne Crosby
Our partner