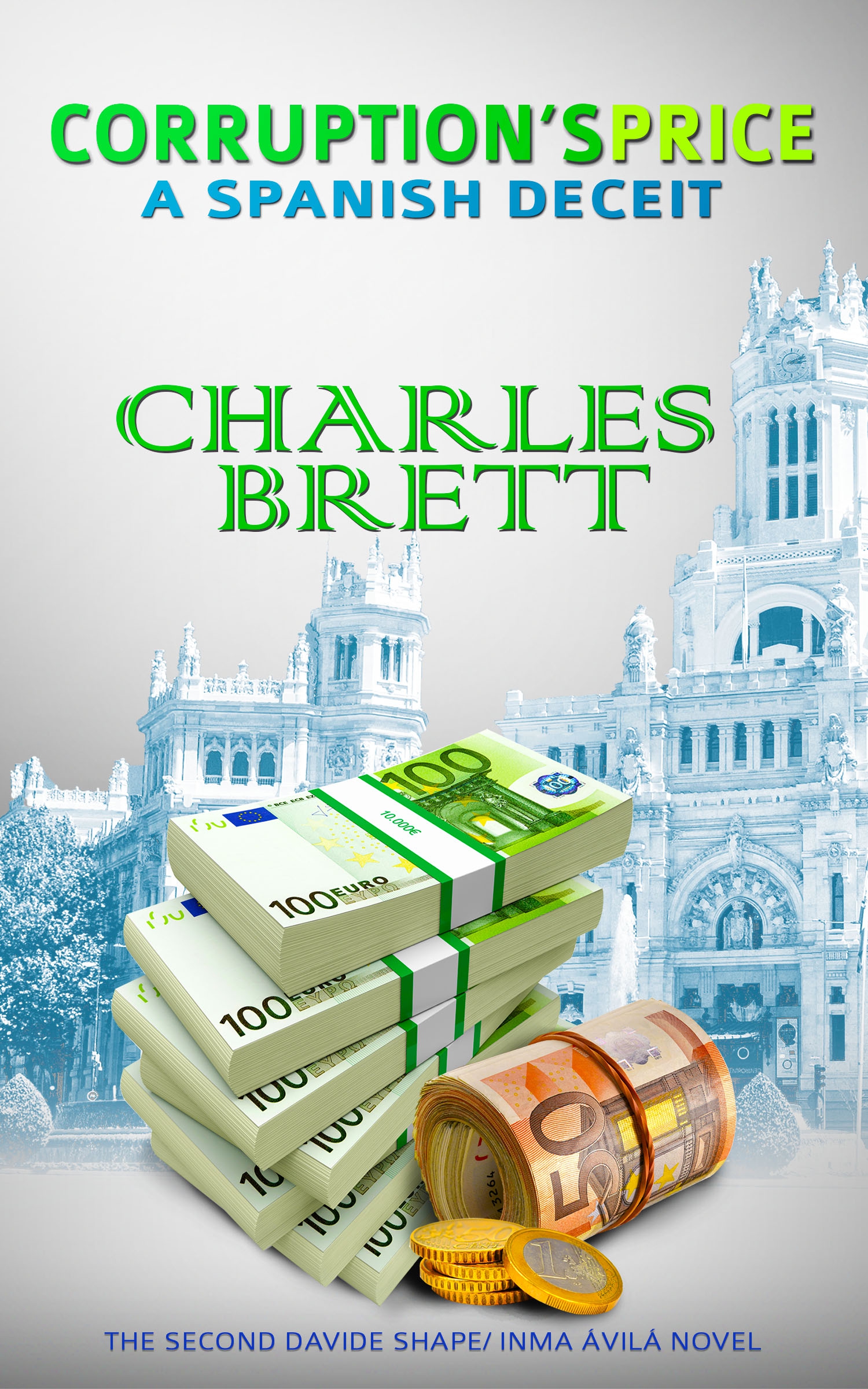 This ebook was first published in 2015

The right of Charles Brett to be identified as author of this work has been asserted in accordance with Section 77 of the Copyright, Designs and Patents Act 1988.

This book is copyright material and must not be copied, reproduced, transferred,

distributed, leased, licensed or publicly performed or used in any way except as specifically permitted in writing by the publishers, as allowed under the terms and conditions under which it was purchased or as strictly permitted by applicable copyright law. Any unauthorised distribution or use of this text may be a direct infringement of the author's and publisher's rights, and those responsible may be liable in law accordingly.

My thanks for help with this novel go to Adelita, Clara, Eric, Ian, Karen, Marta, Salvador, Una and Lourdes for reading early versions and giving me valued feedback. José María and Begoña were kind enough to offer input on the legal dimension. Lourdes and Salvador corrected my mistakes in Spanish and about Spain.

Most of all I must 'thank' all those Spanish politicians (and their like) who have provided, and seemingly will continue to provide, the base material for this novel -- and who simultaneously made the writing infinitely harder. Just as I thought that I had pushed my concepts of corruption to their credible limits I would pick up
El País
or
El Mundo
to discover their rapaciousness and duplicity know even fewer bounds and exist to an extent that exceeded my worst imagination.

All flaws, idiocies and errors are of my own making.

Marta put her head in her hands. Sitting in a smart, modern office in the old city centre of Valencia she thought: "Not another."

She considered the five other identical envelopes lying within a folder on her desk. The details in each were different, but the message was the same. Outwardly each was an innocent standard letter sent by the same company outside Madrid. They seemed banal, merely requests for the return of payments made twice or for refunding credits held within six different organisations. But at each of these six she was a special financial adviser. Worse, the amounts mentioned gave her specific cause for concern. Not only were the cumulative amounts substantial but each was like a bright red coal she knew was too hot to handle. Any one could ruin her.

The trouble was she recognised the amounts. She knew too much. Therein existed the potential to unravel a cat's cradle of systematic dis-ingenuity she had arranged for over a decade. Except that any unravelled results would not produce the harmless pleasure of an enjoyable toy puzzle or a ball of wool. Rather they could reveal the messy links which existed between business and the state politic in Spain. Yes, she reflected, the issues were as big as that.

When the first letter had arrived she had thought it odd. When the second appeared it seemed like an unfortunate coincidence. With the sixth there was no doubt that someone knew something. Was it specifically targeted at her? She thought not. She hoped not. She prayed not. After all, the letters were not addressed to her personally, but to each of the six businesses who were her major clients.

She pondered further before deciding what to do.

First she must find out more about the source of the letters. Its name was cumbersome and it was curious that it was in English, not Spanish. That might be good, or bad. She put a call through to her long-suffering though handsomely-paid assistant.

"Beata. Will you see what you can find out about a business called 'OverPayment Recovery Services SL'? It's located in Alcobendas, just outside Madrid.
Gracias
. Oh, by the way, I probably won't be back until about 7 this afternoon."

Second, as it was almost 2 o'clock, she was going to enjoy a long-anticipated lunch with her ... Mentally she stopped. If a man had a mistress did it mean that her equivalent was a mister? She didn't dwell on this but instead let herself contemplate not only the meal to come but also the feast she'd enjoy afterwards. It was such a pity that her placid husband was so unimaginative and had proved most unwilling to learn what might have encouraged them both. Instead, as with pretty much everything else she had ever wanted, she had found her own discreet way to satisfy her desires.

Yet that flexibility and urgency was exactly why she was potentially in so much trouble.

"Oh well. I might as well make the most of what's there while it's available," she muttered
sotto voce
as she stood to leave.

Davide was in a large apartment in Malasaña, one belonging to his mother's favourite and youngest brother. After retiring as a leading lawyer
tío
Toño lived most of the year in southern Spain in the resort town of Marbella, famed for good living and made popular by a long-dead Saudi King who had spent summers in the cool by the coast. Summers in Andalucía are hot but compared to the equivalents prevailing in Riyadh, or elsewhere in the Saudi Kingdom, Marbella seems balmy and cool.
Tío
Toño preferred it to Madrid.

The apartment was enormous, with a large
salon-comedor
and five bedrooms with their own bathrooms. Best of all, for Davide, was the access from the
salon
to a decent-sized
terraza
with views out over Madrid as well as comfortable chairs and an outdoor table to work or eat at. Though
tío
Toño had invited Davide to use his bedroom, Davide had declined, having instead moved into the main guest room. The one change he had made was to take over the smallest bedroom, which was now his study-cum-office.

That still left Davide with more than enough space for one person, especially with
tío
Toño's
chica
, Ángela from Ecuador, coming most days to clean, iron and generally mother whomever was in the apartment. In practice Ángela adored having Davide there. Her alternative was presiding over a perfectly polished palace that was used only for days in a year on
tío
Toño's occasional appearances. Irrespective, he paid her well. In Spain's time of financial crisis, or '
la crisis
' as the newspapers referred to it, Ángela was grateful just to have a job. It was even better, however, to have someone to focus on.

Davide paced, up and down, down and up. He was uncertain. All he was sure of was that he needed help. Disagreeably the most logical person was far, far away – both geographically and otherwise.

He pictured Caterina Certaldo. They had met when they were both working for Nelson da Ferraz, the Brazilian cardinal responsible for the HolyPhone. Together with Conor – Davide's friend and Caterina's then boss at Interpol – the three had successfully defeated a particularly pernicious financial scam being perpetrated upon the Roman Catholic Church. By the time the meat of the investigation work was complete Davide could barely stand Caterina. While she was exceptionally capable she could be obnoxious, and almost whine – a disagreeable combination in anyone, even an Australian as good-looking as she.

Their primary task finished and with the miscreants identified, as well as how they were diverting money from the Church, she had shocked him late one evening after he had received generous recompense from the Vatican for his success. She had made him two propositions. The first was to join him in his business. The second to jump into his bed (she had actually been even more direct in her offer).

He recalled his instinctive caution. He had suggested doing nothing precipitate but instead decided to observe how things progressed. Maybe that had been his error. If they had hopped straight between the sheets, would the problems have gone away? He could not be sure but he did know it wasn't his style. Instead they had left for a long weekend together to visit her namesake village of Certaldo in Tuscany, though staying in separate hotel rooms. Through Friday and Saturday all seemed to go well, at least to him, with increasing mutual interest. Yet on Sunday evening ... nothing.

He had come down to dinner on their last day in Certaldo expecting later to honour her earlier proposition. Unexpectedly, she had turned professional and cold, interested only in working with him on the second six-month phase of the HolyPhone project – making sure it was as secure as was conceivable for the long-term.

Even that had not lasted. After four months of intense commitment she had appeared one day to tell him that her part of the work was finished, which was essentially true, even if his was not. She had startled him, first by saying she was booked on the next day's flight home to Sydney, and second by asking if he was joining her.

He had been sorely tempted, having grown beyond respecting her technology abilities where she was a near genius in his estimation. She could be extremely good company, if she relaxed. Yet he knew that she knew that he would have to finish the project. To Davide this was the giveaway. Her's was not a real invitation.

Yet the expression of regret on her face when he declined still made him wonder if he had misunderstood. With Caterina this was always possible. In many ways so brilliant, she could be maddeningly stupid or obtuse, even both at the same time.

Nevertheless, he needed someone with her analytical skills again. Should he or shouldn't he make contact? That was the dilemma he'd been wrestling with for over a week.

He slid his tablet towards him, entered his email and sent a simple message: "Currently in Madrid. Need you. Please come. Davide."

He pressed 'Send' before he could rethink ... and the email was gone. Only later, after climbing into
tío
Toño's ample spare bed, did it occur to him that his words were ambiguous.

Caterina woke up with a nasty hangover from the long evening before with Emilia. Even now, after knowing each other for well over a decade, she was never wholly sure if Emilia should be counted as colleague or as a best friend. They had met when studying together and had been in and out of each other's lives ever since.

Yet they lived very differently. Where Caterina regarded herself as cerebral, thoughtful and restrained, Emilia was a bundle of energy with short-lived enthusiasms, especially for boys or girls younger than herself, preferably in their twenties.