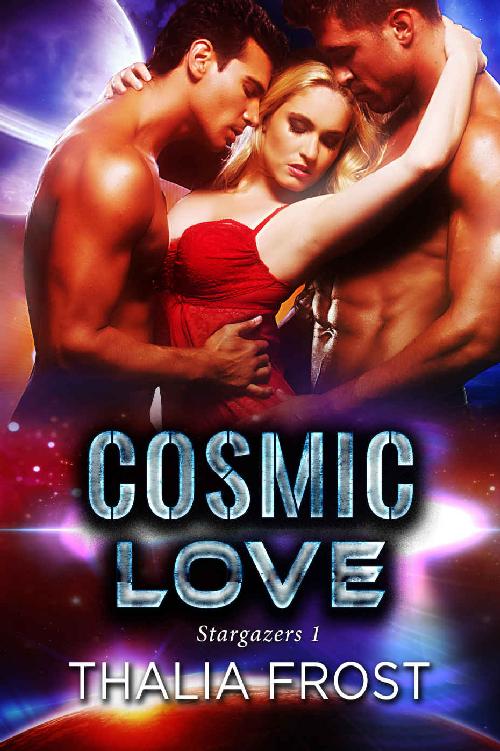 Gina looked up at the blazing sun in a bland New Mexico sky. “It's going to be a scorcher here.” She pulled up to a security gate, her palms sweating—not just from the heat.

“Hello, Miss. We need to see some ID before you can get in to the facility.” The young man didn't crack a smile.

“Sure. I'm new here, but these are the clearance papers they gave me.” She cleared her throat, making a mess of the stack of documents as she fished them out and passed them through the open car window.

The serious man scanned each document, taking his time. Sweat beaded on the steering wheel where Gina gripped it too tightly. “Alright, Dr. Forester. Everything looks fine. You'll be heading in to Building A where you will meet Dr. Crosset and the team.”

The facilities struck awe into Gina's soul. The labs sprawled out over the desert, and the observatory rose up like a rounded beacon in the hazy, blue sky.

The view was almost enough to make her forget John.

“Ugh,” she whispered, fighting visions of his smiling face.

Why am I doing this? It had better be worth it—this fresh start I'm hoping for and the making of my career.

For this top secret position as a physicist working for the U. S. government, she had given up the only man she had ever loved. The life of a female physicist in research was anything but cocktails and romance, but John Rawlings had been fine with that—as long as she came home to him after the long nights at the lab while she had been working on her doctoral thesis.

But moving here had been too much.

“The desert? Thousands of miles away? I'm sorry, babe, but I just started at the university. I thought we were going to make a life here.”

She would never forget the shock and sadness on his face. When Gina had suggested a long distance relationship, John hadn't even considered it. “I won't do well with that. I have to have you...someone...nearby.”

And those words had sealed it.

Sayonara, baby. I'm not just someone.

He'd moved out of her place the next day after living there for three years. Gina had found herself single again at 32.

Gina parked in front of Building A and check her makeup. Not that anyone would notice, but it never hurt to try. She got out of the car and smoothed her skirt.

The older lady working at the reception desk gave her a warm smile. “You must be Dr. Forester!”

“This way, please. Dr. Crossett has an hour blocked out in his schedule to show you around and let you meet the team.” The woman pushed a button. “Dr. Forester is here to see you, Dr.”

“Great. Send her back and bring a tray for us, please.”

Gina licked her lips, hoping her hair didn't look too wilted. As if most physicists cared.

Gina had found men in her profession to be less than appreciative of women in the lab, let alone notice attractive women. They were too busy with particles and the wonders of the universe to be too interested. She had never even dated another physicist. John was a professor of English.

The thought flew out of her head when Ellen—as her button read—opened Dr. Ford Crossett's door.

Dr. Crossett wore a crisp white lab coat. Straight, long blonde hair spilled down his cheeks, and eyes as green as a four leaf clover fastened on her.

What a hunk. Do they all look like this here?

Gina melted into the chair in the plush office. Shiny plaques hung on the wall behind the hunky physicist.

She crossed her legs, aware of the tingle between them.

“Were you informed about what you'd be working on?” Ford Crossett gazed intently at her, and the tingle turned to a throb.

Dammit. I have to keep my mind on the job.

“No, not at all. I applied because the position looked intriguing, and it's all about practicing in my field.”

Ford grinned at her. “It is and it's not. Tell me, Dr. Forester, do you believe in aliens?”

Her head was still reeling as Dr. Crossett escorted her from his office. His arm brushed hers as he opened the door.

“Aliens? Really?” Gina wanted to laugh, but she held her mirth in check.

“Really. And call me Ford. We're all on a first name basis here.”

“Okay, then call me Gina.” She bit her lip as heat rose in her face.

“We've found a signal that doesn't make any sense, and we're going to find out what it means.” Ford strode ahead of her, his pace so fast that she almost had to run.

“It's a top priority of the government right now. Here are our facilities—or at least the lab you'll be working in. I do have to tell you one thing.” Ford paused, his hand on the door.

“Yes?” Her panties were soaked now, just looking at the man.

“You're the only woman here, other than Ellen Reed, the receptionist. We send most of our data off to another building on the premises, but those folks work a few hours a week and come and go as they please. We never run into them.”

Great response.
Gina didn't know what to say. She could only hope that all of the other physicists didn't look like Ford Crossett.

He gave her a knowing look as the door swung open.

Sweet Simon. Am I that obvious?

Three heads swiveled in her direction, and Gina let out a sigh before she could stop herself.

Did they only pick the best looking scientists in America for this place or what?

Ford let her to the first scientist, seated at a computer. “This is Dr. Rock Land. He's the quiet one of the bunch, but he knows his stuff. He studied at MIT.”

Rock Land turned to her, a frown between his eyebrows. “Hi. And you are?”

“Nice to meet you, Gina.” A smile played about his sensuous lips. He had the darkest brown eyes she had ever seen, and a mop of curly dark hair to match.

“And Dr. Pax Campbell—our expert in equations of all kinds.”

Dr. Campbell was scribbling in a notebook and looked up.

He had a shaved head and icy blue eyes, but it was his smile that won the prize—gleaming and huge. “Welcome, welcome, Gina.”

The man stood before lab equipment. He was tall with a chiseled jaw and a short haircut. His hair shined blue-black under the lights.

“Hello, Gina. Nice to have you here.” He licked his lips.

Gina flushed down to her toes.

“Now you see why he's a rogue. He does things his way. Damn the consequences.”

Sounds good to me.

“Now let me show you your office and where you'll be living while you're here. We all have a building that we share together.”

Great. Sleeping under the same roof with these four insanely good looking men every night?

At the end of the short tour, Gina was exhausted but revved up. Every bit of her tingled all over.

“Have any questions? I should leave you to unpack. Your stuff made it here yesterday, and housekeeping will get your other bags out of your car. You can cook at your place, and there's one common eatery here—just for us.” Ford smiled. “We had your fridge stocked before you came.”

“Great! I can't think of anything else to ask at this point.”

“Good. You will, and we're happy to answer. Ford saluted her. “Report at 8 a.m. Sharp tomorrow. We eat breakfast together in the common area outside the lab and go over plans for the day then.”

“Right. Thank you. I'll see you tomorrow—if not before then.”

“Welcome to the team, Gina.” Ford put a reassuring hand on her upper arm, and fire sizzled through her.

She spent the rest of the day unpacking and organizing her place. It had one bedroom, a generous kitchen area, bathroom, and office. Not too shabby. The modern art décor with generous splashes of red suited her, too.

By the time she opened the refrigerator to scavenge for dinner, her stomach was rumbling. The makings of an omelet with toast appealed to her, so she got to work, watching the sun going down outside her window. It set the desert on fire in purple and pink.

Gina had just settled in with a cup of hot tea when a knock on her door made her jump. The halls had been quiet, and she had almost forgotten about her hunky neighbors.

Gina tried to straighten her hair and wished she had reapplied just a little makeup. At least she didn't have her pjs on yet. She had come close to changing a few minutes before.

An image of the roguish man slid into her mind.

This is just a normal, neighborly visit.

She opened the door, her palms slippery.

Larch leaned against the doorjamb, a bottle of red wine in one hand. “Mind if I come in? I'm the self-appointed welcome wagon tonight.” He winked.

“If you have wine, then sure.” Gina opened the door wide. The hall was silent.

I wonder if anyone else knows he was coming. Was this a planned thing—just a nice greeting?

She hoped it was more.

“Of course I do. You like red wine? If not, I can go grab something else.” He raised a well-shaped brow as Gina admired his solid build.

“Oh.” Heat rose in Gina's cheeks. “Take over. I still don't know where everything is.”

His loaded comment elicited a nervous giggle from her.

“So, Dr. I read your CV, but what really makes you tick—other than physics, of course?” Larch found a corkscrew and began working on the bottle.

“Sure you do. What else do you like to do besides work unsolvable equations?” Larch poured the blood red fluid into two glasses. He wasn't stingy with the amounts.

“You'll like it here, then. Good hiking and plenty of reading time and quiet.” Larch brought two glasses over, and they both sat down on the couch. Gina made sure to put over a foot between the two of them. She didn't want to give the wrong impression right off the bat.

“But I want to know why you're really here. It's lonely and secluded. We can't leave due to the security restrictions. Are you ready for that?” Larch's gaze narrowed.

“I think so. I could use the time to think.”

“I see.” He sighed. “It's not really my thing. I've been here for two months already, and I could use a party or a night at a bar. But, hey. We have wine.”

“Yes, we do. What's your story?” Gina noticed he had finished his glass and was pouring another.

“Bad previous job with an asshole boss. The usual in research. This looked like a way out, so I took it.” He settled in beside her, topping off her glass.

Gina's head was already fuzzy. She didn't have much of a tolerance.

“Are you trying to get me drunk?” She giggled.

“Maybe. Definitely.” He grinned, and moved closer to her. His leg pressed against hers, and she was conscious of her thin pantyhose. “I do need to tell you that dating your co-workers isn't off limits here. We just can't let it get in the way of our work.”

Lori Wilde - There Goes The Bride by Unknown
Secrets Dispelled by Raven McAllan
Right Place, Wrong Time by Judith Arnold
It's a Match! by Zoë Marshall
Pieces of Dreams by Jennifer Blake
More Than Love Letters by Rosy Thornton
To Love a Man by Carolyn Faulkner
Love Gone Wild: A Contemporary Romantic Comedy by Michele Bardsley
Generations 2.7 kindle by Folkman, Lori
To Your Scattered Bodies Go by Philip Jose Farmer
Our partner