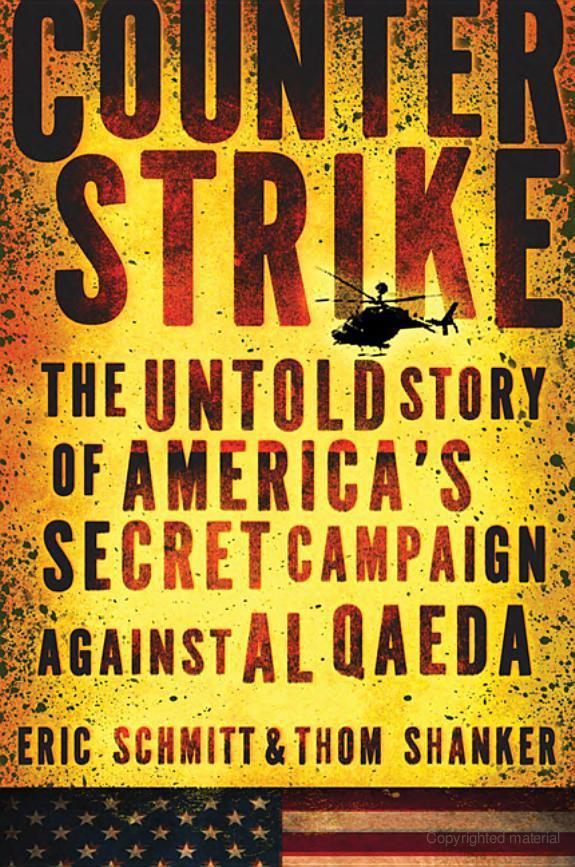 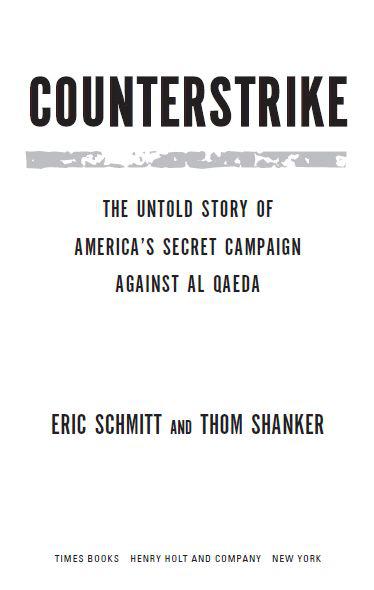 To Mom and Dad, for providing so many opportunities; To Felice, for all your loving support; And to Talia and Alexa, follow your dreams!

To Shirley and Ben, who set me on the right path; To the lovely Lisa G., on the journey with me every day; And to Sam and Daniel, onward, with your father’s blessing!

Prologue: In the Beginning …

3. The Exploitation of Intelligence

4. The Problem of Pakistan

8. The Rise of Home-Grown Extremism

Epilogue: “Tell Me How This Ends”

One of the lamentable principles of human productivity is that it is easier to destroy than to create.

Nearly a decade of frustration, false hopes, and faulty leads had come to an end. A thirty-eight-minute raid by a secret Navy assault team dropping into a walled, three-story compound in Abbottabad, Pakistan, marked the culmination of months of painstaking intelligence work, military planning, and political risk assessment.

“Justice has been done,” President Barack Obama declared to the world on May 1, 2011. Osama bin Laden was dead.

The mission that successfully took Al Qaeda’s founder forever off the battlefield would not have been possible for the American government to organize and execute in the years immediately after the terror attacks of September 11, 2001. The national security bureaucracy was divided, almost tribal. Information on threats was hoarded by individual departments and agencies; planning was walled off. Surveillance technologies that supplied details critical for the bin Laden raid were just being tested or did not even exist. The military resisted incursions into its missions by the intelligence community. The spies didn’t trust the soldiers. Members of the nation’s most highly trained counterterrorism and hostage-rescue units could go their entire careers and never deploy on a real mission. Now, these teams carry out dozens of strikes and counterstrikes every night in places like Afghanistan and Iraq, with commandos and intelligence analysts teamed up throughout the operations. It once would have been unthinkable, but the raid by the Pentagon’s top-tier force of commandos that killed bin Laden was under the overall command of the CIA director.

But it was more than just bigger and better tools, more than just hard-learned experience. The campaign against violent, religious extremism has required the United States to develop a new mind-set, including new principles, new doctrines, and even a new strategy to guide America’s counterterrorism campaign. On 9/11, there was no playbook comparable to the doctrine of containment and the strategy of deterrence that characterized the long, cold war against the Communist threat. And it took years after 9/11 for policy makers to understand that the key to divining this new way forward would require them to reach back in time to the old lines of thought on how to protect America from its global enemies.

He is the last of them.

Tom Schelling is the last of the founding fathers of deterrence, the final survivor of an elite circle of strategic analysts and game-theory economists who pondered the impenetrable, planned for the horrific, dreamed up the nightmare scenarios, and plotted how nuclear weapons could kill millions, all in the hope that this very threat would prevent it from ever happening. The other cardinals of Cold War deterrence have passed: Bernard Brodie, Herman Kahn, Klaus Knorr, Albert Wohlstetter. Schelling is the last of them.

He already was eighty years old when terrorists converted a quartet of passenger airliners into cruise missiles for the September 11, 2001, attacks on New York City and Washington. In the aftermath of America’s second Pearl Harbor, Schelling began pondering whether an updated system of coercion and inducement might be found to influence the behavior of a new generation of adversaries. Deterrence strategies had kept a tense nuclear peace with the Communist leadership of the Kremlin for more than four grim decades of the Cold War. Might they not offer guidance for how America could protect itself and its allies during this long war against violent religious extremists?

As the tenth anniversary of the 9/11 attacks approached, and as Schelling prepared to enter his tenth decade of life, he also began another major effort: a complete gutting and remodeling of his kitchen. He juggled discussions of deterrence and the installation of drywall one afternoon in his home in Bethesda, Maryland, just beyond the northwest boundary of Washington, D.C. He scurried about the construction site with puckish good humor, a sparkle in his eye, and a lilt in his speech, looking like Einstein by way of Yoda.

How does a Nobel laureate in economics rationalize a six-figure kitchen upgrade at age ninety? How does someone at that point in life amortize the experience of the remaining meals to be prepared and savored with a whopping contractor’s bill? Was this healthy optimism or simple delusion? Perhaps that is the essence of Schelling’s deterrence analysis, of his conflict-prevention strategies, on a most individual and human scale. For the professor whose essays helped inspire Stanley Kubrick to make his cinema classic
Dr. Strangelove
, it is obvious there are no guarantees. When every day is a potential Doomsday, don’t you have to try everything you possibly can to make life better?

The central problem in attempting to apply Cold War deterrence theories to the age of violent religious extremism is that terrorists hold no territory and thus hold no territory dear. They offer no large and obvious high-value targets for American attack comparable to the national treasures the Soviets knew were at risk: populous cities, critical factories, dachas of the elite, military bases, or silos protecting the Kremlin’s own nuclear force.

Then there is the question of attribution: A nuclear warhead hurled toward American soil by intercontinental ballistic missile has a return address. The attacking nation and its leaders can be identified and held responsible, and with certainty. Not so with a weapon of mass destruction smuggled into America and set off by a shadowy, stateless terrorist organization.

Finally, there are the millennial, aspirational, otherworldly goals of the jihadists. The Politburo pursued its clear self-interest, which required the survival of the Kremlin leadership. What can you threaten that will deter a suicide terrorist so obviously willing to give up his life in pursuit of holy war against the United States? This new threat may be wholly irrational, with no identifiable self-interest to which appeals can be made. Negotiations may be impossible, deterrence questionable. The future, then, holds little but a long war until one side is beaten into submission or eliminated; the only course is a fight to the death—or at least to exhaustion.

In fact, the 2002 National Security Strategy, signed by President George W. Bush one year after the September 11 attacks, stated that “traditional concepts of deterrence will not work against a terrorist enemy whose avowed tactics are wanton destruction and the targeting of innocents.” Combating terrorists, then, can be done only by picking them up or picking them off.

“I don’t believe that. I just don’t believe that,” Schelling said that day in his half-finished kitchen. “I think that there may be a lot of jihadists who are happy to immolate themselves as suicide bombers.” Schelling advocated fashioning a campaign of inducements and pressures to alter the behavior of terrorist leaders, rather than relying on a continuing effort to kill them all.

Even the Bush administration, before leaving office, acknowledged the value of combining traditional national-security thinking with an evolving, broader, and more nuanced approach to combating terrorism. It would include capture-and-kill missions, to be sure. But it would also create a broader set of policies that included increased defenses to deny terrorists certainty of success; disruption of their fund-raising, recruiting, and planning networks; campaigns to dissuade those who may support extremist ideology but who would not want to sacrifice their own lives to the cause; and, yes, even deterrence strategies to prevent an attack with weapons of mass destruction, whether nuclear, radiological, biological, or chemical.

“A new deterrence calculus combines the need to deter terrorists and supporters from contemplating a WMD [weapons of mass destruction] attack and, failing that, to dissuade them from actually conducting an attack,” the Bush administration wrote in its 2006 National Strategy for Combating Terrorism, just four years after declaring that deterrence “will not work.”

In applying the term
deterrence
to counterterrorism policy, had the administration found a new strategy or just a new slogan? Deterrence in the strictest Cold War sense refers to the idea that you induce, even compel, an adversary not to do something by credibly threatening terrible pain and suffering in retaliation. From the beginning, American officials conceded that their evolving strategy included a more elastic set of concepts, in particular deterrence by denial (of the opportunity to attack) and deterrence by disruption as well as deterrence by punishment. As the debate spread across the government and military, some national security experts sought to create something new by recapturing the concept’s meaning from an older literature of criminal law. Criminal deterrence puts cops on the street and bars over windows—and prisons in our communities—to force potential lawbreakers to weigh costs and benefits before deciding whether or not to engage in illegal activity. When we lock up a bad guy, we are preventing him from committing more crimes, with the added benefit of perhaps deterring others from the same actions.

President Barack Obama, who inherited a Bush administration counterterrorism strategy that was still evolving, moved rapidly to put his own imprint on a still-maturing policy. “The single biggest threat to U.S. security, short-term, medium-term and long-term, would be the possibility of a terrorist organization obtaining a nuclear weapon,” he told world leaders in the spring of 2010 at a summit he convened in Washington to discuss exactly this threat. The president expressed certainty that Al Qaeda’s leadership was unwavering in “trying to secure a nuclear weapon—a weapon of mass destruction that they have no compunction at using.”

There are no guarantees. That’s why the United States during the Cold War spent hundreds of billions of dollars to research, develop, test, and deploy a nuclear arsenal of intercontinental reach and ever-increasing accuracy and destructive power even as deterrence theories became more refined and nuanced, and targeting strategies grew more complicated and precise. Show the Kremlin it had nothing to gain by nuclear war, and maybe you prevent nuclear war, argued Schelling and the other high priests of deterrence theory. And they were proved right.

Schelling argues that while all of these steps are prudent and that it is the government’s obligation to do all it can, it would nonetheless be difficult for a terrorist organization to obtain a nuclear weapon. “First, it is not easy to smuggle out of the country where it was stolen,” he said. “Second, if you wanted to buy a nuclear bomb on the black market, you’d have to recognize that nobody can tell the difference between a live bomb and a dummy. That means that if somebody shows up on the black market to buy what is alleged to be a nuclear bomb, they don’t know whether it’s a CIA agent, or a Mossad agent or a KGB agent or it could simply be an entrepreneur who makes something that looks like a bomb and says something like: ‘You know if you hit the trigger, it will explode.’” But in a world of increasing proliferation, when it is not beyond the realm of possibility that nuclear components might enter the black market from North Korea or some other rogue power, or even from an increasingly unstable ally like Pakistan, verification of the weapon’s functionality may not be a concern.

Claiming the Highlander by Kinley MacGregor
The Bone Orchard by Abigail Roux
Jessica (Tucked In 2) by Kuhn, N
Murder on the Champ de Mars by Cara Black
Resistance by Barry Lopez
Cold Eye of Heaven, The by Hickey, Christine Dwyer
Brotherhood of the Tomb by Daniel Easterman
Dangerous (The Dark Billionaire, #4) by L.N. Pearl
Siege of Stone by Williamson, Chet
Genghis Khan and the Making of the Modern World by Jack Weatherford
Our partner