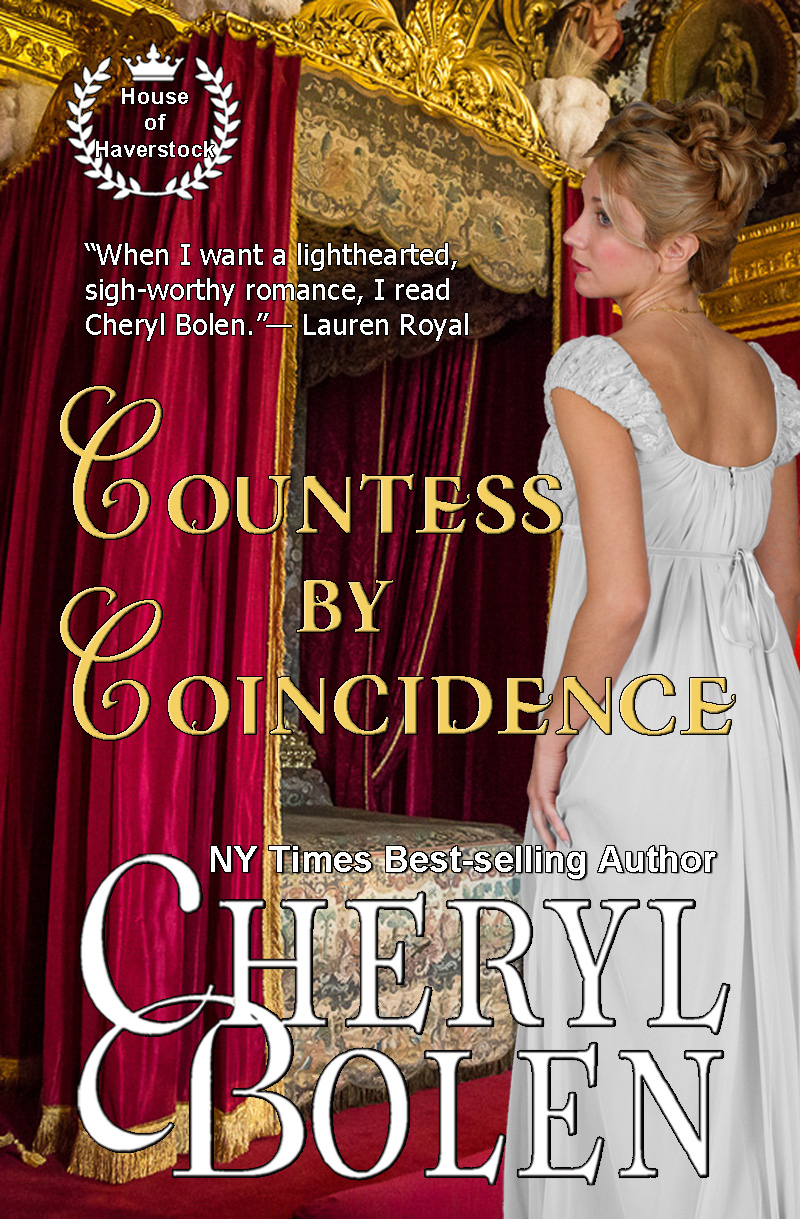 The Brides of Bath Series

To Take This Lord*

Love In The Library*

A Christmas in Bath*

With His Lady's Assistance*

A Most Discreet Inquiry*

The Theft Before Christmas*

A Cry In The Night

It Had to Be You
(Previously titled
Nisei
)*

A Summer To Remember (3 American Romances)

Countess by Coincidence
is a work of fiction. Names, characters, places, and incidents are the products of the author’s imagination or are used fictitiously. Any resemblance to actual events, locales, or persons, living or dead, is entirely coincidental.

No part of this publication may be reproduced, stored or transmitted in any form or by any means without the prior written permission of the author.

For my sister Colleen, who's always there for any of us in her family. I love and appreciate you--even if you did get the name I should have had!

What a deuced pickle John Beauclerc, the 11th Earl of Finchley, had gotten himself into. The higher he climbed the stairs to his Grandmere's drawing room, the lower he felt. Had he not sworn to that dear lady a mere ten weeks previously that he would curtail his attraction to high-stakes play? Yet here he was like an errant schoolboy, preparing to once again vow that he would change his wicked ways—while begging for a few hundred quid to tide him over to the next quarter.

He needn't tell her he owed every bit of it to Lord Bastingham because of a disastrous turn of bad luck. Nor need he tell her how many tradesmen were dunning him. Nor how he'd been forced to find new positions for his groom and coachman because he lacked funds to continue keeping horses.

Before John reached the landing, he passed the Romney of his late grandfather. His step slowed as his gaze raked over the old fellow. John was certain Grandpapa's eyes had been green, but the paint had darkened over the years to a murky brown. From beneath the elderly man's prim white wig and bushy gray brows, those dark eyes seemed to be glowering at his grandson. A shudder rippled down John's spine, and he looked away.

Good Lord, even the dead must know about John's rakish ways.

A few moments later he threw open the doors to Grandmere's drawing room. Seated upon a sofa, a slant-top portable desk balanced on her lap, she was scribbling on paper, then she looked up at him with a twinkling gaze.

Though she could be an excessively stern matriarch, Grandmere had the looks of an angel. At present, her pink mouth lifted into a smile that accompanied the sparkle in her pale blue eyes. She was small and round and fair and was possessed of fluffy white hair. For as long as he could remember, her cheeks had been pink, but his mother—God rest her soul—had said Grandmere's cheek colour came from French rouge.

He strode to her, bowed, and kissed her hand. "It's good to see you, Grandmere."

He stifled a groan. Ten-year-old boys were naughty. When one was six and twenty, he was . . . well, he supposed
dissolute
described the man he'd become. "I protest. Guilty I may be to the naughtiness, but I am hardly guilty of neglecting my favorite kinsperson."

She frowned. "I am your
only
kinsperson."

"And do I not call on you at least once a week?"

"Your attentions to your grandmother may be the only admirable trait you possess."

So she had heard about the gambling. And perhaps even worse. "Can I help it if I am my father's son?"

A shadow of sorrow swept across her aged face. "My life's hope was that my grandson would be the man my son could never be."

He sighed. "I am truly sorry to be such a disappointment."

"But not sorry enough to do something to change it."

His countenance brightened. He offered her a broad smile. "I haven't been to Newmarket since the last quarter!" Perhaps he should not have referenced a Newmarket racing meeting. After all, that is where Papa had met his demise when, under the influence of vast consumption of brandy, he was trampled to death when he attempted to mount a horse during the race.

"And,” he added brightly, “My valet will verify that the number of mornings in which I awaken snoggered have been greatly reduced." Remembering his father's unfortunate end, John was being somewhat mindful of lessening his own consumption of spirits. Except, of course, when he was with his fellow bloods. One couldn't look like a jessie.

She continued to scowl. "Even your father never used such a word in my presence!"

He effected a contrite look. "Forgive me."

He would rather not. It made him feel small in the presence of his steely grandmother. He needed all six feet, two inches to gather his courage. "Actually, I cannot stay."

"So you've just come to see that I haven't died in my bed?"

His brow lowered. "I beg that you never speak of such!"

"Then, as I have suspected all along, you're seeking a loan—a loan you promise to pay back when the new quarter rolls around."

He could not meet her gaze. "You know me too well."

He had never been able to refuse her a request (except the request for his reform). He settled awkwardly upon a silken sofa across from her, fully expecting to be subjected to a long lecture on his evil ways. His eyes trained on the Aubusson carpet beneath his feet, he waited. And waited. Grandmere harrumphed but said not a word.

After a moment, he looked up. This stern look upon her face was unexpected.

"I'll not give you a farthing."

His eyes widened. Never before had she actually refused him.

"It has been nearly a decade since you left Oxford, and your habits remain those of a lad getting his first taste of wine, women, and faro!"

Every word she said was true. He still remembered the joy of leaving Oxford behind and re-opening Finchley House on Cavendish Square, of meeting with other like-minded young men at White's for brandy and faro and any other manner of betting, and . . . of the ladies! Could one ever grow tired of such pleasures?

By God, after all those years of awakening to cold stone floors at six in the morning to eat grub and face his lessons, he cherished every moment in the Capital now. He'd never been happier. He rose when he wanted, and not one night of the week was he home and idle. He and Christopher Perry, David Arlington, and Michael Knowles—chums since their Eton days—were always ready for a lark. The four of them loved the ladies, too. (Not that one would actually refer to the opera dancers and members of the demimonde precisely as
ladies
.) John had not the slightest desire to be shackled to some prim and respectable wife.

His gaze returned to the carpet. "You are—as always, Grandmere—right."

"It's time you settle down."

"Why can I not wait until I reach thirty?"

"At the rate you're going, young man, I'm afraid you won't reach thirty."

Were all women prone to such sweeping statements of gloom? 'Twas another very good reason to avoid parson's mousetrap. "I'm very happy with my life as it is." He glared up at her. "Besides, I've yet to meet the woman to whom I wish to be sha- - -, er, married."

"Of course, you haven't! You have no interest in honorable ladies. Have you even once attended the assemblies at Almack's?"

He grimaced. "Why would I wish to go to that devilishly boring place? They serve nothing stronger than tea!"

She glared at him. Grandmere, who'd always treated him with the most tender of hearts, had never
glared
at him. "My resolve is inflexible. I had hoped one day to settle the entirety of my own personal fortune on my only surviving kin, but I will not do so until you demonstrate more maturity than you have heretofore." She sighed. "It is your good fortune that my Papa did not die and will his money to me whilst your wastrel grandfather and father were alive, for they would have squandered every last penny."

'Twas such pity that the Earls of Finchley did not have a feather to fly with and were dependent on the fortune of John's maternal great grandfather, who'd been the wealthiest brewer in the British Isles. And despite what Grandmere said, John wished to God the old brewer had died whilst his son-in-law
was
alive so the money would be the property of the Earls of Finchley.

"Don't know why it's my good fortune if I can't lay hands on it," he protested like a recalcitrant lad.

"One day, when you find a wife and start your own family, you'll be thankful."

"But I've no desire for a wife and children."

Her eyes narrowed as she regarded him. "Man is not always aware of what he wants. They're creatures highly resistant to change. But I know when you do settle down, you will make a fine husband and a good father. Ever since you were a wee lad, I've seen something in you that was absent in both your father and grandfather."

His brows arched in query. "Pray, what could that be?"

As much as she loved fashion, Lady Margaret Ponsby was growing tired of the never-ending ritual of dressing and primping and attempting to display oneself to advantage in search of a husband. There were morning calls, and routs, and musicals, and assemblies, and Almack's.

She was now two and twenty and, sadly, she had not taken. Her eldest sister had been happily married for several years. Her next eldest sister was on the verge of plighting her life to the distinguished Parliamentarian, Richard Rothcomb-Smedley. And her youngest sister, Caro, had turned down eleven offers of marriage. (Everyone said she was holding out for a duke.)

It was an acknowledged fact that she and Caro looked almost like twins, but it was Caro and her brilliance and sparkle that captured the hearts of all the men they met.

Not like unfortunate Margaret, who was incapable of holding an intelligent conversation with a gentleman. It wasn't that she was stupid; she was merely excessively shy. Mama had said one of her sisters was the very same. The sole sister who never married.

Her sister-in-law, the Duchess of Aldridge, swept into Margaret's bedchamber, met her gaze with a gentle smile, and softly closed the door behind her. "Before we go to Almack's I wanted to speak to you." She came to sit on the edge of Margaret's tall tester bed. The blonde duchess was already dressed and looked radiant in an ivory frock which perfectly displayed the Aldridge diamonds.

If You Could Be Mine by Sara Farizan
Seduce Me by Miranda Forbes
A More Deserving Blackness by Wolbert, Angela
Last Leaf on the Oak Tree by Cohen, Adrianna
The Triple Agent by Joby Warrick
Sea Glass Sunrise by Donna Kauffman
The Splendour Falls by Susanna Kearsley
Cowboy Behind the Badge by Delores Fossen
Hangman Blind by Cassandra Clark
the Hunted (1977) by Leonard, Elmore
Our partner