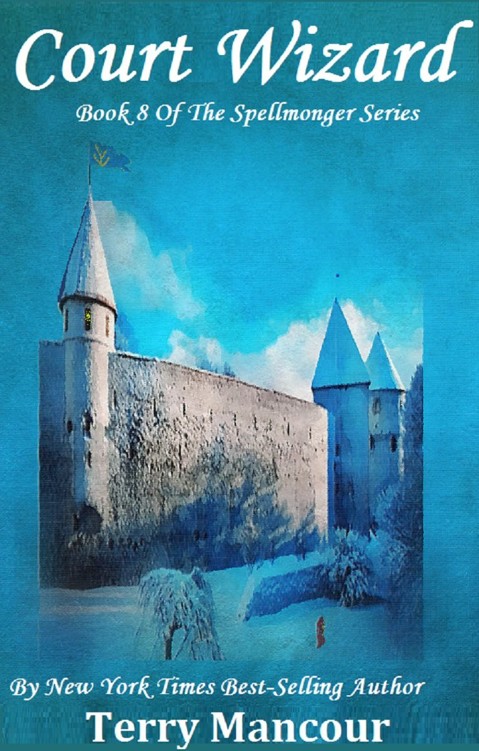 Book 8 Of The Spellmonger Series

the strongest women I know.

Old Antimei the witch coughed at the sudden rush of cold that disturbed the comfortable atmosphere of her cozy croft when her apprentice returned from the village market.  It was early in the season, yet, but already the ground was covered with snow and the streams crusted with ice.

That did not bode well, the witch knew.  It would be a harsh winter for the scattered folk of the Alshari Wilderlands, she could feel it in her old bones.  Old Antimei didn’t know how Alurra, her apprentice, was able to contend with the chill, even with a heavy cloak that was too large for her, but she seemed unconcerned by the cold. The girl was carrying a big willow basket full of supplies, which was a welcome sight.  There were still a few folk in the village who had enough to trade.  The raven on the girl’s shoulder flapped his wings and croaked a greeting to the old woman, who smiled and whistled a welcome in return.

“Sorry I was late, Antimei, but the roads are
thick
with ice!” the teenage girl said dramatically as she set the basket down on the floor and shook the snow off of her mantle.  “The bridge over the creek to Tolindir was near covered.  Why won’t they build a cover over it?” she complained.

Clearly, it was time for a lesson in wisdom.

“Who is this ‘they’ you are referring to, Alurra?” chuckled the old woman from the comfort of her chair.  Though once she was known as the Witch of the Wilderlands, the greatest hedgewitch in the north, she rarely left the chair, these days.  She knew she would remain there for some time to come.  “That rickety bridge serves to cross a creek to no one but me, now.  Who would spend the time and money to repair it in these dark days?”

“
Antimei!
” Alurra said, snorting indignantly.  “You are the greatest witch in the northlands!   They should be
honored
to help you!”

Once they were, Antimei recalled.  Once the common folk of the Wilderlands, from the Pearwoods to the Mindens, made their way to Tolindir, or Marsin, or Doss, and let it be known that they needed the Witch . . . and Antimei would mysteriously appear, as if she had known they needed the great witch’s help.  Usually, because she did.

“Again with this mysterious ‘they’!  Child, I haven’t had a
real
client in a month and a half, and won’t for another, now that the snows have set in.  Tolindir village is the last of the three I used to serve, and it is barely there, anymore.  Six families left?  Seven?  And a few freeholds? They could barely get the harvest in, let alone waste time on an old bridge to nowhere.  Is that the ‘they’ you speak of?”

“Well, then the lords should do it, then!” the teenager fumed, impatiently, as she unpacked the basket.

“The Wilderlords are
gone
, Alurra,” Antimei said, her voice becoming serious.  “There were few enough of them to begin with, before the war.  Now they’ve all died.  Or been taken.  Or fled beyond care.”

“But it’s dangerous!” she said, with all the drama a thirteen-year-old girl could produce.

“No, Sweeting, it’s a defense.  While that rickety bridge may be treacherous to human feet, it can be dashed quickly enough to keep the goblins out, at need.  They hate to get their feet wet.  And wouldn’t, for the prize of one skinny old woman and one scrawny apprentice in their soup pot.”

Alurra shuddered involuntarily.  Her parents had been taken or slain by the goblins four years ago, when their savage warrior bands burst out of the distant Mindens and pillaged their way across the Wilderlands.  That dark time still haunted the girl, and with good reason.

The Wilderlords who were pledged under Duin to defend the people had rallied bravely to the banner call.  Tolindir Village had sent twenty bowmen to the call in the party of Sire Grendei, who claimed the remote hamlet.  None had returned.  A week after their menfolk had marched away, the first wide-eyed refugees from beyond the river arrived.  They told of horrific fights against a bloodthirsty enemy, and encouraged everyone to take what they could carry and flee before they had to face the angry gurvani.

Some of the Tolindiri took heed, and left for the south or the east.  Others scoffed at the idea of the goblins even finding the tiny hamlet.  People who knew where it was had a hard time finding it, ran a local jest.

A week later, the first gurvani raiding party descended on the remote region in the night.  The hamlet of Marsin was sacked, its folk led away in chains to the west.  Doss had been burned to the ground, the folk there slaughtered.  In Tolindir village, the largest in the domain, the gurvani burned a third of the cots, enslaved sixty of the freemen, and torched the manor house when some poor folk tried to take refuge there.

That was the raid which had made Alurra an orphan – and worse.

In the horror of that fateful night the terrified little blonde girl had encountered one of the foul goblin shamans in the midst of casting some powerful spell with his accursed witchstone.  Whether her latent Talent for magic had anything to do with it or not, Antimei didn’t know – but something had gone wrong.  The flare from his spell had burned out her eyes, the faces of her parents being led away by ropes around their necks the last sight she ever saw.

Not everyone had perished or been taken that night.  The once-robust community of three hundred had dwindled to a scant hundred people who tried to carry on their lives as best they could.  When families had been torn asunder by death and despair, the brave folk of the Wilderlands consolidated their kin and their cattle and continued to live.  In fear, in tears, but they continued to plow and sow and harvest and the herds.  They looked after the orphans of their dead neighbors as if they were their own slain children.

One such mended family had taken poor Alurra in.  Only ten years old, the blind girl had been put to work in the kitchen and the yard, doing what chores a blind girl could do on a freeholding.  She’d collected eggs, swept, snapped beans, plucked chickens, scaled fish, and done laundry with increasing skill for a few years.  It was a shame, everyone said behind her back.  Such a pretty girl, and so smart and well-tempered.  But her eyesight was a handicap it would be difficult to overcome in the rough life ahead of her.

In better times they would have sent the girl south with a nun to one of the temple houses for the blind and forgotten about her.  But there were few priests walking circuits anymore, and nearly every human temple and shrine within the range of the goblins’ reach had been turned into a ghastly mockery of itself, often with the shredded, tortured remains of the former pilgrims turned into macabre mockeries of worship in their ruins.

Alurra was Tolindir Village’s problem.  The surviving villagers hoped that, perhaps in a few years, if she survived, she could be married to some poor fellow with a bigger heart than head.  Working a freehold was hard work, and it required sight; everyone knew that.  But perhaps there was a hard worker who was willing to overlook her faults.  She was a comely girl, after all.  Surely Ishi would be gracious enough to provide a good man with an unfortunate face to match her.

But then one night her fate changed again when Alurra woke in her borrowed bed, screaming, her sightless eyes streaming with tears.  She had a
dream
, she insisted, a horrible nightmare about an endless army of goblins that streamed out of the west.  Her descriptions were so vivid, so terrifying that they had brought her out of a dead sleep.  Her dream alarmed the other children instantly, and many of the adults who feared another attack on Tolindir more than anything.

Some began to murmur that the girl was possessed by some malicious spirit.  Perhaps, it was whispered, it would be better to lead her away into the forest and leave her fate to the gods.

But wiser, more compassionate heads prevailed, and Old Antimei was summoned from her hidden croft.  She was, after all, the authority on such things, and her wise judgment would appease the hearts of many. The hedgewitch was ready to make the nearly six mile walk into the village when the two lads they sent arrived, surprised to find her packed and waiting.

She’d known she was going on a trip.  She had foreseen it.

Antimei examined the girl in front of the others, as tradition demanded.  She rarely practiced that kind of magic anymore, but once learned the most basic spells always returned as strong as before.  Her arcane inquiry only confirmed her prophecy: the blind girl had
rajira
arising in her spirit, and it would be a strong Talent.  She would be of magekind – and not a minor power, either.  Though her blindness would make instructing her challenging, Antimei had a duty to train her.  There was simply no one else who could.