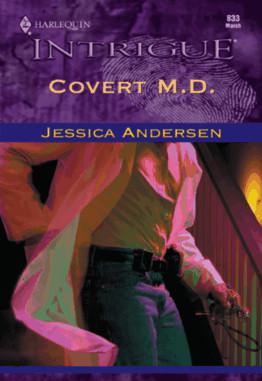 Rathe stood, uncoiling slowly from the chair as though afraid she might bolt.

But bolting was the last thing on her mind as she identified the heady, racing sensation that had pounded through her during the fight. Excitement. This was the adventure she craved, the thrill she’d been seeking.

She grinned at Rathe.

His eyes narrowing, he advanced on her and leaned down so they were face-to-face. “This is not a joke, Nia. Don’t you get it? You could’ve been killed,” he said, then placed a palm flat against the door, effectively trapping her.

“Well, I wasn’t, thanks to you. That’s why the doctors here work in teams, remember? So we can watch each other’s backs.” She shoved at his chest with both hands, but he was immovable. “Damn it, let me go!”

She saw the change in his eyes. Her body answered the call and he bent close and whispered, “I can’t.”

Then he kissed her, and all that restless energy redirected itself to the places where their bodies merged.

Spring is in the air and we have a month of fabulous books for you to curl up with as the March winds howl outside:

• Familiar is back on the prowl, in Caroline Burnes’s
Familiar Texas.
And
Rocky Mountain Maneuvers
marks the conclusion of Cassie Miles’s COLORADO CRIME CONSULTANTS trilogy.

• Definitely check out our April lineup. Debra Webb is starting THE ENFORCERS, an exciting new miniseries you won’t want to miss. Also look for a special 3-in-1 story from Rebecca York, Ann Voss Peterson and Patricia Rosemoor called
Desert Sons.

Each month, Harlequin Intrigue brings you a variety of heart-stopping romantic suspense and chilling mystery. Don’t miss a single book!

To my friends in the New England Chapter

of Romance Writers of America.

Though she’s tried out professions ranging from cleaning sea lion cages to cloning glaucoma genes, from patent law to training horses—Jessica is happiest when she’s combining all these interests with her first love: writing romances. These days she’s delighted to be writing full-time on a farm in rural Connecticut that she shares with a small menagerie and a hero named Brian. She hopes you’ll visit her at www.JessicaAndersen.com for info on upcoming books, contests and to say “hi”!

Dr. Nia French
—Nia and her first lover are partnered in a deadly hospital investigation of failed transplants. Will she learn to forgive him before it’s too late?

Dr. Rathe McKay
—The guarded doctor-adventurer has two equally difficult tasks: to protect Nia from a vicious killer and to avoid the chemistry between them.

Tony French
—Nia’s father drove Rathe off years ago. After his death, will Tony’s memory separate the onetime lovers or bring them closer together as danger escalates?

Dr. Logan Hart
—The young transplant specialist wants to assist in the investigation of unexpected patient deaths. Or so he says.

Marissa Doyle
—The nurse has overseen many of the dead patients and has hidden secrets.

Dr. Michael Talbot
—The head of the transplant department, Talbot is a giant within the field. So why is a killer stalking his patients?

Short Whiny Guy
—Cadaver Man’s partner has seen too much.

The damp subbasement of Boston General Hospital smelled faintly of death and fabric softener. Corridors folded back on each other without apparent reason, which was both a blessing and a curse for Nia French.

A blessing because she was able to stay out of sight. A curse because she had to follow close or risk losing Cadaver Man, Short Whiny Guy and the rattling laundry cart.

Nia froze. The voice was near. Too near.

Heart pounding, she breathed through her mouth and eased closer to the off-green cinder block wall, wishing for some cover. Wishing the fluorescent lights weren’t so relentlessly bright.

Wishing she knew for sure she’d followed the right guys.

“Yeah, I got the keys. Why, you think I lost them already?” The second speaker was Short Whiny Guy, who had complained incessantly during the trip down from
the sixth floor. There was a metallic jingle, and the sound of a door being unlocked.

“Just shut up and let’s get this thing loaded,” Cadaver Man ordered. She called him that because of the grayish skin and shadowed eyes she’d glimpsed when the elevators had shut on the men, leaving her wondering why they were changing the linens at two in the morning.

And why none of the beds in the Transplant Department were stripped.

Nia had followed them because this was her first assignment in HFH’s Investigations Division, and she was determined to prove herself.

Her previous assignments for Hospitals for Humanity had sent her to outbreaks and disaster areas worldwide, where her medical degree made her useful and her guts were taken for granted. It was good work, but it wasn’t where her heart lay. More than anything, she wanted to be an investigator—and now, finally, she’d been given the opportunity to work a case.

Hearing a metal door slide open and the men’s voices move away, Nia crouched down and eased around the corner, forcing her hands not to tremble from a mixture of nerves and excitement.

In contrast to the rest of the hospital, the loading bay was dark. The smell here was stronger, both of decay and of fabric softener, though the wide garage door let in a thin breath of Chinatown funk.

The men were gone. The big laundry hamper they had wheeled down from the sixth floor sat on the loading dock.

“Transplants failing for no good reason,” the dossier on this assignment read. “Supplies and pharmaceuticals disappearing from the Transplant Unit.”

Though the assignment didn’t officially begin until the next day, when she’d meet her new partner and they would be briefed on the full scope of the problem, Nia had sneaked into the hospital at midnight. She’d been hoping to discover something useful. Hoping to get a head start on impressing the senior investigator HFH had assigned to train her.

And here was her chance.

Stepping quietly on her soft-soled sneakers, she eased around the corner and crept toward the hamper. She had no concrete reason to suspect there was anything inside but laundry. But her left eyelid had twitched a warning, and the shift schedule indicated the linens in the Transplant Department were changed at seven in the morning, not two. Holding her breath, she stood on her tiptoes and peered inside the tall hamper.

It was full of laundry.

“Damn it,” she muttered under her breath, “why can’t they make these things shorter?” Twenty-eight-year-old Nia had topped out at five-two. Usually she could mask her short stature with determination, but the hamper didn’t care how tough she was, it still came up past her breasts. She had two choices—dive in and hope for the best or hang back and wait.

The sound of an engine and the rhythmic beep of a truck backing into the loading dock told her that “wait” was the better option. Darting behind a half-open door,
she pressed her eye to the crack by the hinge and congratulated herself on a fine hiding spot.

She’d be a good investigator. No matter what
certain people
thought, she was going to make it. It had been her dream for nearly ten years now, ever since she’d first heard the stories about a swashbuckling HFH doctor saving the world.

“Come on, let’s get it loaded and get out of here. This stuff gives me the creeps.” Short Whiny Guy’s voice preceded him onto the loading dock. Cadaver Man, looking grayer in the half-light, unlatched the back of the laundry truck and ran up the door. Nia froze.

That was no laundry truck.

An empty gurney was secured to one side. Equipment sprouted from every flat surface and dangled from the ceiling. A faint white mist wafted out, as though the air-conditioning had been turned from “chill” to “preserve.”

“Ay-uh. We wouldn’t want to keep him waiting for his things, would we?” Cadaver Man, who hadn’t spoken up to this point, gave a ghastly grin that was at odds with his down-home Maine accent.

Nia’s pulse raced. Her first night on the job and she already had a huge break. If she got on that van and figured out where it was headed, what it was doing, then she could solve the case in a single night.

Score one for Nia French.

Short Whiny Guy pushed the laundry hamper across a narrow ramp and into the cleared center of the cargo area. The cart’s dirty canvas and worn wheels looked in
congruous amidst so much stainless-steel and high-tech equipment.

“Come on, guys, give me a break here,” Nia whispered, her burst of optimism draining when Short Whiny Guy climbed into the back with the laundry hamper, as though it was his job to watch over the dirty linens. Cadaver Man shut the door and latched it securely.