Read Cowboy in My Pocket Online

Cowboy in My Pocket 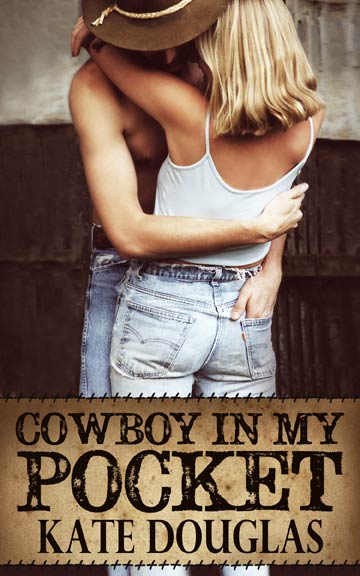 Cowboy in My Pocket

This is a revised author’s cut reissue—
Cowboy in My Pocket
was originally published by Hard Shell Word Factory in 2001, copyright © 2001 by Katherine A. Moore.

All characters in this book have no existence outside the imagination of the author, and have no relation whatever to anyone bearing the same name or names. These characters are not even distantly inspired by any individual known or unknown to the author, and all incidents are pure invention.

This story is dedicated, with much affection, to all romance authors, especially those whose editors have admonished them to “write the book of your heart.”

(With the caveat “so long as it has a cowboy hero, an amnesiac bride, and a marriage of convenience. Oh, and a secret baby wouldn’t hurt.”)

Friends, this one’s for you.

“MICHELLE, DARLING, it’s good to see you. How’ve you been?”

“Cut the crap, Mark. You, of all people, know how I’ve been. Forget the pleasantries. Why did you reject my story?”

“Let’s order first, sweetheart.” Mark Connor, never one to make eye contact in the first place, studied the oversized menu in front of him. Michelle Garrison seethed and drummed her freshly manicured fingernails on the damask tablecloth. Suddenly she realized she was tapping the toe of her left shoe in the same staccato rhythm. She took a deep, struggle-for-some-semblance-of-control breath that ended in a frustrated sigh.

The waiter appeared, leather-bound notepad in hand, to take their orders. “Michelle?” Mark smiled at her.

“I’m not hungry. You order.” Michelle glared at him, imagining large winged crows pecking his eyes. No, buzzards . . . buzzards made a much more impressive image.

“We’ll both have the luncheon salad . . . Roquefort for me, the low-fat house dressing for the lady.” Mark returned Michelle’s glare with an innocent look. “Well, you have put on a few pounds, darling. You need to exercise more.”

“I haven’t had time,
darling.
I’ve been sitting in front of my computer without a break for the past six weeks, finishing a manuscript for you to reject. The same manuscript I wrote following your ‘suggestions,’ using your ideas for plot and characterization. Now, before my healthy, low-fat lunch arrives, would you so kindly tell me why you aren’t buying my western?”

Mark smiled beatifically, the smile Michelle had once thought attractive until she realized he used that ubiquitous expression to hide everything going on behind those pale blue eyes of his. She waited for what seemed hours for his answer, returning his smile with a scowl. Finally he tapped his fingertips together in a little steeple, pursed his lips, opened his mouth, shut it again, hmmmm’ed as if pondering a new amendment to the Constitution, then said, “Well, you have to understand . . .”

“No, Mark. I don’t understand. I did everything you asked. ‘Put a cowboy on the cover, it’ll fly off the shelves,’ he says. ‘Marriages of convenience are always popular, the readers love them,’ so it’s got a blasted MOC. Mark, I did it all, right down to the baby. Remember telling me, ‘If it’s got a baby in it, the story’s gonna be a gold mine’? Well, it can’t be a gold mine if it doesn’t get published. I want to know what gives!”

Mark unfolded his napkin and spread it across his lap, ignoring Michelle and smiling politely at the waiter while the young man placed their salads on the table and departed.

“I’m waiting, Mark.” Michelle picked up her fork, thought briefly how it would look imbedded in Mark’s impeccably white shirt somewhere in the vicinity of his breastbone, then stabbed a large section of tomato instead.

“Don’t give me that ‘sweetheart’ crap.”

Michelle swore silently. She practically heard the gears engaging in the gray matter behind his high forehead. Mark always considered every word so carefully. Another irritating editorial trait, she thought. Right up there with rejecting her western.

“Michelle, you have written forty-three books for us, and almost all of them have had an impressive return. All, that is, except the last three.” He paused, resting his lips against his forefingers. “How can I say this without being blunt?”

“Yes, well, it’s my job to be honest. So, to put it bluntly, your ideas are tired, darling. Your characters all sound the same. That’s why I wanted you to try a western.”

“Well I did, dammit!” Michelle impaled a large piece of lettuce. How dare he find more fault with her story? “I worked hard on that western. My hero is a tall, dark and sexy cowboy; my heroine is an even sexier single mom with a disgustingly adorable little baby girl. They live on neighboring ranches, they ride horses, they chase cows around the field, they . . .”

“They don’t know a thing about being cowboys, they’ve obviously never been in Colorado, where your story is supposedly set, and I might as well have been reading about an insurance agent as a cowboy. Our readers aren’t stupid. When you write a scene about saddling a horse and you don’t know that the pommel’s at the front and the cantle’s at the back, or how to tighten the cinch so the saddle won’t slip, well, your readers are going to laugh—at you for writing it, and us for publishing it. Look at the stupid name you gave your heroine! Lee Stetson? Come on. I’m sorry, Michelle. Westerns are hot right now, and you don’t have a clue how to write them. You even have the hero make love to the heroine while they’re riding a horse. That’s physically impossible, darling. It hurts merely to think of it.”

His pained expression might have been funny under other circumstances.

“But it’s a really sexy scene . . . it’s . . .” Mortified, Michelle stared into her perforated salad. Mark loved her stories, he loved everything about her writing. Now he was saying it was awful? Worse than awful, embarrassing? She thought Lee Stetson was a really cute name.

The hefty advance that was going to pay off Michelle’s VISA bill suddenly dissolved into a puff of smoke and faded away. She gazed longingly after the imaginary cloud.

She blinked and the cloud disappeared. “Wait a minute,” she said, leaning forward. “How do you know the difference between a pommel and a, um, kettle?”

“It’s a cantle, Michelle. That’s what I’m trying to explain, if you’d only pay attention.” He waved a glossy magazine under her nose. “I spent two weeks at a dude ranch. It was a terrific experience. All these western manuscripts suddenly started making sense. I want you to go. Just two weeks at the Columbine Camp in Colorado. That’s all. You’ll learn everything you need to know about horses and cows and cowboys and the great outdoors. Trust me on this, darling. It’ll be good for you. You need a break, it’s not that expensive, and besides, you can write it off. We want to keep you in our stable, Michelle . . .” He grinned, obviously impressed with his play on words.

“You want me to go to a dude ranch? I don’t think so.” Michelle jabbed her fork in Mark’s direction, inordinately pleased when he backed away. “I don’t even like horses, and I’m certain I’d like cowboys even less. I imagine they’re both smelly, ill-tempered and impossible to control. I’ll just do a little more research, maybe watch an old John Wayne movie or two. Trust me, Mark. I’ll have my revision to you in, oh, about two weeks.” She pushed away from the table. “Now, thanks for lunch, and have a really nice . . .”

Mark reached across the table, lightly grabbed her wrist, and stopped her. She sat back, stunned. Mark was never forceful, not ever.

There wasn’t a trace of humor, or even sarcasm in his voice. “No revision, Michelle. This comes down from the editorial director, and we all know she takes her orders from marketing. Either you spend two weeks at Columbine Camp, which includes riding instructions . . . yes, dear, don’t look so surprised . . . on a real horse, and an authentic dusty trail ride following authentic, smelly, dusty cows, or you find someone else to buy your stories. Competition’s too steep, and there’re a lot of hungry writers out there willing to take a lot less money. My advice is to jump through the hoops and learn what you can. Then write the freshest, most knowledgeable romantic western ever.”

“You’re not my agent, Mark. You’re my editor. I thought you were my friend.”

“I am, Michelle. That’s why I bought you this issue of
Western Horseman
to read on the plane.” He held the thick magazine up in front of her and smiled broadly, his blue eyes sparkling and his dimples dimpling until he looked more like a cover model than a book editor. Michelle thought seriously of telling him the effect was totally wasted on her.

A dude ranch . . . cows and flies and dust, and waking up with the chickens, and more charges on the VISA bill . . .

“You’ll do it, Michelle. Call me when you get back. Don’t forget your magazine.” He flipped the brand-new issue of
Western Horseman
open to a glossy spread of photos and text. “Read it, sweetheart. Besides a great article about Columbine Camp, it’s just full of information about rodeos and barrel racing and horses and cowboys and cowgirls . . . you’re gonna love it. Have fun. Think western. I expect you to come home with a drawl.” He winked and smiled, flashing perfectly straight white teeth.

Michelle stared at the photos in the magazine. Her breath caught in her throat. “That’s him,” she whispered. She pointed at a photo of a dark-haired cowboy with a devil-may-care smile. “That’s my hero, the one you rejected.” She glared accusingly at Mark. “That’s exactly how I described him, tall, dark and handsome with broad shoulders and a sexy grin, and you tell me I don’t know what I’m writing about? This should prove to you that I wrote about a real cowboy. How could you reject my story?” She slapped the magazine down on the table, but couldn’t take her eyes off the man staring back at her. Actually, she hadn’t pictured her hero as quite so, well, elemental, but Mark didn’t need to know that.

Mark glanced at the photo, then grinned at Michelle. “His name’s Taggart Martin, and according to this article he lives right next door to Columbine Camp, on a huge ranch called the Double Eagle. Go, Michelle. Meet a real cowboy. Maybe you’ll be able to write a real western for a change.”

Mark tipped an imaginary hat and sauntered out of the restaurant. Speechless, seething with resentment, Michelle glared at his retreating figure.

Then she glanced at the table, littered with the remnants of their lunch. Damn him! He’d left her with the check.