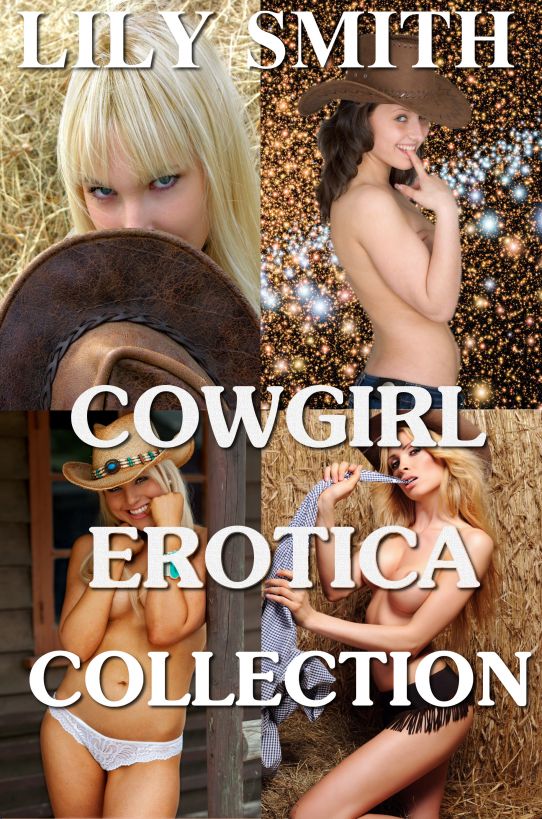 Copyright 2012 by Lily Smith. All rights
reserved. No part of this book may be used, reproduced, or
transmitted in any form or by any means, electronic or mechanical,
including photocopying, recording, or by any information storage or
retrieval system, without the written permission of the publisher,
except where permitted by law, or in the case of brief quotations
embodied in critical articles and reviews. For information, contact
[email protected]

Chapter 4: And They Called It A
Mine

Chapter 1: The Ever Innocent Mayan
Smile

Chapter 2: Needle in a Haystack

Chapter 3: Bank Teller with a
Fetish

Chapter 2: The Blue Fire in the Crystal
Ball

Chapter 4: The Rather Spectacular
View

Chapter 2: A Bitch of a Teacher

Jett leaned up against her horse and
murmured a curse at the heat that conspired to fuse her braided,
strawberry-blonde hair into her shirt. Her horse didn't seem to
mind at all, but then he didn't have to impress anyone. He walked
where he wanted, slept where he wanted, and relieved himself where
he wanted, unlike Jett, who rather was burdened by the obsessive
habit of trying to look her best every minute of the hour while the
weather tried to buck off her best attempts otherwise.

"I'm just fucked every way from Sunday. No one is gonna
hire some inbred out-of-towner from Texas who is as young as me. No
one. They would crucify me anyway" she muttered to herself. It was
Jett's way of protecting herself from the constant barrage of
rejections from each and every employer she visited. She had been
to them all: barber shop, sheriff, bakery, church, even the
damnable undertaker's office. To think she had literally begged to
service the comfort of
dead people
. She would consistently tell herself "just get it
over with" as she walked along the dusty, dingy town of Gladewater
that seemed to brag about every fatal snakebite you could imagine.
And that didn't include the gila monsters, tarantulas and
scorpions. Jett had stepped on a scorpion once with a dozen baby
scorpions on its back. Every now and then she could swear that she
felt some hideous alien-like
thing
crawling across her toes as she dragged her boots
from shop to shop, looking for any job that would feed her empty
belly, which incidentally seemed to be munch on her shirt as she
walked.

She blew another crooked ring of smoke
from her last cigarette as she looked across the street at the
saloon. At nearly five o'clock, it was already becoming the rowdy
cesspool of vermin it was known for. The schedule of iniquity it
housed and hawked mimicked the tides, where all manner of deadness
and decay washed in from the depths. She could set her watch by it,
if she had one. Hell seemed to spit up and then swallow back down
its bile content like a pack of vultures.

"That is the last place in town to
look for work." she thought to herself as she squeezed the excess
sweat that drenched her tits, which were she feared publicly
visible from the wetness of her white shirt. She didn't care if she
had to bathe with pigs or wash out beer bottles with her fingers,
as long as she could be employed by someone, somewhere, she would
do anything. Well, almost anything. She'd be damned if she was
going to eat oysters or shrimp. Anything else was fair
game.

She squinted like a peeping tom at the
saloon across the street, wishing she had a telescope to gauge the
depth of depravity contained therein. It was like trying to spy on
the innards of Hell itself. It wasn't as if she wanted to actually
work there. It was just the accursed body she dragged across the
earth every day that needed food, water, shelter and...sex.
Unfortunately she couldn't live on sex alone and needed the other
three to engage in much of anything involving the exchange of
bodily fluids.

"Get a hold of yourself and stay
rational" she said, straightening her shirt.

She bravely traversed the seemingly
endless path towards the saloon of Hell which bared a "HELP WANTED"
sign in the mud caked window. She stuffed her braided ponytail down
the back of her drenched shirt as she walked and tried to suck in
her meager breasts, looking as man-like as she could. A lone cactus
plant stood aloof by the door, looking suspiciously like a porter
to circus of freaks. As soon as she stepped through, a shiny silver
dollar gleamed from the floor. A good sign? She reached down to
pick it up. This proved a futile endeavor.

A rock-hard slap on her ass was dished
out to her not two feet from the swinging doors behind her. A
circular laughter erupted from a nearby table full of misfits and
misanthropes as she realized the coin was somehow glued to the
floor. Her youth & beauty often betrayed her to a not-so-subtle
naivety.

"There is more whar that came from
schnookems!" a string-bean shaped cowboy said as he pushed open the
exit to the saloon. Her ass still tingled from the mild spank she
got for her desperation.

She frantically scanned the entire
saloon which seemed to come alive with every tentacled plant and
scurrying creature imaginable. Even the floor conspired against
her. She looked up and saw a fluffy black cat gaze from the beams
above while a parrot perched on its stand at arm's length away. She
thought of pirates and pestilences the further in she
went.

"Where is the owner of the saloon? I
want to ask em about the sign outside the..." she started to
say.

"He is in back counting the dough.
That way" the bartender said, pointing towards a set of double
doors leading downward into a lower level of Hell. She started her
descent amid the hot beer and circus of catcalls and
pandemonium.

Her boots stepped off the bottom of
the staircase and saw a man hunched over on his desk, his back
facing her. His white skimmer sat solemnly next to a half-drunken
bottle of bourbon on his oak desk.

"I told you stubborn idiots not to
bother me when I'm figurin' figures god dammit" he said, spitting
the words as he scribbled downward.

He turned around and gave her a pale
stare, looking her up and down.

"Thought it was one o' my stooges
interrupting me again. Are you lost?" he asked.

"No, just want to inquire about the
job uh, sir. You know, sign out front" she stated, pointing towards
the entrance.

A glistening phosphorescence from the
corner of the room caught her eye. A pod of glowcap mushrooms
huddled together in the thick moisture of the cellar.

"Name's Jake. Can you cook?" he asked
almost rhetorically.

"Yes indeed. Any nutritious thing you
want." she said as she swallowed, hoping glowcaps weren't on the
menu.

"We ain't much for nutrition here." he
said, twirling the ends of his mustache. He looked her over
calculatingly, like he was buying a mule. Jett had the body of an
acrobat and had trained as such by her own father in a traveling
circus years prior to the famine that now creeped along the
prairies. Her legs were honed and sculpted in scandalous
perfection, a product of years of tortuous training among lions and
clowns.

"What I really need is a gal who can
balance five glasses of beer and dance from table to table while
risking an occasional spank or pinch on the way back to the bar. Is
that you, Miss?" he said.

"Well I will do my best" she said
coyly.

"That's not good enough, not by a long shot. You either do
it, or get lost. None of this
I'll do my best
shit. You either do it or don't do it.
Understand?" he added.

"I run a tight-ass ship in here, and
discipline is my middle name. We're a might short on brotherly love
too I reckon. You don't seem the church-goin type though. Am I
correct in that assumption?

She nodded. She glanced up at the
painting above his desk, which she imagined was some cherub in a
freefall.

"Boy yer just naturally blabby aren't
cha" he said with a chuckle. There was a certain charisma to his
smile that negated uneasiness. Still, she felt silence was golden
in this case.

"When do I start?" she said
assumingly, her stomach rumbling from two days without a decent
meal.

"You start yesterday. I am bettin' you
won't last fer more than a week, if that. But at least you just
might not starve for the next few days. And just so you know, your
biggest tips don't come from your exceptional service skills. No
sir. They come from the number o' spanks on yer pretty little
derriere. Girls who don't get spanked get no tips. Not my rules,
just nature's way I suppose. So, if ya want out, now is the time to
say so. You can walk out that door and we'll never raise cuss or
fuss over you leavin'. Still interested?" he asked.

She realized for the first time in her
life, she couldn't say no. Her mind and soul were telling her not
to sign on the bottom line, but her parched throat, empty belly and
sweaty, grimy arms said otherwise and coerced her as if to ink her
signature in hot blood.

"Yes of course I am interested. What
should I wear?" she asked.

"You wear that barmaid outfit over
yonder in the closet. See it? The one that has stripes" he said,
pointing away from her. "Do you see?" he remarked as he used an ace
of spades to floss between the sharp teeth on the side of his
mouth.

The closet housed a handful of
theatrical costumes and trinkets, like he had been ringmaster of
the circus at some point in his life, managing wild animals of some
sort. She spied the outfit that was now hers. The front of the
outfit reminded her of prison garb. The back on the other hand like
a costume fit for a king's court jester. However she reminded
herself that the jester was the only one in the kingdom who could
insult the king and not suffer a scratch for it, as long as it was
part of the show. She wondered if she would have to sing as well as
endure the rigors of daily spankings from the dusty demons outside.
She felt her stomach nibble on her shirt again.

She walked behind the closet to a
private stall and put it on.

She walked over to the closet and took
out the outfit she wore. It looked pathetically silly.

"Now for the true test of
colors
" he gabbed as if an audience of circus
ghosts looked on.

"Come over here" he said
wolfishly.

She walked over to him with her
theatrical outfit barely keeping her tits from springing
outward.

"Turn around with your back facing me"
he ordered.

She turned around with her hands on
her hips.

He brought his hand back and smacked
it upside her left ass cheek. He paused a second to gauge her
response. She stood still. A bead of sweat dribbled down the side
of her face.