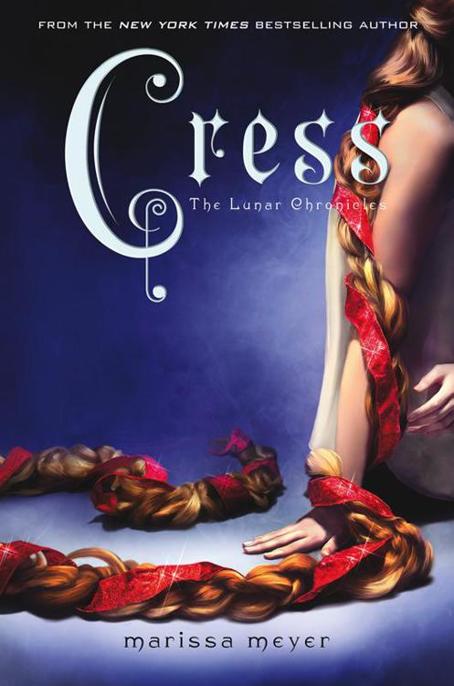 For Jojo, Meghan, and Tamara

When she was just a child, the witch locked her away in a tower that had neither doors nor stairs.

Her satellite made one full orbit around planet Earth every sixteen hours. It was a prison that came with an endlessly breathtaking view—vast blue oceans and swirling clouds and sunrises that set half the world on fire.

When she was first imprisoned, she had loved nothing more than to stack her pillows on top of the desk that was built into the walls and drape her bed linens over the screens, making a small alcove for herself. She would pretend that she was not on a satellite at all, but in a podship en route to the blue planet. Soon she would land and step out onto real dirt, feel real sunshine, smell real oxygen.

She would stare at the continents for hours and hours, imagining what that must be like.

Her view of Luna, however, was always to be avoided. Some days her satellite passed so close that the moon took up the entire view and she could make out the enormous glinting domes on its surface and the sparkling cities where the Lunars lived. Where she, too, had lived. Years ago. Before she’d been banished.

As a child, Cress had hidden from the moon during those achingly long hours. Sometimes she would escape to the small washroom and distract herself by twisting elaborate braids into her hair. Or she would scramble beneath her desk and sing lullabies until she fell asleep. Or she would dream up a mother and a father, and imagine how they would play make-believe with her and read her adventure stories and brush her hair lovingly off her brow, until finally—finally—the moon would sink again behind the protective Earth, and she was safe.

Even now, Cress used those hours to crawl beneath her bed and nap or read or write songs in her head or work out complicated coding. She still did not like to look at the cities of Luna; she harbored a secret paranoia that if she could see the Lunars, surely they could look up beyond their artificial skies and see her.

For more than seven years, this had been her nightmare.

But now the silver horizon of Luna was creeping into the corner of her window, and Cress paid no attention. This time, her wall of invisi-screens was showing her a brand-new nightmare. Brutal words were splattered across the newsfeeds, photos and videos blurring in her vision as she scrolled from one feed to the next. She couldn’t read fast enough.

The net was littered with horrors. Victims dead in the streets with shredded abdomens and blood leaking into the gutters. Feral men-creatures with gore on their chins and beneath their fingernails and staining the fronts of their shirts. She scrolled through them all with one hand pressed over her mouth. Breathing became increasingly difficult as the truth of it all sank in.

This was her fault.

For months she had been cloaking those Lunar ships from Earthen detection, doing Mistress Sybil’s bidding without question, like the well-trained lackey she was.

Now she knew just what kind of monsters had been aboard those ships. Only now did she understand what Her Majesty had been planning all along, and it was far too late.

Earth had been taken unaware, and all because she hadn’t been brave enough to say no to Mistress’s demands. She had done her job and then turned a blind eye to it all.

She averted her gaze from the pictures of death and carnage, focusing on another news story that suggested more horrors to come.

Emperor Kaito of the Eastern Commonwealth had put an end to the attacks by agreeing to marry Lunar Queen Levana.

Queen Levana was to become the Commonwealth’s new empress.

The shocked journalists of Earth were scrambling to determine their stance on this diplomatic yet controversial arrangement. Some were in outrage, proclaiming that the Commonwealth and the rest of the Earthen Union should be preparing for war, not a wedding. But others were hastily trying to justify the alliance. With a swirl of her fingers on the thin, transparent screen, Cress raised the audio of a man who was going on about the potential benefits. No more attacks or speculations on when an attack might come. Earth would come to understand the Lunar culture better. They would share technological advances. They would be allies.

And besides, Queen Levana only wanted to rule the Eastern Commonwealth. Surely she would leave the rest of the Earthen Union alone.

But Cress knew they would be fools to believe it. Queen Levana was going to become empress, then she would have Emperor Kaito murdered, claim the country for her own, and use it as a launching pad to assemble her army before invading the rest of the Union. She would not stop until the entire planet was under her control. This small attack, these sixteen thousand deaths … they were only the beginning.

Silencing the broadcast, Cress set her elbows on her desk and dug both hands into her hive of blonde hair. She was suddenly cold, despite the consistently maintained temperature inside the satellite. One of the screens behind her was reading aloud in a child’s voice that had been programmed during four months of insanity-inducing boredom when she was ten years old. The voice was too chipper for the material it quoted: a medical blog from the American Republic announcing the results of an autopsy performed on one of the Lunar soldiers.

The bones had been reinforced with calcium-rich biotissue, while the cartilage in major joints was infused with a saline solution for added flexibility and pliability. Orthodontic implants replaced the canine and incisor teeth with those mimicking the teeth of a wolf, and we see the same bone reinforcement around the jaw to allow for the strength to crush material such as bone and other tissue. Remapping of the central nervous system and extensive psychological tampering were responsible for the subject’s unyielding aggression and wolf-like tendencies. Dr. Edelstein has theorized that an advanced manipulation technique of the brain’s bioelectric waves may also have played a role in—

The sweet ten-year-old’s voice was silenced, leaving the satellite humming with the sounds that had long ago been relegated to the back of Cress’s consciousness. The whirring of fans. The thrumming of the life support system. The gurgling of the water recycling tank.

Cress gathered the thick locks of hair at the nape of her neck and pulled the tail over her shoulder—it had a tendency to get caught up in the wheels of her chair when she wasn’t careful. The screens before her flickered and scrolled as more and more information came in from the Earthen feeds. News was coming out from Luna too, on their “brave soldiers” and “hard-fought victory”—crown-sanctioned drivel, naturally. Cress had stopped paying attention to Lunar news when she was twelve.

She mindlessly wrapped her ponytail around her left arm, spiraling it from elbow to wrist, unaware of the tangles clumping in her lap.

Her ten-year-old self piped back, “Please clarify your instructions, Big Sister.”

Cress shut her eyes against the screen’s glare. “I understand that Emperor Kai is only trying to stop a war, but he must know this won’t stop Her Majesty. She’s going to kill him if he goes through with this, and then where will Earth be?” A headache pounded at her temples. “I thought for certain Linh Cinder had told him at the ball, but what if I’m wrong? What if he still has no idea of the danger he’s in?”

Spinning in her chair, she swiped her fingers across a muted newsfeed, punched in a code, and called up the hidden window that she checked a hundred times a day. The D-COMM window opened like a black hole, abandoned and silent, on top of her desk. Linh Cinder still had not tried to contact her. Perhaps her chip had been confiscated or destroyed. Perhaps Linh Cinder didn’t even have it anymore.

Huffing, Cress dismissed the link and, with a few hasty taps of her fingertips, cascaded a dozen different windows in its place. They were linked to a spider alert service that was constantly patrolling the net for any information related to the Lunar cyborg who had been taken into custody a week earlier. Linh Cinder. The girl who had escaped from New Beijing Prison. The girl who had been Cress’s only chance of telling Emperor Kaito the truth about Queen Levana’s intentions should he agree to the marriage alliance.

The major feed hadn’t been updated in eleven hours. In the hysteria of the Lunar invasion, Earth seemed to have forgotten about their most-wanted fugitive.

Cress catapulted from her chair at the word
mistress
, spoken even all those years ago with a tinge of dread.

Her movements were a precisely choreographed dance, one she had mastered after years of practice. In her mind, she became a second-era ballerina, skimming across a shadowy stage as Little Cress counted down the seconds.

00:21.
Cress pressed her palm onto the mattress-deploy button.

00:20.
She swiveled back to the screen, sending all feeds of Linh Cinder beneath a layer of Lunar crown propaganda.

00:19.
The mattress landed with a thunk on the floor, the pillows and blankets wadded up just as she’d left them.

00:18. 17. 16.
Her fingers danced across the screens, hiding Earthen newsfeeds and netgroups.

00:14.
A flick of her wrists, casting the blanket up like a wind-caught sail.

Alyssa's Choice by Alicia White
The Meaning of Human Existence by Edward O. Wilson
Addicted In Cold Blood by Laveen, Tiana
Kelpie (Come Love a Fey) by Draper, Kaye
to Tame a Land (1955) by L'amour, Louis
Ghost Killer by Robin D. Owens
Follow the Leader by Mel Sherratt
Speedboat by RENATA ADLER
Summon the Bright Water by Geoffrey Household
The First American: The Life and Times of Benjamin Franklin by H. W. Brands
Our partner