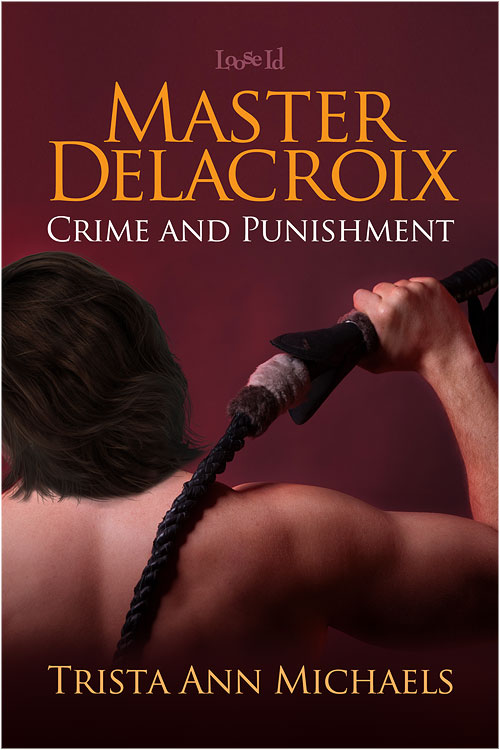 Copyright © May 2014 by Trista Ann Michaels

The sound of the whip as it snapped through the air calmed Nathan Delacroix. He’d been uptight lately, unsettled, and he couldn’t seem to shake it. He brought his arm back and flicked the whip once more. The tip brushed the paper taped to the wall but didn’t rip it.

In his mind the light brown color reminded him of a tan woman, naked and strapped to the poles. He imagined how her skin would ripple as the tail of the whip snapped across her flesh. Her cries of pain mixed with pleasure echoed in his ears.

He drew in a slow, deep breath.

Wielding a whip required control of his body, his breathing, even his emotions. If he flicked it too softly, he wouldn’t get the reaction he desired. Too hard, and, well… Despite the fact that he enjoyed inflicting pain, he never wanted to go beyond what the submissive would enjoy. It was one thing to push boundaries. It was another to cause so much pain the pleasure was lost.

He swung again, this time lower. A wave moved over the paper similar to how it would move beneath the skin. He tilted his head and flicked the whip from the other direction, catching the paper about where a woman’s side would be. He imagined how she would arch her back and sigh toward the ceiling.

He loved the sound of a submissive on the edge of subspace.

A flash of an image popped into his head, and he froze. It happened so fast he couldn’t hold on to it. Frowning, he stared toward the paper. All his life he’d been able to pick up emotions from people. Sometimes even small images or impressions, depending on how strong the connection. He’d learned over the years to develop that gift, especially where submissives were concerned.

But this felt different.

Taking a deep breath, he pushed the image aside and returned to swinging the whip. Twice more he struck the paper, letting the sounds carry his thoughts away.

For a split second, darkness encompassed the area around him, startling him. The image of a gun flashed through his mind. Shaking his head, he dislodged the mental picture. The room returned to normal, but his peace had evaporated. Instead, he felt hatred, anger…evil. He shivered as coldness washed over him, engulfing him in an icy embrace.

Firming his lips, he swung the whip again, determined to regain his peace of mind. Only once in his life had he received images, the origin of which he couldn’t pinpoint. This had to be a fluke.
Please let this be a fluke.

The whip snapped. The paper rattled. At the loud sound, another image popped into his head. Darkness again surrounded him. There was a sudden and bright flash of light; then piercing pain exploded behind his forehead.

He grunted and swung the whip in defense as though fighting off an unseen foe. The darkness faded, and the room came back into view, leaving Nathan shaky and confused. He stared at the wall in unease. The paper had ripped from end to end, and a thin black mark appeared on the red wall from the tip of the whip as it struck. If that had been a flesh-and-blood person, he could’ve really hurt her.

He tried to slow his racing heart, his ragged breathing. A throbbing pain persisted behind his eyes, and he raised his hand to rub his forehead.

His muscles tensed and bunched. Nausea rolled through his stomach. What the hell had just happened?

“Since when do you break paper?”

Nathan opened his eyes and squinted toward his assistant, Deloris. She stared at him in motherly concern. Her shoulder-length gray hair was pulled back today, her piercing blue eyes full of worry.

He smiled slightly, trying to put the older woman at ease. “The whip slipped.”

She snorted softly. “Your whip never slips. Are you okay?”

“I’m fine, Dee,” he said, calling her by the nickname he’d given her years ago at the FBI when he’d worked there as an agent.

“It’s just a bad headache. Did you need something?” he asked.

“I wanted to tell you about an interesting phone call you received.”

He raised an eyebrow, his curiosity piqued. Normally Dee didn’t tell him about things like that, for she handled most everything without telling him. She’d been with him so long she knew what he needed done, and did it.

Nathan frowned slightly. The headache was still there but now just a nagging pain. “James Connelly?”

Nathan grunted. “That should be interesting. What did you tell him?”

“I told him I would get back with him. I wasn’t quite sure how you felt about that.”

Nathan gave a shrug as he began to roll the whip back up so he could put it away. “I’ll talk to him. Any time before the club opens is fine.”

“I’ll let them know.” She tilted her head slightly. “And I hate to tell you this when you apparently have a pounding headache, but…”

He glanced over at her. “Is it that obvious?”

“You normally don’t scowl like that, Nathan. Especially at me.”

He smiled slightly at her honesty. And she was right. He never scowled at Dee. “What’s the bad news?”

She gave him a look of sympathy that put him on edge. “Your brother’s here.”

He sighed and dropped the rolled-up whip onto the toy table. “Did he say what he wanted?”

“Sweetheart, what does he always want when he’s here?”

For Nathan to come home—to work things out with their dad.

“Tell him I’ll be there in a few minutes,” Nathan grumbled as he tried to think of a way to get out of this. He loved his twin brother; he just wished Daniel would stop by for other reasons. Why did it always have to be a guilt trip?

Nathan looked up and glared past Dee’s shoulder to his brother, who stood just inside the club playroom. With his arms crossed over his chest, Daniel stared around the room with his usual look of disdain. Just like their father. As always, Daniel was a blank slate. Nathan had never been able to read his brother. Or their mother, for that matter. His father was the only family member he’d been able to connect with. Unfortunately.

“If you’re here to harp at me about not going home, Daniel, you can leave,” Nathan said drily.

“I do not harp,” Daniel said as he began to slowly walk toward Nathan.

Dee gave Nathan another look of sympathy as she turned to leave the room, making Nathan sigh tiredly.

“I see you still have to tie women up to get them to have sex with you,” Daniel drawled.

Nathan gritted his teeth, which only served to worsen the headache behind his eyes. “I don’t have time for this, Daniel. Just get it over with and relay Dad’s message.”

Nathan gazed at his brother as worry tightened his chest. “I just talked to Mom last night.”

Daniel dropped his arms and moved closer. “You know Mom’s not going to nag at you to talk to Dad, but you also know it’s what she wants.”

“How do you know that? You haven’t been within fifty feet of the man since you left. Come on, Nate. You know how Dad is. He’ll die before he would apologize first. You’re going to have to be the bigger person here.”

Nathan shook his head as he moved to pull the paper from the wall.

“I know how Dad feels about me!” Nathan snapped as he glanced at Daniel over his shoulder. “Hell, I can feel it every time I get close to the man. I freak him out, and you know it.”

“If you’d kept your damn mouth shut and not called him on his shit, he wouldn’t even know about your empathic abilities,” Daniel growled.

“The man’s a lying asshole.”

“Granted,” Daniel replied. “But you didn’t have to ‘out’ him in front of the damn board of directors.”

Nathan turned to glare at his brother. “What was I supposed to do? Let him keep lying and put the company in bed with the mob?”

“I agree Dad made a stupid move, but he’s seen the light.”

“Only because he wasn’t given a choice. I still believe he would’ve gone through with it. He doesn’t want me around because he can’t keep things from me.”

“Which is exactly why the board wants you to come back.”

Nathan shook his head. “Hell no. They have you.”

“They settle for me. They want you.”

Nathan let out a slow breath. His head was pounding worse than before. It began to worry him. He’d never gotten a headache along with an impression. If that was what it was, because he still wasn’t sure. “Daniel,” he began in as calm a voice as he could muster. “I’m a doctor of psychology, not a businessman.”

“You own a business, Nathan. What do you call this?” Daniel asked as he spread his hands.

“I call this my passion. Consulting for the FBI is my job. I don’t need another.”

“What you need is a smack upside the head,” Daniel grumbled. “Do you have any idea how much Mom misses you?”

“I know,” he murmured. That was his one regret. Their mother. “I’ve talked to her. She might not always understand, but she doesn’t nag me about it.” He gave his brother a pointed look Nathan hoped he heeded. Daniel hardly ever did, though, so why would today be any different?

Daniel threw up his hands. “Fine. I tried.”

“So how are things going at this place?” Daniel asked as he strolled casually around the room.

Nathan’s eyebrow rose in surprise at Daniel’s sudden change in topic. “Good. Club’s full. I have a waiting list of people who want to join. I just don’t have the room. I’m thinking of adding on.”

Daniel glanced at him in surprise. “There’re that many people who are into this sort of stuff?”

“You’ve been hanging around Dad too long, Brother. You should check it out sometime and stop jumping to conclusions. The subs don’t bite.”