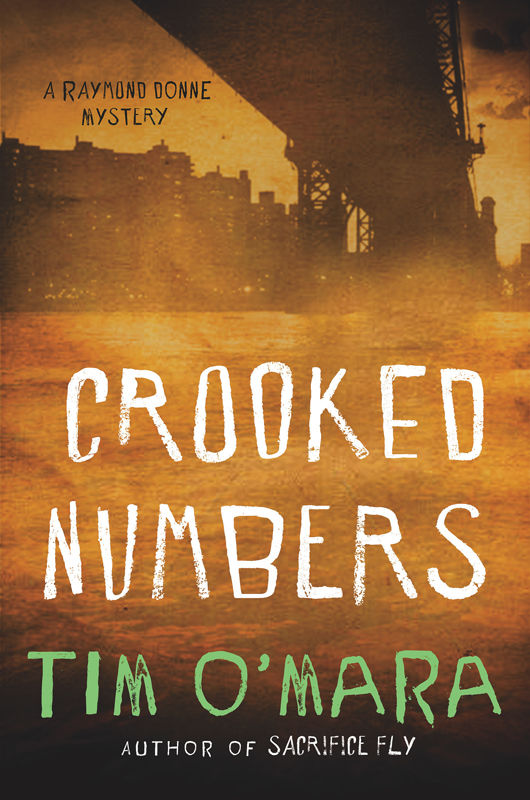 For my wife, Kate

All the proof I’ll ever need

ONCE AGAIN, I AM INDEBTED
to my fellow villagers for their contributions to making the writing experience so fulfilling.

I wish to thank the students, families, and talented staff members of the Computer School for their support, inspiration, and the joy they bring to my day job. I am equally grateful to the folks at P.S. 87 and the Center School for giving my daughter the education all children deserve.

A special note of thanks to Ramapo for Children. Raymond would not be around if I were not a teacher, and I would not be a teacher were it not for the summers I spent at camp. Any readers interested in children with special needs should check out their website,
www.ramapoforchildren.org
, and find out how they can share in the magic.

Scott Kennedy was extremely generous with sharing his knowledge of the pharmaceutical industry, as was Dave Stribling with his expertise as a pharmacist. Of course, any errors are completely my own.

Thanks to Dallas Murphy, friend and writer, for the best piece of advice I received during my introduction to the book business: “Do the writing. Don’t do the math.”

I am—as are writers and readers everywhere—deeply indebted to the public libraries and their fabulous librarians across the country. I especially wish to give praise to the Center for Fiction in Manhattan, Mary Barrett of the Newport (Rhode Island) Public Library, Madeline Matson of the Missouri River Regional Library in Jefferson City, the good folks of Merrick (New York) Library, and Jude Schanzer and Mary Ellen Fosso of my hometown East Meadow (New York) Public Library.

Some of the nicest and most knowledgeable folks in the business can be found working in the independent bookstores. To name a few, I am so glad the following had this new guy’s back: Scott Montgomery of Mystery People in Austin, Texas; Adrean Darce Brent of Mysterious Galaxy stores in southern California; Jamie and Robin Agnew of Aunt Agatha’s in Ann Arbor, Michigan; Jonah and Ellen Zimilies of [words] in Maplewood, New Jersey; Loren Aliperti of Book Revue in Huntington, New York; Otto Penzler and his staff at the Mysterious Bookshop in Manhattan; and Jenn Worthington of Word in glorious Greenpoint, Brooklyn. Support your local indie bookseller!

I sold a lot of books in mid-Missouri, which would not have been possible without the help of Cece McClure of Downtown Book & Toy; Warren Krech and John Marsh of KWOS Radio; Jack and Tom Renner; the folks at Cameron’s Café in Holts Summit (who needs a writer’s studio?); and the incomparable, unsinkable Wyn Riley.

My agents, Erin Niumata and Maura Teitelbaum of Folio Literary, have answered all my questions with respect and clarity. Thanks to all the pros at St. Martin’s/Minotaur Books, especially Hector DeJean, my publicist, who handles my many calls and requests with great patience—and editor extraordinaire Matt Martz, who simply makes my books better.

My mid-Missouri family continues to stick by this New Yorker. Thanks to Gene and Janice Bushmann, the Bushmanns of Columbia, Missouri, and Maggie and Elise Williams. A big shout-out to my father-in-law, Les Bushmann, who’s always there with pats on the back and the occasional “atta boy!” Every writer should have a mother-in-law like mine. When I married her daughter, I had no idea Cynthia Bushmann would turn out to be an amazing copy editor and proofreader. I truly stepped into a honeypot.

Thanks to my sister Ann and my brother Jack—and their families—for their support and help in spreading the word.

My sister Erin brought her considerable marketing and design skills to making her big brother look like he knew what he was doing. Her husband, Detective Will Donohue of the NYPD, was kind enough to share some of his knowledge with me. You guys produced a trio of pretty fine nephews for me, as well.

Once again, a huge debt of gratitude is owed to my brother, Sergeant Mike O’Mara of the Nassau County Police Department. It’s nice to have an expert who’s only a phone call away and is almost always up for a beer—or seven.

Mom, what can I say? I’ll never get tired of seeing you at my readings with that look on your face. And, yes, I promise not to tell the others that I’m your favorite.

I can’t believe any writer has ever had a better first-draft reader than I have in Mike Herron. I’m looking forward to seeing
Wannabe
up on the shelves real soon. No pressure.

To my wife, Kate: check the dedication. You know I don’t like to repeat myself.

Eloise, you continue to amaze and amuse me—and I’m thrilled you’re as proud of me as I am of you. You totally rock!

IT’S NEVER EASY LOOKING INTO
the face of a dead kid.

Eyes that should be tracking a fastball or twinkling with mischief, shut forever. The mouth—perfectly suited for spittin’ out rhymes, lame homework excuses, or jokes about yo’ mama—never to be heard from again.

Douglas William Lee was two months shy of his seventeenth birthday when he was murdered, and he used to be one of mine. He was in my class for two years—about three hundred and sixty school days—and I filled his head with math, literature, history, and science. He’d sit there and sometimes bitch and moan about the work and “Why we hafta learn this stuff anyways?” and turn around to cut on his friends, but he did the work and learned the stuff and showed up to my class every day. His mom made sure of that because she wasn’t going to let Douglas William Lee make the same mistakes his father had.

I folded my hands in front of me and stood there, looking down at Dougie, lifeless in his casket, wondering what mistakes had led to this. What the hell could this boy have done to cause someone to stick a blade in him over and over again and let him bleed out on the cold, dark tennis courts under the Williamsburg Bridge? I stared at the gold crucifix Dougie’s mom must have put around her dead son’s neck. Right. Where the hell was Jesus when Dougie needed a little salvation?

Teachers know. We only have these kids for a short time. We throw a whole bunch of knowledge at them and hope more sticks than falls away. They have no idea what life’s going to bring, so our job is to prepare them the best we can, and then we let them go. I had last seen Dougie about a year and a half ago when he swung by my room on the last day of school to pick up his diploma. He shook my hand, thanked me for everything I’d done for him, and promised to come back and visit. He never did.

Most don’t. They get caught up in high school, relationships, and family stuff. Before they know it, a year and a half has gone by and the last thing on their minds is looking back. That’s the way it should be. But I’d be lying if I said I wasn’t interested in seeing the results of all my time and effort every once in a while.

More than a few of the kids who graduate from my middle school never make it through high school. There are too many distractions and temptations when you come of age in and around the projects of Williamsburg, Brooklyn. You can go on up to the roof of your building and stare across the river at Manhattan—minutes away by bus or train—the skyline tempting you with the promise of adventure and excitement. You see too many examples of folks who are “gettin’ by” with no education and no jobs, and too few role models who’ve chosen to stick with the hard work.

Dougie was going to be different.

With the help of his uncle, he’d received a scholarship to one of the top private schools on Manhattan’s Upper West Side. Dougie had all the things a private school looks for when handing out free rides: a reading disability, a single mom, and brown skin. Exactly the kind of student whose smiling face you put in the glossy brochures and slick slide shows when asking wealthy New Yorkers to part with some of their hard-earned Wall Street cash. Dougie was going to be a success story people on both sides of the river would want to take credit for.

And now someone had taken all that away.

I knew whose voice it was before I turned. I’d listened to it many times during the two years I’d had her son. She was dressed in black and around her neck she wore a crucifix identical to her son’s. Mrs. Lee reached out and grabbed my hands, and as she squeezed them, I watched her tired eyes—Dougie’s eyes—fill with tears.

“Thank you so much for coming,” she said, her voice catching slightly. “You meant so much to Douglas.”

She squeezed my hands a little tighter and gave them a small shake. “There’s nothing
to
say, Mr. Donne. We just have to trust the good Lord has a plan and Douglas is a part of it.” She closed her eyes and fought off a pained look that threatened to take over her face. “I just can’t imagine what that plan would be though, Mr. Donne. I truly can’t. He was not even … my baby boy was…”

Dougie’s mother collapsed, and I surprised myself by catching her. Before my knees gave in to the weight and we both hit the carpet, I was able to guide her small frame to a seat a few feet away from her son’s casket. We were immediately surrounded by a group of women who had been gathered somewhere nearby.

“What happened?” one of them asked, glaring at me, as if whatever had happened must have been the fault of the only white guy in the room.

Before I could answer, another woman, armed with a funeral home fan and a glass of water, said, “The poor dear’s had enough is all, Wanda.” The woman gave me an apologetic look as she fanned Mrs. Lee. “She has had enough.”

We all watched as Mrs. Lee took a sip of water, followed by a few deep breaths, and slowly opened her eyes. A small sense of calm returned to her face and she looked slightly embarrassed by all the attention.

“I’m fine, ladies,” she said. “Thank you.” She blinked a few times before adding, “I would like to talk to Mr. Donne alone now, please.”

Entangled (A Tryst Novel) by Alex Rosa
Soda Pop Soldier by Nick Cole
Coastal Event Memories by A. G. Kimbrough
Heartstrings by Rebecca Paisley
Nothing is Forever by Grace Thompson
Uncovering Annabelle by N. J. Walters
The Thorndykes 1: Dispossessed by Lynne Connolly
Malakai by Michele Hauf
Death of a Hussy by Beaton, M.C.
Ghost in the Hunt by Moeller, Jonathan
Our partner