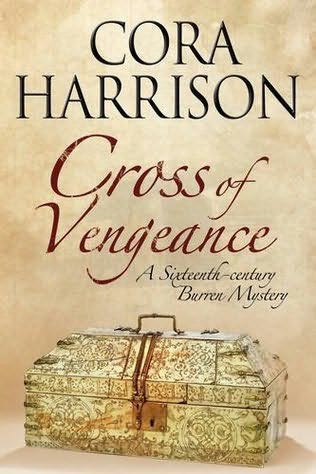 The Burren Mysteries by Cora Harrison

The Burren Mysteries by Cora Harrison

A SECRET AND UNLAWFUL KILLING

THE STING OF JUSTICE

First published in Great Britain 2013 by

First published in the USA 2014 by

The right of Cora Harrison to be identified as the author of this work has been asserted in accordance with the Copyright, Designs & Patents Act 1988.

For Eleanor and John
With love and gratitude for your appreciation

Thanks are due to my agent, Peter Buckman of Ampersand Agency, for his excellent advice, his enthusiasm and his appreciation of Mara, the Brehon, even after ten books about her; to my editor, Anna Telfer for her positivity and excellent advice and to the team at Severn House for their continued interest in publishing these books about an obscure law, set in an obscure place in the west of Ireland.

Thanks are also due to Michael MacMahon whose article about the double-armed cross set in stone on the gable wall of the medieval church at Killinaboy first roused my interest in the pilgrims who may have come to see the relic of the true cross housed in the round tower beside the church.

There are three grades of Brehon (a maker of judgements):

The first grade may only decide on matters which relate to the lowest in society, such as craftsmen. He or she has an honour-price of seven séts, three-and-a-half ounces of silver or four milch cows.

The second grade is learned in law and in poetry and has an honour-price of ten séts, five ounces of silver or five milch cows.

The third grade is named as ‘the judge of three languages’ and he or she is competent in traditional law, poetry and canon law and has an honour-price of fifteen séts, seven-and-a-half ounces of silver or eight milch cows. This Brehon may administer the laws of a kingdom in the name of its king.

W
hen Mara, Brehon of the Burren, set off on 14 September 1519 from the law school at Cahermacnaghten to attend Mass at Kilnaboy Church, it was just another boring duty in her busy life as the king’s representative responsible for the maintenance of law and order in that kingdom in the mid-west of Ireland. Kilnaboy was not her parish church, but the Feast of the Holy Cross was of great importance there as that church held an important relic: a piece of the true cross itself, housed inside a gold shrine, heralded by the huge two-armed stone cross on the church gable. The attendance of the Brehon at the service would be expected by all the parishioners.

The fourteenth was a lovely, bright, very warm September day. Despite having to go to Mass on a Wednesday, her five scholars from her law school in the west of the kingdom were in a mood of wild excitement. It was unusual for them to be back in school before the end of September, but they had all agreed to start the Michaelmas term early on the promise of a fortnight’s holiday in the King’s palace in Thomond during the month of December. And so they had arrived back the evening before, two weeks earlier than usual and were still busily swapping stories about their summer holidays. Mara had worried they might resent the cutting short of their summer break, but now suspected that they were, in fact, pleased to be back in the companionship of their fellow scholars. She remembered her own days as an only child at her father’s law school, and how delighted she was when the holidays were over on the feast of St Michaelmas and the old stone walls rang once more with shouts and laughter.

Slevin, a thirteen-year-old boy from Donegal, was telling some outrageous story about a cattle raid in the mountains near to his home, casting quick looks over his shoulder from time to time and lowering his voice so that the Brehon could not overhear. She smiled to herself and reined back her mare, allowing them to gallop on ahead. Slevin, thought Mara tolerantly, came from a long line of bards and storytellers and she would drop out of earshot and allow him to embroider his story to suit his artistic talents while she enjoyed the scenery at a leisurely pace. Domhnall, her fourteen-year-old grandson, was listening with a grin puckering his lips, but the two nine-year-olds, her own son Cormac and his foster brother Art, were wide-eyed with astonishment. As was twelve-year-old Finbar from Cloyne.

September was a favourite time of the year for Mara. The hedgerows and ditches of the Burren were still full of summer flowers: deep-pink fragrant orchids and yellow hawkweed framed the tall, pure-white, five-petalled marsh maidens on the verge, and the fluffy pincushion flowers cast a purple haze over the fields. Here and there late frog orchids, tiny but vividly yellow, still crouched in ditches, and pale blue harebells arranged themselves, as always, to flower in harmonious contrast beside the clumps of crimson cranesbills.

And yet, despite the summer flowers and the warmth of the morning, there was a slight crispness in the air and already the haws reddened on the hedges and the immature, pale green globes of sloes peeped out from the yellowing leaves of the blackthorn bushes. Swallows, chattering ceaselessly, were beginning to cluster on tree tops and on the roofs of barns, and brightly coloured fieldfares fed greedily from the berries. The sun’s heat was like that of summer, but the year was moving inexorably into autumn and towards winter.

The air is very still; we might get thunder tonight, she thought, guiding her mare around a deep hole in the limestone road and walking for a while in the soft grass beside the ditch. There was a sharp sweet smell of water mint crushed by the hoofs and for a few minutes she rejoiced in it. The rounded swirling limestone hills, silver in the sunlight, and the majestic sweep of the stone-paved uplands were her favourite parts of the Burren, but there were times, like now, when she felt that the fertile valleys rivalled them as the most beautiful place on the earth.

‘Shall we take a short cut and ride across the fields down through Roughan, Brehon?’ called back her grandson, Domhnall, and she nodded her agreement. Domhnall was the eldest boy in the school and a great leader, a boy of brains and decisiveness. All the scholars looked to him for leadership. When the school was in session, the ancient enclosure which held the law school buildings and the fields around rang continuously with the cry of ‘
Doh-nall
’ and Domhnall always gave an instant decision. Mara was usually happy to back his judgements. He was very like her own father, Brehon of the Burren until he died, and she guessed that when her time came to retire or to die that Domhnall would make a worthy successor.

In any case, thought Mara, today he had chosen the route well. The fields were dry and Roughan itself was one of her favourite places. The whole hillside was covered with ancient tombs, the slabs of limestone gleaming in the sunshine as though they were made from marble. The place had a special feel of old times, of continuity with the past, of sacred ritual.

‘The church bell,’ shouted Slevin, interrupting his saga, and Mara was roused from her ponderings about the race of giants who must have built these monuments and lifted the flat slabs to make the sides and tops of those wedge-shaped tombs. She shook her reins and joined her scholars.

‘No hurry,’ she said. ‘Ride sensibly. We have a good quarter of an hour before the service starts. They ring the bell early here so as to alert the pilgrims who are staying in the inn over by the river.’

The church was packed by the time they arrived. She spotted many familiar faces, including that of Ardal O’Lochlainn, her closest neighbour, and friend for … for forty-six years, she thought with a slight feeling of shock. Ardal was a
taoiseach
(chieftain) of his clan since he was a very young man, a wealthy landowner and breeder of fine horses. He lived alone in the tower house of Lissylisheen, a quarter of a mile from the law school. For years Mara had tried to find a suitable wife for him, but now that he had turned the age of fifty she had given up in despair. He had become desperately religious, attending Mass on a daily basis, and had recently returned from a pilgrimage to the shrine of St James of Santiago, followed by a visit to Rome to see the Pope and the wonderful churches there. She tried to catch his eye, but he was gazing reverentially up at the small figurine of the crucified Christ, made from gold and alabaster, which hung beside the altar.

Mara gave up and exchanged nods and smiles with other neighbours. The church was full. As well as the local people of the Burren, there was, as usual, a group of badge-wearing pilgrims, come to pay homage to the relic; just six of them today – three women and three men. Most, thought Mara, looking at them with interest, would probably round off their pilgrimage within a few days with a visit to the Aran Island – Aran of the Saints, it was known. If so, they would leave Kilnaboy the following day, take a boat from Doolin to cross the narrow strait between the island and mainland, and then would stay there for another few days, visiting the various shrines and praying at the seven churches. And after that they might go to Galway and take a ship to Spain.

‘The three ladies are from Wales,’ murmured Nechtan O’Quinn in her ear as he slid to his knees beside her. He crossed himself ostentatiously and muttered a prayer. Mara waited. Nechtan O’Quinn, lord of the tower house just behind Kilnaboy Church, was a distant relative of her husband, King Turlough Donn O’Brien. He was a great gossip. She ought, perhaps, not to encourage him, but she was curious about the three women. Many pilgrims came to Kilnaboy month after month in order to worship the relic of the true cross, but these were the first women pilgrims that she had seen.

‘The small, prim-looking one is a prioress,’ whispered Nechtan. ‘She comes from a convent near to the shrine of St Winifred in Wales. The other two ladies are her sisters. The older one, the big fat one, is a widow and the younger one – looks like a daughter, but she’s a sister, too, apparently – very shy girl, terribly scarred, as you can see, after some accident when she was a child, I understand.’