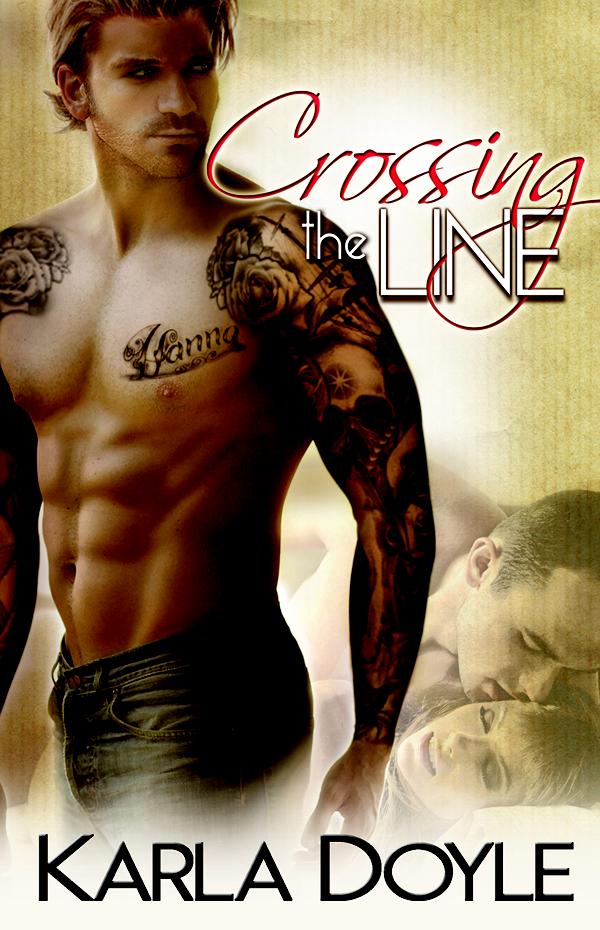 Ten years ago, Hanna danced with two guys at a bar. The one she went home with became her husband, a man who still brings love, lust and adventure to her life, daily. When Derrick suggests inviting the other man, his longtime best friend, Jeremy, along for a sexy weekend getaway, Hanna can’t help worrying. Nor can she resist what will undoubtedly be the hottest birthday party ever.

Everything would’ve been fine if they’d had their fun that weekend, then gone back to normal.

But they didn’t. And things will never be the same—for any of them.

Author’s Note: Crossing the Line is a dark contemporary romance that contains explicit sex and mature situations that may not be comfortable for all readers.

Without these people, this book would still be sitting in the half-finished folder.

For my hubby, Todd, who supports and believes in everything I do, wholeheartedly. I love you forever.

For Amanda, my amazing (and incredibly tolerant) bestie. Thank you. For everything, but mostly for making me laugh. I’ll never be able to look at thick, sturdy carrots without hearing your voice. I don’t ever want to do a book without you.

For Andie. You keep me sane, and we both know that’s no small task! I’m so thankful fate put us together in NYC and you’re part of my life.

To Skye—thank you for answering my many questions and holding my hand through this entire process. You’re a fantastic editor and a lovely friend.

Thank you, Emily, for the fabulously hot cover. I can’t wait for you to design another.

Thanks also to Leigh, Gwen, Claire, and Em. Much gratitude, all.

Other Books by Karla Doyle

Excerpt from Body of Work by Karla Doyle

“Fucking ties. What idiot invented these things?” Derrick snapped the strip of gray silk from its stranglehold around his neck. “To hell with it, not doing it,” he said, launching the thing at a garbage can.

His best friend Jeremy raised his dark eyebrows but he left the tie where it’d landed. “I have a solution. We pretend I won the coin toss that night. I get the girl, you get to avoid the marital noose.”

“Yeah, not happening. Hanna’s all mine and that’s the way it’s gonna stay, ’til death do us part. Longer than that if my deal with the devil holds.” He nodded at the can. “Grab that stupid fucking thing for me. I’ve got an angel to marry.”

Took a few more tries, a hell of a lot of cursing and some help from his best man, but he won the battle of the Windsor. Didn’t mean he liked it though. He slid two fingers under his collar and popped the top button on his shirt. A little breathing room, at least. “I can’t believe you wear one of these every day.”

“You get used to it,” Jeremy said, cinching his tie with ease.

“Not this guy. I’ll stick with t-shirts and hardhats.” He slid on the black jacket that completed the monkey suit he’d been assigned and checked out the results in the mirror. “But I do make this shit look good.”

Jeremy laughed until Derrick made a beeline across the large, sunshine-filled room and opened the door. “Hey, where’re you going—we’re supposed to wait here for the minister.”

“One of her parents catches you and you’ll be out of order for the wedding night.”

“Not a problem. I’ve only been caught once, and that was by the woman I’m going to see.”

Derrick nodded his thanks and stepped into the main floor of the Collins’ house, Hanna’s childhood home. The place was a mansion compared to the hole-in-the-wall house by the tracks where he’d grown up. If he’d known that night two years ago that Hanna came from money, he might’ve handed off the opportunity to ask her out to Jeremy, despite winning the coin toss. Derrick didn’t date princesses. Didn’t fuck them either. Until Hanna—his first and last. His forever girl.

Thanks to the ultra-plush carpeting that ran through the house, nobody heard him climbing the stairs. Or walking down the hall toward the last door on the left, Hanna’s old bedroom. He’d have been happy to make things legal at some chapel in Niagara Falls, where she’d made him the happiest man alive by accepting his proposal.

But deny Hanna the pretty, garden wedding she’d dreamed about and deserved? No way. So here they were. And here he was, three steps from his bride-to-be’s half-open door.

“It’s not too late to call it off.” Mrs. Collins’ voice, in its usual, judgmental tone.

“Hanna, you need to listen to me.”

All the muscles in his body seized. If anybody walked out of one of these second-floor rooms, he was fucked. Because he couldn’t move. All he could do was listen, same as the woman he loved had just been ordered to do.

“Your dad and I know why you’re doing this, marrying a scruffy, tattooed ruffian like Derrick.”

“Because I love him. So glad you figured that out after almost two years.”

With that, he could move again. And he did, closing the distance to the door by half.

Abigail Collins
tsk
ed, loudly and disapprovingly. He could picture the expression on her face. Sour, her favorite mask whenever he was around.

“You don’t love him, you’re infatuated. He’s dirty and dangerous and it’s exciting. But the excitement will fade, darling girl, and then you’ll be stuck. Tied to a horrible family and a husband who’ll have to go on disability or welfare when his body gives out because he has no other prospects beyond heavy lifting. Then what? You’ll watch him drink himself into oblivion, the way his father always does? Maybe while you chase a couple of scruffy, disrespectful children around a ramshackle apartment?”

“Hanna.” Abigail’s voice had softened. “Let me tell the minister there won’t be a wedding today. You can move back home immediately and, once you’re settled, move on with the right kind of man. Like that Jeremy Cruz. Now he’s a catch. Nice short hair and always clean-shaven—now he’s a handsome man who’ll make beautiful children. And he’s from a lovely family, making a good career for himself. Nothing like—”

“Hanna Marie Collins, you mind your foul mouth. You see the horrible influence he’s had on you?”

Oh yeah, now he could move. To right outside that door, should his newly foul-mouthed fiancée require backup.

“You need to listen to
me
. You’re right, being with Derrick is exciting, maybe even a little bit dangerous sometimes. And maybe that’ll fade. If it does, I don’t give a damn. That’s one tiny part of him, of why I love him. You don’t know him, all you see is the superficial stuff. Yes, he has tattoos and a motorcycle and he operates a jackhammer instead of sitting behind a desk. And yes, his dad is a piece of shit, but Derrick’s not like his asshole father, just like I’m not like my giant bitch of a mother. So you listen to
me
, Mom, because this is the last time I’m having this conversation with you. I love Derrick and I’m marrying him. Today. I can do that in your backyard with all the pretty fixings that’ll impress your friends, or in a two-minute long, late-night service in a Niagara Falls wedding chapel. Your call.”

Derrick backed away even quieter than he’d approached. His strong, beautiful princess didn’t need any backup. Her parents were right—she was too good for him. Could do fifty times better. One hundred times. Didn’t matter, because she wanted
him
. They were going to bed tonight as husband and wife. After which he’d spend every day of his life worshipping her and never letting her go.

“I want to talk to you about something.” So much for thinking a while before saying anything. When his wife walked through the door in that short dress and high-heeled sandals that showed off her sexy legs, Derrick’s second brain took over. All patience and planning went directly out the kitchen window.

“Sure, shoot.” Mid-afternoon sunshine glinted off Hanna’s long, auburn hair, giving her a golden, angelic aura. The hottest angel he’d ever seen smiled over her shoulder while loading the groceries into the fridge. On the counter sat a bag of thick carrots, a cucumber, a zucchini. Innocent vegetables, normally. Right now they all reminded him of cocks. And Hanna, deep-throating said cocks, which was one helluva smokin’ visual.

“I used your computer while you were out.”

“Is yours screwed again? Maybe it’s time you got rid of it and bought a new one. We can take some money from our savings account.”

The only word that really registered was
screwed
. Add that to the stuff on his mind and the hint of ass he saw when she bent, and he couldn’t have stopped this conversation if he tried. “I was looking for a link to that little resort we talked about a few days ago. I checked your browsing history.”

“Havenbrook? Did you find it—if not, I jotted it down.”

Fuck, he was sweating, had a first-class woody, and she didn’t have a clue. “Yeah, I got it.”

“Great.” She pushed a carton of eggs into place, closed the door and turned. “So what do you think, should we book a romantic weekend?”

“I wouldn’t say
a lot
.” She must’ve been blushing pretty damn hard for him to see it through her summer-tanned skin. She toyed with the bottom of her dress, hiking it higher up her thighs until a glimpse of white panty showed. Teasing him, whether consciously or not. “No more than usual.”

“I watched them,” he stepped toward her, “the videos saved in your favorites.” Another step and she was within touching distance, the heat between them flaring. “Did you get yourself off while you watched them?”

“Do you want to watch them with me right now?” Sparks skittered along his shoulder where her fingernails dragged a line. Her palms slid down his bare chest, into his shorts, and she smiled at what she found. “Mmm, rock hard—perfect for sucking.” She pulled her hand out. Tortured him further by licking her fingertips. “I haven’t come yet today. I’ve been waiting for you, like you told me to.”

Eight years of marriage and things had only gotten hotter between them. This morning, he’d woken her by licking her, taking her to the edge but not finishing the job. Then he’d ordered her to suck him to the same point. Made her promise she wouldn’t come until later, and he’d do the same. Delaying the gratification was one of his favorite games to play with her. The more they stoked the fire throughout the day, the wilder things got when they let loose. But the blue balls in his shorts were probably to blame for some of the stuff going through his head this afternoon.

“You cue up a video,” her tongue slid along her plump bottom lip, “and I’ll grab a few things from the bedroom.”

So they could act out a three-way scene, something they both loved doing. But they could do better. “Not yet, I still want to talk to you.” He hiked her dress up to her waist and slid his hand in the front of her tiny panties. So wet for him, for what they did to each other. “The videos you watch, the stuff we pretend—we can do that if you want. Really do it.”

The Hazards Of Hunting A Duke by London, Julia
A Nice Little Place on the North Side: Wrigley Field at One Hundred by Will, George
When the Heather Blooms by Gwen Kirkwood
Whiplash by Yvie Towers
Baseball Flyhawk by Matt Christopher
The Midnight Star by Marie Lu
This Time by Ingrid Monique
The Marquess Who Loved Me by Sara Ramsey
Lady Bag by Liza Cody
Smoke in the Room by Emily Maguire
Our partner