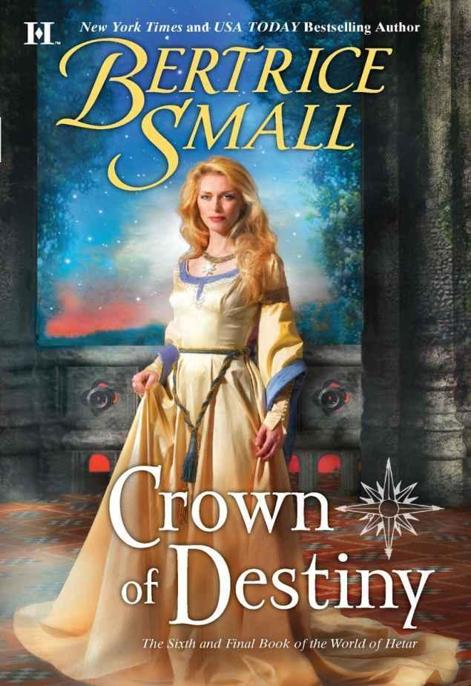 --
Publishers Weekly
on
The Sorceress of Belmair

"The third in the World of Hetar series has plenty of political intrigue, some fantastical characters, and lots of Small's unique brand of hot, boldly descriptive sex."

--
Booklist
on
The Twilight Lord

"Readers who enjoyed the first in what now promises to be a new series will devour Lara's latest adventure."

--
Booklist
on
A Distant Tomorrow

"Small wows with a brand-new example of her creativity and masterful storytelling!"

All the Sweet Tomorrows

This Heart of Mine

A Memory of Love

A Moment in Time

The World of Hetar now is done.

Hetar at last will meet its fate.

But Lara and Kaliq prevail.

For them the light will never fail.

HE HAD KILLED HER WITH HIS BARE HANDS. ACTUALLY he had used only one hand. His long elegant fingers closing about her slim white throat, squeezing, squeezing, until the terror in her dark eyes had faded away to nothingness. She had failed him. He had forgiven her the first time. And the second. But when a third mating season frenzy had come upon him, and she failed yet again, there had been no other choice open to him. Her delicious darkness had attracted him, but she was nothing more than a fertile field in which to plant the seed that would become his son. And after the child was born he had intended killing her anyway.

Now at least he would not have to listen to her foolish ambitions. Or her harping at him to leave the Dark Lands and go out to conquer Hetar. She had never understood that for his conquest to succeed they must be patient, and rebuild his armies. They had time, and this time the darkness would overcome the light. But Ciarda had never accepted the fact that women were for nothing more than pleasures and babies. She wanted to be part of his eventual conquest, foolish creature! Her inability, however, to give him his heir had been her downfall. He had thought she was the one. She had believed she was.

And once her body had gone limp in his grasp he had personally carried the lifeless form from her bedchamber halfway across the bridge leading to his House of Women. Then with a final look at his half sister's remains he dropped them over the balustrade of the span into the bottomless ravine. Returning to his Throne Room, Kolgrim, the Twilight Lord, called Alfrigg, his chancellor, to him.

"Ciarda is no more," he announced to the dwarf when Alfrigg stood before him.

"She was not the one," Alfrigg said quietly. "Will you not now look in the Book of Rule to see what it says to you."

Kolgrim nodded. "Open it," he said.

And going to the stand that held the Book of Rule, the chancellor opened it reverently. Then he stepped back to allow his young master to see what was written.

Once he had quickly scanned them, Kolgrim beckoned Alfrigg over to see the words. Very few could read the ancient tongue so beautifully inscribed upon the pages. Twilight Lords read them instinctively. Alfrigg had been taught the language by the former Twilight Lord, Kolgrim's father, because he had earned his master's trust when no one else had.

The Book of Rule was magical. It was constantly adding clean pages upon which the words were written by an unseen hand. The words recorded the reigns of the Twilight Lords past and present. It offered advice and suggestions to its master. Today it said,

She who was good for naught but pleasures has at long last been disposed of as was right and proper. Now the wait begins for She who will produce the next Twilight Lord. When it is time, the book will advise you on which daughter from the Hetarian House of Ahasferus is to be chosen. Descended from Ulla, her dark womb will bloom for the descendant of Joruun, and your line will be never ending. Now cultivate patience, Kolgrim, son of Kol and Lara. Use this time well so you may be ready.

Alfrigg looked to his master, nodding. "This is good," he said. "Very good."

"Have I spawned any daughters with my women?" Kolgrim asked the dwarf.

"Kill them, and kill the mothers, too. I want no weeping women seeking revenge or spitting curses at me. And if any are with child, kill them, too. I will use my magic to close the wombs of those remaining, and any new women I take. I will not have my son threatened by a female sibling as my brother and I were threatened. I shall have but one child, a son, by she who is fated to be my mate."

"Excellent, my lord, excellent," Alfrigg approved. "Your father would be so very proud of you."

"But not my mother." Kolgrim chuckled. "That beautiful, impossible creature of blinding light is the only one who can defeat me."

"She will not this time," Alfrigg said with surety.

"How can you be so certain?" Kolgrim demanded to know.

The dwarf shook his grizzled head. "Something deep down within me tells me so, my lord. It is not logical, and I cannot explain it. But you will win this time. I know it! Besides, you are your father's son. There is nothing of Lara in you."

Kolgrim smiled a rare soft smile. "I have her golden hair," he said. "I might have magicked it to be as dark as my father and brother. However it amuses me to keep it light. It reminds me of Lara."

"Why would you want to be reminded of your mother?" Alfrigg asked.

"Is it not wise, Alfrigg, to know your enemy before you attack that enemy?"

The dwarf shook his head in wonder. "There is no sentiment in you, my lord. You are wise beyond your years. Thank Krell your father was imprisoned, for if he had not been I do believe that you and he would have fought over the Dark Lands. That is where the forces of the light have erred in their judgment. They believed by imprisoning your father they stopped what is inevitable. They believed that you and your brother would fight one another for the crown of these lands thus weakening us further for centuries to come. But I hid you both in different places to keep you safe. You knew nothing of your heritage, my lord, until the Darkling Ciarda, your half sister, told you. I never meant for you and your sibling to know one another at all. Those who fostered you both did not know your lineage. I intended to choose one of you to reign when you reached maturity."

"But Ciarda spoiled all your plans with her ambition," Kolgrim said.

Alfrigg nodded. "Aye, she did, and the chaos she caused might have kept the Dark Lands leaderless for years, foolish creature she was."

"Who would you have chosen, Chancellor?" the young Twilight Lord asked candidly. His dark eyes danced with wickedness.

"My lord!
What a question." Alfrigg chuckled. "Once I came to know you both, there was only one choice possible. You, Kolgrim, son of Kol! Your twin brother was a crude, ignorant bully. Power, wine, pleasures, were all he sought, or wanted. That is why the Darkling Ciarda sought to use him against you, against me. Now she is dead. Your brother is imprisoned with your father, and you, my lord, will triumph eventually."

"You are certain of this?" Kolgrim demanded. "For if you are wrong, Alfrigg, I will slay you without a moment's hesitation before I meet my own fate."

"My instinct for this is what keeps me alive, my lord," the dwarf said.

"I am not a patient creature," Kolgrim said.

"Then you will have to cultivate patience, my lord. Your reward will be worth it. I swear it!" Alfrigg insisted to his master. "You are he who is meant to triumph!"

En el blanco by Ken Follett
Resolutions by Jane A. Adams
The Biker (Nightmare Hall) by Diane Hoh
Mrs Zigzag: The Extraordinary Life of a Secret Agent's Wife by Betty Chapman
The Computers of Star Trek by Lois H. Gresh
Caching In by Tracy Krimmer
The Finer Points of Sausage Dogs by Alexander McCall Smith
Enemy Among Us-A Jordan Wright Thriller by Randy Reardon
The Wedding Party by Robyn Carr
Sword in Sheath by Andre Norton
Our partner