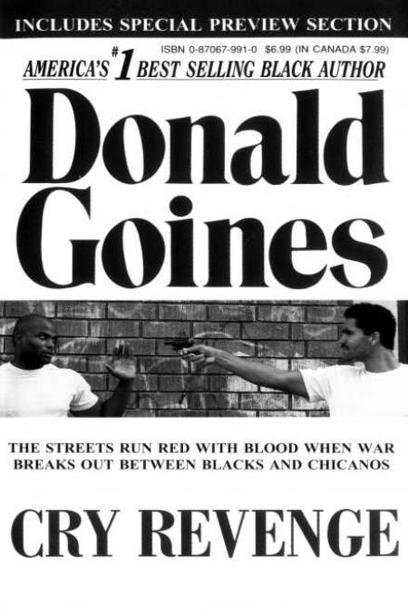 "A flashing talent straight from the streets of the lost."

"After Chester Himes, the "Serie Noire" could not overlook Donald Goines, the most interesting black crime writer in many years. Goines writes with guts 'n blood."

"What is great about Goines is that you feel you've become more intelligent once you have read his stories of pain and grief. His stories almost have an ethnographic value."

..dives into the hellish world of the ghetto dear to Chester Himes, minus the humor. Policemen shoot before asking questions. Fear and hatred can be read on all faces."

Jay caught Maria from behind. As she opened the door he grabbed her around the neck and pulled her back inside the apartment. Even though he had her neck, he didn't stop her from screaming until he got her back into the apartment. He didn't even remember sticking the long-bladed knife into her back. When she fell back into his arms blood gushed from the back wound, covering his hands and arms. The checkered white jacket he wore was covered with blood from the sleeves onward.

The other two men in the apartment didn't even realize that Jay had stabbed the woman until she screamed over and over again, "George, George, he's killing me!"

A friend indeed will help a friend in need. So saying, I'd like to say my thanks to some friends of mine who have helped me while others turned their backs. At the top of the list is Levern Sawyer and his wonderful wife Pearl. Next I'd like to thank Brother Auther, or better known as Deek Reed. Also on the long list would be Kenneth Heggerman and his Lady Rickie. Last but not least, I'd like to say thank you to Frank Usher, better known to his friends as Frank Nitty. While these are not all of the people, they are some of my closest friends, or rather people I'm proud to think of as my personal friends.

IN THE BACKYARD of the white frame house was sand. Brown, light sand that blew in from the distant desert. New Mexico was more desert than anything else, yet it still possessed a beauty that would be hard to find elsewhere.

Curtis Carson stood up and put his hands on his hips as he shook out the kinks in his back. He stared down at the dice that his friend Dan Lewis shook.

"Seven!" Dan yelled as he rolled the dice out. When eight showed, he snatched them back up quickly. "Seven," he yelled again, this time taking his time and trying to roll the dice gently on the sand. Again the dice came up with eight.

"These mothafuckers ain't got nothin' on them but eights," Dan cursed loudly. Then he shook the dice slowly, holding them back near his ear. He grinned up at Curtis, who picked up the money he had made after jumping eight. "Now," Dan yelled, "I want to see some fuckin' sevens on these mothahuppas."

The two Mexican men kneeling in the dirt watched Dan closely as he shook the dice. The stouter of the two tossed his money down beside Dan's. "Okay, momma," he said, drawing the words out, "you're faded."

Dan stared down at the ten-dollar bill lying in the dirt. He grinned up at the men, revealing good teeth that needed some cleaning. "Now that's the way I like to get my money on, with no problems." He took his time, then quickly released the dice. The dice hit the dirt and began to spin around like small tops.

Before the dice could stop spinning, the Mexican who had faded the money reached over and snatched the dice up from the dirt. "Goddamn, Dannie, how many times we got to go over it! Ain't goin' be no spinning the dice in the sand!"

"The sonofabitch," the other Mexican said, loud enough for all the men in the game to hear. "The gringo bastard must think we are the fools, huh?"

"Hey, amigo," Curtis said smoothly, "sometimes people forget, you know. Ain't nobody been hurt, the dice were caught, so let's not get nasty about it, okay?" His voice had remained low, but there was no doubt about the authority in it. The tall black was used to giving orders.

The slim Mexican who had spoken glanced up from his kneeling position. "Hey, my man, how many times do we have to pull this dude's coat about tryin' to shoot that shot on us, huh?"

Curtis shrugged his wide shoulders. "These things happen, Pedro, you're hip to it. The guy is used to firin' the craps that way, so all at once we want him to change his style of shootin' 'cause you guys say he's gettin' slick. So the guy tries and changes his style of shootin', but at times he forgets, you know, and goes back to firin' the craps the way he's used to shootin' them. That's all it is."

Pedro glared up at Curtis, but prudence warned him not to push it. He glanced around and caught his partner's eyes, then glanced down at the money in the pot. His actions were obvious to everybody in the game.

Before the other Mexican could pick his money up out of the dirt, Dan picked up the dice and rolled them out. "Seven, baby," he yelled, as the craps slowly rolled across the dirt.

Before the heavyset Mexican could follow his partner's directions, the dice had rolled out and stopped on a seven. Pedro let out a curse and glared angrily at the dice shooter.

"Seven, and we have a winner," Curtis yelled out, making it clear to the angry Mexicans that it had been a fair roll.

Pedro coughed and cleared his throat. "Yeah, Dannie boy, you really think you're cute, don't you, my man?" His jet-black eyes were flashing dangerously as he tried to control his temper.

Dan, a tall, slim, brown-skinned man in his early twenties, smiled coldly. Though his lips were pulled back in a smile, his dark eyes were bleak and deadly as he watched the Mexican out of the corner of them.