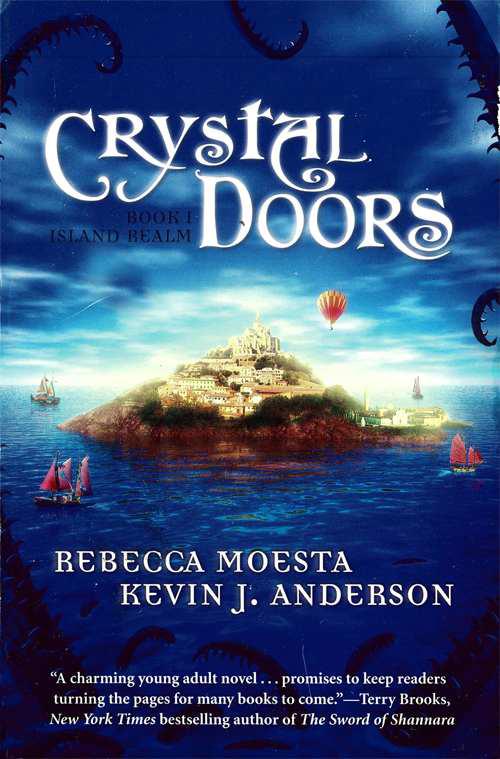 John Silbersack and Robert Gottlieb of the Trident Media Group for supporting this project from the beginning.

Jennifer Hunt and Phoebe Sorkin Spanier for their enthusiasm and insightful editing.

Our families for putting up with our eccentric schedules and for introducing so many new people to our books.

Igor Kordey for his brilliant concept artwork and imaginative designs.

Sarah and Dan Hoyt and Rebecca and Alan Lickiss for local cheerleading.

Dean and Gerda Koontz for years of invaluable advice.

A WARM SALTY BREEZE ruffled Gwendolyn Pierce’s blond hair as she stared across the ocean. She let her mind sail all the way to the horizon. Anything seemed possible out there.

Gwen squinted against the golden flare of sunlight reflected from the waves. For centuries, the lure of the sea had cast a spell over mankind. The briny waters held beauty, danger, and mystery in equal portions.
Sea monsters. Explorers sailing off the edge of the world. Ghost ships. Undersea kingdoms.

Intrepid sailors crossed the uncharted waters to find adventure in distant lands, exotic ports with new goods to trade. Fishermen hauled their catch from the bountiful waters. Artists, writers, and philosophers drew inspiration from the restless depths. The potential of the seven seas seemed limitless.

“You kids hungry yet? Or do you want to hit the rides right away?”

Gwen lowered the brochure-map of the Ocean Kingdoms Learning Center and Amusement Park. “I want to see some exhibits first, Uncle Cap.”

Dr. Carlton Arthur Pierce — nicknamed Cap for his initials — regarded his niece with affection and good humor in his hazel eyes. “Don’t forget to have fun, too, Gwen. You’re so serious.” The brilliant yet eccentric former archaeologist had given up a day of his strange experiments with crystals so they could all visit Ocean Kingdoms.

“Of course I’m serious.” She drew her slender form up to its full height. “I’m going to be an oceanographer or marine biologist, maybe even study at The Scripps Research Institute.” A love of the sea, and water in almost every form, was one of the many things Gwen’s mother and father had passed on to her. In the two years since her parents’ death, Gwen had become increasingly serious, but she couldn’t help it. Only by immersing herself in study did she find refuge from her feelings of loss and grief. But today she was supposed to have fun. She forced energy into her voice. “In other words, it’s never too early to start learning!”

A suntanned hand yanked the map from her grasp. “Sheesh, Gwen — take off the Spock ears for a while, okay?” Her cousin Vic grabbed her by the shoulders and turned her in a slow circle so she could see the roller coasters, flume rides, concession stands, and gift shops. The air smelled more of popcorn than salty ocean. “It’s an amusement park, so let’s try to be amused.”

“Actually” — she pointed to the brochure — “it’s a Learning Center, too.”

“Come on, Doc. Play now, work later.” Vic used the nick
name he had given her when, at age six, she announced she was going to be “Dr. Pierce” someday, just like her dad. Now Vic looked longingly at the rides. “Here’s a plan: we get all sticky with cotton candy, wash off with a drench on the Raging Riptide, and then stuff ourselves with corn dogs and giant pretzels. You know, have some
fun!
Then, if there’s time, we can look at an exhibit or something.”

“Goof off all day?” Gwen planted her sandals firmly on the turquoise-painted concrete. “I’m the oldest, and Uncle Cap said I get to choose first.”

Her cousin made an exasperated sound. “Sheesh. Older by five hours. Big deal. That’s a trivial percentage of fourteen years, you know, so don’t try to pull rank on me. Besides, I’m bigger than you are.” Years of competitive swimming had made the cousins equally lean and fit, but in a recent growth spurt Vic had grown a few inches taller than Gwen. He pointed to a flume ride that looked like a three-story-tall cement wave frozen in place. At its base lay a glittering sapphire pool. “Doesn’t that look cool?”

“It looks
wet.”
Gwen pulled herself free. “The exhibits will be more —”

Dr. Pierce broke in. “I’m the captain of this ship, and I propose a compromise. I say we grab some churros from this vendor here and eat them on our way over to the South Pacific Kingdom. Then we ride the Ripple Conveyor through the underwater tunnel in the aquarium.”

Gwen retrieved the wrinkled map from her cousin. “If that’s the aquarium with all the miniature volcanoes around it —I’m in!”

“Yup, you just might be. If you don’t climb out of your rut, I’ll make sure you see plenty of fish.” Vic cracked a wicked smile as his father handed them each a fried doughnut stick. Vic waved his churro in front of Gwen, ignoring the sugar that showered onto his black Mad Scientists’ Union polo shirt. “Mmm, the food of the gods. Cinnamon and fat and about a million empty carbs.”

Gwen primly stepped around her cousin. Although Vic and his dad finished their treats in two minutes, she took small bites as they walked up the gentle slope toward the aquarium.

“Hey, I wonder if Ocean Kingdoms has a suggestion box,” Vic jabbered. He often made oddball comments that came out of nowhere. “Wouldn’t it be cool if they’d let us use skates, bikes, or skateboards in here? We’d move faster and hit twice as many rides.”

Uncle Cap tapped a finger on his lower lip as he considered. “Think it through, Vic. There’d be more accidents, and that would increase the park’s insurance rates and lead to higher entrance fees. It could cause traffic-control issues, injuries, unfairness to the elderly or handicapped who might not be able to ride bicycles or skate. And if the park owned the equipment, there’d be problems like sizing skates and bicycles, equipment breakdowns, maintenance, providing safety gear and changing areas for the skaters. There are a lot of second-and third-order consequences.”

Gwen smiled; this was typical of her uncle. Once given a problem, Dr. Pierce would work at it until he found a solution,
often by instinct or by the seat of his pants. Vic and his father were similar in that. On the other hand, Gwen’s approach to problem solving was painstaking and methodical, though not always more successful. Since the mysterious car accident that had killed her parents, Gwen’s strategy of organization and structure had become a way for her to impose order on the world, to make sense out of life.

Because she had no other relatives, Cap — her father’s identical twin — had moved Gwen from Berkeley, California, to live with him and Vic in Hawks Hills near San Diego. Adding to the strange circumstances surrounding the deaths of her parents, Vic’s mom — Cap’s wife — had vanished a week later. No one seemed to know where she had gone.

Bound together by the unexpected tragedies, Dr. Carlton Pierce, Vic, and Gwen had formed a new family. For two years now, the “twin cousins” — born only hours apart on the same night — had been raised almost as brother and sister. They attended Stephen Hawking High School together and shared many of the same classes and friends.

“Maybe,” Vic said, unconvinced, “but we’d still get around a lot faster.”

Gwen turned her violet eyes to the sky, begging the heavens for patience. “What’s your hurry? Maybe walking is the best way to see the park.” Making a mental list, she ticked off the reasons on her fingers as she spoke, pointing to each digit in turn with her half-eaten churro. “One, most people here could use the exercise — think of all the calories in this food!” She gave the churro a twirl before tapping it to her second finger. “Number two, the designers of Ocean
Kingdoms spent millions of dollars developing its ocean theme, creating the whole illusion.”

“You mean like painting concrete blue, so that it looks, um, ‘just like’ water?” Vic gave a snort.

Gwen ignored his interruption. “If you rushed by, you wouldn’t get the overall effect. For example, as we move toward the South Pacific Kingdom, they gradually add more and more of the area’s distinctive culture.”

“Ooh-ooh! Volcanoes!” Vic pointed to a miniature cone-shaped mountain at the side of the path. It erupted every few seconds with “lava” that was really just water with a red light beneath it.

“See? If you took skates or a scooter, you’d miss a lot of the ambience,” Gwen said. “Like volcanoes.”

“And the shops.” Her uncle indicated the ubiquitous thatched huts with names like Easter Island Trader or Polynesian Playthings. “Merchants don’t want visitors going by too quickly.”

“Plus, there’s the island music.” Gwen waved her churro like a baton, pretending to direct the ukulele tune that drifted from the speakers hidden in the palm trees. Then she touched the churro to her third finger. “Number —”

“Seven?” Vic tried to derail her train of thought, a game he often played.

She shot him a warning glare.
“Three,
these people are on vacation. They come with families or friends to get away from it all. Walking from kingdom to kingdom gives them a chance to take their lives at a more relaxed pace.” When Vic mocked
her serious tone by playing an air violin accompaniment, Gwen rushed on to her next point. “Number —”

“Googol?” It was the biggest number Vic could cite, a one followed by a hundred zeroes.

“Number four.” She tried to wither him with the power of her eyes. “Amusement parks don’t have the capacity for all the visitors to be on rides or in exhibits at the same time. So walking disperses the crowds from point to point. Rushing faster only creates bigger bottlenecks and backups.”