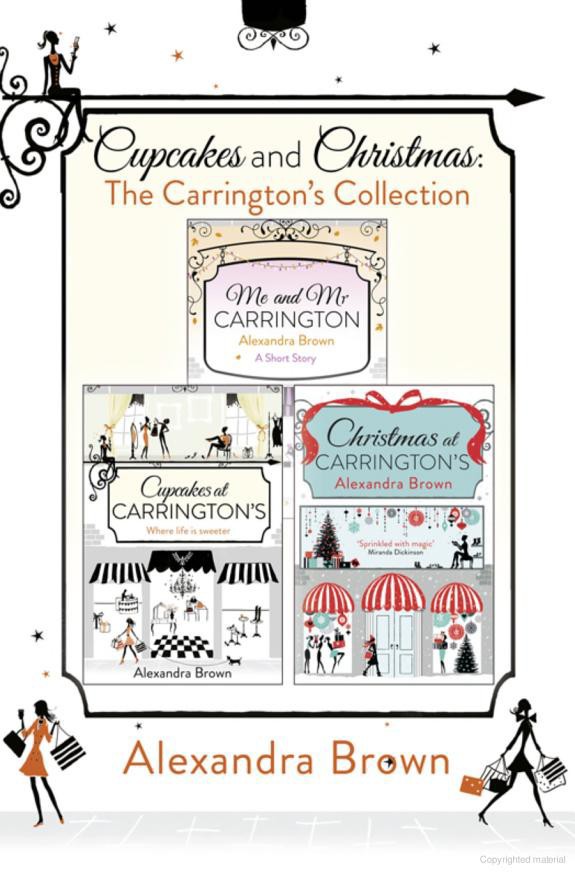 Me and Mr Carrington

For Paul and QT

In Conversation With Alexandra Brown

I
t’s Tuesday morning in Mulberry-On-Sea, and Eddie is glaring with disapproval at my New Look heels as I step inside the staff lift and close the metal concertina cage door.

‘You know I just saw Sam outside. That cupcake queen totally blanked me,’ he says, preening into the mottled mirror on the lift wall.

‘Oh you know Sam. She probably had her mind on other things like giant macaroon mountains or gold glitter sprinkles.’ The mention of Sam highlights my rumbling stomach so I make a mental note to pop up to her café on the fifth floor, Cupcakes at Carrington’s, for a red velvet cupcake with butter cream icing. My favourite. Mm-mmm. And a good catch-up on all the gossip of course. Sam overhears all kinds of stuff. When Cynthia from the florist down on Sunray Crescent was having it away with Trevor, the town sheriff, she was the first to know. Trevor’s sister is a regular in the café and blabs all the juicy details to her mate over a cream horn and a steamy hot chocolate. ‘I take it you had a good weekend?’ I add, glancing at Eddie in the mirror as I bouf up my shoulder-length brunette bob. Last night, I used those giant sleep-in rollers, but after getting caught in a sudden downpour on my way to work, it now looks more floppy spaniel ears than big hair fabulous.

‘Yes, so-so … went to an impromptu
Sex and the City
themed party on Sunday,’ he replies, in his best diva voice.

‘And let me guess, you were channelling your inner Samantha?’ I laugh, shaking my head. Eddie adores her character.

‘You know … your “Smith” – was he there too? Come on, tell all, you know you want to.’ I give him a playful nudge of encouragement. He hesitates.

‘Nope.’ He looks away. ‘But it’ll be Valentine’s Day in six weeks or so. And … well, if he doesn’t want to spend it with me then it’s his loss,’ he adds with a flourish, before pulling a face.

‘I thought you two were totally loved-up?’ I say,
steering the conversation away from the most romantic day of the year. It’s not that I don’t like being single. I do. Sometimes. And I’m only twenty-seven. But Valentine’s Day can be tricky. Especially when everyone else is bound to be whooping it up with ten-course taster menus followed by cosy strolls along the seafront under velvety moonlit skies, and I’m home alone with a bar of chocolate to keep me company. And unless my love life takes a serious upturn – I’ll be doing the same again this year. I think of the last Valentine’s Day I spent with Brett nearly two years ago, it was our third together. I’d felt happy and loved-up, blissfully unaware that I was going to be dumped within a few weeks. He left me for someone else – a tall blonde with big hair and a sylph-like figure compared to my average height and bootylicious curves, as Brett used to say. My heart constricts a little, but I’m over him. I force myself to concentrate on Eddie’s love life instead.

‘So what’s changed then?’

‘Well, not returning my calls for starters.’

‘I’m sure it doesn’t mean anything. He’ll probably call you today,’ I say, knowing how sensitive Eddie can be.

‘So what do you know then, Ed?’ I ask, quickly changing the subject. Eddie is the boss’s boy assistant – his BA. Unusual I know, but Walter Davenport, who’s the managing director of Carrington’s department store, where we work, didn’t earn his nickname ‘The Heff’, as in Hugh Hefner, for no reason. Whisper has it that after Walter’s wealthy heiress wife found out about his dalliance with yet another girl less than half his age, she imposed a lifelong ban on him having female PAs. This cued the arrival of Eddie, who is a voracious gossip
queen. Rather fittingly he’s privy to all kinds of useful –
and indeed sometimes useless but delicious anyway –
snippets of information.

‘Well you know me, never one for gossip,’ he says, perking up and smoothing an already immaculate HD eyebrow with his little finger, while I try and resist the urge to smile at his blatant delusion. ‘Anyway, enough about me. Although admittedly it is a scintillating subject.’ He pauses momentarily and places a hand on his pristine fitted jacket, as if he’s pledging allegiance.

‘Oh come on Ed. Don’t be such a tease,’ I plead, now dying to know what he knows.

‘
Weell
.’ He pauses for dramatic effect and a naughty smile dances across his lips. ‘You didn’t hear it from me, right?’ His eyes dart from side to side.

‘Of course. My lips are sealed.’ I make a quick zipping action across my glossed mouth before throwing an imaginary key away.

‘Seems The Heff has been getting very intimate with one of those über-swanky retail consultancies up in London. You know, the ones where they charge upwards of a thousand pounds per day to tell you what you already know. Twenty-seven phone calls in the last fortnight alone! Methinks he may be looking for a change of direction before winding down for retirement,’ he says triumphantly, just as the lift shudders to a halt, signifying our arrival at the next floor and stealing my moment to probe him for more details.

Eddie flashes a warning look in my direction as we simultaneously turn to face the cage door. The Heff is bent over right in front of us, busy tying the lace of his left brogue. Using both hands, I slide the door open, hoping it doesn’t get stuck again. Last week I was on my tea break, travelling to the café to see Sam, and ended up trapped on the third floor for nearly two hours waiting for Charles, our Rastafarian handyman, to come back from visiting his sister Esther in hospital and prise the cage door open for me.

‘Good morning, or is it afternoon yet?’ Walter guffaws. He makes the same joke every day. After returning to a standing position, he strides into the lift and turns to slide the door closed.

‘Morning,’ Eddie and I both say in unison as we shuffle backwards until we’re standing side by side behind him, breathing in the spicy aftershave fumes that permanently beat around his lofty frame.

‘Thank you Walter,’ I mutter, smiling to myself at his dated old-school charm. He’s like it with all the girls in the store.

‘Very good,’ I reply enthusiastically, even though we all know sales have dwindled dramatically throughout the whole shop for at least the last year or so. And the new superstore down on the industrial estate hasn’t helped matters, either, not when you can get a whole new wardrobe, with accessories, for less than fifty quid in there. ‘The new luggage line is doing exceptionally well. We’ve sold two pieces already. The local designer has delivered a few more of her handmade exclusive silk purses in candy pink, which I’m hoping to sell as Valentine gifts. And I can’t wait for the limited edition Chiavacci Kelly bags to arrive from Italy.’

‘Jolly good. Keep up the good work. The Chiavaccis could make all the difference. We’re lucky to be getting them – only made ten: six in the US, two in Dubai … and us.’ The Heff slides a hand through his silver hair and, puffing his chest out triumphantly, he starts rocking gently on his heels, stretching his braces out in front of him. I sneak a sideways look at Eddie, who pokes his tongue out and then quickly retracts it, just like a lizard. I try not to laugh as the ancient lift creaks through a few more floors. ‘That’s us,’ The Heff booms, slapping his hands together and making me jump. He flings the cage door open and, like an athlete off the blocks, wastes no time in setting off. I let out a little sigh of relief. Eddie dashes out behind him and then pauses momentarily to look back at me over his shoulder.

The Chronicles of Heaven's War: Burning Phoenix by Ava D. Dohn
The Guild by Jean Johnson
Forsaken (The Djinn Wars Book 5) by Christine Pope
The Book of Pirates and Highwaymen by Cate Ludlow
Rugby Rebel by Gerard Siggins
Los hijos de Húrin by J.R.R. Tolkien
Before Sunrise by Diana Palmer
The Extinct by Victor Methos
Petite Mort by Beatrice Hitchman
The Conquering Sword of Conan by Robert E. Howard
Our partner