Curse of the Arctic Star 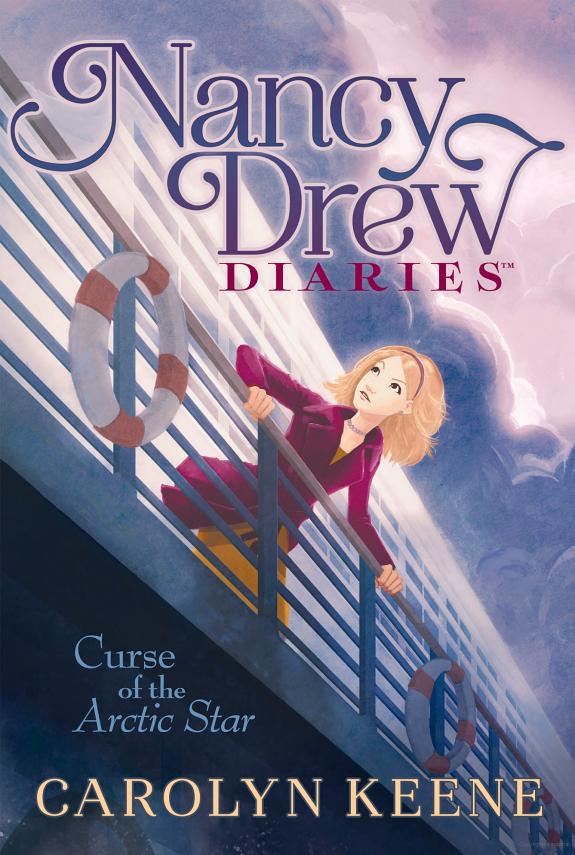 CHAPTER ELEVEN
Putting the Pieces Together

Strangers on a Train
Excerpt

I DIDN’T ACTUALLY BELIEVE THAT A
luxurious cruise ship could have any
real
mysteries
onboard.

Boy, was I wrong!

The minute we set sail, we were in mysteries up to our ears. I
don’t think I’ll have any time to enjoy Alaska, and I’ve always wanted
to visit the Last Frontier and pan for gold or even go dog
sledding . . . .

“NAME AND CABIN NUMBER, PLEASE?” THE
efficient-looking porter asked, reaching for the large green suitcase sitting on the dock beside me.

“Nancy Drew. Hollywood Suite.” I shrugged and shot a glance at my two best friends. “That’s all they told us—I don’t know the number.”

The porter smiled. He was a short, muscular man dressed in a tidy navy jacket with silver piping and matching shorts, with a name tag identifying him as James. Every employee of Superstar Cruises wore some variation on that uniform, from the driver who’d
picked us up at the Vancouver airport to the woman checking people in over at the gangway.

“That’s all I need to know, Ms. Drew,” James said. “The Hollywood Suite doesn’t have a number.”

I watched as he scribbled the letters HS on a bright purple tag, then snapped it onto the handle of my bag. He lifted the suitcase as if it weighed nothing, even though I knew that wasn’t the case. I’m no fashion plate, but a girl needs plenty of clothes for a two-week Alaskan cruise! Then he set my bag on a metal cart along with at least a dozen other suitcases, trunks, and duffels.

Meanwhile my friend Bess Marvin was staring up at the ship docked beside us. “Wow,” she said. “Big boat.”

“Major understatement,” I replied. The
Arctic Star
was absolutely massive. We don’t see too many cruise ships in our midwestern hometown of River Heights, but I was pretty sure this one was even larger than most.

Just then I heard a scuffle nearby. “Hey, give that back—I don’t want to check it!” George Fayne
exclaimed as she grabbed a grungy olive-green duffel bag out of another porter’s hand.

George is my other best friend. She’s also Bess’s cousin, though most people find it hard to believe they’re related, since the two of them couldn’t be more different. Exhibit A? Their luggage. George’s consisted of that ugly duffel, a sturdy brown suitcase that looked as if it had been through a demolition derby, and a plain black backpack. Definitely the functional look, just like her short dark hair, faded jeans, and sneakers. Bess, on the other hand, had a matching set of luggage in a nice shade of blue. Tasteful and pulled together, like her sleek, shoulder-length blond hair and linen dress.

The porter took a step back. “Of course, miss,” he told George politely. “I only thought—”

“Relax, George,” Bess said. “I think you can trust him to get your toothbrush and your days-of-the-week underwear onboard safely.”

“My underwear, maybe.” George already had the bag unzipped. She scrabbled through the mess inside
and finally came up with her laptop and smartphone. “This stuff? I trust no one.”

Bess snorted. “Seriously? We’re going to be cruising the gorgeous Alaskan waters surrounded by amazing scenery. You’re not going to have a lot of time to look for cute kitten videos on YouTube, you know.”

“Maybe not,” George retorted. “But if we need to research something for Nancy’s—”

“Hi, Alan!” I said loudly, cutting her off as I noticed a guy hurrying toward us.

“It’s my lucky day!” the guy announced with a big, cheerful grin. “I found my sunglasses. I must’ve dropped them when we were getting our stuff out of the airport van.” He waved the glasses at us, then slid them on and wrapped an arm around Bess’s shoulders. “Actually, though,
every
day is my lucky day since I met Beautiful Bess.”

George rolled her eyes so hard I was afraid they’d pop right out of her head. “Sooo glad you found your shades, Alan,” she said drily. “I was afraid you’d be so busy searching you’d miss the boat.”

I hid a smile. About a month earlier, Bess and George and I had been having lunch at one of our favorite cafés when George noticed a guy staring from a nearby table. He was maybe a couple of years older than us, with wavy brown hair and wide-set gray eyes. When he realized he’d been caught, he came over and introduced himself as Alan Thomas, a student at the local university. He apologized for staring and explained that it was because he couldn’t take his eyes off Bess.

That kind of thing happens to Bess all the time, so I didn’t pay much attention. She’s not the type of girl who gets swept off her feet by just anybody.

But apparently Alan wasn’t just anybody. He’d taken her on a romantic picnic for their first date, and the two of them had been together ever since. It was nice to see Bess so happy, even if I secretly thought Alan was a little goofy and overly excitable. George thought so too, though with her it wasn’t such a secret.

“Need some help with those, buddy?” Alan asked as James returned for Bess’s bags. “I can give you a hand. Should I just toss it there on top of Nancy’s suitcase?”

“It’s quite all right, sir,” James replied. “Your entire party is in the Hollywood Suite, right? Just leave your luggage here and we’ll take care of it. You might want to head over to the check-in line so you can start enjoying all the fine amenities of the
Arctic Star
.”

Alan nodded agreeably. “This is so amazing,” he said to no one in particular as we headed toward the end of the line. “I never thought a poor college student like me would be taking an Alaskan cruise!”

He wasn’t the only one. Just a few short days ago, I’d been wondering what I was going to do with myself for the next month while Ned was off being a camp counselor and my dad was busy with a big case. River Heights is kind of sleepy at the best of times. This summer? It was downright catatonic.

Then Becca Wright had called, sounding frantic. That was my first clue that my summer was about to change. See, Becca is just about the
least
frantic person I’ve ever known. Just a couple of years out of college, she’d already landed the plum job of assistant cruise
director for the maiden voyage of the
Arctic Star
, the flagship vessel of brand-new Superstar Cruises. Having known Becca for years, I was sure that was mostly due to her work ethic and friendly, upbeat personality. Although I’m sure it didn’t hurt that her grandfather had been a bigwig executive at the venerable Jubilee Cruise Lines. He’d retired a few years back, but he still knew just about everyone in the business.

So why the frantic call? Some suspicious things were happening at Superstar Cruises, and Becca was afraid someone might be up to no good. Naturally, that made her think of me. See, my thing is solving mysteries. Big ones. And small ones, like the case where I’d first met Becca, which had involved finding her family’s runaway dog. And everything in between.

So which kind of case was this? I wondered, glancing up again at the gleaming white ship looming over the dock. Was someone really out to mess with Superstar Cruises like Becca seemed to think? Or was it just new-job jitters and a little bad luck?

“Earth to Nancy!” Alan waved a hand in front of
my face, grinning. “You look a little nervous. Not worried about getting seasick, are you?”

“Nope.” I smiled back at him. Real mystery or not, I was glad that Becca had called. My friends and I were about to set out on the all-expenses-paid cruise of a lifetime!

The four of us joined the line waiting to board, which was growing with every passing second. George stood on tiptoes, hopping from one foot to the other as she tried to see how many people were in front of us.

“Hey, shouldn’t there be a special VIP line or something?” she complained. “I mean, we’re in the Hollywood Suite! We shouldn’t have to wait in line with everyone else.”

“Yeah.” Alan chuckled. “Plus, we’re contest winners! That should count for something, right?”

“Um, the line’s moving pretty fast. I’m sure we’ll be aboard soon,” I said quickly. The last thing we needed was for Alan to start blabbing to the ship’s employees about the whole contest-winner thing. Mainly because it wasn’t true.

Bess shifted her handbag to her other shoulder and pulled out a packet of paperwork. “Does everyone have their tickets and passports handy? Nancy?”

“Why are you looking at me?” I said. “I’m not
that
forgetful, even when I’m—” I caught myself just in time, swallowing the last few words:
even when I’m investigating a case
. “Um, even when I’ve just crossed a couple of time zones,” I finished lamely, shooting a look at Alan.

Luckily, he wasn’t paying attention. He was digging into the pockets of his Bermuda shorts.

“Uh-oh,” he said. “I think I left my passport in one of my bags. I’d better go grab it before they load it onto the ship.”

He rushed off, disappearing into the throng of passengers, porters, and bystanders on the dock. George watched him go with a sigh.

“Okay, this is already getting old,” she said. “Shouldn’t we just let him in on the secret already? Alan’s a huge goody-two-shoes nerd—I’m sure we can trust him not to tell anyone we’re really here to solve a mystery.”

“Shh,” I cautioned her, glancing around quickly.

I ignored their bickering, realizing I didn’t have to worry about anyone overhearing us at the moment. A red-haired young man had just arrived at the dock, and about a dozen other people, from little kids to an old woman with a walker, were pushing and shoving and laughing loudly as they all tried to fling themselves at him at once. Almost every single one of them had bright red hair and freckles.

“Brilliant deduction, detective.” I grinned at her, then turned to George. “We can’t tell anyone why we’re really here,” I reminded her quietly. “Not even Alan. We promised Becca, remember? Besides, we’ve really only known Alan for a few weeks.”

“Oh, please.” Bess shook her head. “What do you think he’s going to do? Call the
New York Times
so they can publish all your clues?”

“No, of course not.” I glanced over my shoulder to make sure Alan wasn’t returning yet. “But he’s not exactly Mr. Introvert. We don’t need him blurting out something at the wrong time, even by accident.”

“Whatever.” George didn’t look entirely convinced. “Guess we’d better talk about the case while we can, then. What’s your plan?”

“The first thing I need to do is talk to Becca,” I said. “All she told me on the phone was that there’d been a few troubling incidents in the couple of weeks leading up to this cruise, including some threatening e-mails or something. Oh, and the Brock thing, of course.”

Bess sighed dreamily. “I can’t believe we almost got to be on the same cruise ship as Brock Walker!”

“No, we didn’t,” I said. “That’s why Becca called us in to help, remember? According to her, Brock Walker was supposed to put the ‘superstar’ in Superstar Cruises. I guess that’s their gimmick—passengers being able to rub elbows with superstars. So when he canceled less than five days before departure, she
knew it was bad news. Then when she heard it was because someone was sending threatening e-mails to his family . . .”