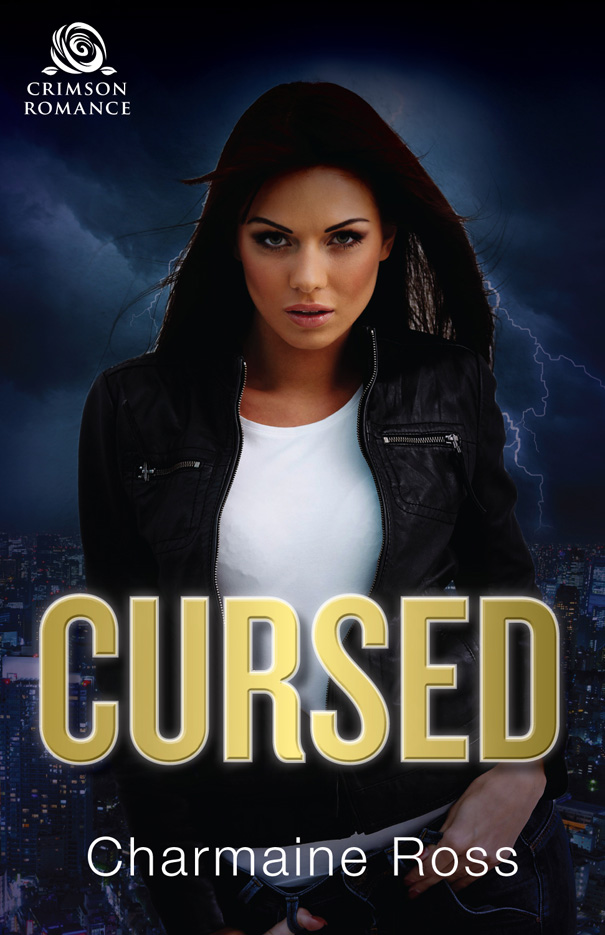 To Buck Rogers—who, when I was ten, made me want to live in the future.

I wish to personally thank the following people for their contributions to my inspiration and other help in creating this book: Crimson Romance, which is immensely dedicated and supportive of their authors—this book would not have been possible without the support and encouragement of Tara and Julie from Crimson Romance and the editing help of Lauren; my husband who has never read a word of my books but who consistently leaves me alone to bury my head in a computer, a screen, or a book and takes the kids on a bike ride, much to their consternation; my parents who help me to succeed with praise, understanding, faith, and proofreading; Café Abitza—without their excellent coffee and access to electricity, I could not have written half of this book; and finally, my readers who enjoy my stories—if not for you, I wouldn’t be here doing what I love doing.

Thanks
for reading
Cursed
. I hope you enjoy it.

Thank you for purchasing a Crimson Romance novel. Please sign up for our
[weekly newsletter]
for information on new releases, contests, discounts and more.

Blistering flames. Acrid smoke. Heat stung my skin. Fumes clogged my throat. I was on hands and knees, dragging in each breath, knowing my body would give out at any moment.

And there was nowhere else I’d rather be.

I don’t know how or why it was here, but it was a godsend. I whispered a prayer of appreciation to whatever deity had thought to start the bushfire. Even it was just a flippant, toss-away thing for an almighty, I was thankful.

The flames sent plumes of writhing brown smoke into the sky. My father’s buildings were just beyond the line of flames. So damn close I could taste their desecration, but then the fire headed away from them, turned by a strong wind. I’d waited my life for an opportunity like this, and I wasn’t going to let it slide.

This was my chance to end the hell I’d been living in for years. It was kill or be killed. Both sounded good.

I clutched the trunk of a gum tree, using it to get to my feet. A wave of giddiness overpowered me. I waited it out. I leaned against the trunk, breathing deeply, the bark prickling into my back. Sweat beaded my face and trickled down my spine.

I willed the thought-energy into myself and drew it into my core. I don’t know what to call the energy. It might be my life force. It might be universal energy. I’d had it for as long as I could remember. A gift from my father. My curse and now my savior.

This was what my father—Victor—wanted from me. This was why I’d been left in the middle of the bush for weeks, starving, slowly dying. So he could see how strong I was. How long I could keep on living in these conditions. It was his right, he told me. Years ago, he’d taken me in when there was no one else. A sick child. Too much work for prospective parents when other, healthier children could be adopted. At least he’d named me: Katia.

He’d spent years searching for me after I ran away, and I had to pay for that, too. He said it was the least I could do. That was eight years and several lifetimes ago, before they’d found me and brought me back. It had slowly destroyed me, but I’d resisted him. The nightmares of what he’d made me do when I was a child still woke me at night, sweating and screaming and believing I was still that helpless fourteen-year-old again.

Well, I’d show him just what I could do now. Now it was on my terms, and the only people who were going to die this time were the ones who deserved it.

The energy pulsed through my body. It was living, throbbing, vying for life. It screeched through my limbs, spiked my veins. I gritted my teeth, fighting unconsciousness, letting the pain of a thousand needles prick me from the inside. I invited the pain, let the energy feed on it. This was the buildup of eight years of depriving myself. Eight years of letting my energy lie dormant. Letting it rest and build and grow strong. I wasn’t a naive, weak teenager anymore. I was twenty-four and stronger.

I pried open my eyes, concentrated on the acrid flames. I called the energy from my blood, balled it into my core until it was all I could feel. All I knew. All I was. Then, when it was almost too much for me to restrain, I pushed it from my body, out toward the flames. They exploded, soaring upward until they blocked out the blue of the sky.

For a moment, I thought it hadn’t worked, that I had depleted myself for nothing. Then there was a shift in direction of the flames. They danced and flickered, letting off black smoke at the moving tips, as though they were thinking for themselves. And despite the direction of the wind, the flames moved, charging toward the buildings—that hell on earth. Flames descended, obliterating and destroying. There was a lot to destroy in this area of the Toolangi State Forest.

I laughed. My legs gave out. I sank into the dirt, so dry it spiraled around me and clogged my throat. I closed my eyes, felt a smile on my mouth as I welcomed death. At last, I had ended the nightmare.

The voice came from a tunnel. Muted. Like I was hearing it over a bad, long distance telephone line. It sounded surprised. That was strange. I thought they’d be ready for me here. I couldn’t smell the smoke, so I guessed I’d made it into the next world. I drifted back into the soft, black abyss.

I felt rough hands on me pushing hard on my chest. It hurt. I wanted to drift into the blackness again. It was warm there. Nothing could hurt me. I was safe.

A sting on my neck. Burning in my veins. The voice was yelling. I didn’t think angels yelled. At me? No. I heard other voices. Indistinguishable urgent mumbles. People. More than just one. A group.

Thoughts tumbled through my mind and pooled in an untidy heap. Was I in Heaven? My recollection of what I’d heard about Heaven was that it was a pretty nice place to go. In those years where I existed on the street, Heather would tell me, “Katia, you’ll love it there. The sky is a beautiful cloudless blue, and there are green fields full of wildflowers, and you are always happy. There is no sadness or pain. You can do whatever you want to do.”

She often glossed over the way in which I would get there. I guess she didn’t know either. We were both kids. Something about being good, but that didn’t ring true to me anymore. No one we knew was good.

I knew that you were sad when other people went to Heaven, which was pretty much a contradiction. If it was a place you wanted to go, then you should be happy that someone actually got there.

I told Heather Heaven would be warm. It was much better than those freezing nights when the cold bit into your bones as sharp as a knife and there was nowhere warm you could go, no one you could turn to because that would get you into trouble—bad, bad trouble.

Something wrapped around my arm and was pulled tight, pinching my skin. There was a sting in the crook of my elbow. Ice through my veins.

“Wake up.” Warm breath enveloped my ear. The voice was gentle and insistent. Nice. But I didn’t want to listen to it.

I shook my head. A mistake. Pain seared somewhere in the middle of my brain. My stomach recoiled. I wanted to sink into the black again. I liked it there. The ice was taking me away from it.

My heart raced. A force pulsed through my veins, pushing through arteries that opened wide and greedy, waking every pore, every cell back to life. Like I was born all over again, and it was hell.

My mouth opened and sucked in air in a coarse, noisy gasp. My back arched upward and lifted my body high. My arms flopped outward like a sacrifice, opening ribs, expanding lungs. Pain sliced into every sinew. I didn’t want to breathe. Didn’t want to move. Why couldn’t I just stay dead? It was nice there.

Someone uttered, “Holy shit. She’s alive.” There was silence, except for the noise my lungs made when I sucked in a struggling breath. But my body was too heavy. I gagged, choking for air now. Suffocating. My body not responding. Why the hell wake me when I was perfectly happy being dead in the abyss? I dove back down.

“Give her another shot.”

More ice flowed into my arm. The blackness gave way to gray shadows. This wasn’t what I wanted. No warmth now. I was cold. Freezing. I hated the cold. My body ached, heavy, limbs were useless. I couldn’t move. My head throbbed.

Snow White didn’t wake up this way. Heather had always said I looked like Snow White. Raven dark hair, white skin, blue eyes. She used to say she liked the way I looked, but Heather was romantic. Why didn’t I live like Snow White? Where was
my
prince?

“That’s a girl. Wake up,” The soothing voice was back in my ear.

A wave of anger shattered the black into a thousand splinters. I wanted to go back, and he wasn’t letting me. The least he could have done was ask me if I wanted to wake up. I would have told him no, leave me alone. I liked being left alone.

I was sick of the chasing. The hiding. Nowhere to go. No one to turn to. No friends. No Heather. Gone. Years ago now, but the pain was still raw. Then Victor caught me. After years of hiding, he’d found me. A rage, strong and deep, tore through my mind. He caught me, and I didn’t want to be caught. Fucking bastard.

I screamed in my mind and then realized that I was screaming out loud.

“You gave her too much.”

“No. It seems she went to sleep like this, and she’s waking up the same way. That happens with anesthesia patients sometimes.”

I opened my eyes. Brilliant light seared painfully. Everything was blurry, muddled and bright, way too bright. I breathed like I had run a mile in a second, in and out of my nostrils. I clenched my teeth so I could stop the screaming, stop them chattering because of the cold. I hated people hearing me scream. I’d learned not to. It only goaded them on.

A face came into my vision, unfocused. I made out tanned skin, brown hair, brightness for the eyes, dark for the mouth. I wanted to punch him, but my arm disobeyed my order and stayed limp by my side.